Accessibility links
VIDEO: See Comet Pan-STARRS Dragging Its Tail Through Space : The Two-Way The comet's now putting on a show in the Northern Hemisphere's night sky. Using its orbiting observatories, NASA captured a stereo view from space that offers a unique perspective.

A Stereo View From Space

NASA used images from two orbiting observatories to create this video of the comet Pan-STARRS. It appears in the middle, its tail streaming away to the right. At left, solar wind streams away from the sun and Mercury moves higher. At right, Earth is stationary.

Comet Pan-STARRS is putting on a bit of a show for those in the Northern Hemisphere through the end of this month. We're seeing some beautiful photos, such as those taken this week by AFP/Getty's Stan Honda. He pointed his camera skyward near Magdalena, N.M.

The best viewing came earlier this week, but Forbes writes that if you're in the Northern Hemisphere you're not too late to see Pan-STARRS. It offers some tips:

"In order to view the comet, you'll need to find a spot where you have an unobstructed view of the western sky, all the way down to the horizon. Try to get away from cities so you don't have to deal with light pollution, and cross your fingers for clear weather, because clouds will block the show. Wait until about half an hour after sunset, and then look towards the west [and to the left of the moon]. ...

"Pan-STARRS will remain in our night sky through the end of the month. Each night it will appear slightly higher in the sky, and further to the east. But don't wait too long to get your glimpse: As March draws to a close, the light from the comet will get dimmer and dimmer. If you have a good pair of binoculars or a decent telescope, that will help."

What caught our eye today is a view of Pan-STARRS from space. NASA used its STEREO (Solar TErrestrial RElations Observatory) to produce a video of PanSTARRS that combines two orbiting perspectives.

Here's how the space agency describes what it has created:

"In early March 2013, Comet Pan-STARRS became visible to the naked eye in the night sky in the Northern Hemisphere, appearing with a similar shape and brightness as a star, albeit with a trailing tail. Up in space, NASA's STEREO (Solar TErrestrial RElations Observatory) has an even better view. This movie, captured by the STEREO-B spacecraft on March 9-12, shows the comet and its fluttering tail as it moves through space. The stationary planet on the right is Earth, and the moving planet on the left is Mercury. The material moving in from the left is solar wind streaming off the sun, which is out of view on the left. Comet scientists say the tail looks quite complex and it will take computer models to help understand exactly what's happening in STEREO's observations."

How did Pan-STARRS get its name? Space.com says it comes from how it was discovered in June 2011, "by astronomers using the Panoramic Survey Telescope & Rapid Response System (Pan-STARRS) in Hawaii. The comet's official name is C/2011 L4 (PANSTARRS)."

Space.com also offers "6 Fun Facts About Comet Pan-STARRS," including this: 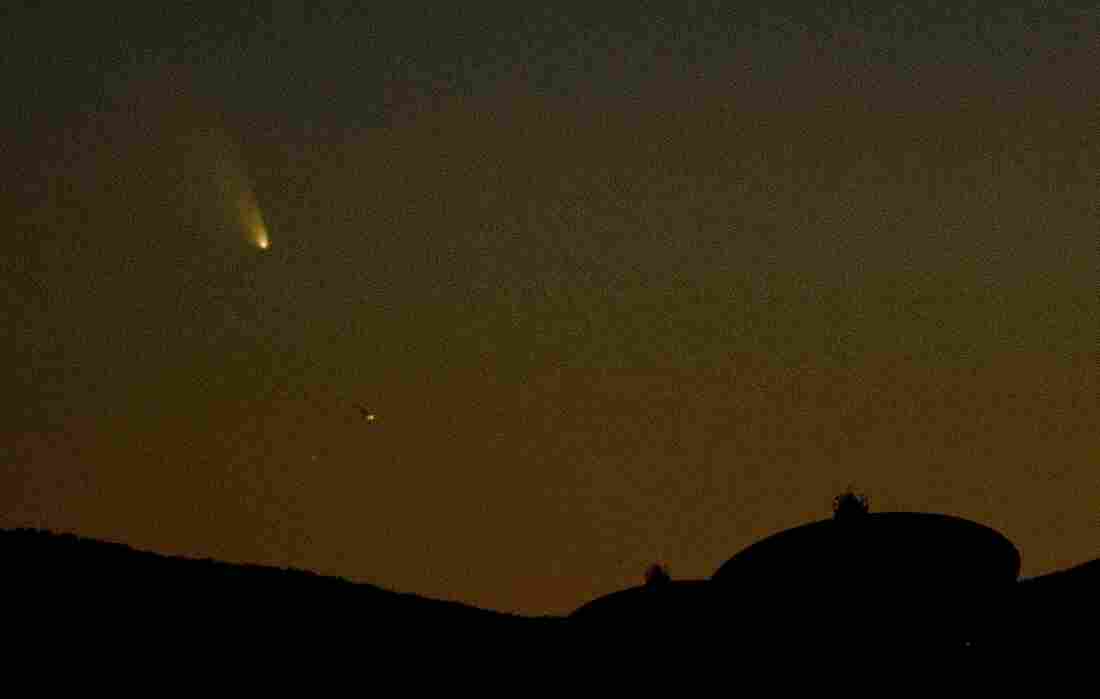