Accessibility links
Stalker Who Inspired 'The Natural' Dies; Lived Real Life In Obscurity : The Two-Way Ruth Ann Steinhagen was 19 when she shot Eddie Waitkus, a Philadelphia Phillie. She had been obsessed with him, and lured Waitkus to a Chicago hotel room. Initially judged to be insane, she was never tried. For about 60 years, she lived a quiet life in Chicago. 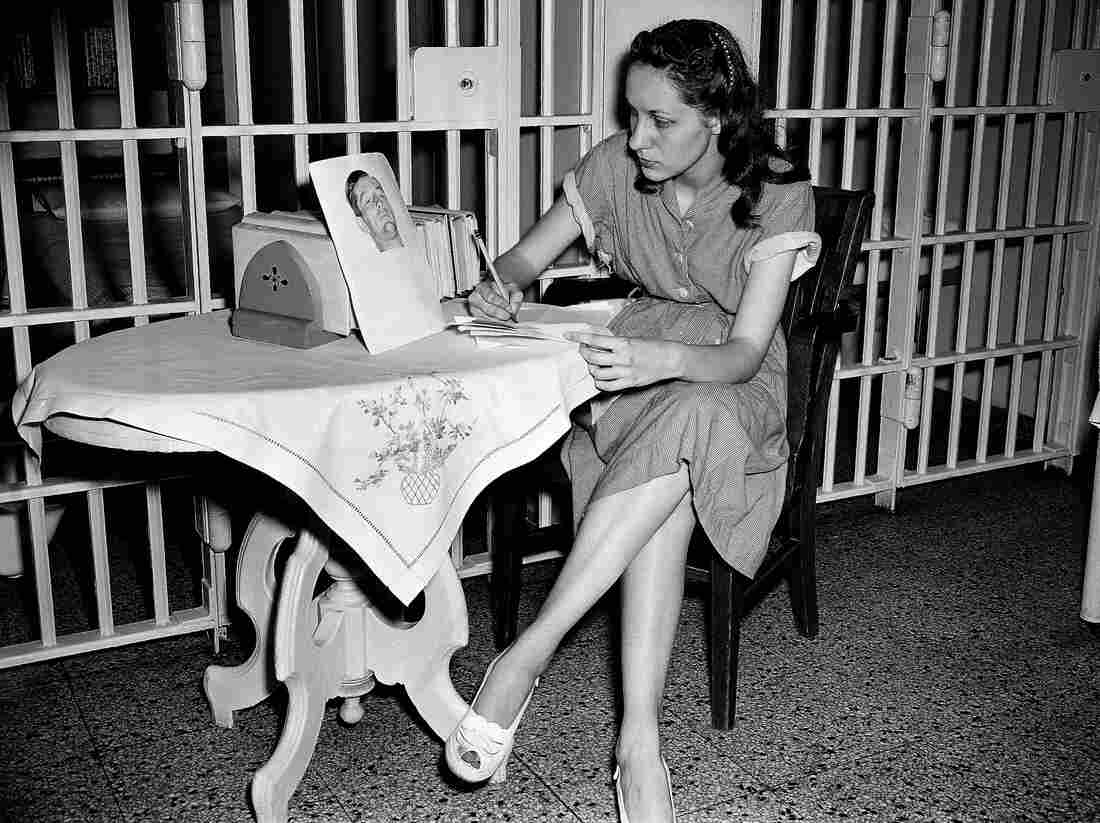 Ruth Ann Steinhagen, then-19, in the Cook County Jail after she shot Philadelphia Phillies first baseman Eddie Waitkus in 1949. On the table: a photo of Waitkus taken in the hospital where he was recovering from his bullet wound. The story of his shooting was the inspiration for Bernard Malamud's novel The Natural. Steinhagen died this past December. /AP hide caption

Though we've seen The Natural many times, we have to confess we didn't know that a real woman shot a real baseball player in 1949 and that their story inspired Bernard Malamud's 1952 book and Robert Redford's 1984 movie.

But over the weekend, obituaries appeared about Ruth Ann Steinhagen, 83, who "disappeared into near obscurity" as the Chicago Tribune says and died last Dec. 29 with little notice.

It wasn't until the Tribune was searching records for another story that it discovered the one-time "femme fatale" had died.

The Associated Press recaps Steinhagen's real-life crime, which happend when she was 19, this way:

"The story began with what appeared to be just another young woman's crush on Eddie Waitkus, the Chicago Cubs' handsome first baseman. So complete was this crush that the teenager set a place for Waitkus, whom she'd never met, at the family dinner table. She turned her bedroom into a shrine to him, and put his photo under her pillow.

"After the 1948 season, Waitkus was traded to the Philadelphia Phillies — a fateful turn. "When he went to the Phillies, that's when she decided to kill him," [author John] Theodore said in an interview.

"Steinhagen had her chance the next season, when the Phillies came to Chicago to play the Cubs at Wrigley Field. She checked into a room at the Edgewater Beach Hotel where he was staying and invited him to her room.

" 'We're not acquainted, but I have something of importance to speak to you about,' she wrote in a note to him after a game at Wrigley on June 14, 1949.

"It worked. Waitkus arrived at her room. After he sat down, Steinhagen walked to a closet, said, 'I have a surprise for you,' then turned with the rifle she had hidden there and shot him in the chest."

Waitkus — like Redford's character — survived. He would go on to play again the next season and and all or part of five more seasons after that. He died in 1972.

Steinhagen was judged to be insane and spent nearly three years in a state hospital where she "underwent electroconvulsive therapy to alter the chemical balance in her brain, as well as hydrotherapy and occupational therapy," the Tribune writes. Eventually considered to be cured, she was released and never tried for the shooting. Steinhagen settled in with her parents and a sister on Chicago's Northwest side. Over the years, the parents and sister died. It isn't known for sure if Steinhagen held any type of job. She never spoke publicly about the shooting, according to the Tribune.

According to the newspaper, "she died Dec. 29 at Swedish Covenant Hospital of a subdural hematoma caused by an accidental fall in her longtime home, a Cook County medical examiner spokeswoman said."

In the movie, the femme fatale was played by actress Barbara Hershey and her character commits suicide after shooting Redford's character, Roy Hobbs. The year isn't 1949 in the reel version of the story — it's the 1930s. And Hobbs isn't an established major leaguer like Waitkus when he's shot. He's a young phenom — "the natural" — who has his best years robbed from him, but returns 15 years later to lead the "New York Knights" to the top of the standings. There's much more to the plot, of course: A bat with a lightning bolt; and old love who comes back into Hobbs' life; a son he never knew about; an evil team owner.

The climax comes when Hobbs hits a long home run into the stadium lights (supposedly in New York City but actually filmed at Buffalo's since-demolished War Memorial Stadium). With lights exploding, he rounds the bases.

NPR's Robert Siegel and Bob Goldsborough of the Chicago Tribune: What happened to Ruth Ann Steinhagen?

Bob Goldsborough, the Tribune obituaries writer who discovered that Steinhagen had died and then filed the story that has spread to other news outlets, told All Things Considered host Robert Siegel this afternoon that it was largely because of Waitkus that she was never put on trial.

After Steinhagen's release from the state hospital, Goldsborough said, Waitkus had "no interest ... in seeing her tried or seeing her prosecuted." So, "prosecutors dropped the case and made her a free woman."

Once she was back in Chicago, Steinhagen lived a quiet life. "She was scarcely seen in her neighborhood" for 60 years, Goldsborough said. "She kept as low a profile as she could."

We'll add the as-broadcast version of Robert's conversation with Goldsborough to the top of this post later today. Click here to find an NPR station that broadcasts or streams the show.