Accessibility links
Obama Nominates Thomas Perez For Labor Secretary : The Two-Way Perez would replace Hilda Solis and if confirmed, become President Obama's only Hispanic cabinet member. He is currently in charge of civil rights at the Justice Department. 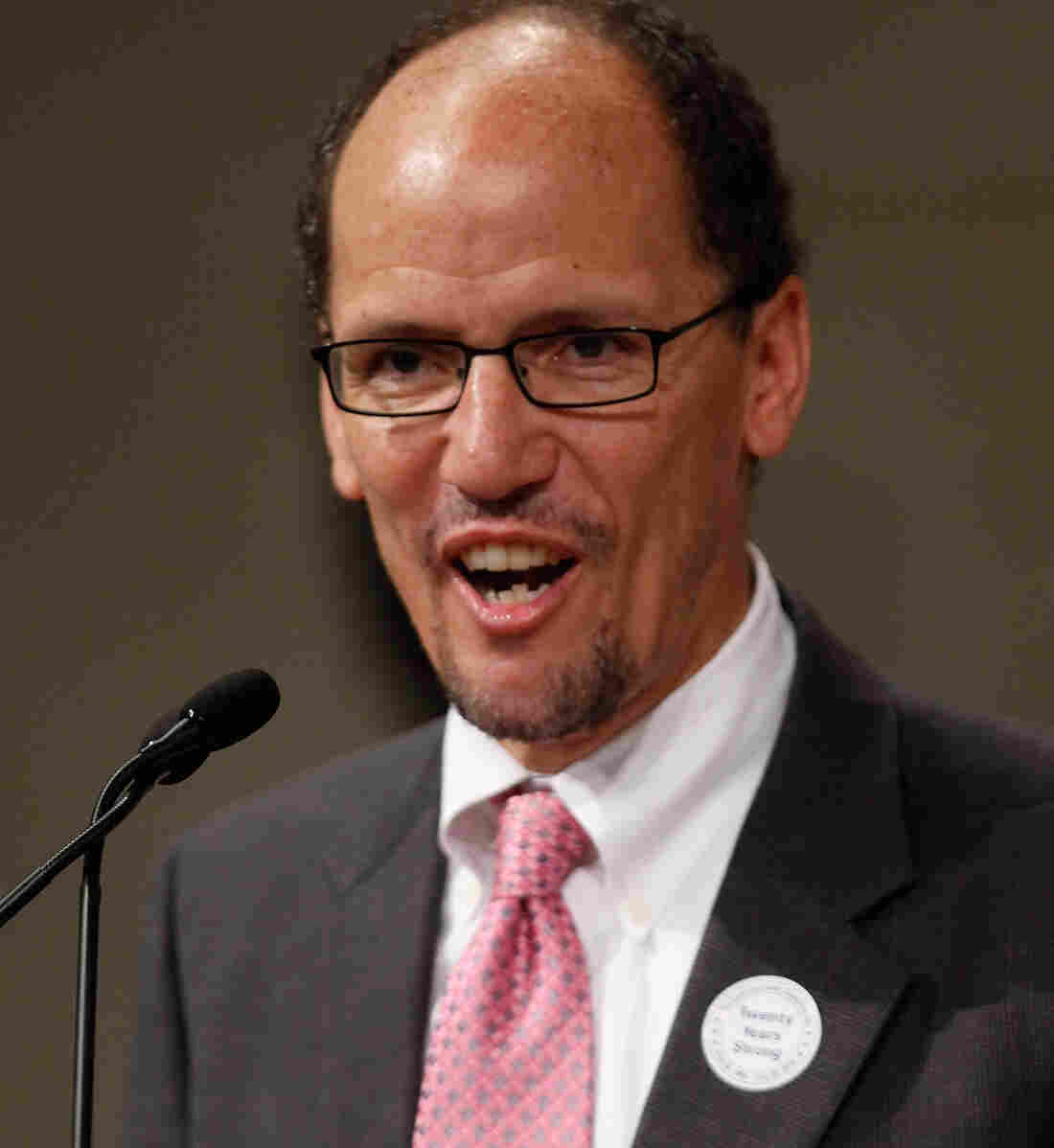 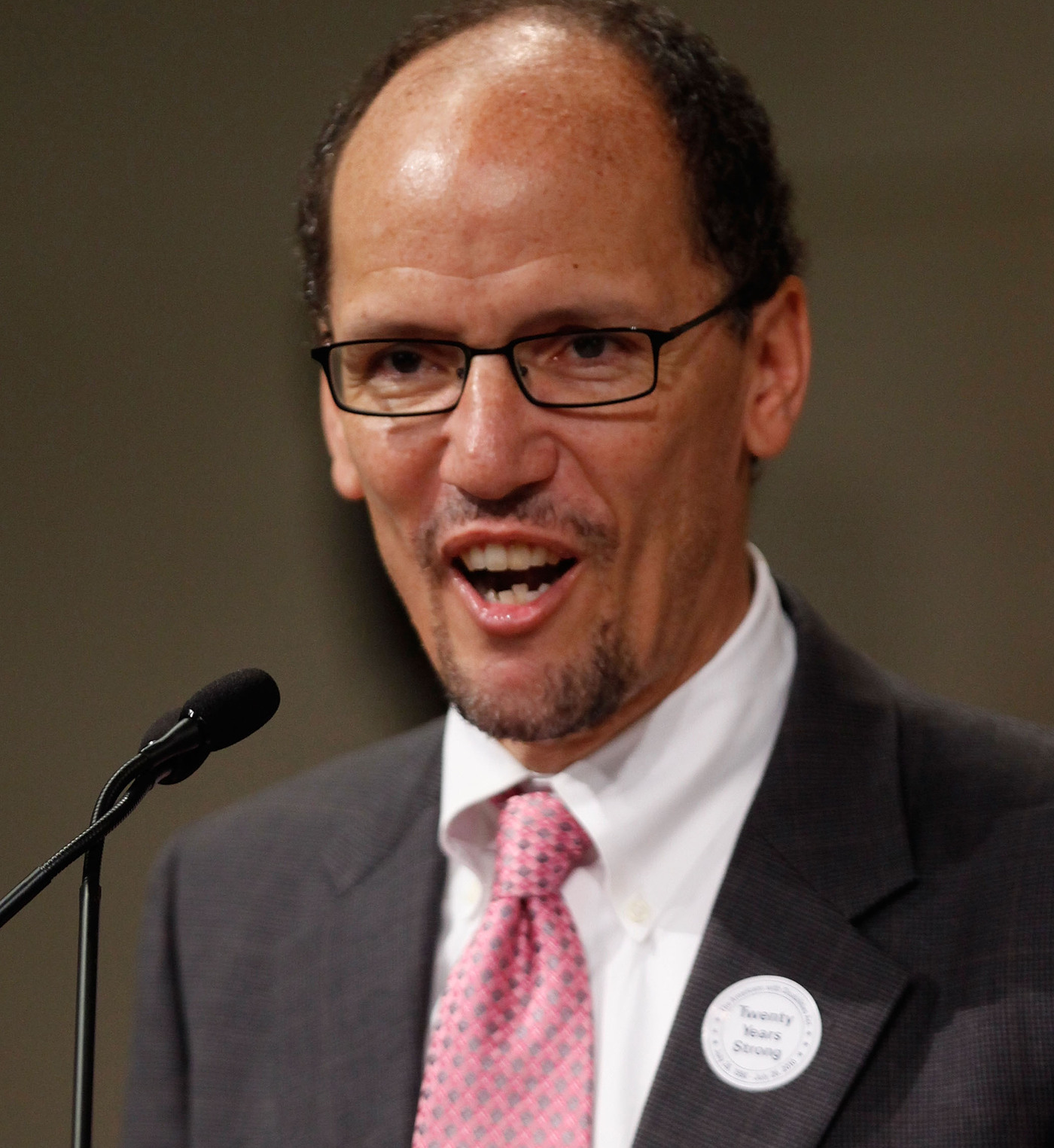 President Obama announced today he is nominating Thomas Perez, currently in charge of civil rights at the Justice Department, to be the country's next Labor secretary.

Introducing him in the East Room of the White House, Obama said Perez "knows what it's like to climb the ladder of opportunity," and has been "consensus builder."

Perez worked to become the first lawyer in his family. He knows first hand, Obama said, that if you work hard in United States, you can accomplish great things.

"Tom's made protecting that promise for everyone the focus of his life," Obama said and he will continue to do that as the country's next labor secretary.

If his nomination is confirmed by the Senate, Perez will replace Hilda Solis, the former California congresswoman, who became the first Hispanic to hold the office.

Perez, the son of immigrants from the Dominican Republic, thanked the president for his support in Spanish.

He said that at this point in American history, the Labor Department plays a "critical" role.

The New York Times has a bit more on Perez:

"Liberals and labor leaders have hailed Mr. Perez, calling him a strong champion for workers and those who have faced discrimination. While at the Justice Department, he has pursued a record number of discrimination or brutality claims against local police and sheriff's departments, including that of Joe Arpaio, the outspoken sheriff in Maricopa County, Ariz., who was accused of "a pattern of unlawful discrimination" against Latinos.

"Mr. Perez also challenged voter identification requirements imposed by South Carolina and Texas, and his division reached the three largest residential fair lending settlements in the history of the Fair Housing Act. Under him, the voting section participated in the most new litigation in the last fiscal year than in any previous year."

As we've reported, Perez's nomination comes just days after the Justice Department's inspector general issued a scathing report about the civil rights division. As NPR's Carrie Johnson wrote, it found the unit, "suffers from 'deep ideological polarization' and a 'disappointing lack of professionalism' including leaks of sensitive case information, harassment and mistreatment among colleagues who have political differences..."

As for Perez, Carrie reported:

"The new inspector general report said Perez was not personally involved in one of the most contentious incidents – involving a decision to drop charges against a defendant affiliated with the New Black Panther Party for allegedly intimidating Philadelphia voters on Election Day 2008. But the report criticizes Perez for testimony before the U.S. Civil Rights Commission 'that did not reflect the entire story,' with watchdogs concluding that Perez should have asked his colleagues for more details about the episode. Perez testified the department's political leadership was not 'involved' in deliberations about the case and its handling but emails and other materials indicate two political appointees gave advice and one performed edits. Perez told watchdogs in an interview that he didn't think that meant 'involvement.'"