Accessibility links
FBI Says It Knows Who's Behind Biggest Art Museum Heist In History : The Two-Way In 1990, men dressed as police officers made off with 13 art pieces valued at up to $500 million. They included two Rembrandt oil paintings. The FBI is asking for help in locating them. 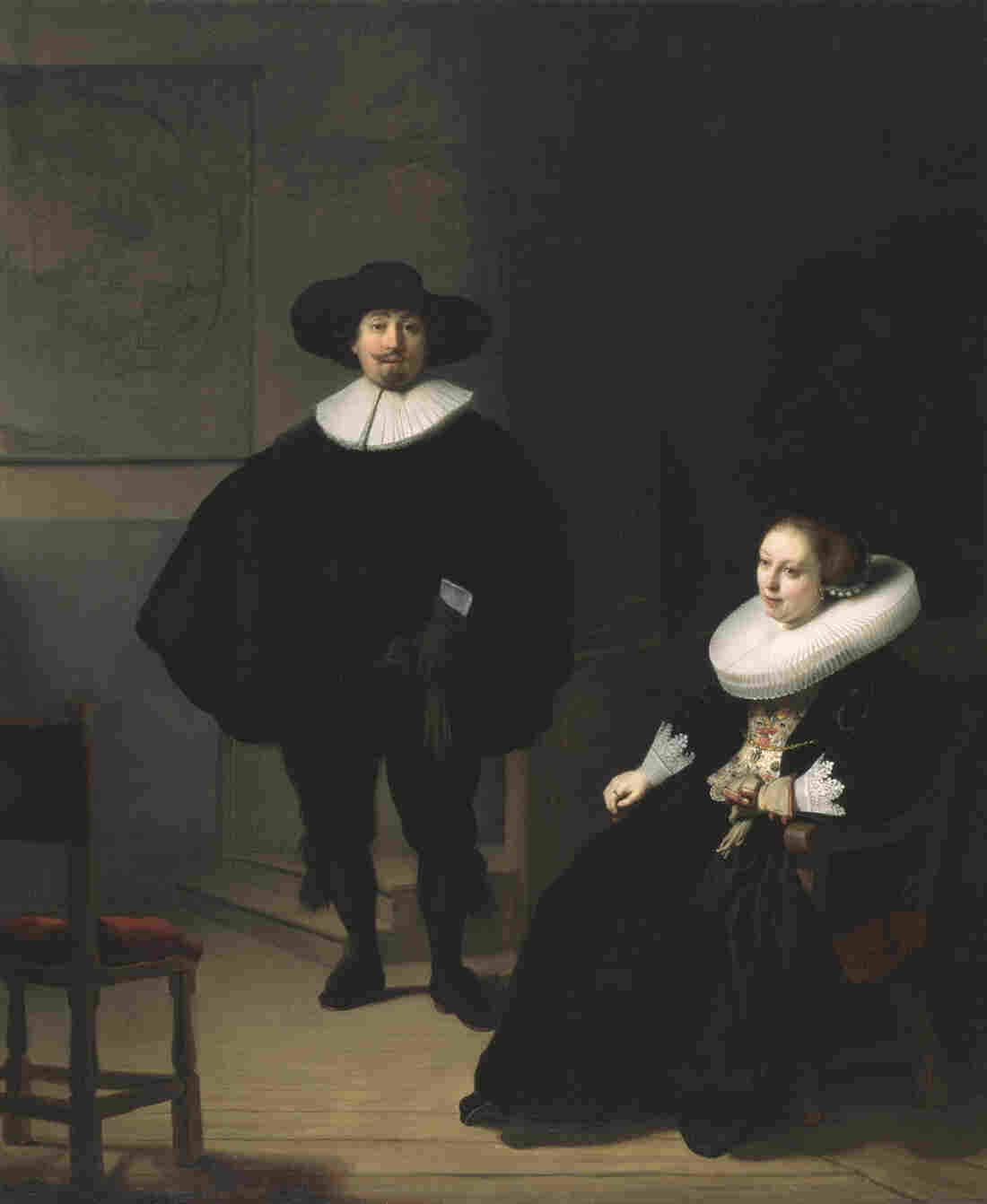 Rembrandt, A Lady and Gentleman in Black, 1633. Oil on canvas, 131.6 x 109 cm. Inscribed at the foot: Rembrandt.ft: 1633. This monumental work hung in a prominent spot in the Dutch Room, visible through its windows overlooking the court. Rembrandt completed this work in his second year in Amsterdam in 1632. FBI hide caption 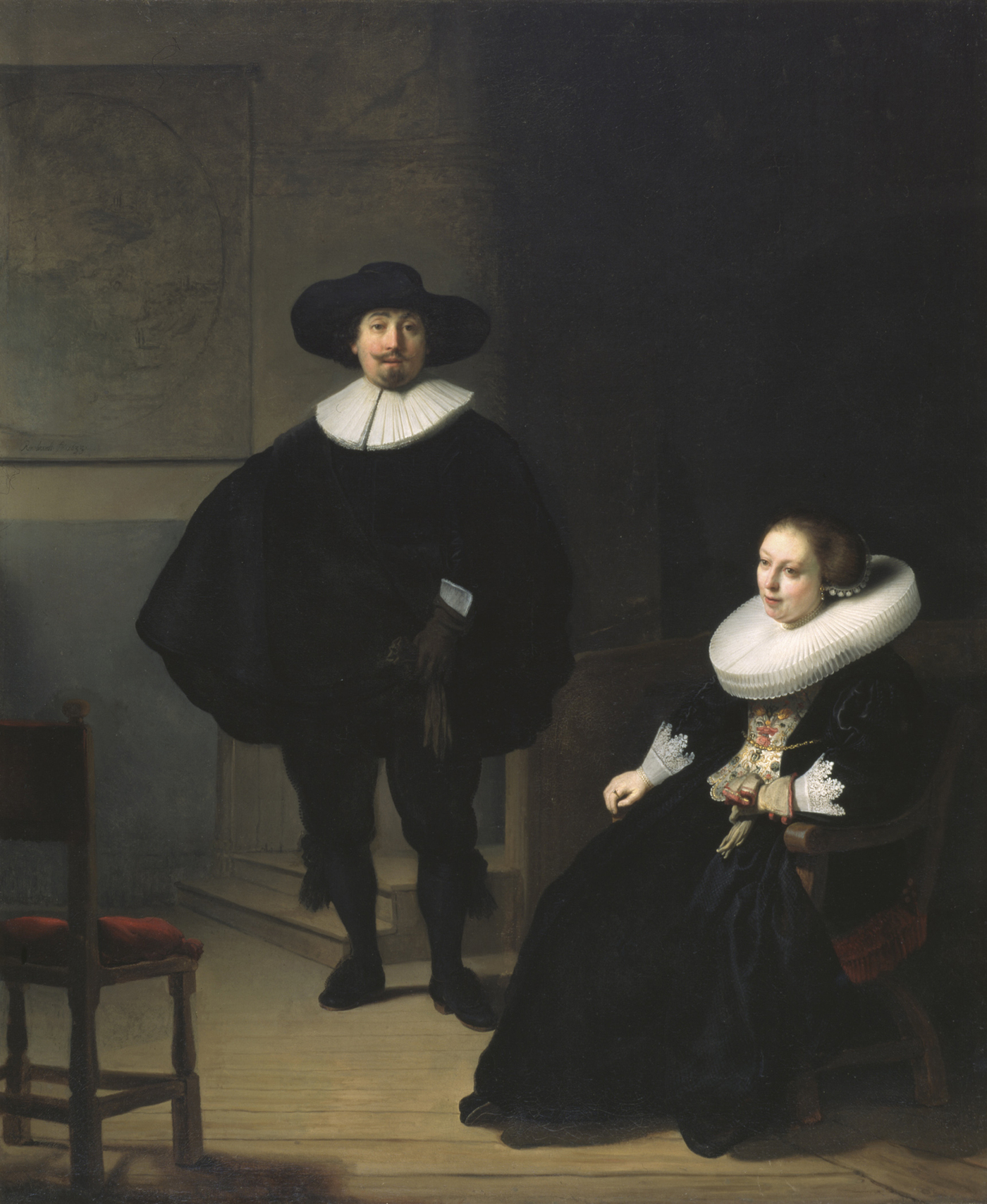 Rembrandt, A Lady and Gentleman in Black, 1633. Oil on canvas, 131.6 x 109 cm. Inscribed at the foot: Rembrandt.ft: 1633. This monumental work hung in a prominent spot in the Dutch Room, visible through its windows overlooking the court. Rembrandt completed this work in his second year in Amsterdam in 1632.

The FBI says it believes it knows who perpetrated the biggest art museum heist in history.

In a press release issued today, the FBI said it is seeking new leads on a theft that took place in 1990 at the Isabella Steward Gardner Museum in Boston. As The New York Times explains, the thieves were let into the museum in the early morning hours because they were dressed as police officers.

They tied up the two guards on duty and made off with 13 items in 81 minutes. "Included were two large Rembrandt oil paintings that were cut from their frames; single works by Vermeer, Manet and Govaert Flinck; five Degas sketches, and three other items, among them a small etching by Rembrandt," the Times reports.

The total potential sales value? Anywhere from $300 million to $500 million.

"The FBI believes with a high degree of confidence that in the years after the theft, the art was transported to Connecticut and the Philadelphia region, and some of the art was taken to Philadelphia, where it was offered for sale by those responsible for the theft." Richard DesLauriers, special agent in charge of the FBI's Boston office, said in a press release. "With that same confidence, we have identified the thieves, who are members of a criminal organization with a base in the Mid-Atlantic states and New England."

The problem is that they don't know where the art is at the moment and they want to bring publicity to it outside of Boston, hoping it'll bring some results. The last time the FBI launched a publicity campaign this big, they netted Whitey Bulger. The FBI is planning on purchasing space on digital billboards in Philadelphia and they want to remind people that the Gardner is still offering a $5 million reward.

The museum clarified that that the reward is for "information that leads directly to the recovery of all of our items in good condition."

"You don't have to hand us the paintings to be eligible for the reward," Anthony Amore, the museum's chief of security, said in a statement. "We hope that through this media campaign, people will see how earnest we are in our attempts to pay this reward and make our institution whole. We simply want to recover our paintings and move forward. Today marks 23 years since the robbery. It's time for these paintings to come home."

The frames that held the stolen works remain empty.

The FBI has put together a page with photographs of all of the stolen pieces.

Ulrich Boser, author of The Gardner Heist, says the FBI has had a list of suspects for a long time. He tells Melissa Block, host of All Things Considered, that the bureau thinks Boston mobster David Turner and his friend George Reissfelder were involved. The statute of limitations, however, has long passed.

"David Turner is currently in prison for armed robbery; George Reissfelder is dead," Boser says. "The paintings have probably moved through a number of hands, if not some hands beyond them."

Boser says he doesn't believe Turner knows where the paintings are now. "If he knew ... he would try and use them as a 'get out of jail free card,'" he says.

You can listen to the rest of their conversation at the top of this post.