Accessibility links
World Baseball Classic's All-Caribbean Showdown Is A Winner Either Way : The Two-Way The Dominican Republic and Puerto Rico will face off in tonight's championship game. Both teams distinguished themselves throughout the tournament, not only with great baseball, but great fun-loving, hip-swaying and plantain-waving passion, as well.

World Baseball Classic's All-Caribbean Showdown Is A Winner Either Way

World Baseball Classic's All-Caribbean Showdown Is A Winner Either Way 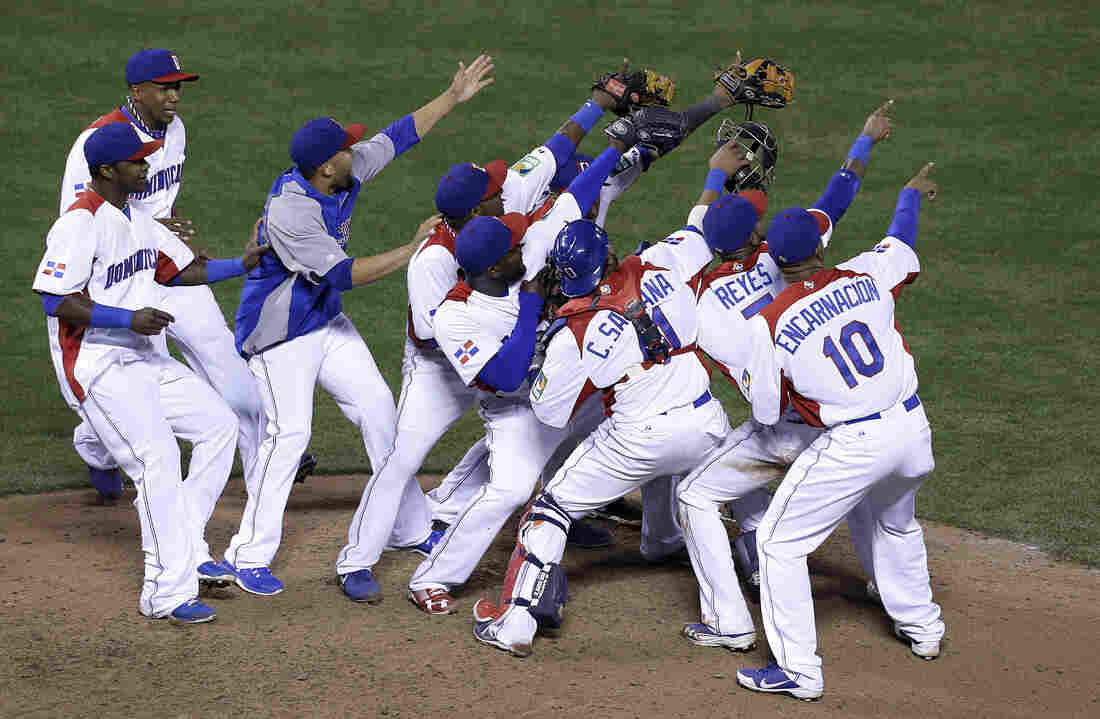 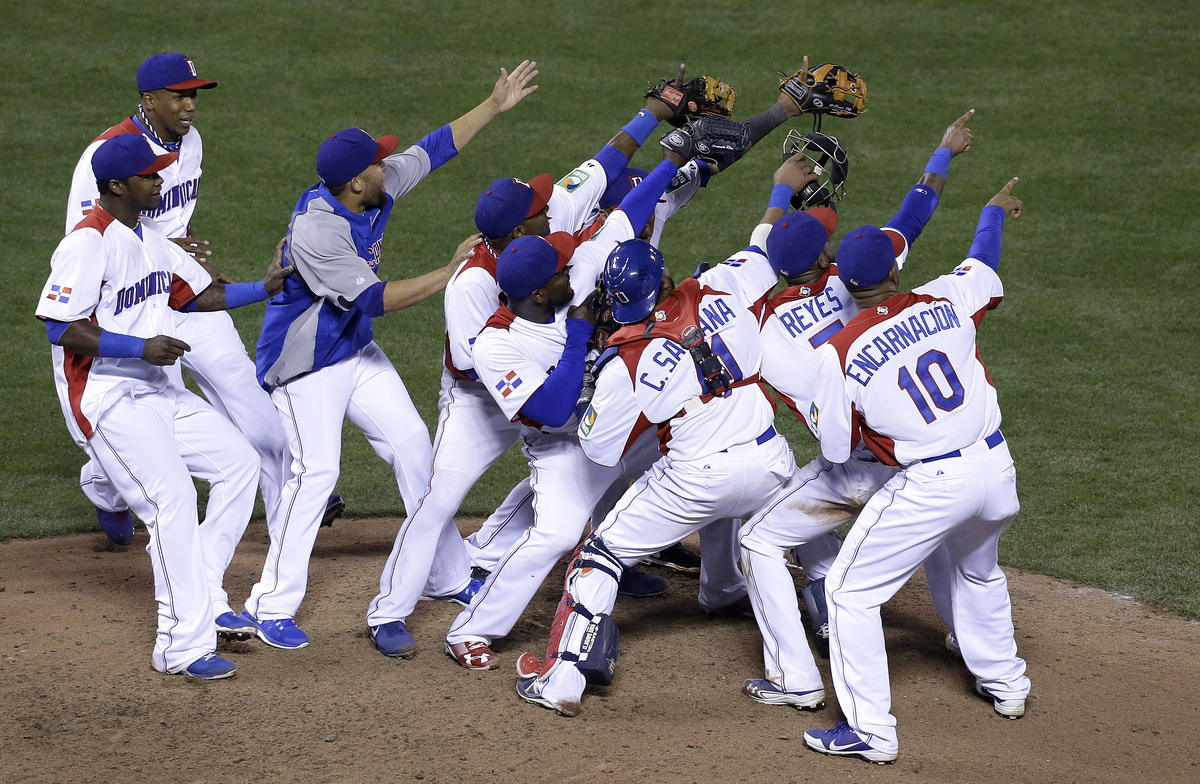 The Dominican Republic celebrates after beating the Netherlands 4-1 in Monday's semifinal game of the World Baseball Classic in San Francisco.

NPR's Tom Goldman is covering the World Baseball Classic tournament and sends along this report:

Tonight's championship game of the World Baseball Classic is certain to produce a dramatic image after the last out. One of the two teams — either the Dominican Republic or Puerto Rico — will leave the field at AT&T Park in San Francisco with heads bowed. There might be tears.

How strange that will be, after both teams distinguished themselves throughout the Olympic-style tournament not only with great baseball, but great fun-loving, hip-swaying, plantain-waving (more on that coming right up) passion, as well.

Many Americans have ignored and even belittled the WBC for not being real baseball. Of course it didn't help that Team USA flamed out before the title game, as it has in all three World Baseball Classics.

But Teams D.R. and P.R. were simply on fire as they set very different courses to tonight's showdown. The Dominicans were dominant, and are one win away from becoming the first team in the WBC's short history to take the title without losing a game. Puerto Rico was all pluck, as it won three elimination games in five days, taking down baseball giants USA and Japan in the process.

And here they both are, full of momentum and fun.

The biggest goof goes to Dominican ace relief pitcher Fernando Rodney, whose sense of humor is as cockeyed as his baseball cap, which never sits straight on his head. Monday was Rodney's 36th birthday, and he celebrated by unveiling his "good luck platano," during introductions before a game against the Netherlands. He explained later that his family sent the fruit Dominicans love — and it talked to him. 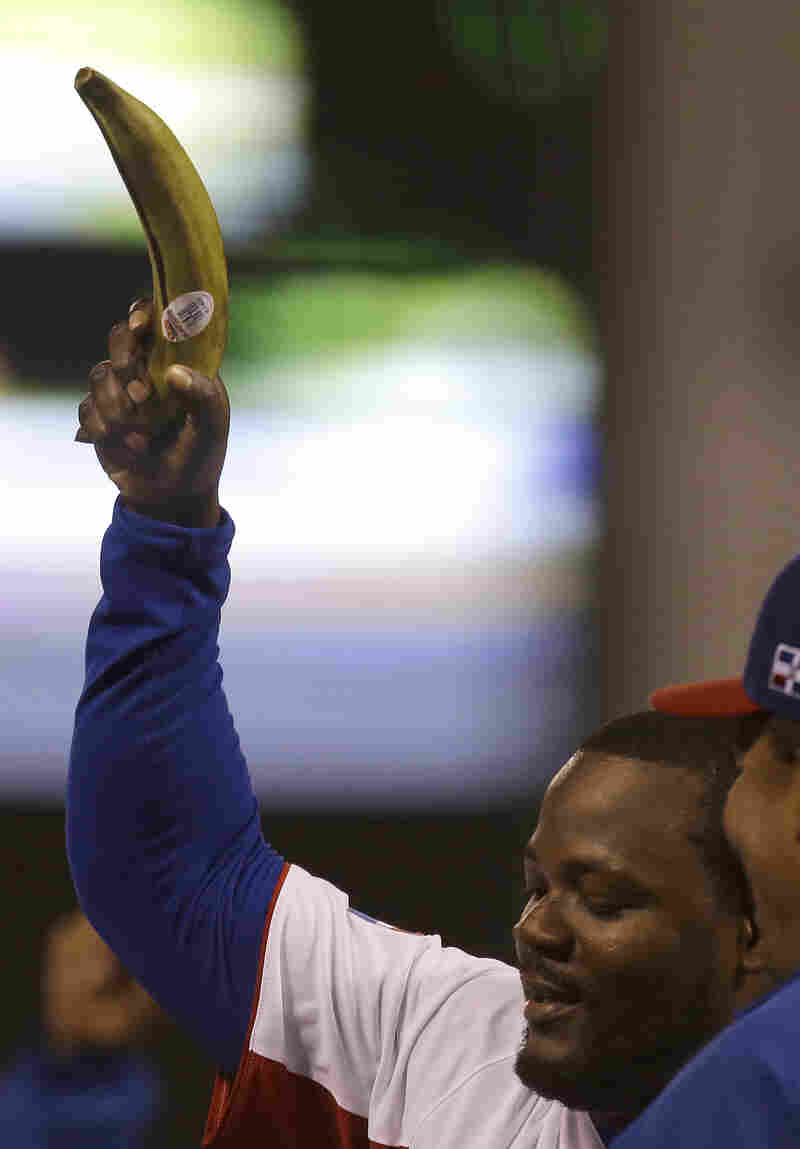 "Platano said if you keep me close, you'll get the win. The plantain gave me luck."

Sure enough, there it was and there he was, whipping the plantain from his waistband and waving it during a fifth-inning rally. The Dominican batters, usually so good, were undisciplined early on — swinging at bad pitches (of which there weren't many by Netherlands' starter Diegomar Markwell).

But in that fifth, they showed the discipline that makes them such a feared lineup. Two straight doubles started an onslaught that ended with team D.R. ahead 4-1. That ended up being the final score.

But Dominican manager Tony Pena sure smiles when he talks about the "incident."

"The thing is that you need to find a way. How [are] you going to lose the stress? How [are] you going to keep a whole group of players laughing and keeping loose," he says. "I got a surprise when I saw Rodney with a banana, a plantain. And I just laughed! Right in the middle of the game, this made everybody laugh. Game like this? You need to find a way to loosen up. And I'm glad that he did it."

Pena was also glad that star second baseman Robinson Cano "stepped forward" and challenged his flailing teammates to stop chasing pitches outside the strike zone, to reclaim the discipline that has made the Dominicans the most feared lineup in the WBC.

What Cano exhibited, Pena says, "will make him a good leader on any ballclub in the future."

Netherlands manager Hensley Meulens appeared to have quite a dilemma on his hands. His mother is "100 percent Dominican," and his father is "100 percent Dutch." So while Meulens technically could have claimed that half of him was happy with the outcome – he said he felt all pain after the game due to his Dutch side.

"I'm proud of our guys," Meulens said of his team that's a unique patchwork of players from the European mainland and the Dutch islands of Curacao and Aruba. "I thanked them for playing with a lot of heart, and we just got beat by a little better team today."

It was another good showing for a country that played its first international baseball game in 1934. With the World Baseball Classic, the Netherlands is moving in the right direction. In 2006, the Dutch team finished 11th; in 2009, it was seventh. This year, it made the Final Four.

The final teams standing play tonight. (The games are being broadcast by MLB.com and ESPN Deportes.) And while the party will end for one of them, it's a fact that the championship game — and this edition of the World Baseball Classic — will be a resounding victory for the Caribbean. Either way.