Accessibility links
Cyprus Lawmakers Reject Unpopular Bailout Plan : The Two-Way A revised plan that would spare small depositors from a one-time tax on savings is being considered. 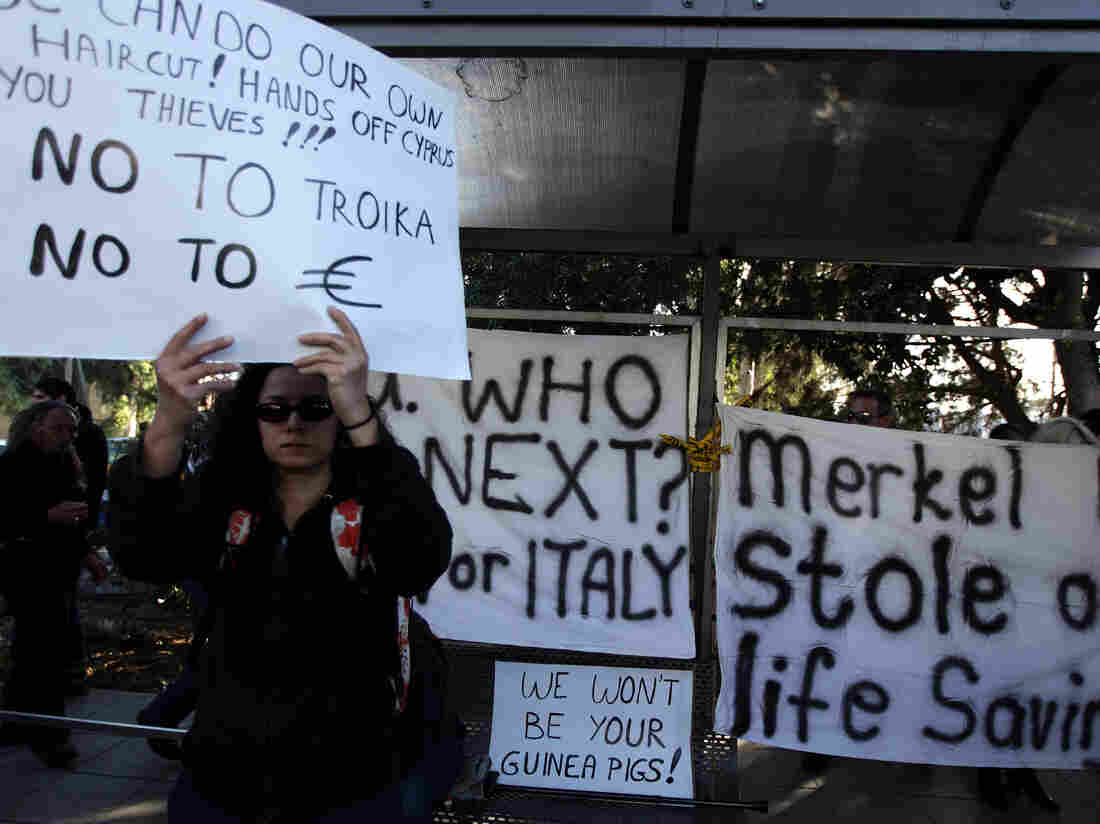 A Cypriot woman holds a sign during a protest against an EU bailout deal outside the Parliament in Nicosia on Monday. Patrick Baz/AFP/Getty Images hide caption 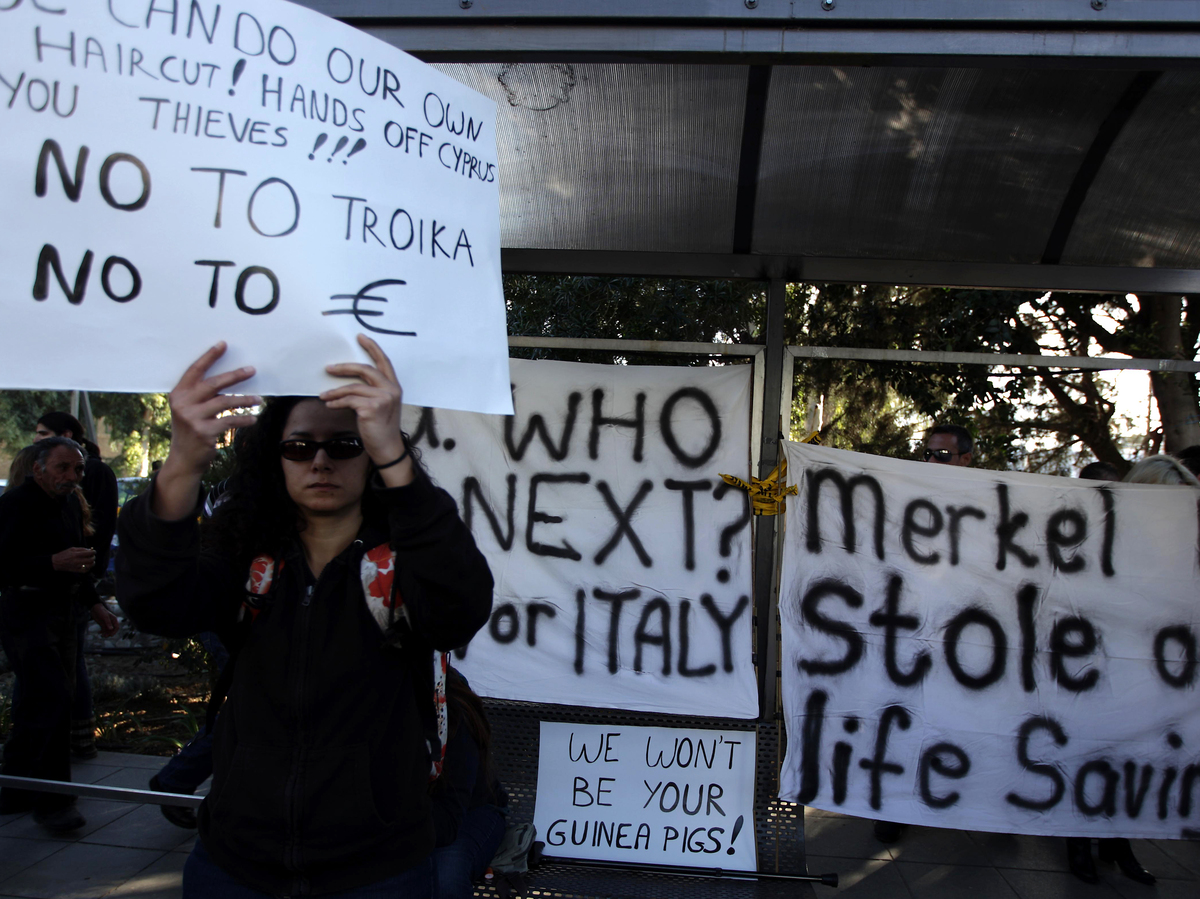 A Cypriot woman holds a sign during a protest against an EU bailout deal outside the Parliament in Nicosia on Monday.

Cyprus lawmakers have rejected the bank tax bill, with zero votes in favor, 36 against and 19 abstentions, after a two-hour debate, The Associated Press and Reuters news agencies report. The bill's rejection throws into doubt the $13 billion international bailout package needed to forestall a default.

John Psaropoulos, reporting for NPR from the capital, Nicosia, says it was clear from the beginning of the debate that the vote would go against the bailout plan proposed by the European Commission, the European Central Bank and the International Monetary Fund.

Besides the plan's hit to hard-earned savings, members of Parliament felt that "the precedent set of a levy on their accounts created the suspicion that it might not be the last one, that the troika of creditors that have proposed this plan might ask for further cuts."

As they left the Parliament building, lawmakers were cheered by a crowd of about 1,000 onlookers, Psaropoulos says.

He said the Parliament hoped now "to reconvene in order to bring forward proposals from the parties in Parliament from a clean slate, not based on the European notion ... but based on Cypriot ideas that do away with any notion of touching the island's financial institutions."

Cyprus' government, hoping for a breakthrough deal with lawmakers on a $13 billion international bailout package, proposed shielding small depositors from a deeply unpopular plan to impose a levy on bank savings.

Hours ahead of an expected vote on the deal in the country's 56-member Parliament, a new draft was being discussed that would spare deposits of less than 20,000 euros. The original plan put forth by the International Monetary Fund and eurozone creditors would have imposed a one-time tax of 6.75 percent. That rate would still apply to deposits between 20,000 and 100,000 euros, with larger amounts to be taxed at a 9.9 percent rate.

The vote was originally scheduled for Monday but was postponed. NPR's Joanna Kakissis says there is talk it could be put off again.

But The New York Times and others report that lawmakers still seem unlikely to approve the deal, the prospect of which has caused panic on the divided Mediterranean island, where people have made a run on the banks. The prospect of the package's being rejected, possibly triggering a messy default for Cyprus that would have wider repercussions throughout the eurozone, has sent shivers through European and international markets.

Kakissis, reporting from Athens, says many ordinary Cypriots stand to lose retirement savings or money for their children's college education if the bailout passes.

"People have already taken pay cuts because of the slowing economy," she says. "[Now] they would lose about 7 percent of their savings because of this tax. They're calling it legalized robbery."

Despite a government-declared bank holiday until Thursday, "people are still running to ATMs, trying to find one that is working, to take out cash," she says.

Moscow also has a deep interest in the outcome in Cyprus, which has become a tax haven for many rich Russians, some hiding ill-gotten gains, and Russian President Vladimir Putin on Monday described the tax levy as "unfair, unprofessional and dangerous."

Speaking from Moscow, NPR's Corey Flintoff says: "Cyprus is to some Russians what the Cayman Islands are to investors from the United States. It's got low corporate taxes, fairly lax regulations. It's easy for Russians to get dual citizenship there.

"So, for all those reasons, Russian banks, business and oligarchs [and] various individuals are believed to have more than $30 billion deposited in Cypriot banks. And because those are big accounts, they would be taxed at almost 10 percent. So, we're talking about a $3 billion Russian haircut here."

Meanwhile Germany, which would cough up a good chunk of the bailout funds, wants the guarantee that the levy on savings represents.

NPR's Soraya Sarhaddi Nelson, reporting from Berlin, says many there feel that Cyprus and other tottering eurozone countries can't expect Germans to open their pocketbooks unless governments and the private sector in those countries agree to fix the corruption and bad management that caused the debt crisis.

Those attitudes have contributed to a north-south divide within the eurozone, with southern European countries such as Italy and Greece feeling they are at the mercy of northern European states that hold their fate.