Accessibility links
We Have Liftoff: Apollo Rocket Engines Pulled From Ocean Floor : The Two-Way Some of the most powerful U.S. rocket engines ever built have been raised from the depths off Florida. The Apollo-era motors are to be restored and put on display. Meanwhile, NASA has pulled unused copies of the same engine out of storage and fired them up as part of its program to build new heavy lift rockets. 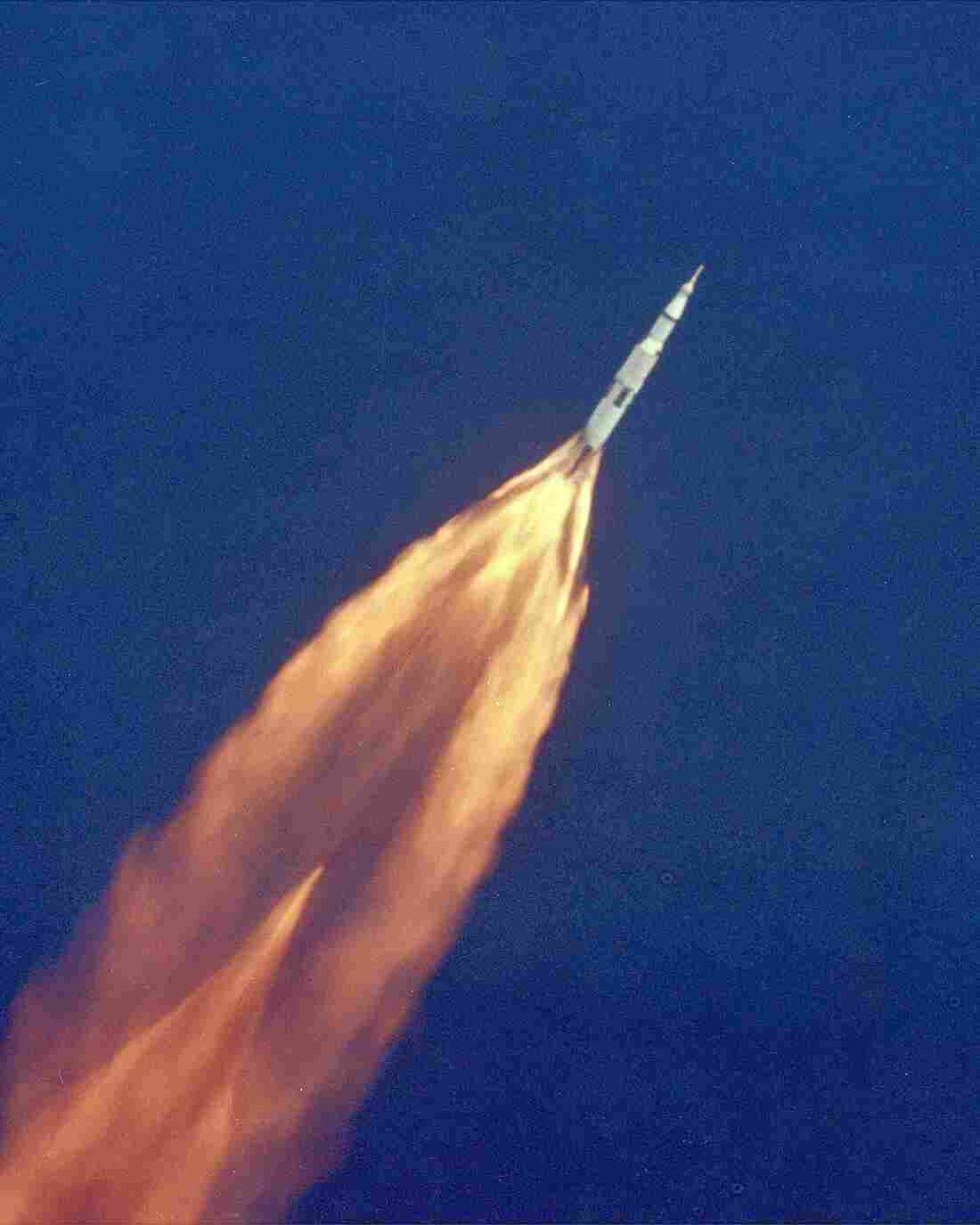 Apollo 11 climbs toward orbit after liftoff on July 16, 1969. In 2 1/2 minutes of powered flight, the S-IC booster lifts the vehicle to an altitude of about 39 miles, some 55 miles downrange. NASA hide caption 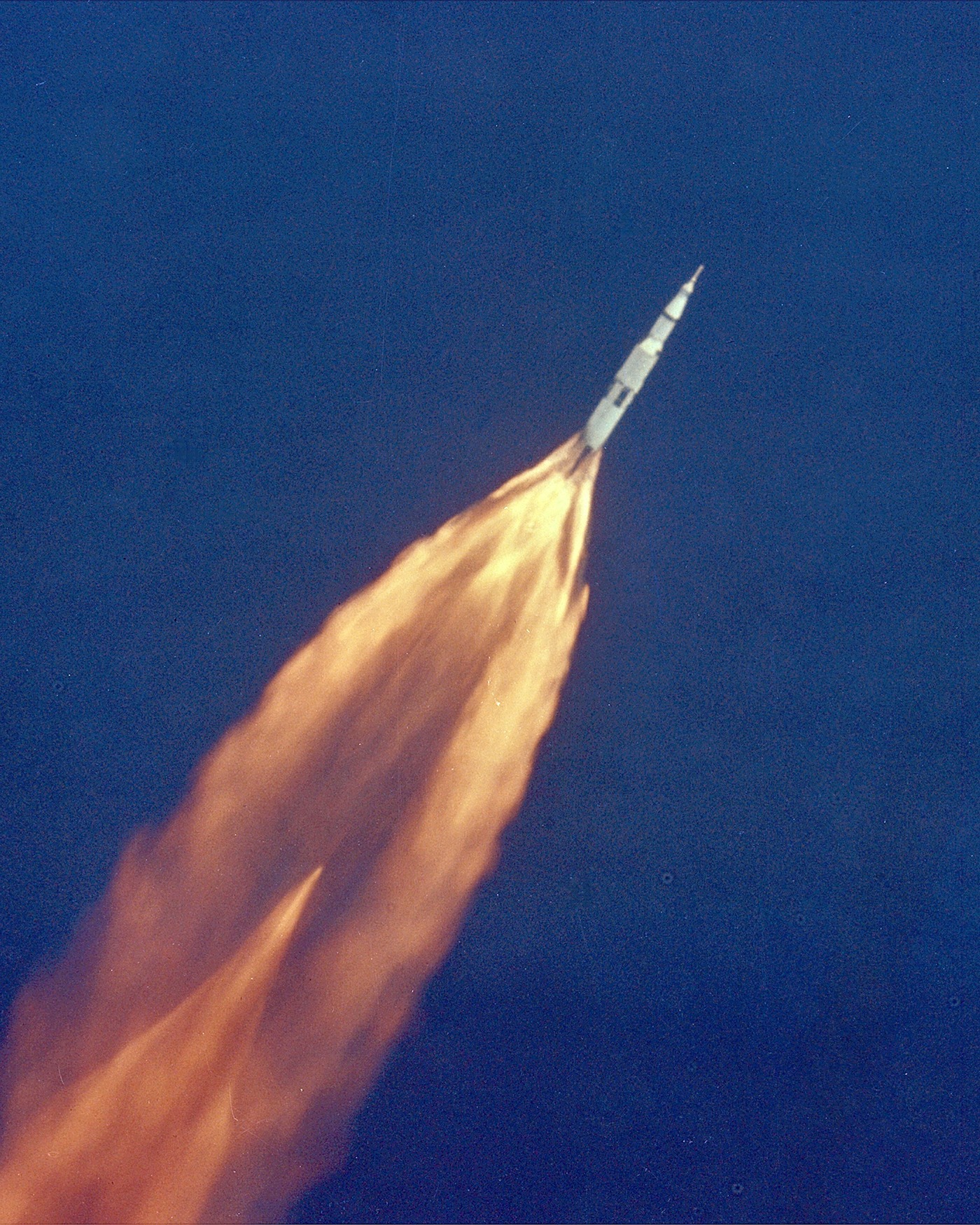 Apollo 11 climbs toward orbit after liftoff on July 16, 1969. In 2 1/2 minutes of powered flight, the S-IC booster lifts the vehicle to an altitude of about 39 miles, some 55 miles downrange.

Rocket engines that may have powered the flight of the first man to walk on the moon have been recovered off the coast of Florida from a depth of nearly three miles beneath the ocean's surface.

Well, parts of some of them have been found and hauled up, according to Amazon billionaire Jeff Bezos. He and an "A-team" of experts were in search of the historic F-1 engines used on Apollo 11. Whether they found them, or engines from another Apollo flight, isn't clear. A forthcoming restoration effort may answer that question.

The Internet entrepreneur shared news of the recovery in a post to the Bezos Expeditions website Wednesday:

We're bringing home enough major components to fashion displays of two flown F-1 engines. The upcoming restoration will stabilize the hardware and prevent further corrosion. We want the hardware to tell its true story, including its 5,000 mile per hour re-entry and subsequent impact with the ocean surface. We're excited to get this hardware on display where just maybe it will inspire something amazing.

Bezos explained his motivation for taking on this complicated project in an earlier post:

The F-1 rocket engine is still a modern wonder — one and a half million pounds of thrust, 32 million horsepower, and burning 6,000 pounds of rocket grade kerosene and liquid oxygen every second. On July 16, 1969, the world watched as five particular F-1 engines fired in concert, beginning the historic Apollo 11 mission. Those five F-1s burned for just a few minutes, and then plunged back to Earth into the Atlantic Ocean, just as NASA planned. A few days later, Neil Armstrong stepped onto the moon.

Millions of people were inspired by the Apollo Program. I was five years old when I watched Apollo 11 unfold on television, and without any doubt it was a big contributor to my passions for science, engineering, and exploration.

After restoration, Bezos hopes to put an engine — still technically NASA property — on display at the Museum of Flight in Seattle.

NASA Administrator Charles Bolden has now released a statement on the Bezos mission.

This is a historic find and I congratulate the team for its determination and perseverance in the recovery of these important artifacts of our first efforts to send humans beyond Earth orbit.

We look forward to the restoration of these engines by the Bezos team and applaud Jeff's desire to make these historic artifacts available for public display.

As it happens, NASA has pulled some unused F-1 engines from the Apollo era out of storage for study as it makes plans to build a new generation of heavy lift rockets. The agency has even fired up an old F-1 on the test stand.

Or, as NASA explains:

... engineers, who have been trained in fields from rocket propulsion to materials science, took apart and refurbished parts from Saturn V F-1 engines — the most powerful American rocket engines ever built. Why resurrect an Apollo-era rocket engine? The answer is simple: to mine the secrets of the F-1 — an engine that last flew before these engineers were born — and use it as inspiration for creating new advanced, affordable propulsion systems.

NASA needs powerful propulsion elements for future launch vehicles, such as the evolved Space Launch System (SLS). The SLS heavy-lift rocket capable of carrying a 130-metric-ton (143-ton) payload is being developed by NASA's Marshall Space Flight Center in Huntsville, Ala. The advanced booster required for the heavy-lift rocket will be competed in 2015. 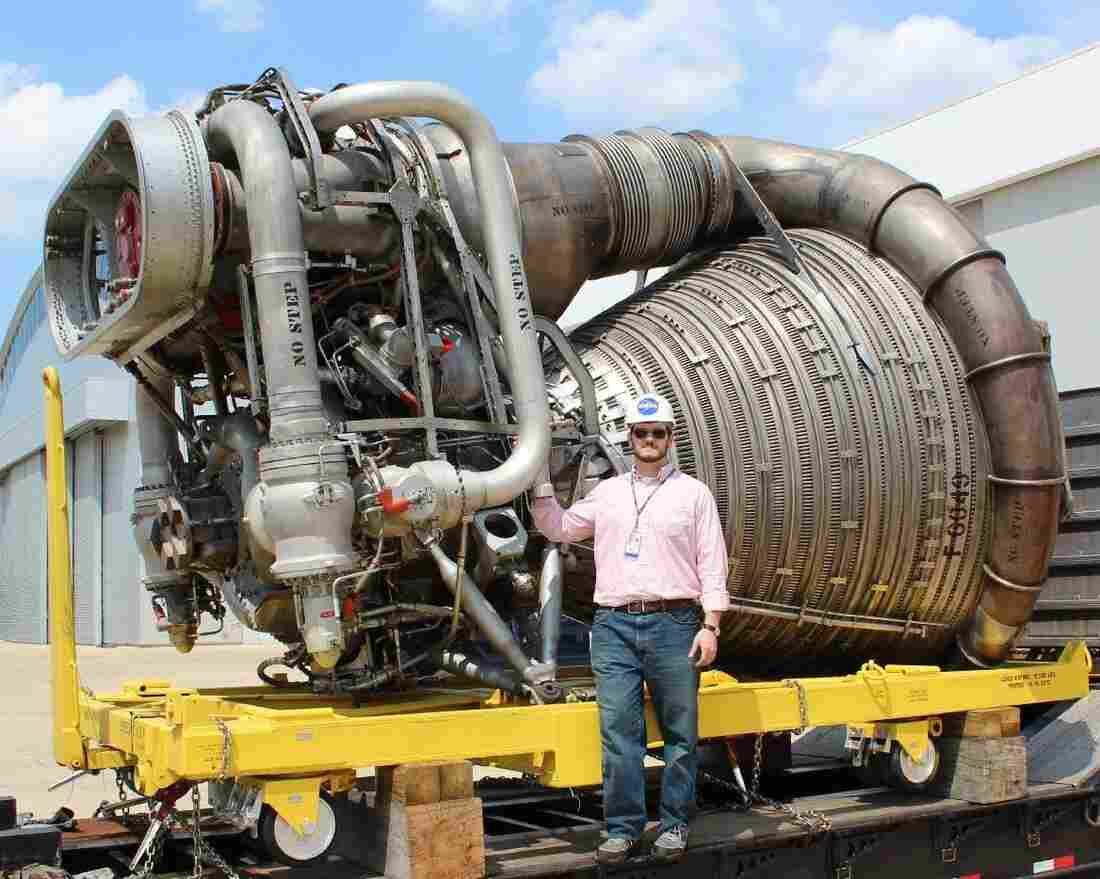 An F-1 engine, originally stored at the Smithsonian National Air and Space Museum in Washington, arrives at NASA's Marshall Space Flight Center in Huntsville, Ala. The engine's pristine condition made its components ideal for refurbishment and testing. MSFC/NASA hide caption 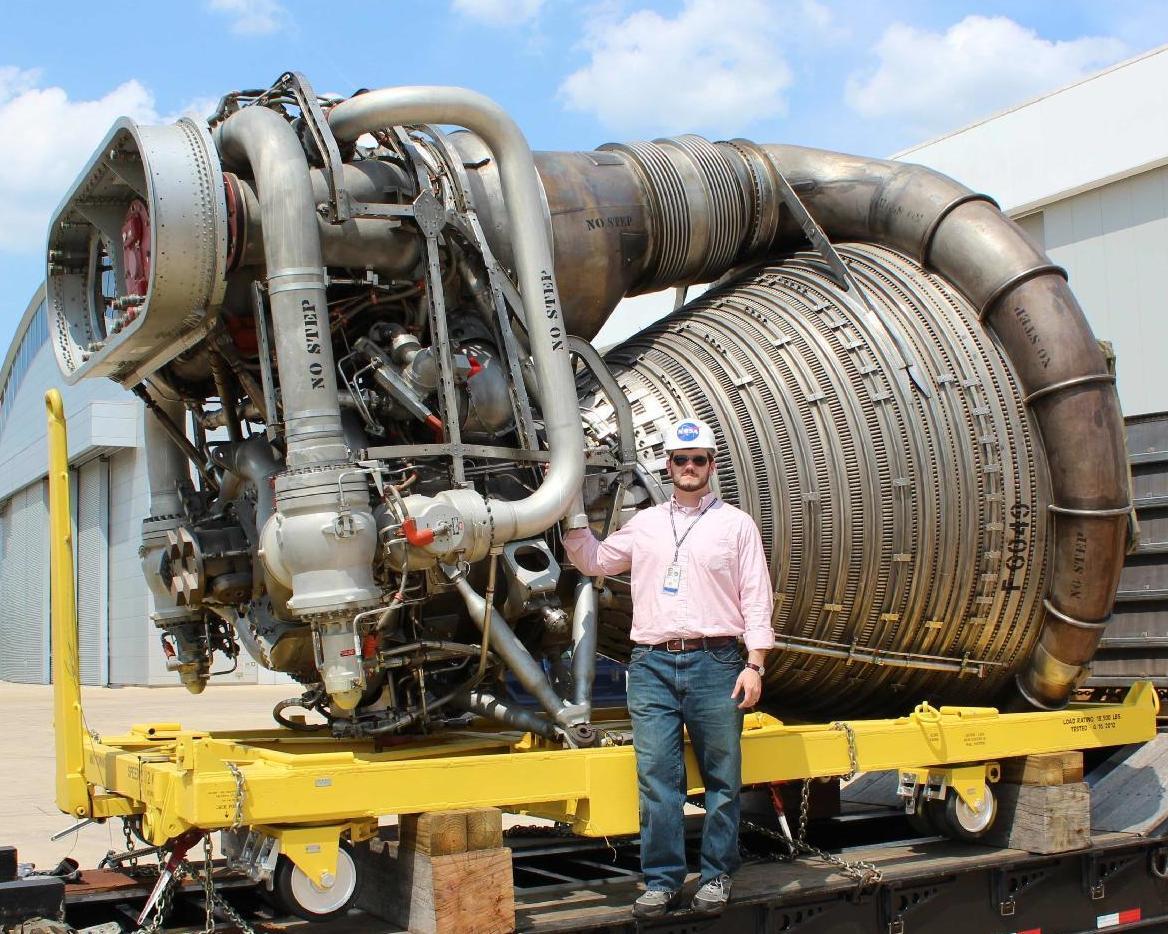 An F-1 engine, originally stored at the Smithsonian National Air and Space Museum in Washington, arrives at NASA's Marshall Space Flight Center in Huntsville, Ala. The engine's pristine condition made its components ideal for refurbishment and testing.