Accessibility links
Obama's Speech In Israel: 5 Excerpts You Should Read : The Two-Way Speaking to Israeli students at the Jerusalem Convention Center on Thursday, President Obama delivered a speech brimming with talk of hope and change that echoed the Obama of 2008.

Obama's Speech In Israel: 5 Excerpts You Should Read 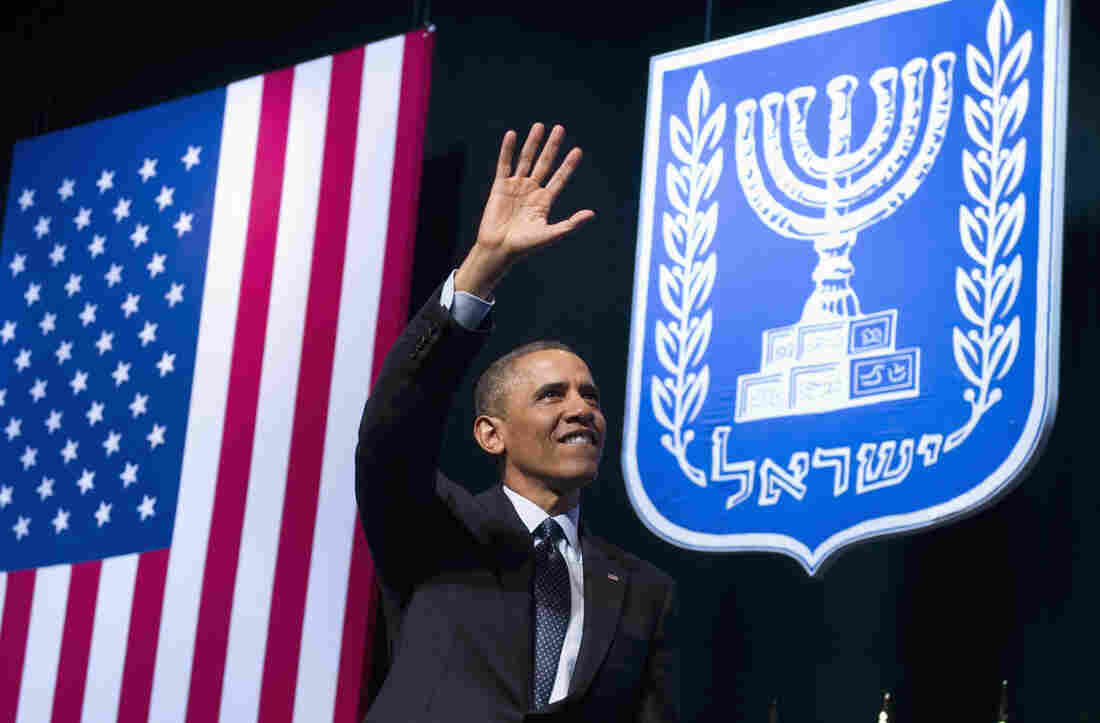 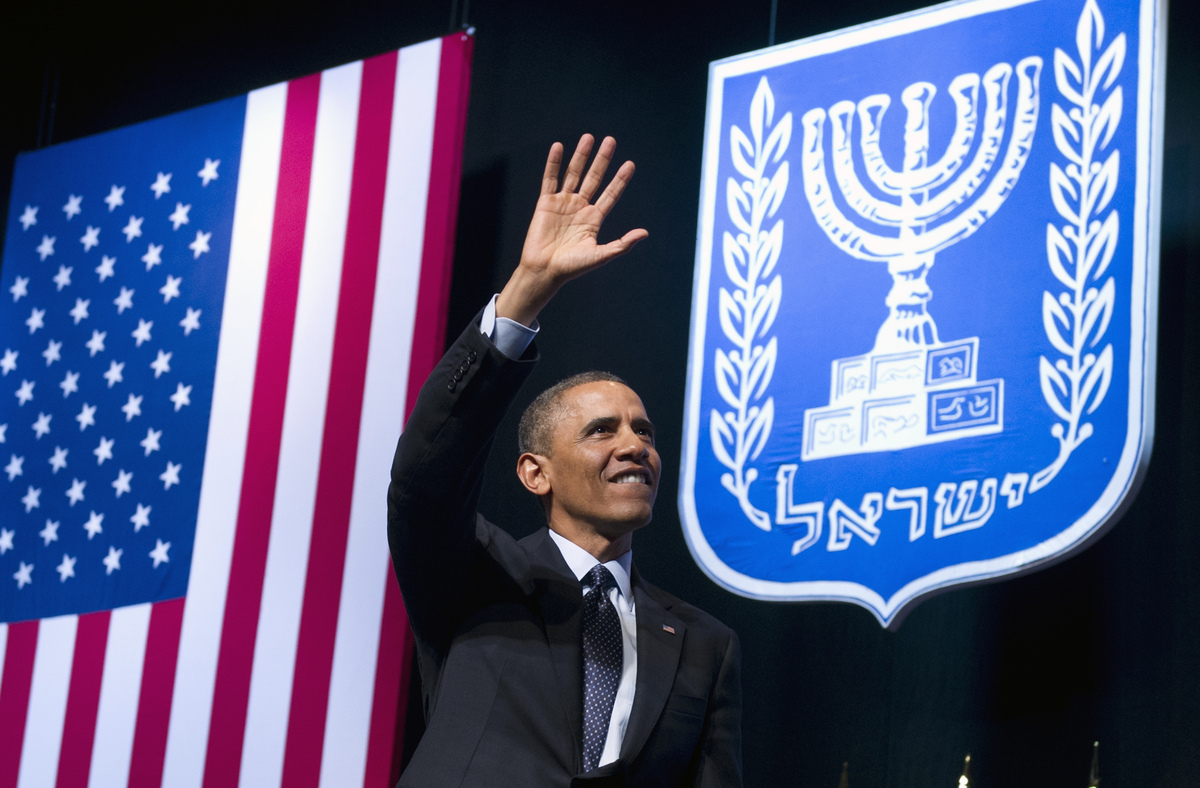 President Barack Obama waves after speaking on at the Convention Center in Jerusalem, on Thursday.

Speaking to Israeli students at the Jerusalem Convention Center on Thursday, President Obama delivered a speech brimming with talk of hope and change that echoed the Obama of 2008. While there were touches of specifics on where the peace process between Israelis and Palestinians should head, for the most part Obama stuck with highlighting fundamental similarities between peoples.

At one point, Obama was heckled by a protester. ("We actually arranged for that because it made me feel at home," Obama joked.) But aside from that, Obama was received by enthusiastic applause, even as he delivered a strong critique of Israel's settlement expansion and its failure to prosecute settlers who attack Palestinians.

We listened to the nearly one-hour speech and pulled out five excerpts worth reading. We've already posted on the news of the day.

"Negotiations will be necessary, but there is little secret about where they must lead – two states for two peoples. There will be differences about how to get there; there are going to be hard choices along the way. Arab States must adapt to a world that has changed. The days when they could condemn Israel to distract their people from a lack of opportunity ... are over. Now is the time for the Arab World to take steps towards normalizing relations with Israel. Meanwhile, Palestinians must recognize that Israel will be a Jewish state, and that Israelis have the right to insist upon their security. Israelis must recognize that continued settlement activity is counterproductive to the cause of peace, and that an independent Palestine must be viable– with real borders will have to be drawn. I've suggested principles on territory and security that I believe can be the basis for talks. But for the moment, put aside the plans and process. I ask you, instead, to think about what can be done to build trust between people.

"Four years ago, I stood in Cairo in front of an audience of young people. Politically, religiously, they must seem a world away. But the things they want – they're not so different from what the young people here want. The ability to make their own decisions; to get an education and a good job; to worship God in their own way; to get married, to raise a family. The same is true of the young people in Gaza. ...

"That is where peace begins — not just in the plans of leaders, but in the hearts of people; not just in a carefully designed process, but in the daily connections that take place among those who live together in this land, and in this sacred city of Jerusalem. Speaking as a politician, I can promise you this: political leaders will not take risks if the people do not demand that they do. You must create the change that you want to see. Ordinary people can accomplish extraordinary things.

"Your hopes must light the way forward. Look to a future in which Jews, Muslims and Christians can all live in peace and greater prosperity in this Holy Land. Believe in that. Most of all look to the future that you want for your own children – a future in which a Jewish, democratic state is protected and accepted, for this time and for all time.

"There will be many voices that say this is not possible. But remember this: Israel is the most powerful country in this region. Israel has the unshakeable support of the most powerful country in the world. Israel is not going anywhere. Israel has the wisdom to see the world as it is, but also the courage to see the world as it should be. Ben Gurion once said, 'In Israel, in order to be a realist you must believe in miracles.' Sometimes, the greatest miracle is recognizing that the world can change. That is a lesson that the world learned from the Jewish people."

A Sovereign Palestinian State Is Just:

"The Palestinian people's right to self-determination and justice must also be recognized. Put yourself in their shoes – look at the world through their eyes. It is not fair that a Palestinian child cannot grow up in a state of their own, living their entire lives with the presence of a foreign army that controls the movements of her parents every single day. It is not just when settler violence against Palestinians goes unpunished. It is not right to prevent Palestinians from farming their lands; to restrict a student's ability to move around the West Bank; or to displace Palestinian families from their home. Neither occupation nor expulsion is the answer. Just as Israelis built a state in their homeland, Palestinians have a right to be a free people in their own land.

Obama then ventured off script, saying he met a group of Palestinians earlier in the day. "Talking to them, they weren't that different from my daughter; they weren't that different form your daughters or sons. I honestly believe that if any Israeli parents sat down with them, they'd say, 'I want these kids to succeed. I want them to prosper.' I believe that," Obama said. He continued:

"Only you can determine what kind of democracy you will have. But remember that as you make these decisions, you will define not simply the future of your relationship with the Palestinians – you will define the future of Israel as well. As Ariel Sharon said, 'It is impossible to have a Jewish, democratic state and at the same time to control all of Eretz Israel. If we insist on fulfilling the dream in its entirety, we are liable to lose it all.' Or, from a different perspective, think of what David Grossman said shortly after losing his son, as he described the necessity of peace – 'a peace of no choice' he said, 'must be approached with the same determination and creativity as one approaches a war of no choice.'"

The United States Has Israel's Back:

"For young Israelis, I know that these issues of security are rooted in an experience that is even more fundamental than the pressing threat of the day. You live in a neighborhood where many of your neighbors have rejected your right to exist. Your grandparents had to risk their lives and all they had to make a place for themselves in this world. Your parents lived through war after war to ensure the survival of the Jewish state. Your children grow up knowing that people they have never met hate them because of who they are, in a region that is changing underneath your feet.

"So that is what I think about when Israel is faced with these challenges – that sense of an Israel that is surrounded by many in this region who reject it, and many in the world who refuse to accept it. That is why the security of the Jewish people in Israel is so important – because it can never be taken for granted. But make no mistake: those who adhere to the ideology of rejecting Israel's right to exist might as well reject the earth beneath them and the sky above, because Israel is not going anywhere. Today, I want to tell you – particularly the young people – that so long as there is a United States of America, Ah-tem lo lah-vahd. You are not alone."

On Iran, All Options Are On The Table, But Diplomacy Is Still Possible:

"When I consider Israel's security, I also think about a people who have a living memory of the Holocaust, faced with the prospect of a nuclear-armed Iranian government that has called for Israel's destruction. It's no wonder Israelis view this as an existential threat. But this is not simply a challenge for Israel – it is a danger for the entire world, including the United States. It would raise the risk of nuclear terrorism, undermine the non-proliferation regime, spark an arms race in a volatile region, and embolden a government that has shown no respect for the rights of its own people or the responsibilities of nations.

"That is why America has built a coalition to increase the cost to Iran of failing to meet their obligations. The Iranian government is now under more pressure than ever before, and that pressure is increasing. It is isolated. Its economy is in a dire condition. Its leadership is divided. And its position – in the region, and the world – has only grown weaker.

"All of us have an interest in resolving this issue peacefully. Strong and principled diplomacy is the best way to ensure that the Iranian government forsakes nuclear weapons. Moreover, peace is far more preferable to war, and the inevitable costs – and unintended consequences – that would come with it. Because of the cooperation between our governments, we know that there remains time to pursue a diplomatic resolution. That is what America will do – with clear eyes – working with a world that is united, and with the sense of urgency that is required.

"But Iran must know this time is not unlimited. And I have made the position of the United States of America clear: Iran must not get a nuclear weapon. This is not a danger that can be contained. As President, I have said to the world that all options are on the table for achieving our objectives. America will do what we must to prevent a nuclear-armed Iran."