Accessibility links
Coal And Coral: Australia's Self-Destructive Paradox : The Two-Way The city of Gladstone is the world's fourth largest coal-export hub. It's also a jumping off point to the southern end of the Great Barrier Reef. But coal mining could eventually kill the reef that Australians revere. 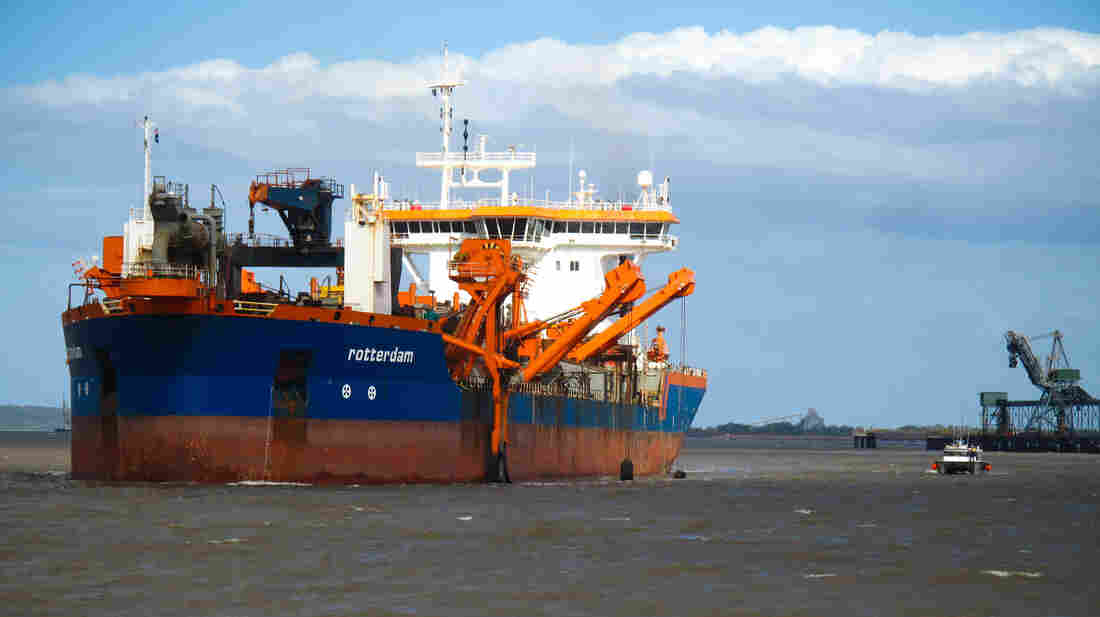 The city of Gladstone near the Great Barrier Reef is the world's fourth largest coal-export hub. Dredges, like one seen here, have turned the harbor brown as they work to expand the coal port. Richard Harris/NPR hide caption

NPR Science Correspondent Richard Harris traveled to Australia's Great Barrier Reef to find out how the coral reefs are coping with increased water temperature and increasing ocean acidity, brought about by our burning of fossil fuels. Day 5: A return to shore finds that people prefer cars to corals.

It's not every day you open an in-flight magazine and read an ad touting "spitwater pressure cleaners for the mining industry." Flip the page and you'll also see an ad cajoling you to "snorkel, sip, snooze" on the Great Barrier Reef.

This is Australia, and the ads illustrate a self-destructive paradox: Coal mining could eventually kill the reef that Australians revere.

Richard's Dispatches From Down Under

Day 2: A Turf Battle Rages On The Great Barrier Reef

Day 1: A Canary In The Coal Mine For Coral Reefs?

Nowhere is this more evident than in the city of Gladstone, a jumping off point to the southern end of the Great Barrier Reef and the world's fourth largest coal-export hub. Dredges have turned the harbor brown as they work to expand the coal port. And three massive liquefied natural gas terminals are being constructed on an island that is a World Heritage Site — a United Nations designation for places of exceptional natural value.

We all use fossil fuels, and so we all play some role in climate change. But in Gladstone, the connection is unusually direct.

The coal is shipped mostly to China. When it's burned, carbon that had been buried for hundreds of millions of years in Australia ends up in the air. Some dissolves in the ocean, where it turns into carbonic acid. If current trends continue, that increasing acidity, combined with ocean warming, could devastate coral reefs around the world. It's quite possible that the children of Gladstone will witness the death of the Great Barrier Reef.

Not that it's on the minds of most Gladstonians. "People simply don't want to go there. They don't want to think about it," says Jan Arens, who last year founded the city's one and only environmental group, the Gladstone Conservation Council.

Gladstone is an industrial hub in the state of Queensland. Last year, the state's ruling political party (the Liberal National Party) passed a resolution urging a ban on teaching schoolchildren about climate change, calling it "environmental propaganda material" and "post normal science."

A visitor in Gladstone, on the other hand, learns that draining ancient natural gas deposits is "sustainable," according to a display in an oil company's education center. In what sense it's sustainable, the man at the center couldn't exactly say.

But Australia isn't completely upside down, geography notwithstanding. Public polling finds that two-thirds of Australians accept the scientific consensus that climate change is occurring, and most accept that humans are largely responsible.

When it comes to the Great Barrier Reef, those polls essentially reveal a sentiment along the lines of "it's a lovely place, I'd hate to see it go, but at least I will still have my house and two cars," says John Connor, CEO of the Climate Institute in Sydney, an organization involved in both research and advocacy. In other words, nature comes up a distant second to lifestyle.

Connor says the group's strategy is to find ways to "manage the unavoidable but try to avoid the unmanageable." But he concedes that short of a global shift away from burning fossil fuels, the demise of the reef appears to fall into the sad category of being both unmanageable and unavoidable.