Accessibility links
At First Of Gay-Marriage Cases, Skepticism About Whether Court Should Weigh In : The Two-Way The justices began two days of high-profile oral arguments with many questions about whether they should even consider ruling on the merits of California's Proposition 8, which banned gay marriage in that state. 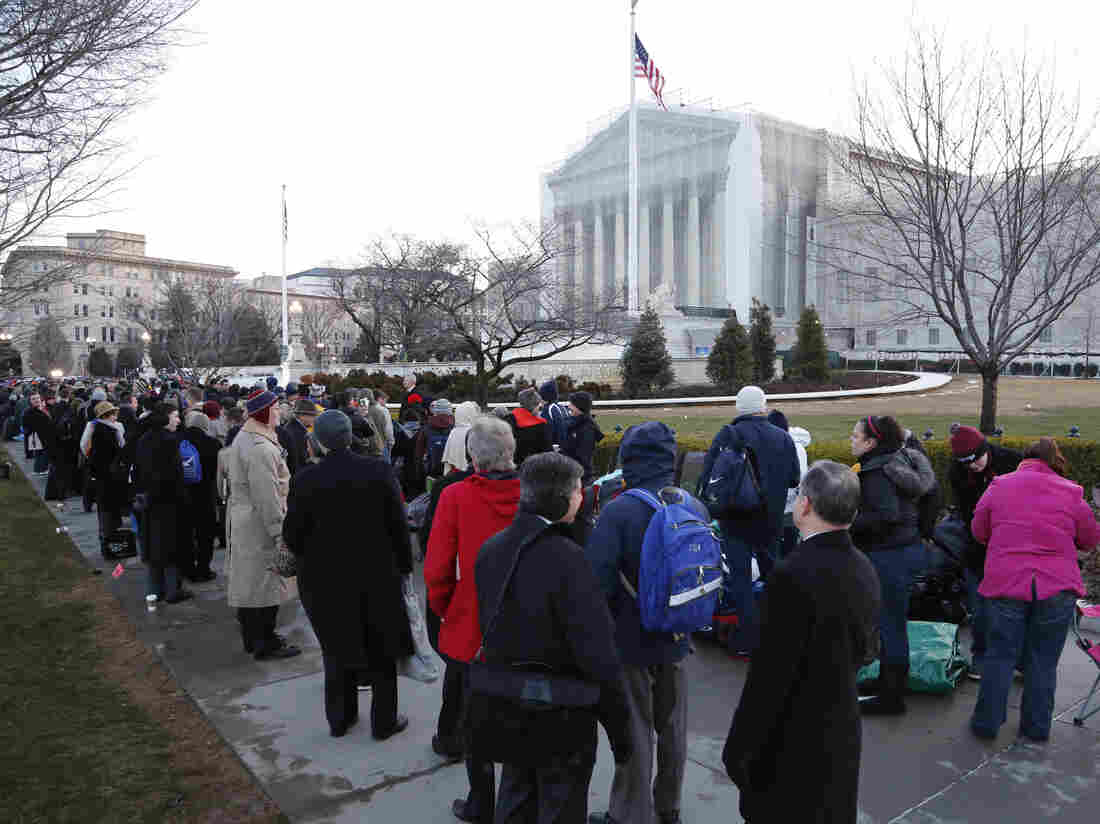 The line was long Tuesday outside the Supreme Court in Washington, D.C., as spectators came to hear the oral arguments about California's Proposition 8. Jonathan Ernst /Reuters /Landov hide caption

In the first of two hearings on one of the nation's most controversial issues — same-sex marriage — Supreme Court justices on Tuesday poked holes in the arguments made by supporters and opponents of bans on gay marriage. Their queries signaled much skepticism about the legal cases being made by the two sides and whether the court should even get involved, NPR's Nina Totenberg told us shortly after the court session ended.

And in the end, she said, the justices seemed to be wondering "why are we getting into this at all at this point when the state of California no longer supports the ban on same-sex marriage? Maybe we [the justices] should just go away and drop it."

That could mean the justices will let stand a lower court's ruling that invalidated California's Proposition 8 ban on same-sex marriage, without actually ruling on the issue of whether such a ban is or is not constitutional. If the justices took that step, then the decision would only apply in California — not nationally.

Among the key issues that justices focused on:

-- The case made by proponents of California's Proposition 8 that procreation is a key element of marriage. That argument "got a lot of push-back at the court," Nina said, because "obviously there are many people who get married who are not going to have children."

-- "On the conservative side of the bench," the case was made that same-sex marriage is too new to know what its effects may be. Chief Justice John Roberts and Justice Samuel Alito argued that the courts should leave the issue to legislatures.

Nina told us "it was a real ... back-and-forth between is this a denial of equal protection of the law ... [and] the conservative justices saying this is incredibly new. ... Let's let the democratic process play out."

As for whether Tuesday's oral argument says anything about what will happen Wednesday when the justices hear a challenge to the federal Defense of Marriage Act, "oddly enough, I don't think so," Nina said. That case "is a much clearly question of federal benefits applied to people who are married in states where [same-sex] marriage is legal" and the democratic process has played out.

At the respected SCOTUSblog, lawyer/publisher Tom Goldstein reaches this conclusion about Tuesday's hearing:

He says that the two most likely outcomes for the case argued Tuesday are that the justices decide Prop 8's proponents "lack standing" or that the court dismisses the case "because of an inability to reach a majority."

"The upshot of either scenario is a modest step forward for gay rights advocates, but not a dramatic one. The Court would stay its hand for some time for society to develop its views further. But combined with a potentially significant ruling in the DOMA case being argued tomorrow, the Term will likely nonetheless end up as very significant to gay rights."

For another analysis, see this from SCOTUSblog's Lyle Denniston: "On Marriage, Kennedy In Control."

If you're not up to speed on the cases and the issues, our post from earlier in the day is one place to start.

We followed developments Tuesday as word began to emerge about what had happened inside the court room. Scroll down to see how the story developed:

Update at 11:55 a.m. ET. Skepticism About Standing, The Supporters' Case And Whether The Court Should Weigh In Now:

1) There was skepticism from several justices over whether supporters of Prop 8 had the legal "standing" to challenge the lower court's decision that invalidated Prop 8.

2) There was "push-back" on the argument being made by Prop 8 supporters that procreation is a critical component of marriage.

3) Some justices expressed the opinion that same-sex marriage is too "new" to warrant judicial action, and that legislatures should be allowed more time to craft legislation.

According to Reuters, "oral arguments in #Prop8 just concluded ..."

The oral argument has gone longer than scheduled, according to reports from the court. It should be over soon (if it hasn't finished already; it's impossible for us to know precisely what's happening inside the courtroom).

Fresh analysis from SCOTUSblog: "There are not 5 votes to strike down #prop8 and recognize equal right to #ssm at this time."

According to Reuters, Justice Anthony Kennedy (often the "swing" vote in close cases) expressed the thought that children of same-sex couples "want their parents to have full recognition and legal status."

The New York Times' live blog adds that "the justices, particularly Anthony Kennedy and Antonin Scalia, appear to be debating the effect of the gay marriage ban on the children of gay couples."

SCOTUSblog and Reuters are beginning to post some bits of information about what's been said during this morning's oral arguments and what the justices' comments may mean. According to Reuters, Chief Justice John Roberts' questions hint that he thinks the sponsors of Prop 8 may not have the legal standing to challenge a lower court's ruling that invalidated the law. NPR's Nina Totenberg reported for Morning Edition that "standing" would be the threshold question. If that's the case, then the court may not rule on the constitutionality of the ban on gay marriage.

We're likely at least 10 minutes or so away from getting our first word about what's been said during Tuesday's oral arguments. Meanwhile, the live blogs from other organizations, such as The New York Times and Reuters, are filling the time with word of celebrity sightings — actor/director Rob Reiner, for instance, is at the court.

The justices came to the bench at 10 a.m. ET. Tuesday's argument should be over by 11 a.m. ET. SCOTUSblog is promising updates on its Twitter page. We'll be monitoring that and watching what others have to say — including the discussion hosted by NPR's Frank James and Andy Carvin on the NPRPolitics Twitter account. Right after the hearing, we're scheduled to speak with NPR's Nina Totenberg.

Outside the court this morning, NPR's Craig Windham said the crowd was so large "you can't even move through it."

There were demonstrators on both sides of the issue, Craig added earlier, and an hour or so before the hearing, "clearly the majority ... favor gay marriage and they're hoping the court will make a broad ruling." That changed as the court session began, Craig later told our Newscast Desk — hundreds of opponents of gay marriage came to the site to make their voices heard.