Accessibility links
Florida Gulf Coast University: This Year's Cinderella Story In 10 Shots : The Two-Way Be honest, had you heard of the school before its men's basketball team advanced to the Sweet 16? Well, here are 10 things to know about the new darlings of the court. 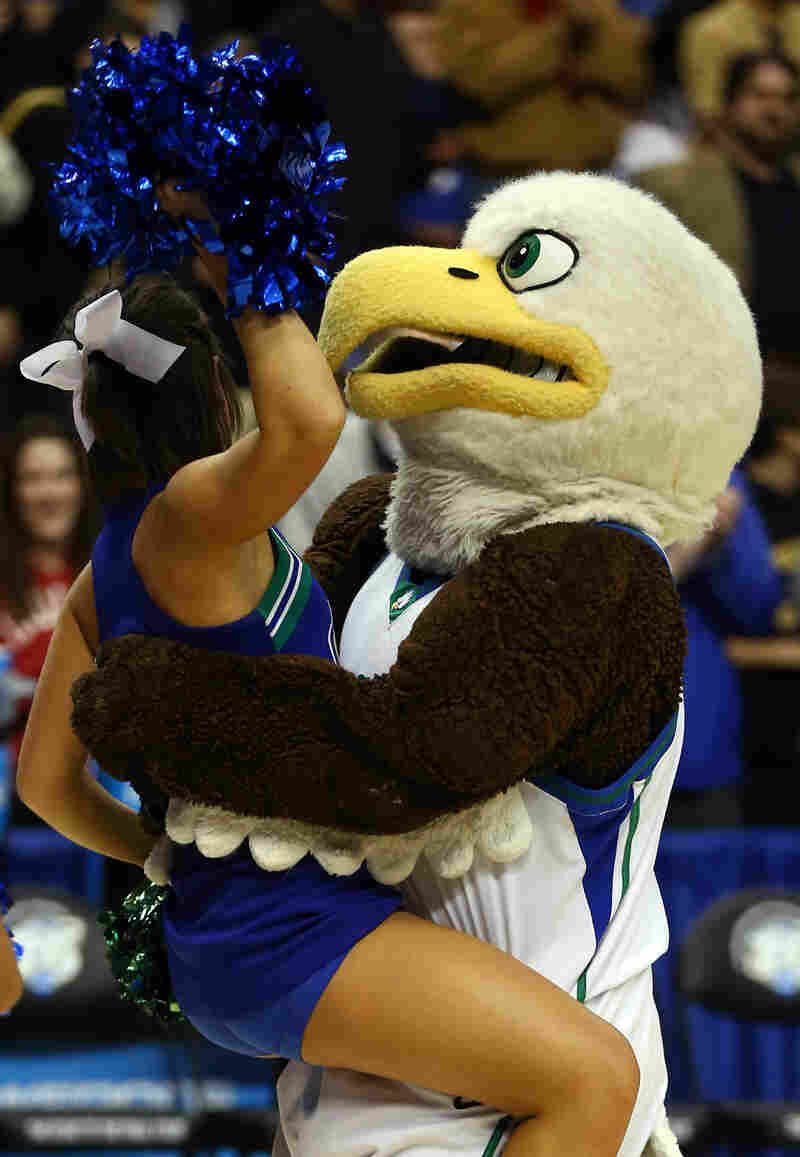 The Florida Gulf Coast Eagles mascot picks up an Eagles cheerleader after the team's 81-71 victory against the San Diego State Aztecs on Sunday in Philadelphia. Elsa/Getty Images hide caption 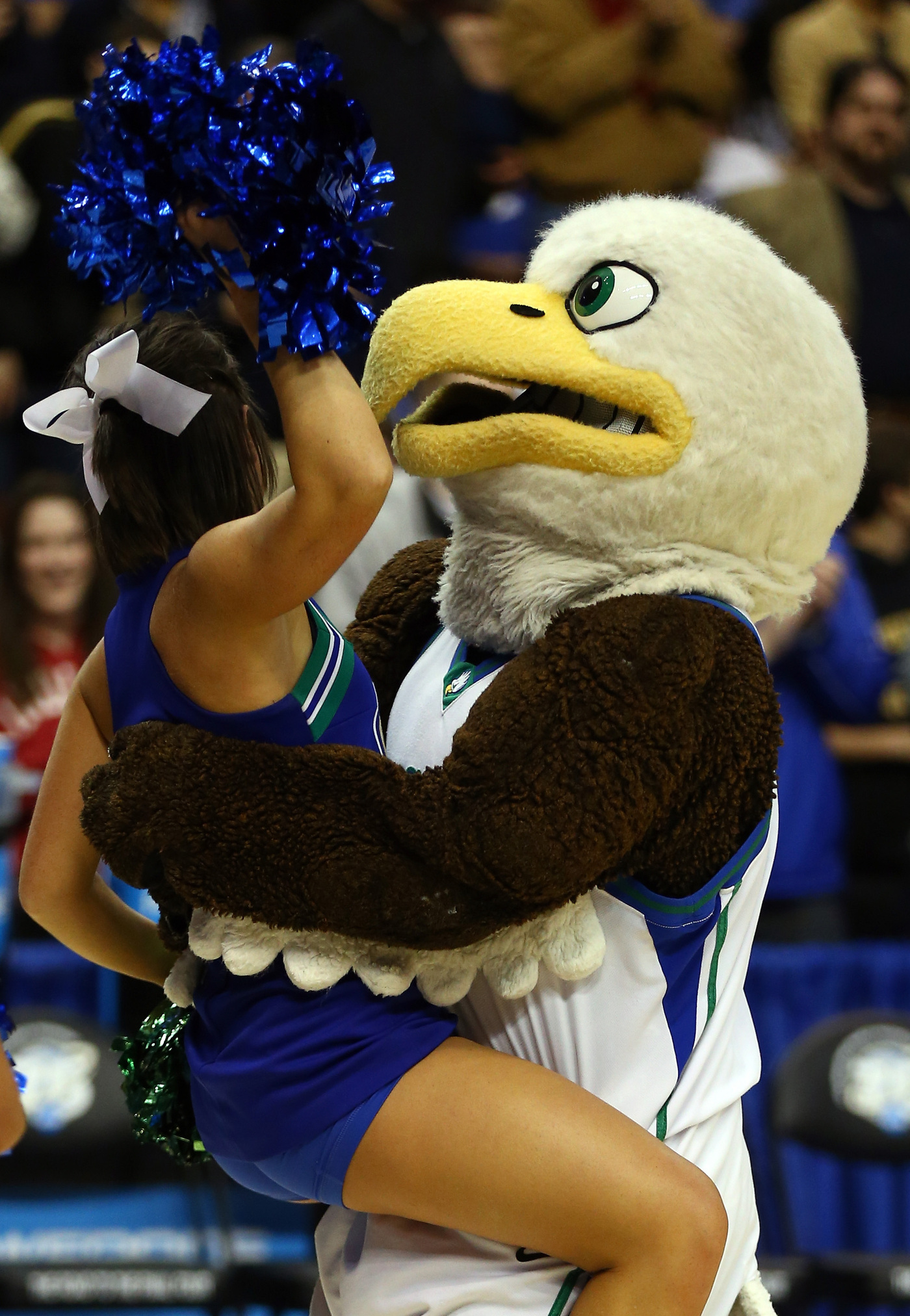 The Florida Gulf Coast Eagles mascot picks up an Eagles cheerleader after the team's 81-71 victory against the San Diego State Aztecs on Sunday in Philadelphia.

There's no bigger sports story in the nation this week than what Florida Gulf Coast University's team did during the first weekend of the NCAA Division I men's basketball championship.

A No. 15 seed in the tournament's South region, the team shocked No. 2 seed Georgetown on Friday — beating the Hoyas by 10 points; 78-68. Then on Sunday night, FGCU beat No. 7 seed San Diego State — also by 10 points; 81-71. This is the first time a No. 15 seed (there are 16 teams in each region, so FGCU was just one away from the bottom of the group) has gotten to the "Sweet 16" round of the tournament, which begins Thursday. Games will be broadcast by CBS and TBS.

Now, be honest, had you heard of Florida Gulf Coast before last week?

Well, now you have. But most of us don't know much about FGCU. So here are 10 things to know about these bracket busting hoopsters:

10. As you would expect, FGCU on the Gulf Coast; in Fort Myers, Fla. Some dorm rooms look out on a small lake.

9. The school is part of the State University System of Florida.

8. Classes were first held in 1997 (so the players are older than the school).

6. The FGCU first men's basketball team hit the court in 2002. The team's nickname: the Eagles. They play in the Atlantic Sun Conference.

4. Coach Andy Enfield got rich from co-founding a tech company and is married to former Maxim model Amanda Marcum.

3. The Eagles are an exuberant bunch and like to go hard to the hoop, which is why they've inspired a "Dunk City" rap.

2. If you didn't pick Florida Gulf Coast to win it all, you're in good company: Yahoo says that of the more than 3 million brackets filled out on the Yahoo! Fantasy Sports' Tourney Pick'Em contest, just 337 had the Eagles winning the championship. The only team to be chosen by fewer people to go all the way: Iona (the choice of 322 folks). Iona was bounced out in its first game, losing 95-70 to Ohio State.

1. By getting to the Sweet 16, FGCU has obviously increased its odds of winning the championship — but not by much. Nate Silver, The New York Times wizard of prognostication, says the chances of the Eagles cutting down the nets at the end are now 0.02 percent, vs. 0.001 percent before the tournament began.

Among the other places we pulled those facts from:

Florida Gulf Coast's next game is Friday night against the University of Florida. Tip-off is tentatively set for 10:07 p.m. ET. The game will be broadcast on TBS.

All Things Considered's Audie Cornish spoke to John Woodrow Cox, a writer with the Tampa Bay Times. He added one more interesting tid-bit about the university: It's not a basketball school. Their arena sits 4,500 and has two concession stands. During the games this season, said Cox, it wasn't packed.

He also said the weekend wins took students by surprise, so they did what they'd seen other schools do.

"They ran out in the streets and they yelled and they got in their cars and drove around and honked horns and hugged each other," Cox says. "But they really didn't know what to do."

The overnight note from the local police summed up the celebrations: noise for about an hour, no damage reported.