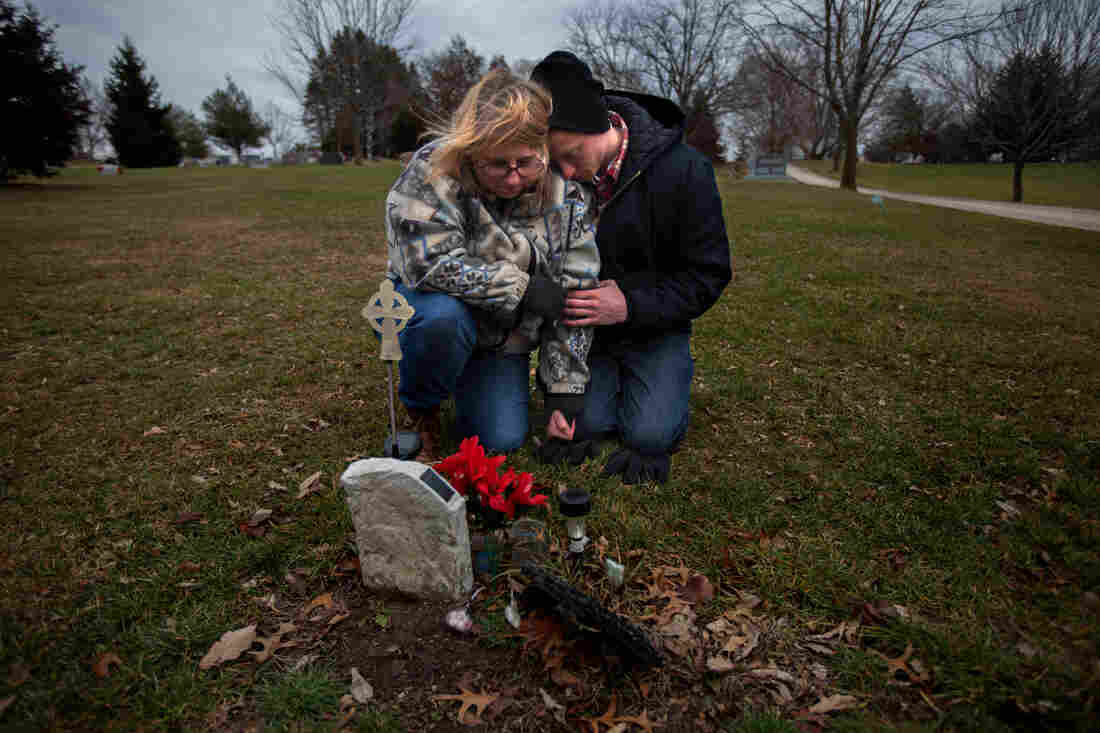 Will Piper and Annette Pacas visit the grave of Annette's son, Alex, at Oak Hill Cemetery in Mount Carroll, Ill. Piper says he hopes to raise money to replace the makeshift, plastic marker with a permanent gravestone.

Congress, the Occupational Safety and Health Administration and the Justice Department are beginning to respond to the NPR-Center for Public Integrity Series on hundreds of persistent and preventable deaths in grain storage bins and weak enforcement by federal agencies.

Two federal officials familiar with the case say that the Justice Department is again considering criminal charges in the incident in Mt. Carroll, Illinois, in 2010, in which 14-year-old Wyatt Whitebread and 19-year-old Alex Pacas suffocated in thousands of bushels of corn. Will Piper, 20, survived but was unable to save his friends and co-workers. The owner of the grain bin, Haasbach LLC, was initially fined $555,000 but OSHA cut the fine 60 percent.

NPR/CPI obtained Labor Department documents that showed the Justice Department initially declined to file criminal charges in the case, despite multiple willful violations and what one former OSHA official called "the worst of the worst" cases.

The officials now tell NPR that the Justice Department asked the Labor Department to again provide the Mt. Carroll case files. The request was made in January when NPR and CPI were pressing the agency to respond to questions about the case.

"They're taking another look" at the Mt. Carroll incident, one source said.

"They should reconsider," says Annette Pacas, Alex's mother. "It was a crime. They killed two kids. It should be prosecuted as a crime."

"Unless that happens this kind of thing is not going to stop," Whitebread says.

Haasbach LLC has declined comment given wrongful death and injury lawsuits filed by Piper, the Whitebreads and Annette Pacas.

A spokesman for Gary Shapiro, the acting U.S. attorney in the Northern District of Illinois, said he couldn't comment, citing agency policy.

Another source briefed about OSHA's response says the NPR/CPI series prompted an internal warning to agency officials. NPR/CPI reported that OSHA has routinely slashed fines and erased its most serious citations even when willful violations of law result in worker deaths.

Senior agency staffers were told this week that the NPR/CPI series has put grain bin violations under scrutiny and requires more "thinking" about penalty reductions in cases with willful citations and fatalities. An OSHA spokesman declined comment.

Congress is also beginning to respond to the NPR/CPI series. Three Democratic Senators cited the NPR/CPI findings in announcing their support for the newly-reintroduced Protecting America's Workers Act (PAWA).

"Whether working on a factory floor, on an oil rig, or in a grain bin, our workers and their families need to know that they will be safe and protected at the workplace," said Sen. Tom Harkin (D-IA), chair of the Senate labor committee. "And when violations do occur — especially those leading to injury and death — our laws need to be enforced, with lawbreakers held responsible."

"No worker should be put in a position of mortal danger, especially those who are untrained and ill-equipped," said Sen. Patty Murray (D-WA), the chief sponsor of PAWA. "The evidence is clear that neither current criminal penalties, nor the paltry level of civil penalties allowed for under law, are sufficient to stop those employers who repeatedly violate the law and put workers in danger that leads to their death."

Under current law, workplace deaths are misdemeanors with convictions bringing no more than six months in prison. NPR/CPI reported that criminal prosecutions are rare in grain bin deaths and no one has gone to jail. Federal prosecutors decline worker death cases because they have felony crimes with more serious punishment competing for their attention.

Finally, NPR and CPI have been inundated with responses from listeners and readers. Many offered to respond to the plea of Mt. Carroll survivor Will Piper, who said he wanted to raise money for a headstone for his friend, Alex Pacas.

One anonymous donor pledged to pay the entire costs of a headstone. There's also a newly-announced effort in Mt. Carroll to erect a memorial to Pacas and Whitebread in their favorite city park.