Accessibility links
Two Of Four: Syracuse, Wichita State Headed To Atlanta : The Two-Way In a surprising upset, No.9-seeded Wichita State defeated No. 2 Ohio State 70-66 to cement their place in the Final Four tournament in Atlanta. Earlier in the day, Syracuse dominated Marquette 55-39. 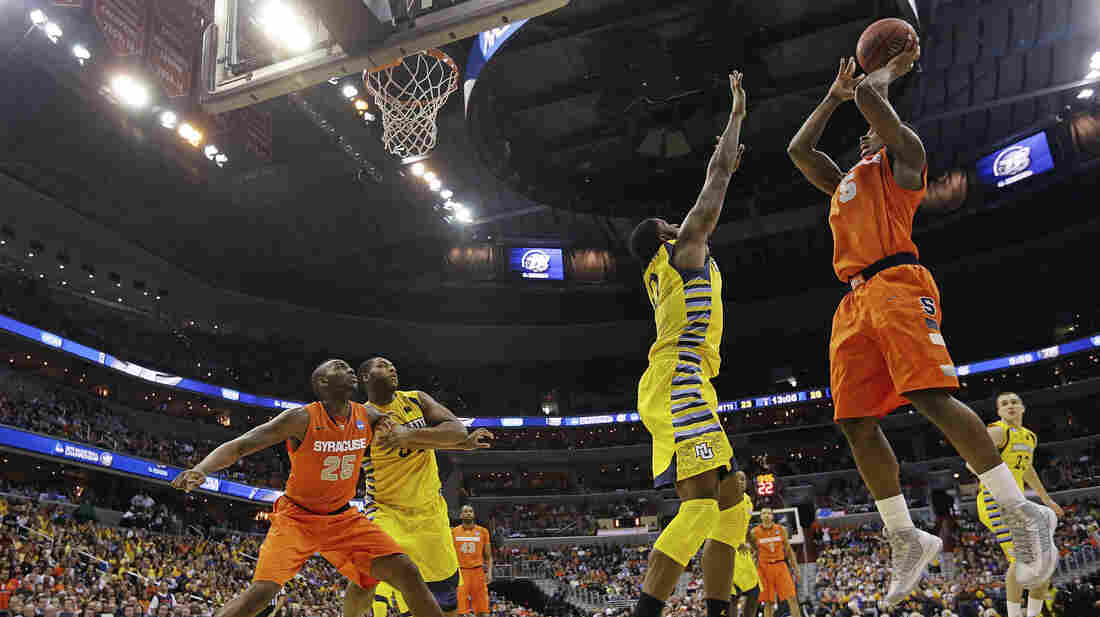 Syracuse forward C.J. Fair (No. 5) shoots over Marquette forward Jamil Wilson (No. 0) during the second half of the East Regional final in the NCAA men's college basketball tournament on Saturday. Pablo Martinez Monsivais/AP hide caption

Syracuse and Wichita State won their games on Saturday to become the first two teams to make it to the Final Four this season, one step closer to the NCAA men's basketball title.

In the first game of the day, No. 4-seeded Syracuse dominated No. 3 Marquette 55-39 in the East Regional final. The win earned Syracuse coach Jim Boeheim his first trip to the semifinals since 2003.

"When they managed to avoid turning the ball over, the Golden Eagles looked as if they were shooting the basketball with oven mitts. Marquette shot 22.6 percent from the field, including 3 of 24 from 3-point range."

"They beat us from start to finish. We collectively tried everything we knew to try," Marquette coach Buzz Williams said. "It is the zone, and it is the players in the zone."

Held at the Verizon Center in Washington, D.C., the game was attended by President Obama as well. The president had picked Indiana and Louisville to meet in the championship game in Atlanta, with Indiana claiming the title. Unfortunately for the president's bracket, Syracuse also defeated Indiana on Thursday.

In a surprising upset, No. 9-seeded Wichita State defeated No. 2 Ohio State 70-66 to win the West Regional final to cement their place in the Final Four tournament in Atlanta.

As The Associated Press reports, Wichita State roared to a 20-point lead with 11 minutes to play after Ohio State played an awful first half, but LaQuinton Ross scored 15 of his 19 points after halftime, leading a ferocious rally to within three points in the final minutes.

Wichita State becomes only the fifth team seeded ninth or higher to make the Final Four, notes Yahoo Sports, and is the first Missouri Valley Conference team to make it to the Final Four since Larry Bird led Indiana State to the title game in 1979.

After what many saw as an improbable win over No. 1 Gonzaga last week, and another over OSU, Wichita State now must look toward Atlanta where yet another giant awaits. They'll face the winner of Sunday's Midwest Regional final between No. 2-seeded Duke and No. 1 Louisville.

Also on Sunday, No. 4-seeded Michigan faces No. 3 Florida in the South Regional final to round out the remaining spots in the Final Four.