Accessibility links
After Injury Sidelines Key Player, Top-Seeded Louisville Moves On To Final Four : The Two-Way After the weekend's regional finals, the state for Atlanta is set with Michigan facing Syracuse and underdog Wichita St. will squaring off against Louisville to decide who will move on to the big game to decide the national championship. 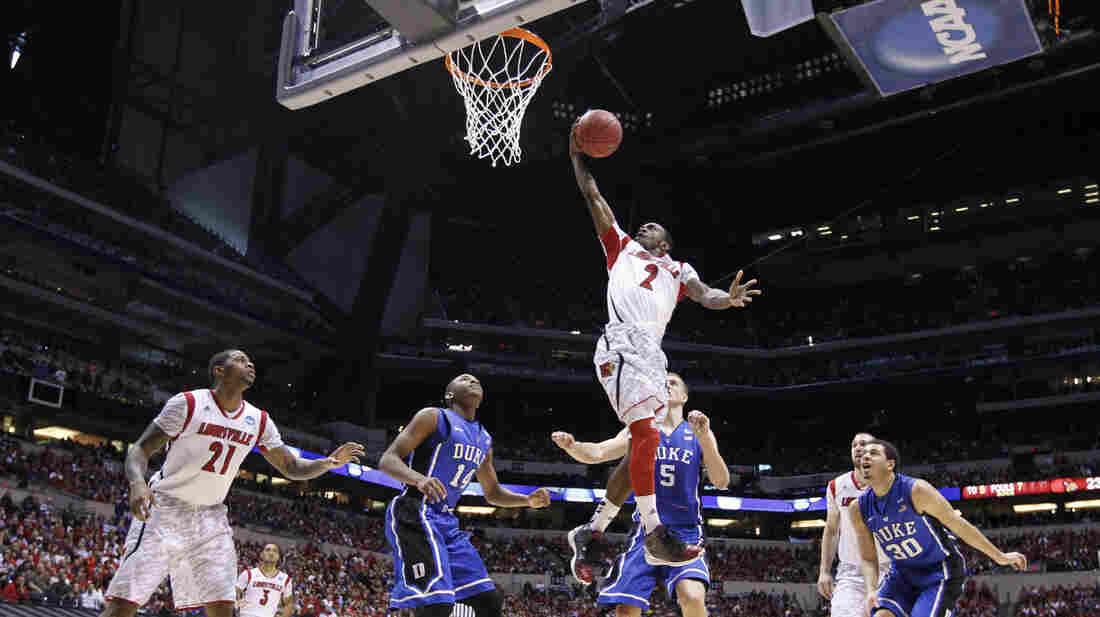 Louisville guard Russ Smith (2) goes up with a layup against Duke defenders during the first half of the Midwest Regional final in the NCAA college basketball tournament Sunday in Indianapolis. Michael Conroy/AP hide caption 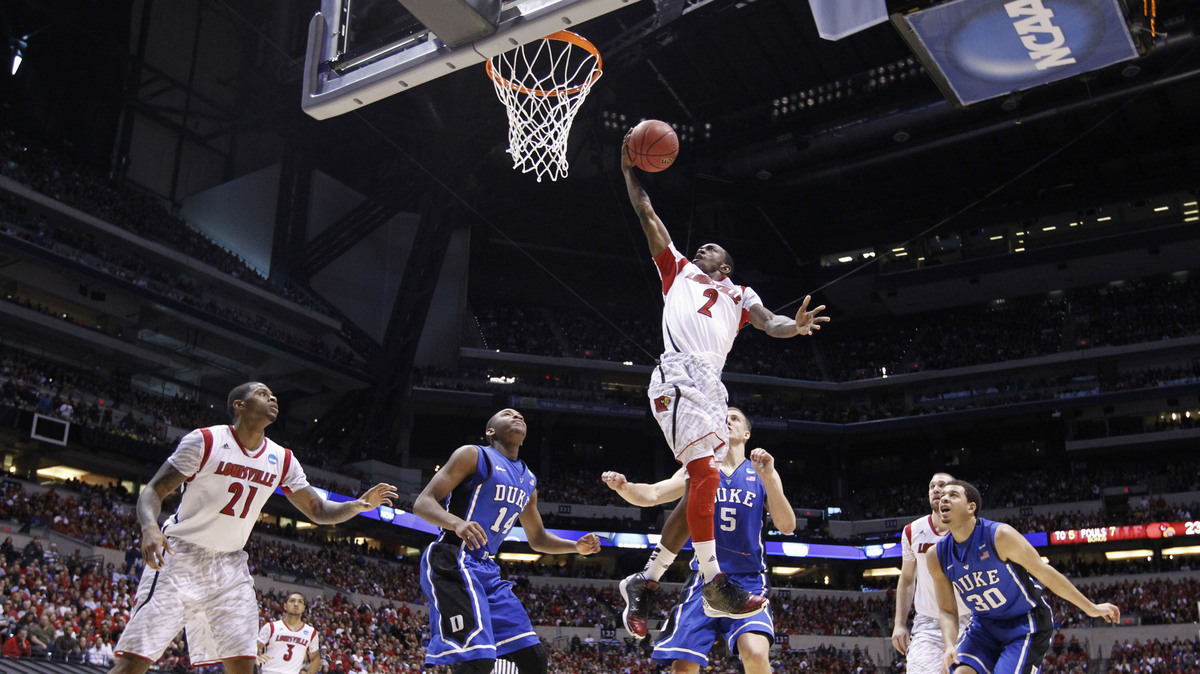 Louisville guard Russ Smith (2) goes up with a layup against Duke defenders during the first half of the Midwest Regional final in the NCAA college basketball tournament Sunday in Indianapolis.

The stage is set and the Final Four are headed to Atlanta.

After the weekend's regional finals, Michigan will face Syracuse and underdog Wichita St. will face Louisville to find out who is going to the big game to decide the national championship.

Overcoming a gruesome injury to one of its players, No.1-seeded Louisville defeated 4-time NCAA champs Duke 85-63 to move on to the Final Four.

The first half saw the lead seesaw between the two teams, but an injury suffered by Louisville guard Kevin Ware brought the game to a grinding halt.

With 6:33 left on the clock before the half, Ware contested a 3-point shot by Duke's Tyler Thorton. Ware's leg buckled when he landed, bending almost at a right angle according to the AP. Ware was removed from the court on a stretcher and taken to an area hospital. School officials later said Ware sustained a broken lower right leg.

Watching Duke/ Louisville my heart goes out to Kevin Ware.

The Associated Press had this reaction of the injury:

"Louisville forward Wayne Blackshear fell to the floor, crying, and Chane Behanan looked as if he was going to be sick on the court, kneeling on his hands and feet. Peyton Siva sat a few feet away, a hand covering his mouth.

Luke Hancock patted Ware's chest as doctors worked on the sophomore and Russ Smith — who is from New York City like Ware — walked away, pulling his jersey over his eyes."

Not to be deterred, Louisville headed into the locker room at the half with a 35-32 lead and went on to victory.

"We won this for him," Louisville coach Rick Pitino said. "We were all choked up with emotion for him. We'll get him back to normal. We've got great doctors, great trainers. We talked about it every timeout, 'Get Kevin home.'"

Exploding out of the gates in the first half of the Southern Regional final on Sunday, Michigan held a double-digit lead the entire game to defeat Florida 79-59.

The Wolverines scored the first 13 points of the game and just kept on going. Shooting guard Nik Stauskas scored 22 points for Michigan and sunk all six of his 3-point shots taken.

The New York Times wrote that Michigan made it look easy:

"When adversity hit, [Florida] seemed to shrink, and Michigan blasted the Gators from the start, opening with a 13-0 run en route to a 47-30 halftime lead. No team had scored so many points in any half against Florida this season, and the Wolverines were relentless from all angles."

This is the first time Michigan has reached the Final Four since its consecutive national championship game appearances in 1992 and 1993. That was known as the Fab Five era when the team included Chris Webber, Jalen Rose, Juwan Howard, Ray Jackson and Jimmy King.

For the Gators, it was another disappointing end to the NCAA tournament. The team has not been to the Final Four since it won consecutive national titles in 2006 and 2007.

Michigan's next challenge is to topple Syracuse in the national semifinal.

The Final Four will meet at the Georgia Dome in Atlanta on April 6, and the championship game will be held on April 8.