Accessibility links
Louisville Player's Surgery A Success; Leg Break Shouldn't End His Career : The Two-Way Kevin Ware's injury may be the most talked-about story from the weekend's games, but there was other big news. On the women's side, Louisville shocked No. 1-ranked Baylor, knocking out the defending champions. On the men's side, Wichita State continues its surprising run.

From 'Morning Edition': Mike Pesca on the weekend's action 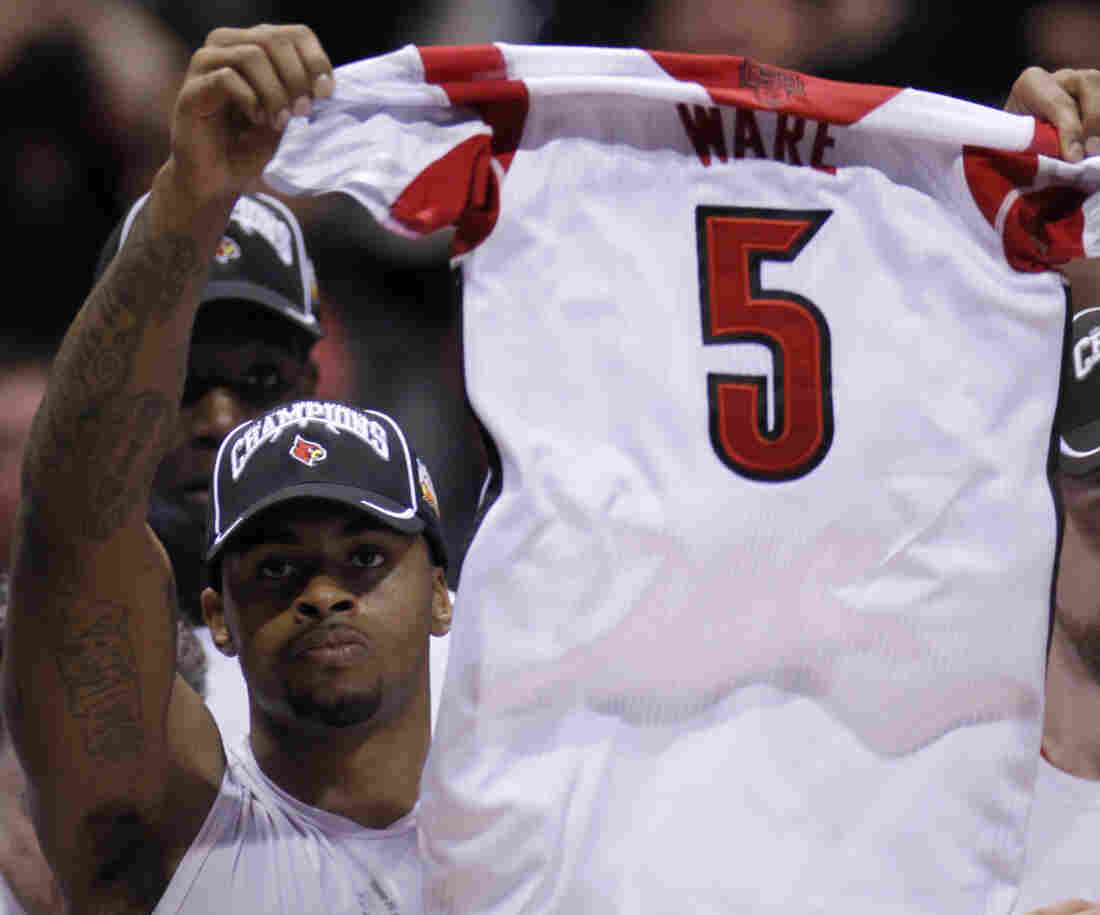 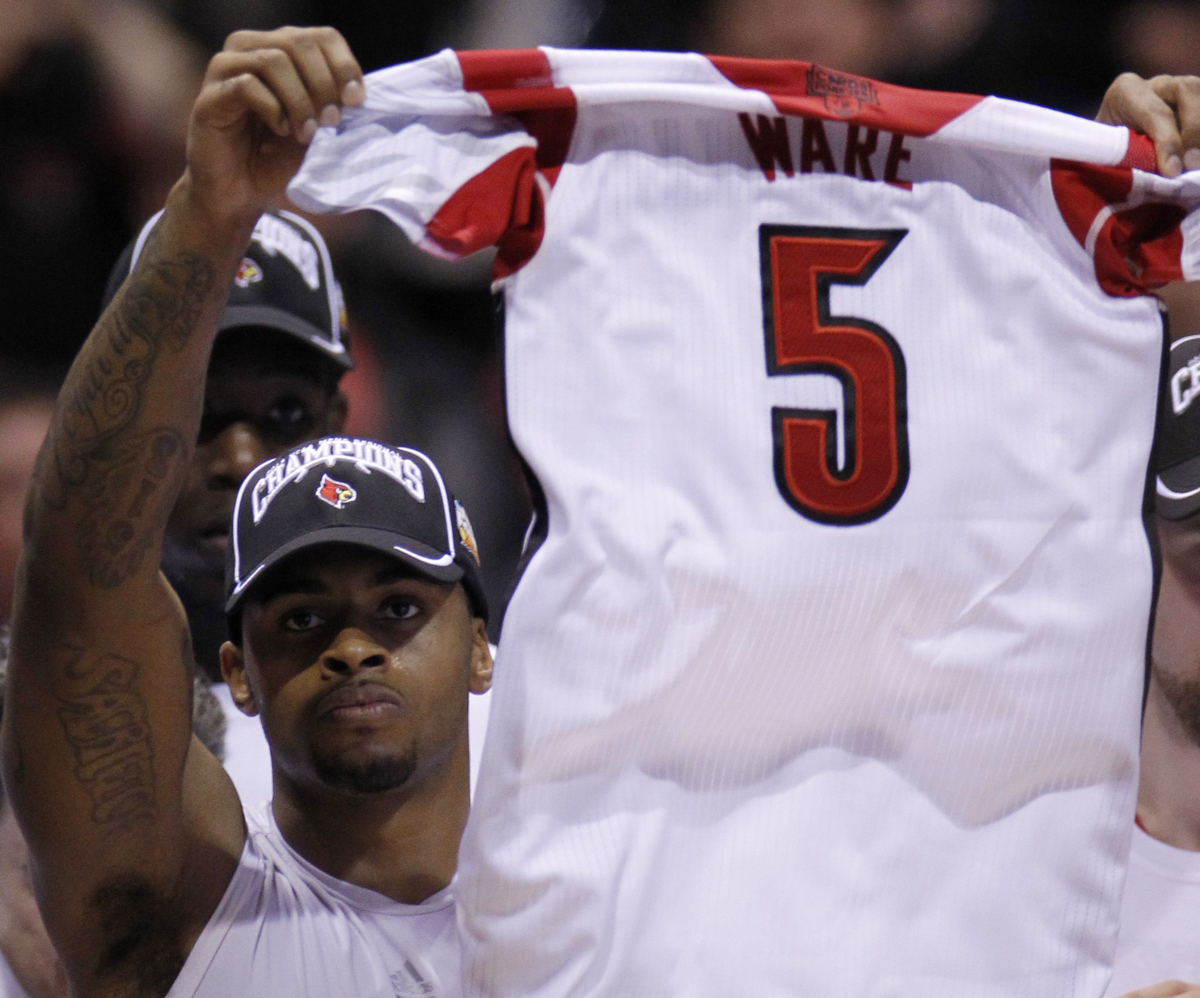 Louisville Cardinals forward Chane Behanan holds up the jersey of injured teammate Kevin Ware after the team's win Sunday over the Duke Blue Devils. Ware broke his leg during the game.

From 'Morning Edition': Mike Pesca on the weekend's action

According to the newspaper, "Ware is hopeful he can return to Louisville after Tuesday, then join the Cardinals as they advance to the Final Four in Atlanta, his hometown." The university's sports medicine director, Fred Hina, tells the Courier-Journal that though Ware's recovery will be lengthy, the injury should not end his career. Ware is a sophomore. (Note at 11:30 a.m. ET. Monkey See now has a related post: Viewer Discretion: Deciding When To Look Away.)

His injury may be getting the most attention after the weekend's action in the men's and women's Division I basketball tournaments, but it's certainly not the only big story.

The Louisville women, as NPR's Mike Pesca said earlier on Morning Edition, pulled off the "biggest upset in women's college basketball history" on Sunday when they beat No. 1-ranked Baylor, 82-81. Baylor is led by Brittney Griner, considered by many experts to be the greatest player in the history of women's college basketball. Her team had won 32 straight games and was the defending champion.

But the Louisville women, a No. 5 seed in the tournament's Oklahoma City region and ranked No. 16 in the nation, figured out a way to control Griner. ESPN writes that:

"Louisville surrounded Griner as she has been most of her career, using a zone defense Louisville coach Jeff Walz called the 'claw and one.' He put one player in front of Griner and another behind her, and often another one in the vicinity. 'I think I could smell what toothpaste she used,' Antonita Slaughter said. 'I was in her face the whole time with my hands up.' "

The women's tournament continues Monday night. ESPN is the broadcaster. The Final Four will be set after Tuesday's contests.

On the men's side, as we reported Sunday, the Final Four has three big-time teams — Louisville, Syracuse and Michigan — and one upstart. That would be Wichita State.

The Shockers, as Wichita State is known, get to play No. 1 seed Louisville on Saturday in the early game (6:05 p.m. ET tipoff). Michigan and Syracuse follow. Their games will be in Atlanta. The championship is set for next Monday night. CBS is the broadcaster.

Speaking of the Shockers: how did they get that name?

As Business Insider says, "a 'shocker' is one who harvests wheat."

"It was in 1904 when Wichita State University was known as Fairmount College that R.J. Kirk (Class of 1907), a football manager, invented the name 'Wheat Shockers' for posters to advertise a game against the Chilocco Indians. ... In those days, when wheat was shocked or headed, the majority of the players earned a stake for college expenses by working all summer in the harvest and threshing and came back tough enough to play 60-minute games."

As for the nicknames of the other men's teams.

-- Michigan: The university says there are several theories as to why the wolverine, an animal that was not abundant in the state, came into use in the 1860s. Former football Fielding H. Yost said it was because wolverine pelts were traded for many years at Sault Ste. Marie.

-- Syracuse: The Orange may have adopted a fruit as their mascot, but the nickname stems from a fictional "Indian figure named Big Chief Bill Orange," according to the university. He was created in 1931 and was said to be a "Saltine warrior." In the late '70s, "members of a Native American student organization headed a protest against using the Saltine Warrior as an athletic mascot." In the decades since, Otto the Orange has emerged.