Accessibility links
North Korea To Shut Jointly Run Factories, May Test Missile : The Two-Way The factory complex inside North Korea produces products for South Korean companies. It has been a rare example of cooperation. Now, it's caught in the latest round of escalating tensions on the peninsula. 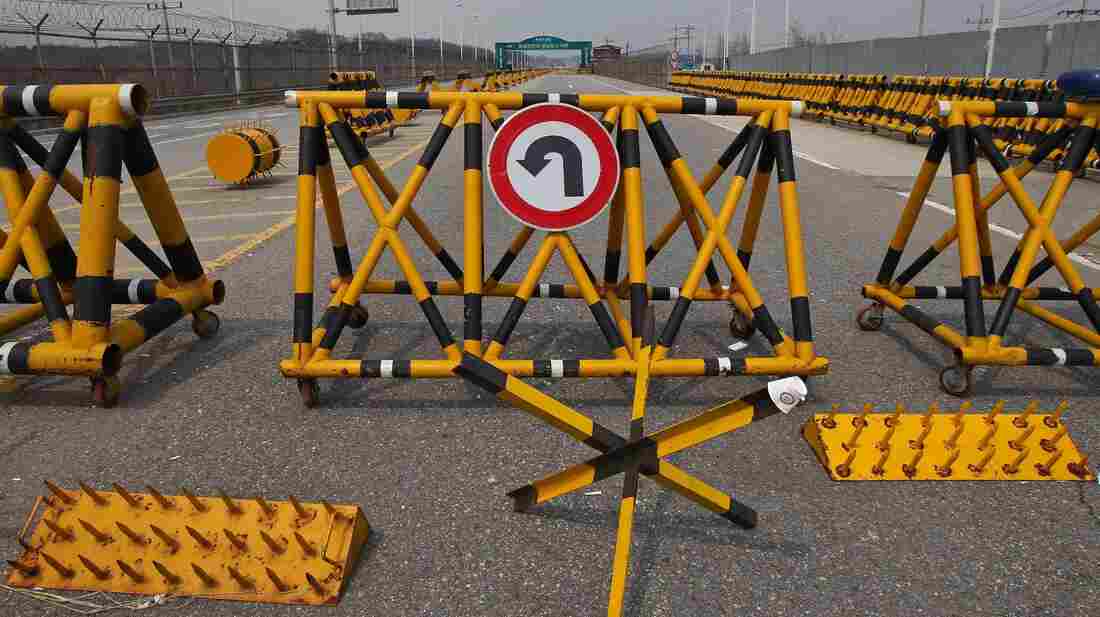 Do not enter: Barriers, including spikes, at the Military Demarcation Line (MDL) near the Demilitarized Zone (DMZ) in the Gyeonggi province, South Korea. Jeon Heon-kyun /EPA /LANDOV hide caption

Monday's developments on the Korean Peninsula, where tensions have been running even higher than usual in recent weeks:

-- North Korea says it is recalling workers from the Kaesong Industrial Complex, inside its territory, where tens of thousands of North Koreans produce products for South Korean companies. It plans to at least temporarily shut the operations there.

NPR's Louisa Lim, who is monitoring developments from Beijing, says more than 50,000 North Koreans will be pulled out of the zone if Pyongyang follows through on that decision. Louisa tells our Newscast Desk that "a senior North Korean official says the zone had been reduced to a theater of confrontation, quite contrary to its original nature."

She adds that it's not clear what will happen to more than 400 South Koreans still in the zone.

-- A South Korean official is warning the North may be setting the stage for another missile test. But, Louisa reports, Seoul is backing away from earlier statements that another nuclear test by the North may be imminent.

As The Associated Press writes, these reports come "amid weeks of North Korean war threats and other efforts to punish South Korea and the U.S. for ongoing joint military drills. North Korea is also angry over the U.S.-led push for U.N. sanctions over its Feb. 12 nuclear test."

But, as Louisa also reported Monday on Morning Edition, some who have visited North Korea in recent weeks say there are few if any signs in Pyongyang that the North is on a war footing. Watch for more from her on that part of the story later today.

Inside North Korea, No Obvious Signs Of Crisis