Accessibility links
A Woman's Prayer Makes Mormon History : The Two-Way Jean Stevens became the first woman to recite a prayer at a general session of the faith's semiannual conferences, which Mormons consider the most important religious gatherings of the year. 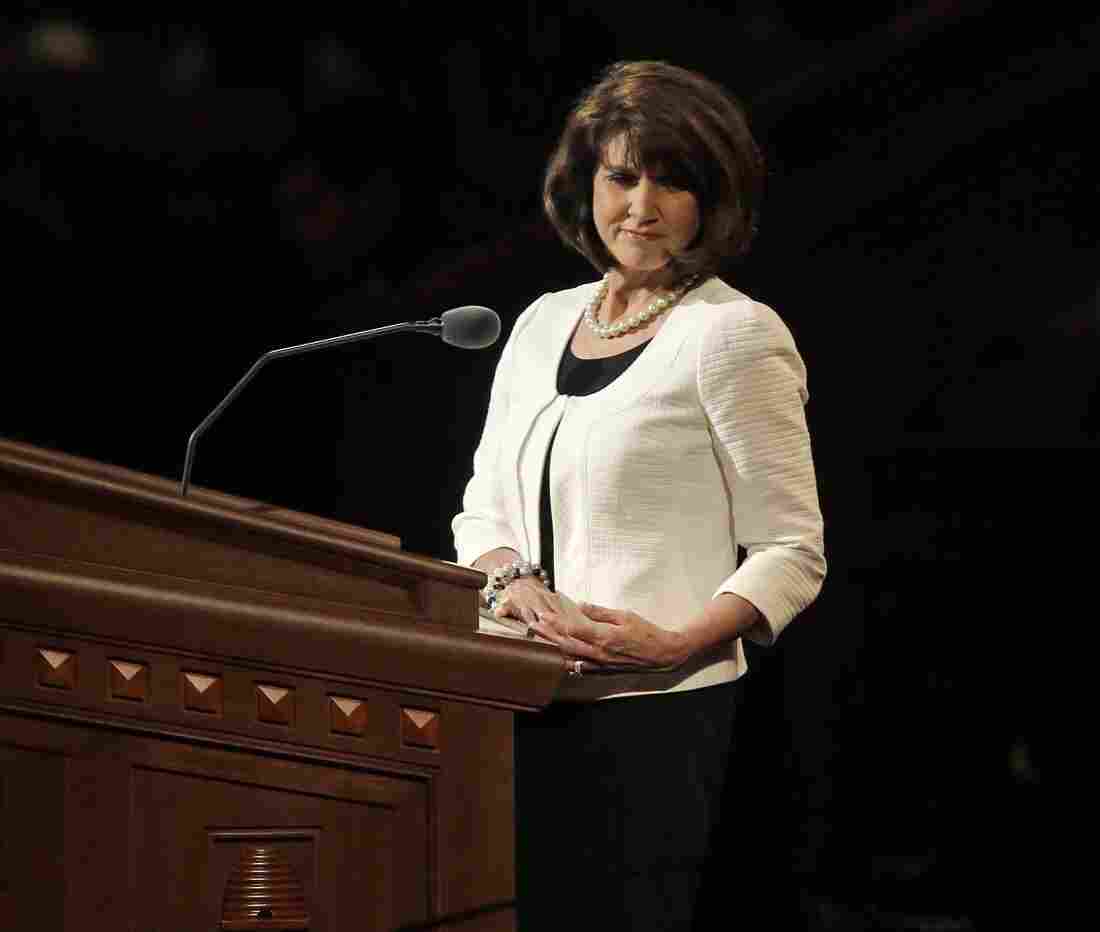 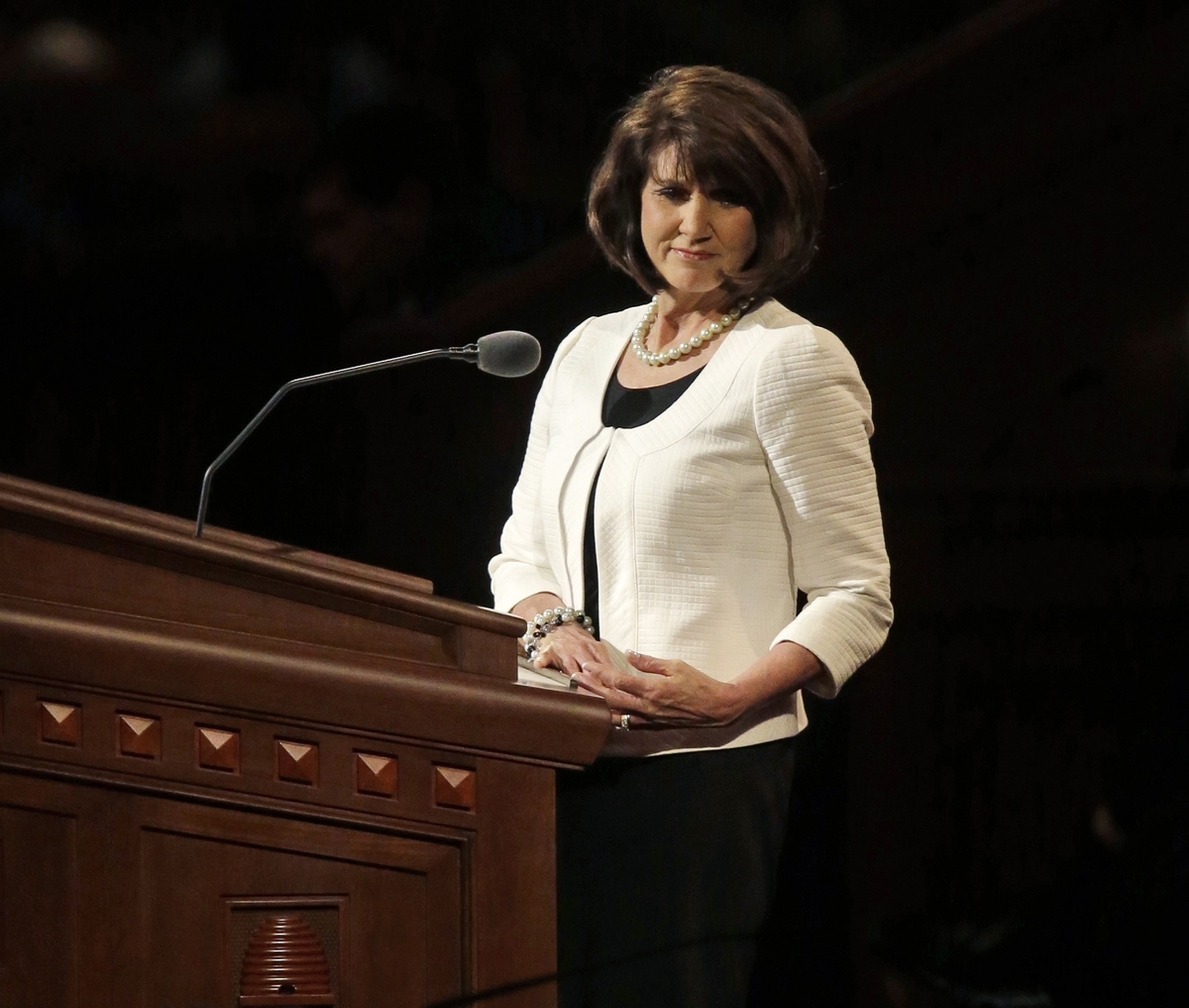 Jean A. Stevens conducts the morning session's closing prayer during the 183rd Annual General Conference of The Church of Jesus Christ of Latter-day Saints on Saturday, April 6, 2013, in Salt Lake City.

There was no formal acknowledgment of the historic moment Saturday when Jean Stevens stood at a dark wooden podium framed by potted plants and colorful flowers in the cavernous Mormon conference center in Salt Lake City.

"Our beloved father in heaven," she began, as 20,000 faithful and silent Mormons in the building listened, and as millions of others (according to Church officials) watched on television screens around the world.

Stevens became the first woman to recite a prayer at a general session of the faith's semiannual conferences, which Mormons consider the most important religious gatherings of the year.

As Peggy Fletcher Stack reports in the Salt Lake Tribune, "Mormon women have given prayers in their local congregations for more than 30 years, and have spoken at the twice-a-year church wide General Conferences for decades." But, Stack adds, "[N]o woman has ever before prayed at the general meetings."

The Tribune story includes video of the historic prayer and enthusiastic reaction from some members of the Church of Jesus Christ of Latter-day Saints, including Amanda Farr Knickerbocker of San Diego.

"I wanted my children to listen to a woman offer prayers on behalf of the entire church," Knickerbocker told the Tribune. "I wanted them to know that the church hears the voices of women, and that God does, too."

Some Mormon women have lobbied for full religious and gender equity in the Mormon faith, a patriarchal religion in which men have "priesthood authority" but women do not. Men hold positions of ecclesiastical power and authority. Women serve in "auxiliary" leadership roles in what are known as the "Relief Society," "Young Women" and "Primary" organizations.

Stevens is a high-ranking leader in Primary, an educational arm facilitating religious instruction for children 11 and under.

Later Saturday, a far smaller gathering of about 100 people at the University of Utah focused on achieving for Mormon women "the same ecclesiastical authority as men," as Dan Bammes of NPR affiliate KUER reports.

"I think the tragedy is underutilizing the other half of the population of the church," Wheelwright said at the event, which was organized by ordainwomen.org. "I think that any institution that underuses over 50 percent of its population is really suffering. And so this would be a way to really invest in an institution that we love and want to contribute to."

In January, a "let women pray" letter-writing campaign targeted Mormon leaders but Mormon Church spokesman Scott Trotter told the Tribune at the time that "decisions on speakers and prayers at General Conference were made many weeks ago."

On Friday, the day before this weekend's conference began, the official Mormon Church website posted a video discussion featuring the top leadership of the faith's women's organizations.

"I don't think women are after the [priesthood] authority," said Linda Burton, the General President of the Relief Society. "I think they're after the blessings" conveyed by men who have priesthood authority. "There are a few that would like both," Burton added. "But most of the women in the church are happy to have all of the blessings. That's what matters most to them."

Later in the weekend conference, another Mormon leader urged equality in marriage.

"Practices from any place or any time in which husbands have dominated wives or treated them in any way as second-class partners in marriage are not in keeping with divine law and should be replaced by correct principles and patterns of behavior," said Whitney Clayton, who supervises the operations of the Mormon Church in Utah.

The Sunday session of the conference opened with a prayer offered by another woman, Carole Stephens, a leader in the Relief Society.