Accessibility links
Mine Safety Reform Stalled Three Years After Deadly Blast : The Two-Way One critic said it was a travesty that Congress had not acted three years after the worst mine disaster in this country in 40 years. 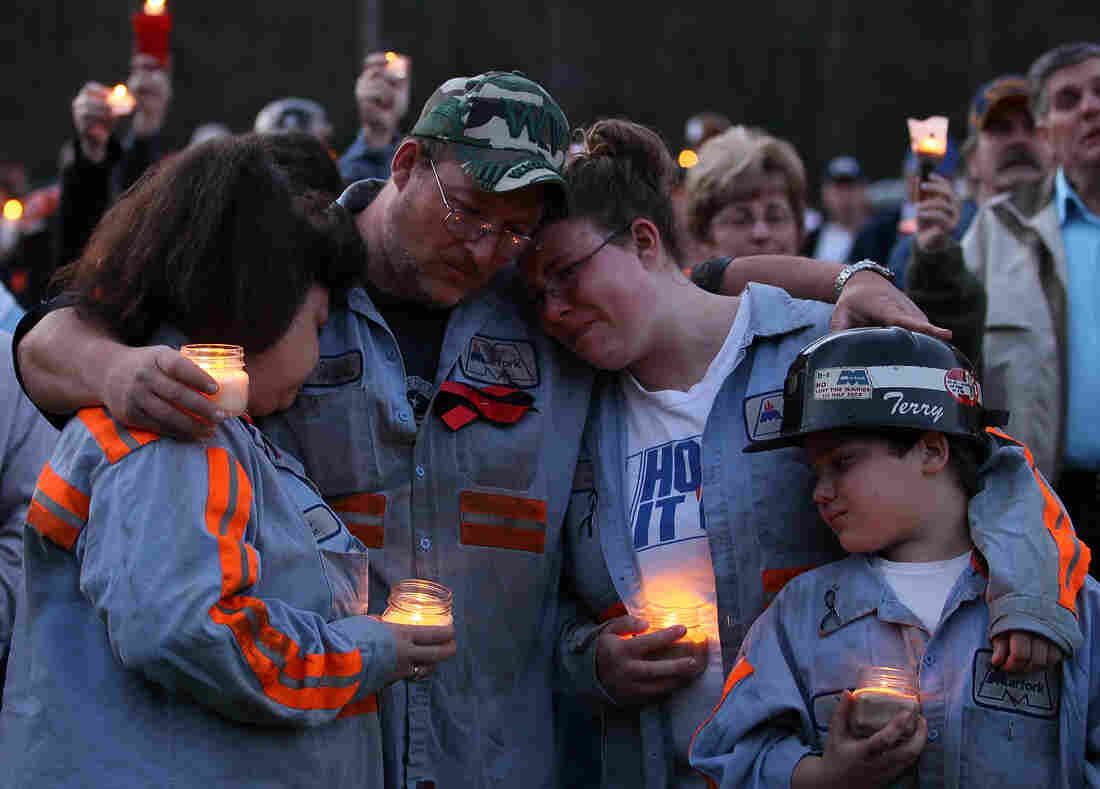 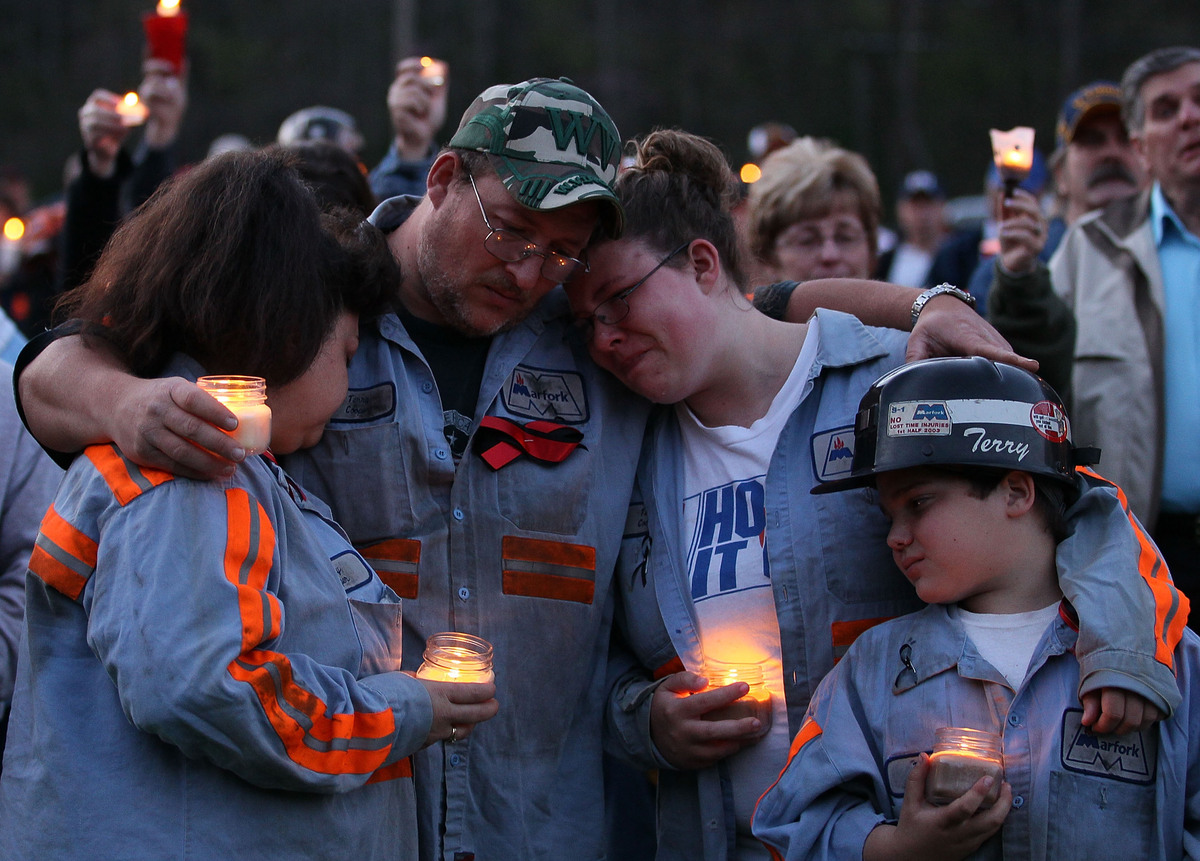 In this 2010 photo, coal miner Terry Cooper, left, embraces his wife Michelle, daughter Tera and son Justin, during a vigil to honor the coal miners that were killed in Montcoal, W. Va.

Another anniversary has come and gone. Another memorial was unveiled. Bells tolled again 29 times at precisely 3:01 p.m. in West Virginia Friday in memory of the coal miners killed three years ago at Massey Energy's Upper Big Branch (UBB) mine.

And once again, another year passes without the mine safety reform promised by members of Congress and President Obama in the wake of the worst mine disaster in this country in 40 years.

Plenty has been reported since the April 5, 2010, explosion ignited by methane gas and fed by excessive coal dust. Multiple official reports blamed a corporate culture at Massey Energy that put production before safety. The Mine Safety and Health Administration (MSHA) was also blamed for failing to fully apply its existing authority under the law.

But three years later, "It is a travesty that we have reached this point so long after this tragedy occurred and Congress still has not done anything to improve mine safety and health laws," says Cecil Roberts, the president of United Mine Workers International, the union that represents many coal miners.

Two of the investigators who issued an independent report about the tragedy agree, while also criticizing state lawmakers in West Virginia for enacting mine safety legislation "many safety experts considered very weak" and then failing to implement key features of the measure.

"There have been times when courageous lawmakers at both the state and federal level responded to mining disasters with big, bold reforms, sending families the message that their loved ones had not died in vain," wrote Davitt McAteer, a former federal mine safety chief, and Beth Spence, a coal mine safety activist who helped investigate the explosion.

"Sadly, in response to UBB, protections of miners have diminished, known safety remedies have been neglected and new technologies aren't being implemented," McAteer and Spence added in an op-ed commentary in the Charleston Gazette.

"The inaction is shameful," said George Miller (D-CA), ranking member of the House Education and the Workforce Committee. "On this anniversary, every elected official should remember our responsibility to those miners who make a living in a dangerous job, not to special interests so shortsightedly and recklessly invested in the status quo."

Democrats failed to pass new mine safety legislation in 2010 when they controlled both houses of Congress and the White House. Miller says the effort then "bumped up against a clock and the usual special interest opposition."

House Democrats are trying again with reintroduced legislation that would give federal regulators the ability to get tough with habitual safety violators and shut down dangerous mines.

John Kline (R-MN), the chair of the House Workforce Committee, didn't mention the revived mine safety bill in his statement marking the UBB anniversary. Kline obliquely noted that "efforts to strengthen federal mine safety protections continue."

MSHA chief Joe Main sent out an op-ed piece to newspapers across the country, touting his agency's tougher enforcement in the last three years, including a series of surprise inspections targeting coal mines with repetitive violations. Main also takes credit for using for the first time ever one of MSHA's toughest enforcement tools — a "Pattern of Violations" program that spots habitual safety lapses and subjects mine operators to extra scrutiny and even possible shutdowns.

But Main didn't mention that his agency failed to use that and other enforcement tools at Upper Big Branch and with Massey Energy before the deadly explosion.

The Labor Department Inspector General issued a report last week giving MSHA mixed marks on its response to the disaster, noting that the agency had made "significant progress" in implementing changes not requiring new legislation but had yet to implement or even schedule nearly four dozen recommendations contained in its own internal review of the tragedy.

This week, MSHA announced that mining injury and death rates last year were at record lows. "These preliminary numbers clearly show that actions undertaken by MSHA and the mining industry continue to move mine safety in the right direction," Main said in a statement.

But earlier this year, the agency issued a warning about a recent and sudden spike in mining fatalities. And last month, Senate and House Democrats scolded the Labor Department for responding to congressional sequestration budget cuts by sharply curtailing one of the Obama Administration's major safety responses to the UBB disaster.

Lawyers hired to clear up a backlog of thousands of cases involving mine safety citations and fines now face layoffs, the lawmakers said. The backlog had delayed final action on serious violations for years, essentially negating a major enforcement tool and neutralizing the deterrent effect citations and fines are supposed to provide.

In response, the Labor Department said the effort was already scheduled for a phase-out.

Ken Ward, the veteran coal industry reporter at the Charleston Gazette, recalls the words of the late Sen. Robert Byrd (D-WV) in his own look at the Upper Big Branch disaster and the three years of action and inaction since.

Byrd once spoke about the predictable aftermath of mine tragedies:

"First, the disaster. Then the weeping. Then the outrage. And we are all too familiar with what comes next. After a few weeks, when the cameras are gone, when the ink on the editorials has dried, everything returns to business as usual. The health and the safety of America's coal miners, the men and women upon whom the Nation depends so much, is once again forgotten until the next disaster."

Filled with hubris, Byrd then added this.

"But not this time."

This time, says Judy Jones Petersen, a physician who peered into a body bag at the unrecognizable remains of her brother, an Upper Big Branch miner, "We, as a family, are still seeking justice for my brother Dean."

Dean Jones is a name now etched in gold lettering on a new monument with 28 other names at the Raleigh County Courthouse in Beckley, W. Va.