Accessibility links
Bipartisan Bill Would Extend Background Checks To Gun Shows : The Two-Way Democratic Sen. Joe Manchin of West Virginia and Republican Sen. Pat Toomey of Pennsylvania have a plan that could get bipartisan support. It would close the so-called gun show loophole but allow friends and family members to trade guns without going through background checks. 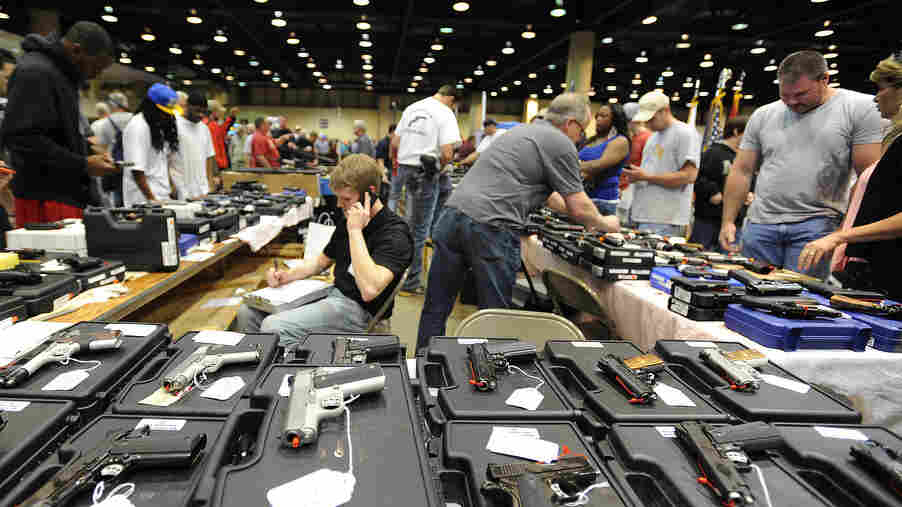 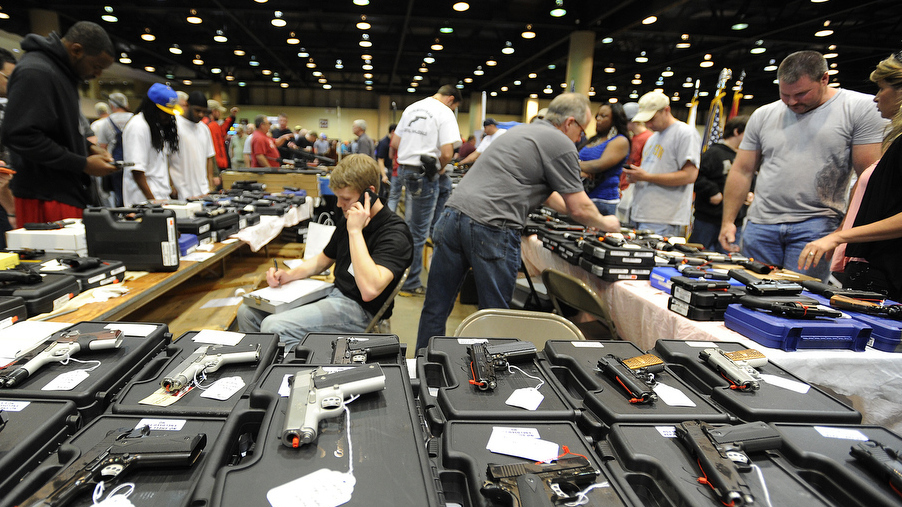 The scene at a gun show in Alabama last month.

Saying "this is a start and it's not the end of our work," Democratic Sen. Joe Manchin of West Virginia confirmed Wednesday morning that he and Republican Sen. Pat Toomey of Pennsylvania have put together a bipartisan plan that they believe will "keep guns out of dangerous hands."

"I don't consider criminal background checks to be gun control," Toomey added. "I consider it to be common sense."

Asked whether his support for this plan might put his "A" rating from the National Rifle Association at risk, Toomey told reporters that "what matters to me is doing the right thing."

Manchin said he has spoken with "my friends in the gun culture of West Virginia" and that "they understand this is common sense."

The senators said they also will be calling for "a commission on mass violence" with experts on guns, mental illness and school safety included in its membership.

CNN is reporting that Rep. Peter King, R-N.Y., said he will introduce the legislation in the House.

As we reported earlier, the Manchin-Toomey proposal is due to be introduced as an amendment to Democratic-backed gun legislation that the Senate is due to begin debating Thursday.

Update at 1:50 p.m. ET: Highlights of the Manchin-Toomey plan, which the senators are calling "The Public Safety and Second Amendment Rights Protection Act," are online here.

Our original post, at 10:36 a.m. ET — 'Friends And Neighbors' Exception Part Of Deal On Gun Checks:

With the Senate set to vote on Democratic-backed gun control legislation that a group of Republicans have promised to filibuster, there's word that two key senators have put the finishing touches on a compromise over one key issue — "universal" background checks for gun purchasers.

Politico, which says it has obtained a "fact sheet" about the compromise "from a representative of one of the gun control groups involved in the talks," writes that:

"The deal would close the so-called gun show loophole, requiring that background checks are conducted on all commercial gun sales in the country. ... When a sale occurs, the buyer and seller would meet at a licensed dealer, who would conduct the check. ...

"The fact sheet stresses that the dealer records would help law enforcement trace guns recovered at crime scenes. However, person-to-person sales — the 'friends and neighbors exceptions' would not be subject to a check."

That last provision, about sales between friends, family members and neighbors, has been among the issues that opponents of new gun laws have been concerned about. They make the case that requiring background checks for such sales would be too much of a burden.

But so-called straw purchases, when a person with a clean record buys a gun for someone who legally couldn't make such a purchase, also are of concern. The Hill says the Manchin-Toomey plan includes "a bipartisan provision to enact tougher penalties on straw purchasers."

According to Politico, the Manchin-Toomey deal "would be offered as an amendment to an existing Democratic gun bill."

The Hill adds that:

We'll monitor the senators' news conference and update this post.