Accessibility links
The Immigration Movement: Without A Unified Leader, But On The Cusp Of Success : The Two-Way The decentralization was on display during a march on Washington on Wednesday, which was organized by a disparate group of activists. But experts and protesters said not having a national leader gave them a political advantage.

The Immigration Movement: Without A Unified Leader, But On The Cusp Of Success

The Immigration Movement: Without A Unified Leader, But On The Cusp Of Success 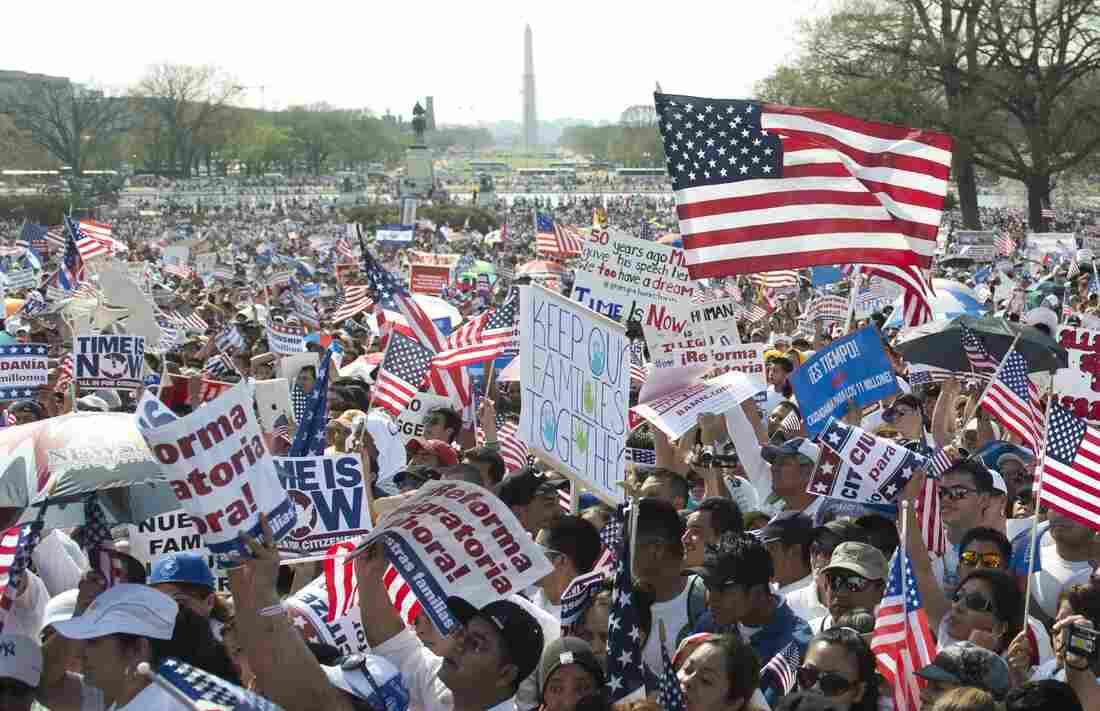 Thousands of immigration reform supporters march in the "Rally for Citizenship" at the Capitol in Washington, D.C., on Wednesday. Saul Loeb/AFP/Getty Images hide caption

The atmosphere was different today.

"We have hope," Elsa Flores said. She was demonstrating with thousands of other protesters in Washington on Wednesday, demanding a path to citizenship for an estimated 11 million undocumented immigrants.

Flores looked toward the U.S. Capitol dome, which was brilliant under an unusually hot spring sun. Unlike 2006, when hundreds of thousands of immigrants spilled onto the streets of city centers across the country, the representatives and senators inside that building seem poised to make comprehensive immigration reform a reality.

The immigration movement is on the cusp of a major victory, but it got there without a charismatic, clear leader and without a cohesive national campaign. In a lot of ways, this march was a perfect example of that.

You could see it in the signs that protesters carried: They were printed by labor unions, community and women's groups, LGBT and human rights groups. You could see it on stage: Top billing went to the NAACP's Benjamin Jealous, but he also shared the stage with others like Latin pop artist Olga Tañon, the poet Elizabeth Alexander, Service Employees Union President Mary Kay Henry and the United Auto Workers' Bob King.

I walked among the marchers and asked a few people a simple question: Who's the voice of this movement? Who's the leader?

No one could come up with a name.

"I guess it's us," Emily Arreguin, 17, said after taking a moment to think about it.

Shanta Driver is the national director of the Coalition to Defend Affirmative Action, Integration & Immigrant Rights and Fight for Equality By Any Means Necessary. Her group traveled from California and Michigan. She said that by Easter, only 23 people had signed up for the trip to Washington.

"But those people became organizers," she said, as her group marched across Pennsylvania Avenue. In a couple of weeks, the 23 originals had filled five buses with recruits.

"People think we've got to get this done ourselves," Driver said. 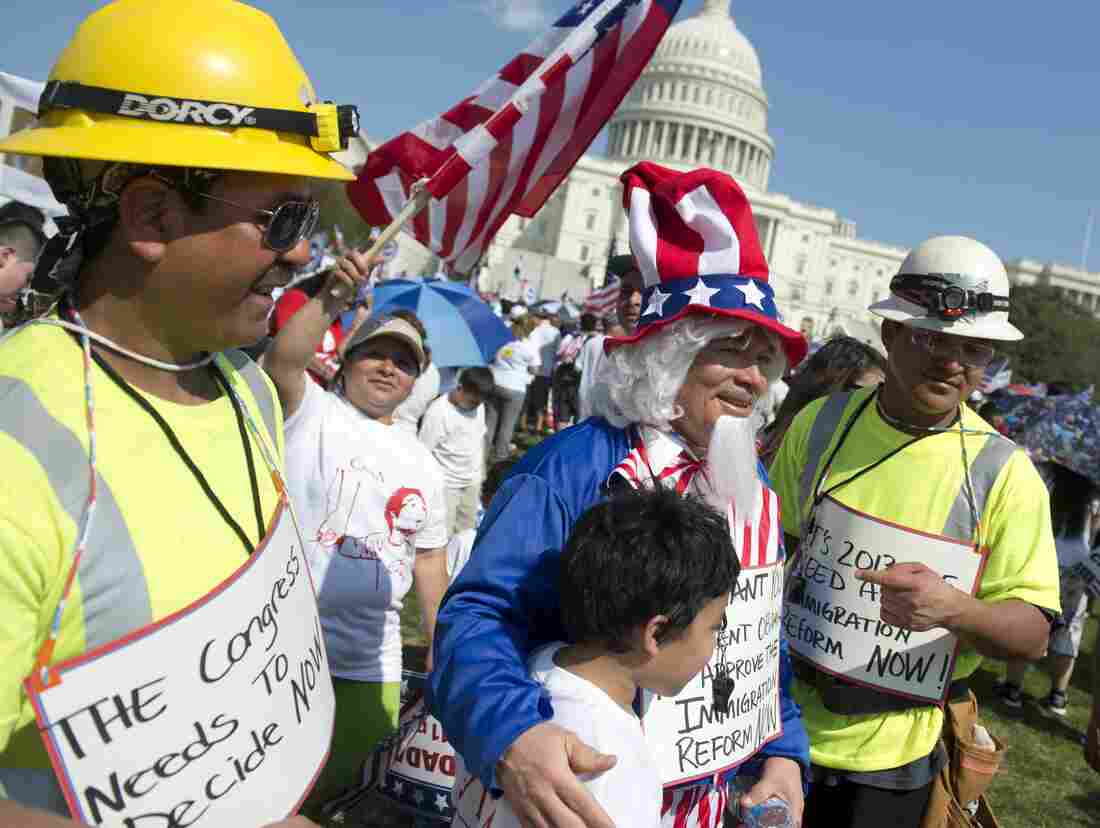 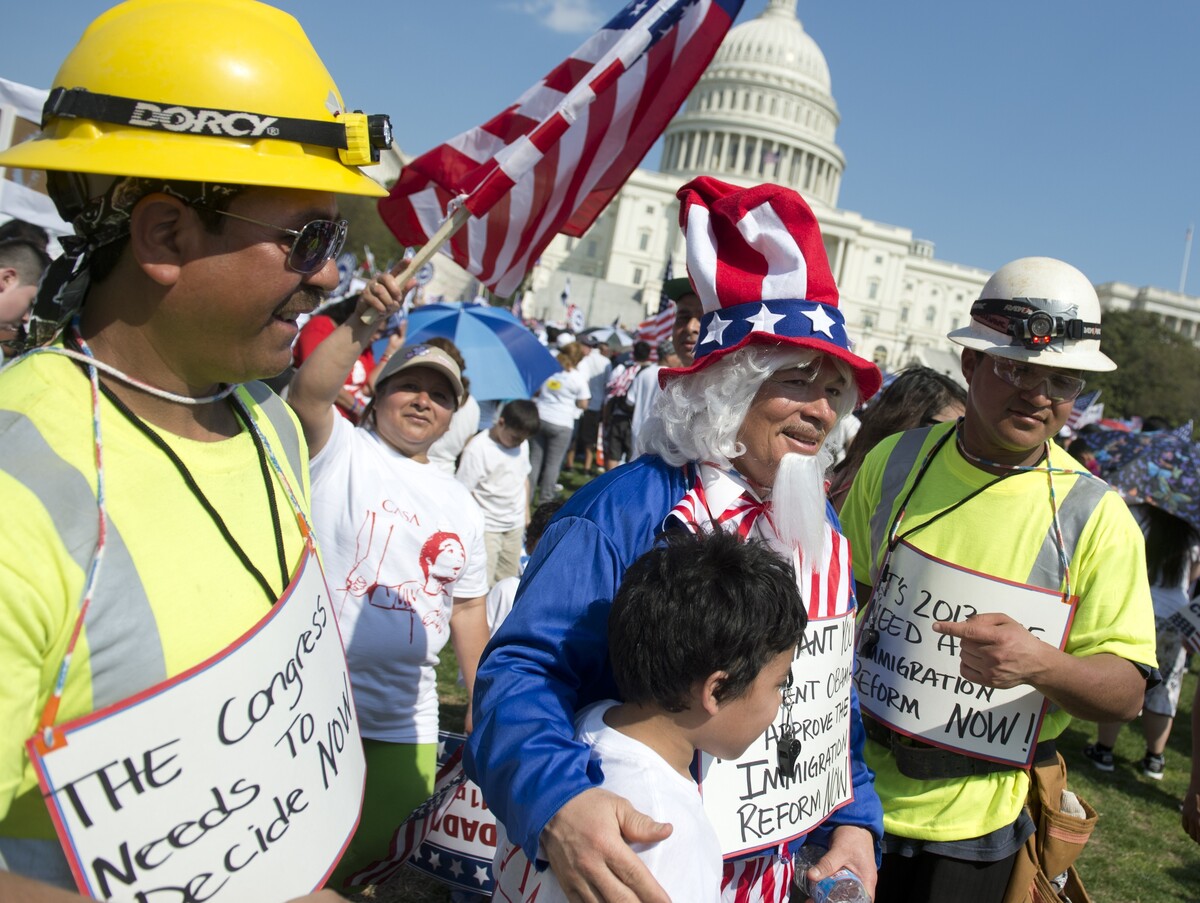 A man dressed as Uncle Sam poses for photos at the demonstration.

"I actually don't think there is a centralized leader," Giovagnoli said in a phone interview. "In a lot of ways, I think it's a strength."

Giovagnoli said the immigration movement was born with national and local activists advocating for very specific interests. Some, for example, advocated for farm workers, others may have advocated for Africans seeking asylum.

"It really only became the case in the last decade that the sheer volume of issues in the immigration world were so many, so severe, that people started to recognize it was a big issue," said Giovagnoli.

By the time it bubbled up to the national level, the movement remained decentralized. She said there is a coalition of grassroots organizations called the Fair Immigration Reform Movement, but they're very careful to not make the issue about "one person, or group or ethnicity."

"I think that's a strength," said Giovagnoli. "It's allowed an even broader coalition of people to come to the table."

"It means people can be smart and strategic and thoughtful about what voice they want to use," she said. In other words, in some parts of the country, the movement may use a business leader to lobby politicians, whereas in another state they may use the civil rights angle or in another they may use a child who was brought into the country illegally by their parents.

"I do think one of the things you are seeing is the maturing of the immigration movement," Giovagnoli said.

Back at the rally, the crowd certainly looked diverse: There were African Americans, Asians, Indians and a great many Latin American countries represented. It was also very much an emboldened movement. It's not just any immigration reform they seek; it's citizenship for all 11 million.

Sally Pillay, originally from South Africa, was by the Capitol Reflecting Pool. She was holding a sign for IRATE & First Friends, the New Jersey-based immigrant rights organization she works for.

I asked her, "So who's the national leader, here?"

"The people," she said, without hesitating. She said throughout the 2012 elections, the people spoke. "It's time for change."