Accessibility links
'He Saved Hundreds': Army Chaplain Gets Medal Of Honor : The Two-Way Emil Kapaun is being honored for his "extraordinary heroism" during the Korean War. The Catholic priest, who died in a prisoner of war camp in 1951, is also a potential candidate for sainthood.

Listen
'He Saved Hundreds': Army Chaplain Gets Medal Of Honor 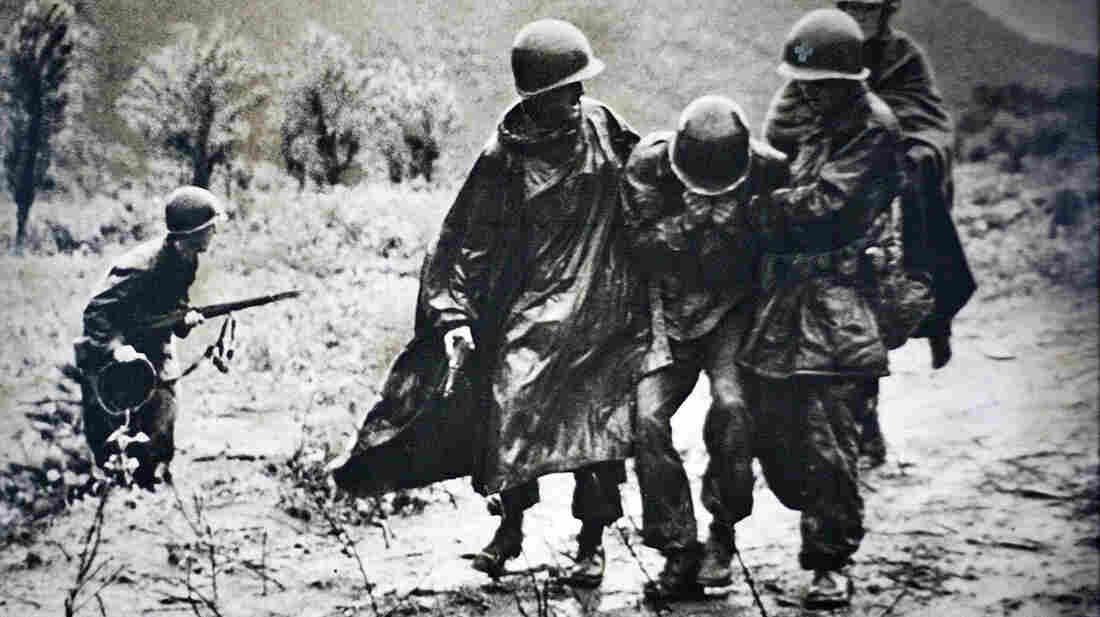 In this copy of a photograph on display at Kapaun Mt. Carmel Catholic High School in Wichita, Kan., a wounded soldier is helped by Army chaplain Emil Kapaun (on the soldier's left) during the Korean War. The Kansas native died a prisoner of war in 1951. Mike Hutmacher/MCT/Landov hide caption 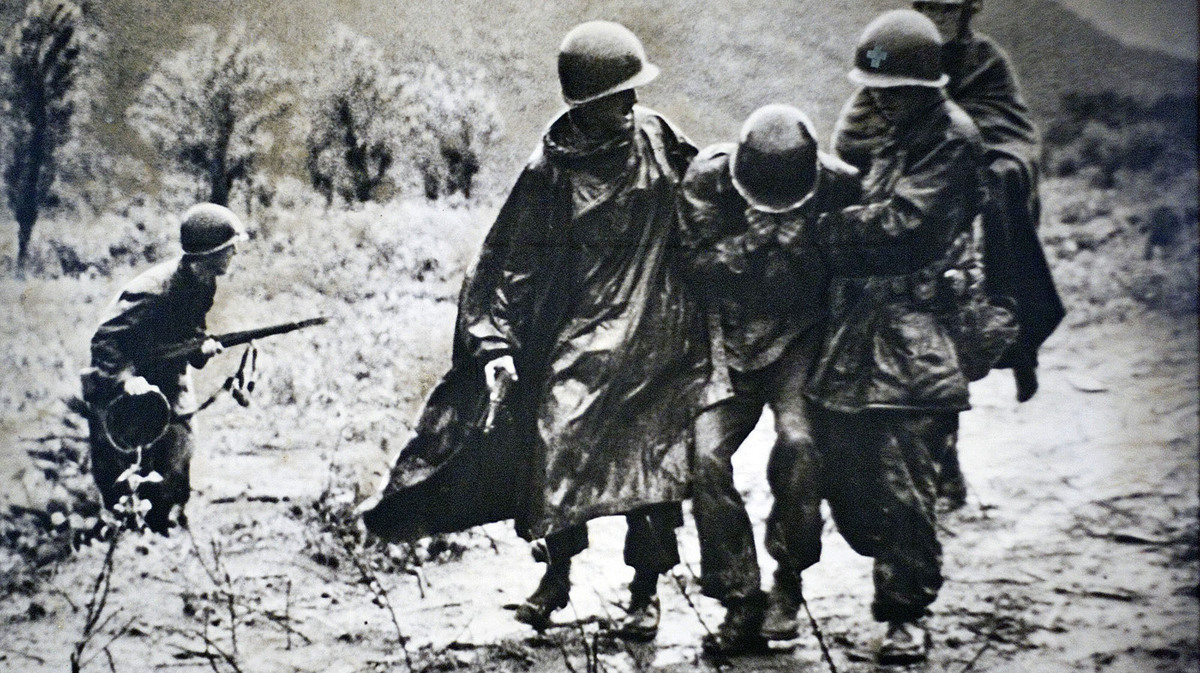 In this copy of a photograph on display at Kapaun Mt. Carmel Catholic High School in Wichita, Kan., a wounded soldier is helped by Army chaplain Emil Kapaun (on the soldier's left) during the Korean War. The Kansas native died a prisoner of war in 1951.

It took more than 60 years, but an Army chaplain who died as a prisoner during the Korean War will be awarded the Medal of Honor by President Obama on Thursday. 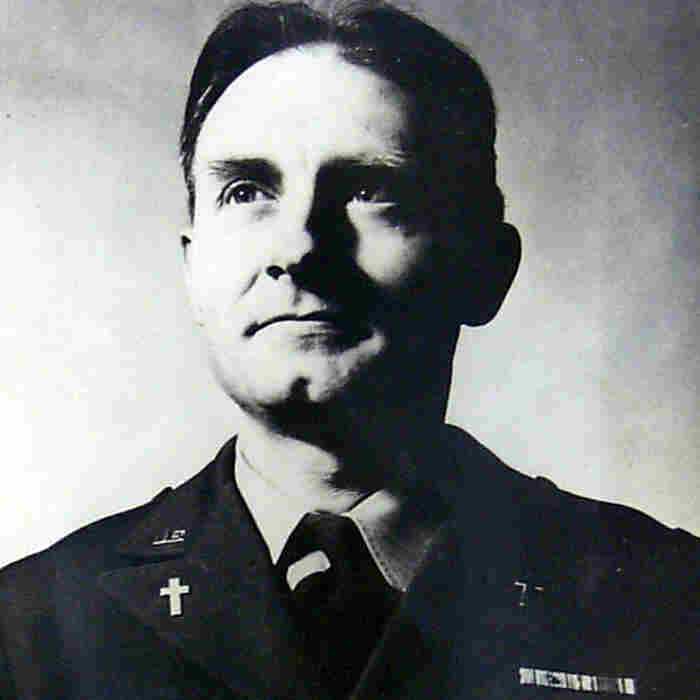 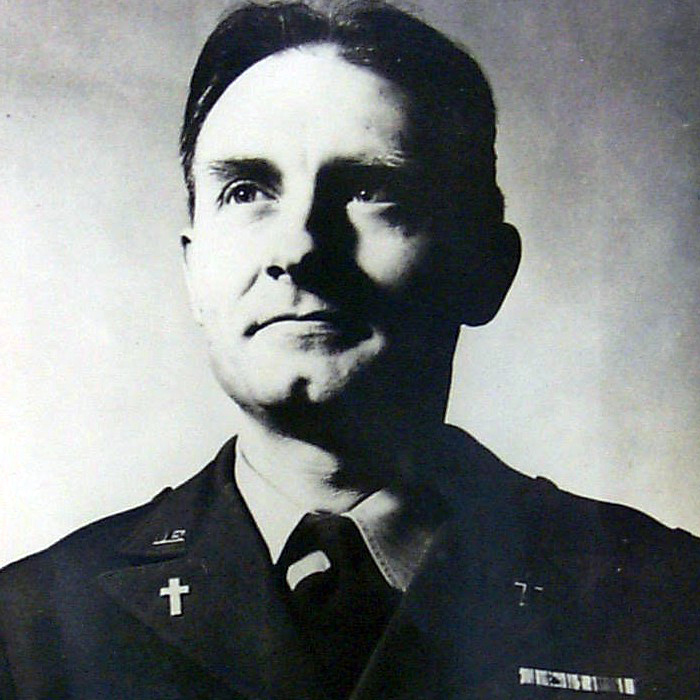 Capt. Emil Kapaun was a Catholic priest serving with the 3rd Battalion, 8th Cavalry Regiment, 1st Cavalry Division who died at age 35 in 1951. And he's not only a war hero — the Catholic Church is also looking into whether he should be made a saint.

Kapaun will be honored for "extraordinary heroism" during fighting at Unsan, Korea, and after his capture by enemy troops in November 1950. The White House says:

"When Chinese Communist Forces viciously attacked friendly elements, Chaplain Kapaun calmly walked through withering enemy fire in order to provide comfort and medical aid to his comrades. When they found themselves surrounded by the enemy, the able-bodied men were ordered to evacuate. Chaplain Kapaun, fully aware of his certain capture, elected to stay behind with the wounded."

Herbert Miller, who served with Kapaun, describes in a video on The Wichita Eagle's website what happened after he was wounded at Unsan: 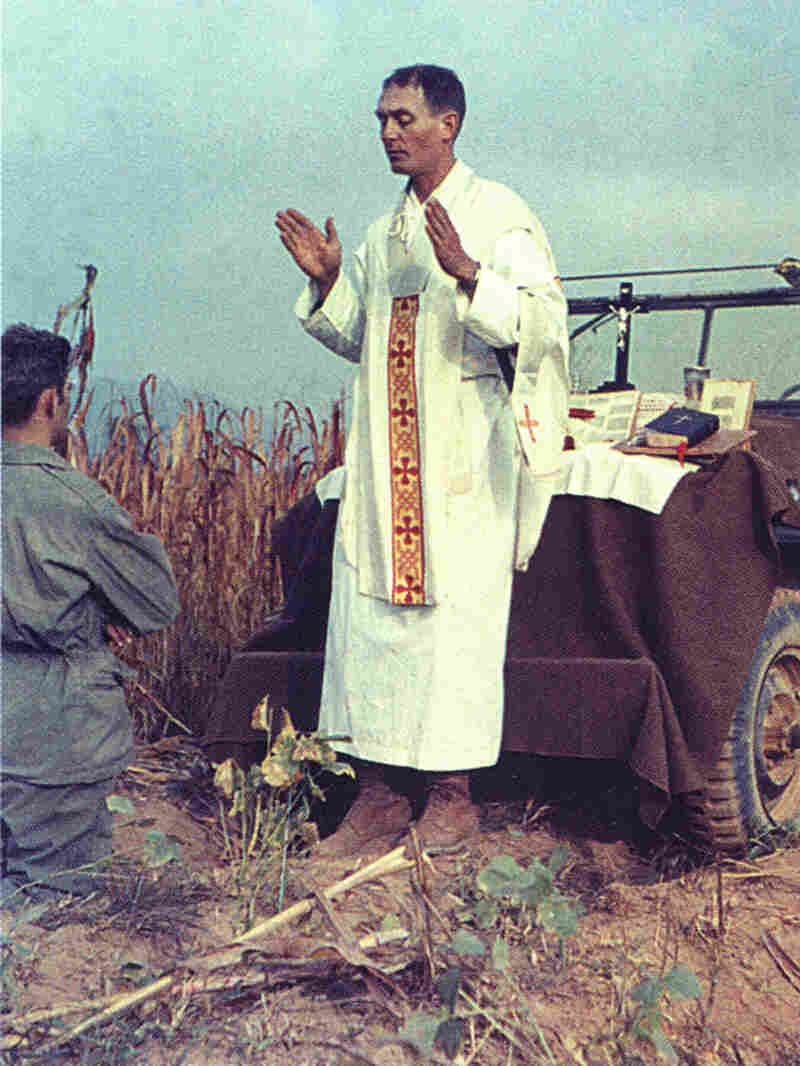 In a photo released by the Catholic Diocese of Wichita, Kapaun says Mass in the field during the Korean War. AP hide caption 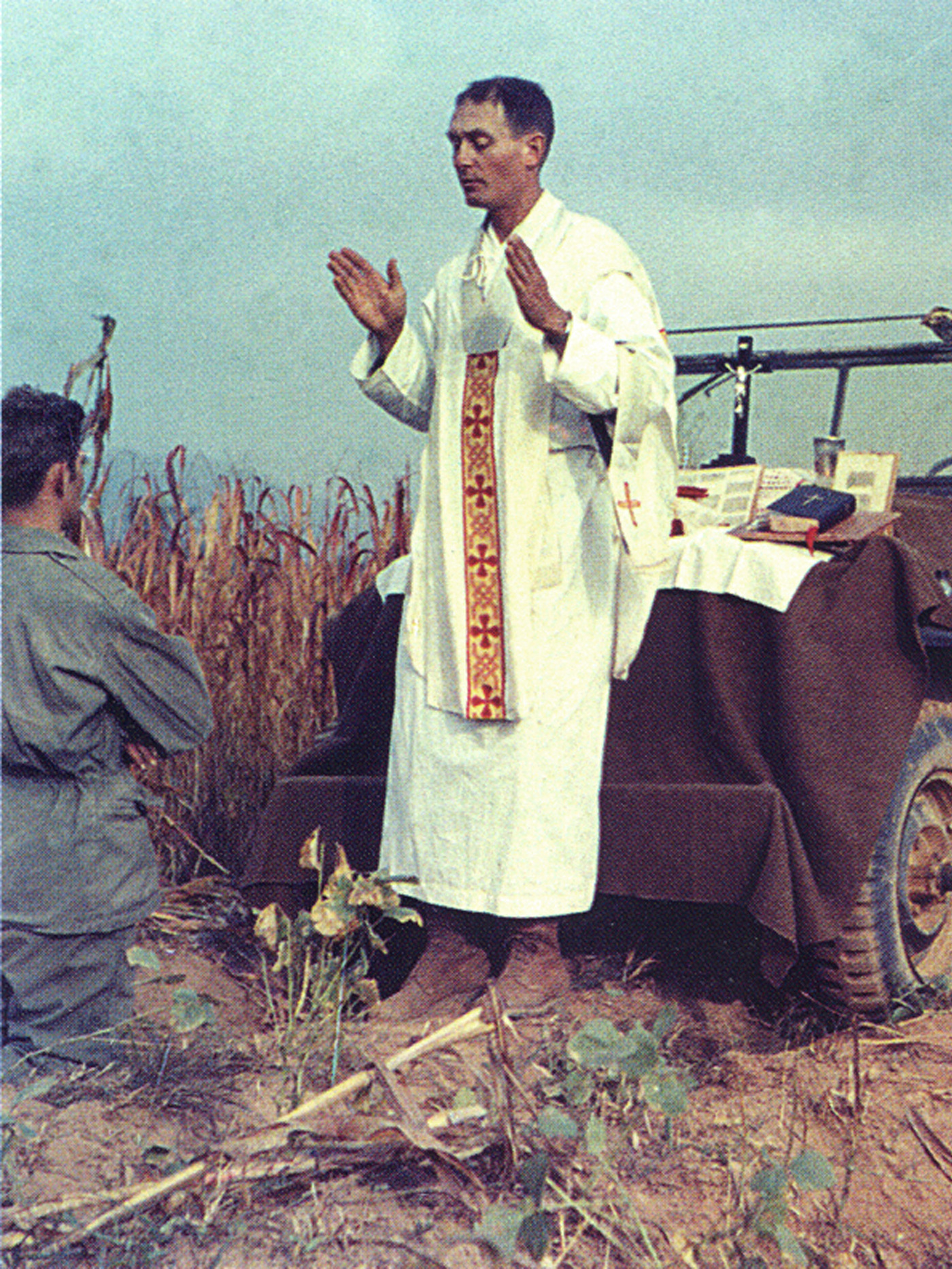 In a photo released by the Catholic Diocese of Wichita, Kapaun says Mass in the field during the Korean War.

"They threw a grenade, and that's when I got hit. I couldn't get out of the way. Broke my ankle and I laid there in the ditch till daylight. And I [saw] Koreans and Chinese coming in that ditch, so I just laid down, played dead and they went on by me. ... That afternoon, I [saw] them coming again and I said, 'Well, this is all it.' So I was laying there and this Korean come down through ... and that Korean stood over me with a gun ready to shoot. And he stood there, he hesitated — why I don't know — but pretty quick Father Kapaun came from across the road. I didn't know what his name was ... I did know he was a chaplain. He bent, pushed that guy aside, bent down, picked me up and carried me."

Miller and other soldiers who served with Kapaun have been working for years to see him awarded the Medal of Honor, according to the Eagle, which has extensive coverage of Kapaun, a Kansas native.

Fellow captives said the chaplain's "most courageous acts followed in a prisoner of war camp, where Kapaun died in May 1951. They said he saved hundreds of soldiers' lives using faith and the skills honed on his family's farm near Pilsen," the newspaper reports.

"In the prison camp, he shaped roofing tin into cooking pots so prisoners could boil water, which prevented dysentery. He picked lice off sick prisoners. He stole food from his captors and shared it with his starving comrades.

"Most of all, Kapaun rallied all of them, as they starved during subzero temperatures, to stay alive."

The White House says Kapaun's nephew, Ray, and other family members will be among those attending Thursday's ceremony. It's scheduled to start at 2:10 p.m. ET. The White House plans to stream the event here.

During the ceremony, President Obama said he couldn't imagine "a better example for all of us" to follow than Kapaun. He referred to him as "an American soldier who didn't fire a gun but who wielded the mightiest weapon of all — a love for his brothers so pure that he was willing to die so that they might live." The president said he was "truly humbled to be joined by men who served alongside" Kapaun, including Miller, who credits Kapaun with saving his life.