Accessibility links
One Gear, One Goal: Bike Is 'Good To 100 MPH,' Builder Says : The Two-Way What does it take to ride a bicycle at 100 miles per hour? That's the question being explored by Britain's Donhou Bicycles and frame builder Tom Donhou, who has mounted a mammoth chainring onto a custom steel bicycle. He says the machine has already hit 60 miles per hour on the open road. 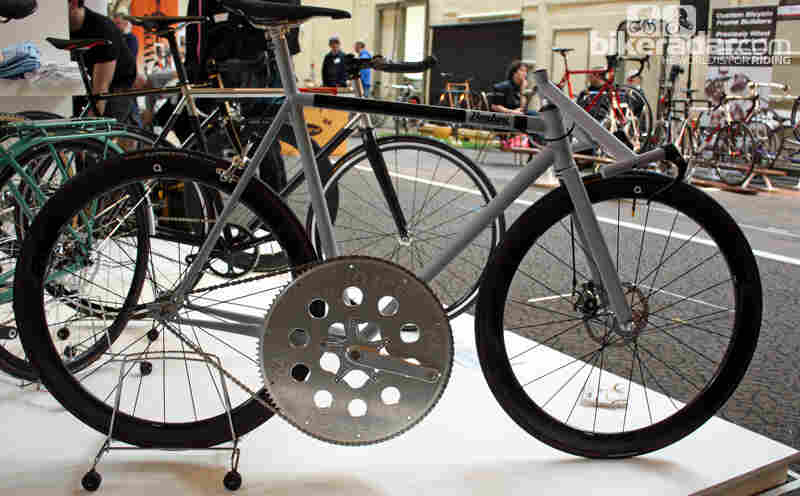 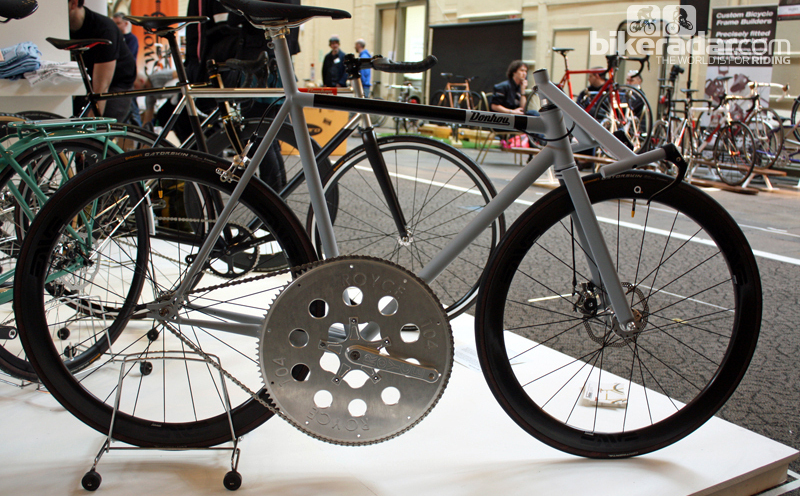 A bicycle built by British firm Donhou was created with the goal of hitting high speeds, perhaps including 100 mph.

What does it take to ride a bicycle at 100 miles per hour? That's the question being explored by Britain's Donhou Bicycles and frame builder Tom Donhou, who has mounted a mammoth chainring onto a custom bicycle. He says the steel machine has already hit 60 miles per hour on the open road.

Update At 3:30 p.m. ET: No Record At Stake. As our readers remind us, bicycles have previously reached 100 miles per hour. For instance, Jose Meiffret passed that mark in 1962, paced by a car on Germany's Autobahn. And in 1995, Dutch cyclist Fred Rompelberg reached 167 mph while using a top-fuel dragster to pace him at Bonneville Salt Flats.

While our original post didn't report that Donhou was trying to set a new world record, we've revised parts of the text to emphasize that it is his use of fairly common materials, on a hand-built bike, that captured our interest. Our original post continues:

The project began as a daydream, says Donhou, in notes accompanying the bike's display at the recent Bespoked Bristol show.

"Where I come from there's a lot of old air fields and air bases from the Second World War — long flat straight pieces of tarmac," he says. With an interest in land speed racing, he decided to build a fast bike, take it to an airstrip, "and see what kind of motorpaced speeds we could reach."

In motorpacing, a cyclist rides closely behind a lead vehicle, often a motorcycle, to benefit from the draft the motorcycle creates in its wake as it moves through the air. As a vintage Pathe newsreel video shows, the practice was once common in bicycle races held on outdoor tracks.

In contrast to the streamlined, low-lying recumbent bikes that have been clocked at more than 80 mph, Donhou's bike has more in common with millions of bicycles around the world: It's made of steel, and its frame geometry is based on a triangle.

But the similarities end there. To enforce an aerodynamic position, the bike's handlebars have been dropped down so low that the rider's hands are nearly on opposite sides of the front tire.

And at the heart of it all is a huge 104-tooth chainring, with a diameter of nearly 17 inches (for comparison, most road bikes have about 50 teeth in their largest ring). It was made by Royce, a British firm that engineers high-end bike parts — or in their words, "specialist cycle components using aerospace technology."

As Bike Radar's Oli Woodman, who spotted the beast of a bike in Bristol, says, "I certainly wouldn't want to try and turn that chainring myself!"

In his notes — which have the title "Good to 100 mph" — Donhou concludes that "what started as just a bit of fun started to get a lot more serious pretty quick and now we're gunning for a 100 mph" run.

He says the bike has been "tested to 60 mph on the road," and that it's stable at high speeds, thanks to the bike's design and the use of oval-shaped Columbus Max steel tubes, which help increase the frame's stiffness.

Donhou's dream of hitting 100 mph brings to mind American Charles Murphy, who faced ridicule when he promised to ride his bike at 60 mph. As his nickname — "Mile-A-Minute" Murphy — implies, Murphy reached that mark back in 1899.

A cyclist who lived in Brooklyn, Murphy accomplished his feat by drafting behind a Long Island Rail Road train — similar to Donhou's plan to "motorpace" his bike. Murphy rode on a 10-inch-wide stretch of wooden planking that had been specially built onto a three-mile section of flat railroad track. And it all started with a brash statement.

"I declared that I could follow a railroad train and that there was not a locomotive built which could get away from me," he recalled, according to a Sports Illustrated article written a few years after Murphy died in 1950. "I immediately became the laughing stock of the world."

But he was timed covering one mile at 57.8 seconds — and in one stretch that day, Murphy blistered a quarter-mile at 15.6 seconds, according to a story on the Bike Reader site.

As the U.S. Bicycling Hall of Fame notes, Murphy "won League of American Wheelman titles from one to five miles setting 17 national records. Through his career, he broke seven world records in distance up to ten miles."

Elsewhere, we've seen Murphy's epic ride mentioned as the inspiration for the old phrase, "going to beat 60." But web searches aimed at confirming that connection are complicated by the popularity of comedian Charlie Murphy. If there are any cultural historians out there with insights, we'd love to hear from you in the comments section.