Accessibility links
Why Use A Pressure Cooker To Build A Bomb? : The Two-Way Pressure cooker bombs have long been used in places such as Afghanistan and Pakistan because they are cheap, easy to build and inconspicuous. They rely on basic principles of physics to amplify their explosive power.

Why Use A Pressure Cooker To Build A Bomb?

Why Use A Pressure Cooker To Build A Bomb? 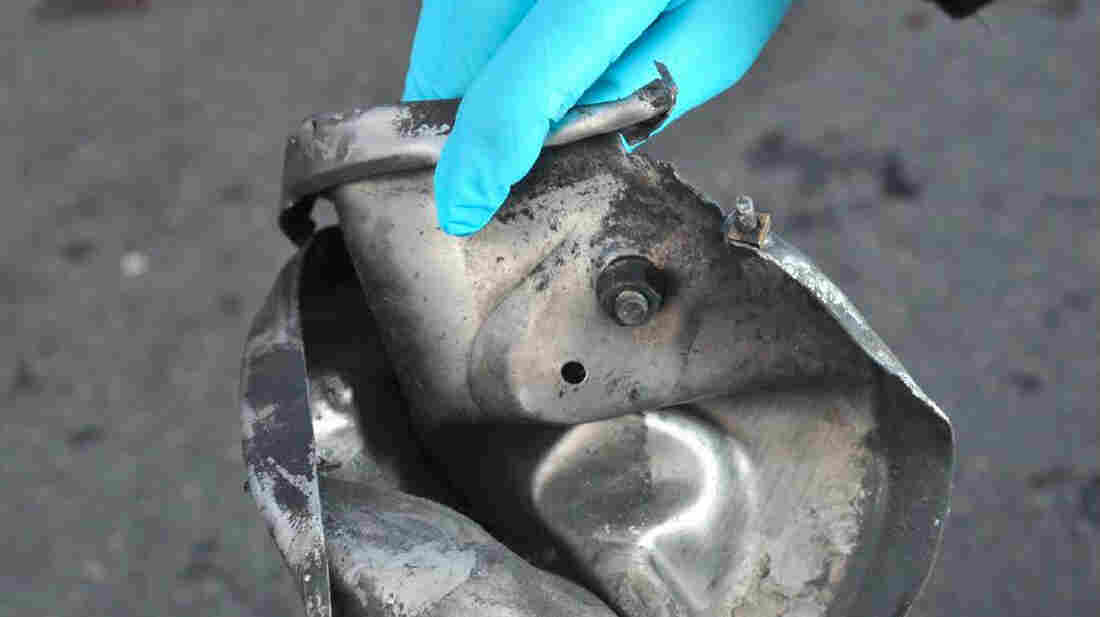 This photo, produced by the Joint Terrorism Task Force of Boston, shows the remains of an explosive device at the Boston Marathon bomb scene. Reuters/Landov hide caption

They are cheap, easy to build and inconspicuous. And as the explosions this week at the Boston Marathon show, pressure cooker bombs can be devastatingly effective weapons.

But why would someone place a bomb inside a common kitchen implement? As we explained two years ago in an article about the increased use of pressure cookers (for cooking, not bombs):

"It works using basic principles of science: Water normally boils at 212 degrees Fahrenheit — and doesn't get hotter. But under pressure, it boils at about 242 F and stays there. Raising the boiling point lets the food cook at the higher temperature, which cuts cooking time by two-thirds or more."

The same principle that increases the boiling point inside a pressure cooker also can be used to amplify the force of an explosive.

As NPR science reporter Geoffrey Brumfiel notes, "If you seal a pressure cooker, the steam builds up in the vessel. It helps to raise the temperature and cook food, but sometimes when the cooker fails, you get a very energetic release."

In the case of a bomb packed with nails and BBs, that "energetic release" propels deadly shrapnel, including pieces of the pressure cooker itself, in all directions, killing or maiming anyone in the blast path.

The pressure cooker's ability to amplify an explosion turns common black powder or smokeless powder into a much deadlier weapon, according to Denny Kline, a former FBI explosives expert and instructor in forensics at its academy. He told The Associated Press that black or smokeless powder was most likely what was used in the Boston bombs.

Bob Morris, founder of the Global Campaign Against Improvised Explosive Devices and a retired U.S. Army colonel who deployed to Iraq, explains it as "the difference between packing explosive material in a pipe bomb as opposed to wrapping it in a paper firecracker."

"Reports of pressure cookers being used as bombs go back to at least the 1990s, when they were first used by Maoists in Nepal during the civil war there, and they are still used in the mountain nation with alarming frequency," writes John Reed on Foreign Policy's National Security blog. "By the 2000s, such weapons were being found across the region at terrorist camps on the frontier of Afghanistan and Pakistan."

And, according to the AP, a bomb such as the ones used this week in Boston "probably cost around $100 to construct."

"In Afghanistan, Taliban operatives who lacked the wherewithal or expertise to build 'improvised explosive devices' capable of destroying the huge, V-shaped hull MRAPs (Mine Resistant Ambush Protected vehicles) turned to 'pressure cooker' bombs as anti-personnel devices. They would be placed along paths expected to be used by U.S. troops on foot patrol. ...

"When triggered, the blast would seek the path of least resistance and most of the force and the debris would blow out the top of the pressure cooker, in effect acting much like a military 'shaped' charge that concentrates the force of an anti-tank shell."

Here's video of a pressure cooker IED in Afghanistan in a controlled demolition:

In 2004, concern that pressure cooker IEDs might make their way to U.S. soil caught the attention of the Department of Homeland Security and prompted this warning:

It goes on to state that the devices can be made with "readily available materials and can be as simple or complex as the builder decides." And they can be "initiated using simple electronic components including, but not limited to, digital watches, garage door openers, cell phones or pagers."

(Photos taken at the blast scene show parts of what could be an electronic trigger mechanism.)

The bulletin also warns that "as a common cooking utensil, the pressure cooker is often overlooked when searching vehicles, residences or merchandise crossing the U.S. Borders."