Accessibility links
Boston On Lockdown: 'Today Is So Much Scarier' : The Two-Way With a manhunt underway for a suspect in Monday's bombings, the area in and around Boston has been virtually shut down. Transit isn't running, and most businesses and schools are closed. Most people are safe at home, but many are unnerved.

Boston On Lockdown: 'Today Is So Much Scarier'

Boston On Lockdown: 'Today Is So Much Scarier' 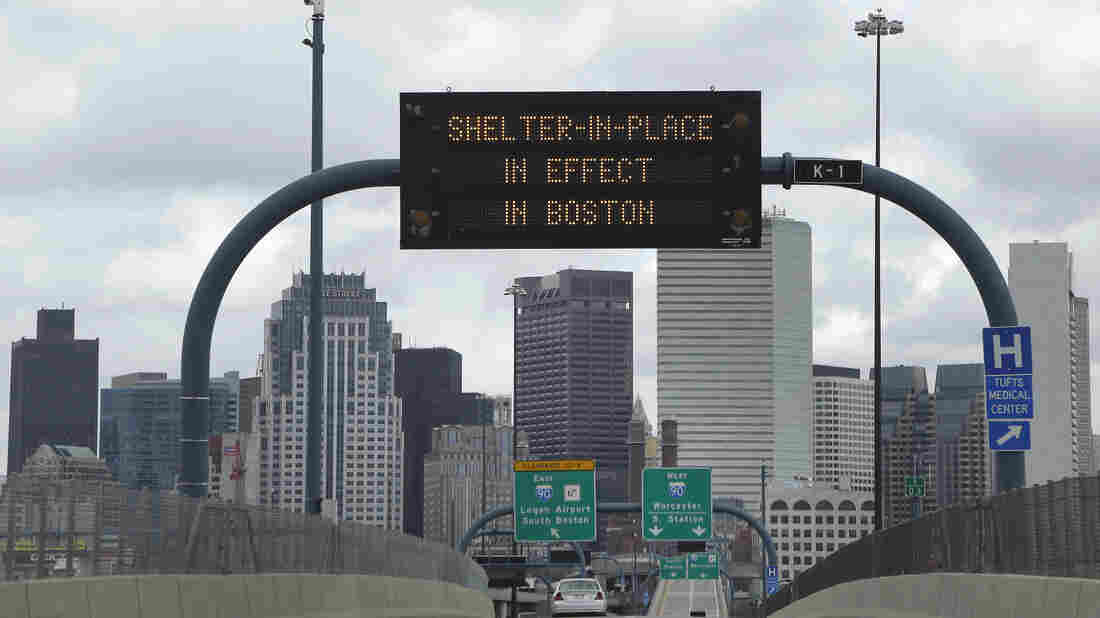 A sign calling for citizens of Boston to "Shelter in Place" hung across I-93 Friday in Boston. Elise Amendola/AP hide caption

Following reports of sudden, heavy police presence in Watertown, Boston police have asked residents to once again stay indoors. Just about an hour earlier, the governor had lifted the shelter-in-place advisory. The police tweeted: "Police operations in the Franklin Street Watertown area. Residents shelter in place."

In a news conference Friday evening, Massachusetts Gov. Deval Patrick announced that the request for residents to stay indoors has been lifted and mass transit is reopening.

The shelter-in-place requests were initially given to several Boston-area neighborhoods early Friday morning and extended to the entire city around 8 a.m. ET. Patrick urged residents to "remain vigilant" and said "there is still a very, very dangerous individual at large."

An area that's home to nearly a million people was virtually shut down Friday as police conducted a massive manhunt for a suspect in the Boston Marathon bombings.

Public transit was ordered closed, bus and subway lines stopped running, and taxi service was briefly suspended in and around Boston as authorities hunted for 19-year-old Dzhokhar Tsarnaev, known as the "white hat" suspect. His 26-year-old brother, Tamerlan — the "black hat" suspect — died in a predawn shootout with police. Many city streets looked deserted.

At a morning news conference in the suburb of Watertown, where officers were going door to door looking for the "white hat" suspect, Massachusetts Gov. Deval Patrick called on residents of Boston and Watertown to stay at home. 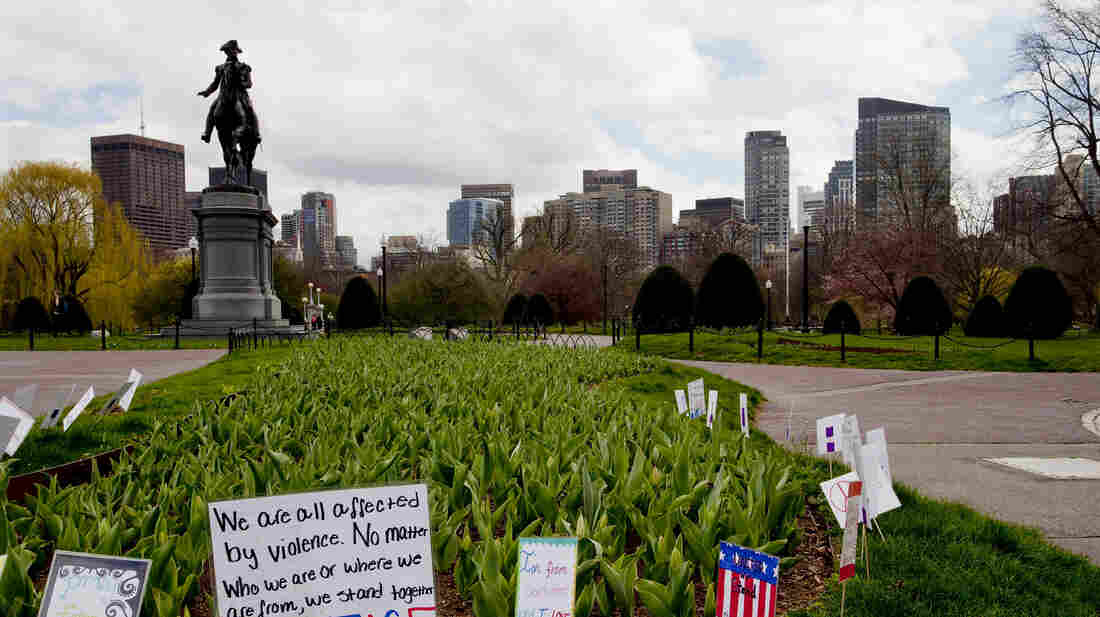 "We're asking people to shelter in place," Patrick said. "In other words, to stay indoors with their doors locked, and not to open their door for anyone other than a properly identified law enforcement officer."

The request extended to the neighboring communities of Waltham, Newton, Belmont and Cambridge.

"The scale of that [shelter in place] is incredible, perhaps unprecedented," says Frank Cilluffo, director of the Homeland Security Policy Institute at George Washington University. "It's not only to keep people out of harm's way, but also to allow law enforcement to do their jobs."

Residents of Boston and surrounding suburbs were left to wait behind closed doors until authorities signaled it was safe to return to normal life.

Tim MacArthur was home in Waltham, about five miles from the center of the manhunt in Watertown. "I can't say we feel unsafe, maybe because we know the area and know it's really not that close," said MacArthur, who works at Emerson College in Boston.

"But you do wonder — he's been on the run for hours," MacArthur said. "Certainly, on foot, he could in theory be beyond us. You wonder if these guys for the last three days have been dropping explosives in various places."

Most area businesses were closed. City employees in Boston were told to stay home or remain where they were — though Homeland Security officials later said people who were already at work were free to go home. Courthouses were shut down, and area schools were closed, including universities.

"The streets are eerily empty because of the safe-shelter policy and no mass transit," said Tom Fiedler, dean of the communication school at Boston University, who lives on the edge of the campus. "None of the businesses that I can see on Kenmore Square have opened."

Fiedler said he started to go for his usual morning run on Friday, but then thought better of it. "I decided it probably wasn't a good idea to go out running very far," he said, "with so many people running around with heavy weapons."

Public transit was shut down throughout the area. Amtrak closed its line between Boston and Providence, while taxi service was suspended in the city for several hours.

No cars were being allowed in or out of Watertown, and a no-fly zone had been instituted over the Watertown area, according to the Federal Aviation Administration.

But planes were taking off and landing at Boston's Logan Airport, where things seemed "surprisingly normal," according to NPR's Julie Rovner. Crowds were thin there, perhaps because of the difficulty of getting to the airport after the Massachusetts Bay Transportation Authority shut down public transit operations.

"The security line was short," Rovner said, "and no special precautions seemed in effect."

Along with other visitors, members of the Kansas City Royals baseball team, who were in town to play the Red Sox on Friday night, were stuck waiting at their Boston hotel, where the team set up a buffet to feed the players lunch.

"We haven't heard anything about the ballgame. That's so far down on the pecking order," team spokesman Mike Swanson told MLB.com. "We're locked in. They've told us not to leave the hotel, and every place is closed right now."

At a news conference around 12:30 on Friday, officials with the state police told reporters that state, local and federal law enforcement officers were continuing the door-to-door search in Watertown, using K-9 teams, SWAT officers and explosives experts.

Col. Timothy Alben, head of the State Police, said the search was about 60 percent complete.

Meantime, residents such as Emi Larsen were just trying to get through the day. She's a nurse at Boston's Floating Hospital for Children and was a volunteer at the Boston Marathon's medical tent on Monday. Larsen said her goal was to keep her kids entertained while they're trapped inside the house.

"My husband and I are trying not to be emotional, trying to keep them distracted," she said. "Everything is so heightened, then you have to try to paint with your kids so they're not stir-crazy in the house."

Larsen lives in Belmont, right next to Watertown. "Overnight, we heard a lot of sirens," she said during a phone interview. "Just a second ago, there were all these helicopters."

Monday's blasts had left her "feeling overwhelmed and emotional," but she said she found it calming to attend Thursday's interfaith memorial service and to shake President Obama's hand.

"It was really an emotional day, and it felt very healing," Larsen said.

But Friday's manhunt changed all that.

"Today, it's so much scarier," she said.