Accessibility links
How It Unfolded: Boston Bombing Suspect Taken Into Custody : The Two-Way The suspect had managed to stay just outside a 20-block search perimeter, but a tip from a Watertown, Mass., resident and coordinated law enforcement led to his apprehension Friday night. 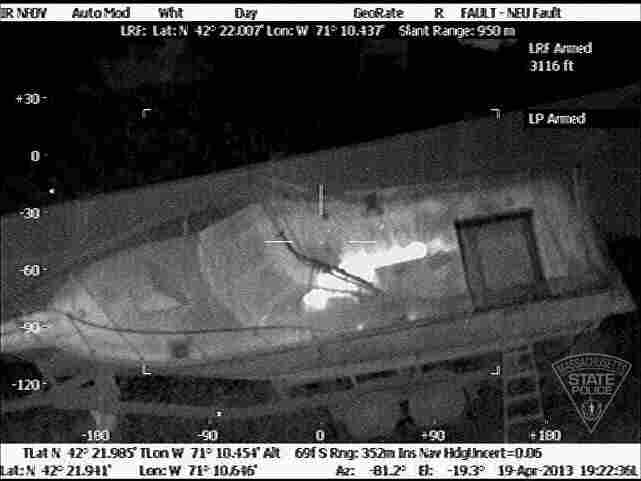 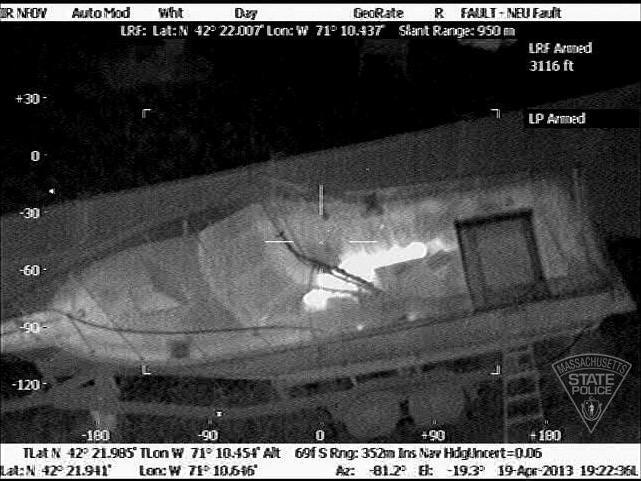 Image taken from Massachusetts State Police Air Wing during the manhunt in Watertown. Police could detect the suspect's body inside a boat in a resident's backyard.

After an hourslong "shelter-in-place" advisory ended in Watertown, Mass., a man walked into his yard Friday to find blood on the tarp covering his boat.

At a press conference Friday night, Boston Police Commissioner Edward Davis gave this and other details that led law enforcement to take the second suspect of the Boston Marathon bombings into custody.

When the Watertown resident saw the blood, Davis said, he then looked under the tarp and saw a man covered with blood. He retreated and called the police.

A helicopter overhead detected the suspect in the boat using infrared technology, according to Col. Timothy Alben of the Massachusetts State Police. The device "picked up the heat signature of the individual," he said, and directed tactical teams to the area.

Officials set up a perimeter and exchanged gunfire. Davis said a hostage rescue team attempted to negotiate with the suspect to get him out, but he said, "From what I understand, he was not communicative."

Keith Glavish, a resident who lives about five houses away from where the incident occurred, told All Things Considered, "The entire street is choked with military vehicles and police."

He described the unfolding scene in his quiet neighborhood as "surreal."

"I pinch myself to realize that this is actually unfolding, literally outside our door," Glavish said.

After about an hour, "the hostage rescue team of the FBI made an entry into the boat and removed the suspect, who was still alive in the boat," Davis said. His injuries are presumed to be from the night before.

Law enforcement spent hours combing nearby residences along 20 streets for clues as part of a massive manhunt for 19-year-old Dzhokhar Tsarnaev, called "suspect No. 2." (His older brother, Tamerlan Tsarnaev, "suspect No. 1," was killed in an exchange with law enforcement early Friday morning in Watertown.)

Despite authorities' efforts, Dzhokhar Tsarnaev managed to stay just outside their earlier perimeter.

"We thought we had the perimeter solid, and we pretty much did that, but we were about one block away," said Watertown Police Chief Edward Deveau.

After being apprehended, the suspect was taken to Beth Israel Deaconess Hospital.