Accessibility links
Outrage Erupts In India Over 5-Year-Old Girl's Rape : The Two-Way "What has changed?" That is the question echoing through Delhi on Sunday. Public frustration over sexual crimes against women is erupting again, this time over a gruesome sexual assault of a child. 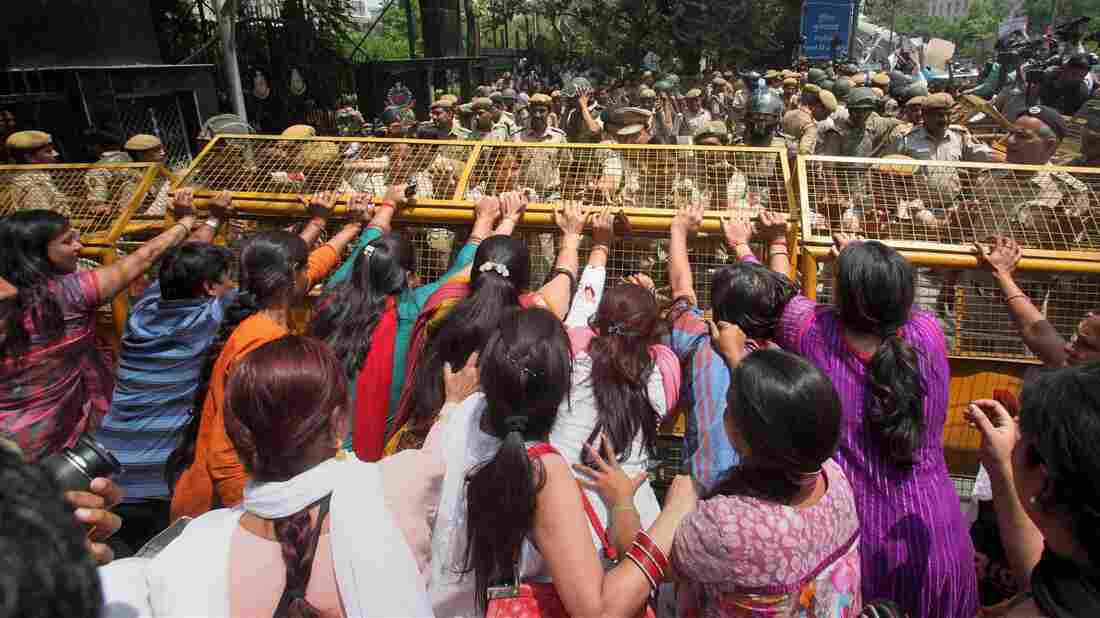 Protesters attempt to break through a barricade outside Delhi police headquarters on Saturday during a protest over the rape of a 5-year-old girl in New Delhi, India. AP hide caption 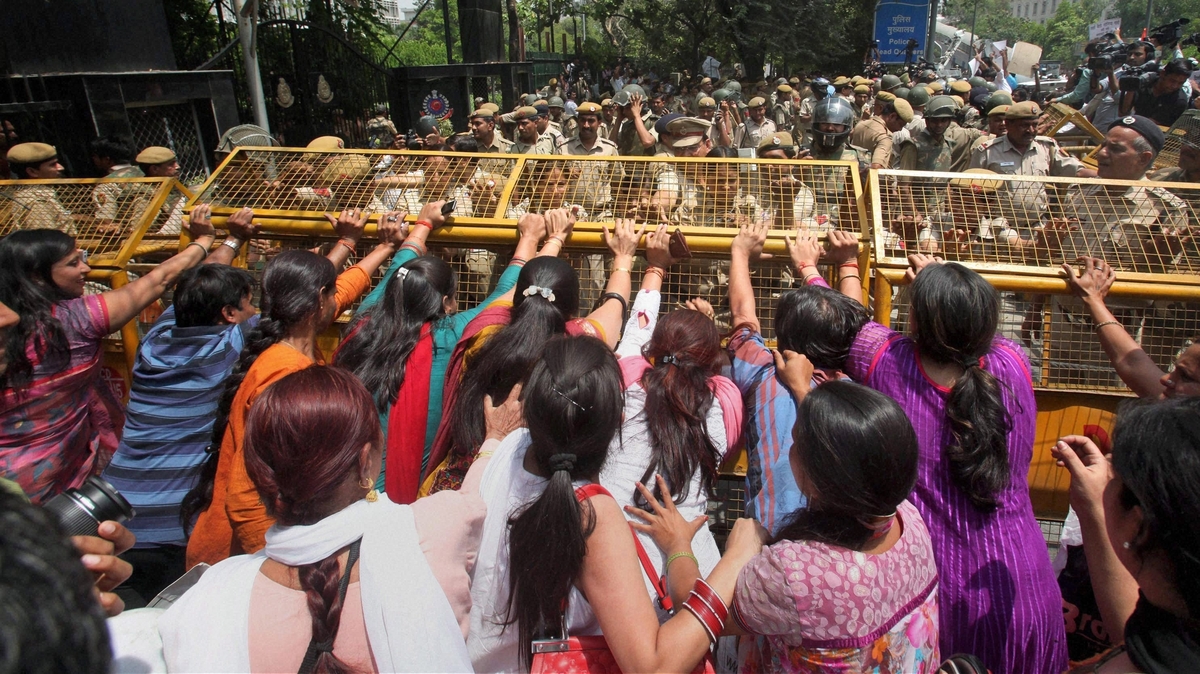 Protesters attempt to break through a barricade outside Delhi police headquarters on Saturday during a protest over the rape of a 5-year-old girl in New Delhi, India.

"What has changed?" That is the question echoing through Delhi on Sunday. Public frustration over sexual crimes against women is erupting again, this time over a gruesome sexual assault of a 5-year-old girl.

The protests are smaller than those that swept over the capital in December with the fatal gang-rape of a 23-year-old woman, but the incident has revived debate over the startling state of sexual violence in India.

Last Monday, the 5-year-old girl went missing from her home in East Delhi after going out to play. She was discovered Wednesday night when neighbors detected muffled cries in a small locked room in the same building where the girl lived. The child's family found her, bleeding and brutalized.

Doctors expressed shock at what had been done to the child. The medical team found a glass bottle and pieces of a candle forced into her private parts. "This is the first time I have seen such barbarism," R.K. Bansal, the medical superintendent of Swami Dayanand Hospital, said in a televised interview.

"There were injuries on her lips, cheeks, arms and anus area; her neck had bruise marks suggesting that attempts were made to strangle her," Bansal added.

Rising public pressure prompted authorities to move the injured girl to one of New Delhi's premier public hospitals. At the All India Institute of Medical Sciences, where girl was shifted, doctors said her vital signs are normal and that she is out of danger.

The positive turn in her condition did little to dampen the ire of protesters who rallied at the hospital.

Among them was 34-year-old businessman Zia Choudhary. "We are angry ... Every four hours, news is coming that there is a rape," he said. "This kills our souls. We also have daughters 4 and 5 years old ... Neither the police commissioner nor the Home Ministry has any effect ... For how long are they going to make fools of the people?" 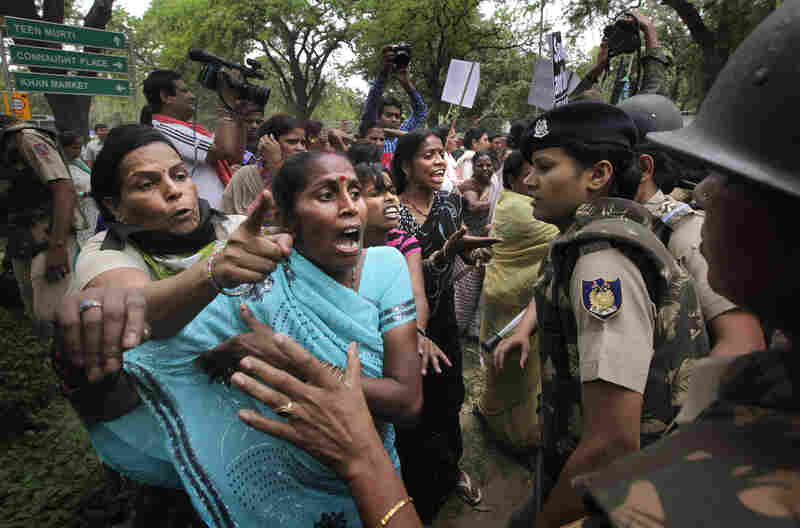 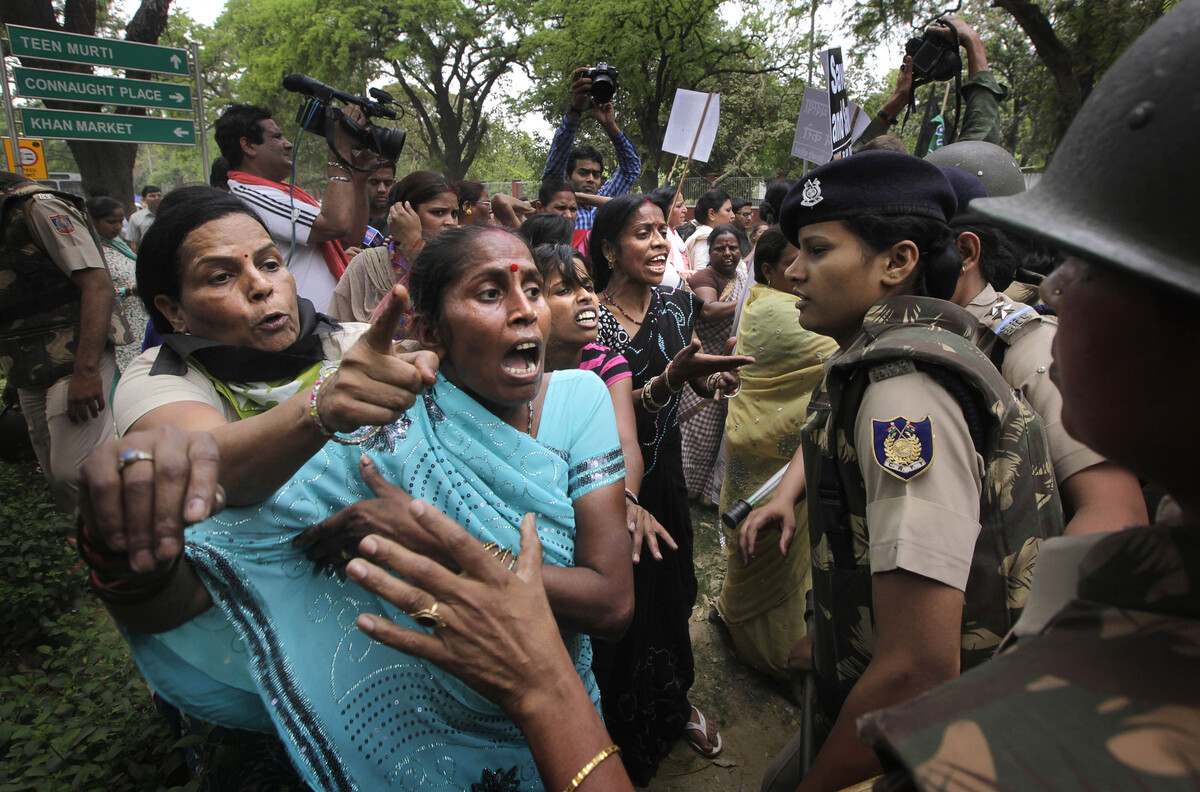 For a second straight day, protestors gathered outside the Delhi police headquarters demanding that Police Chief Neeraj Kumar resign. They also ridiculed the government of Congress Party leader Sonia Gandhi for not improving the epidemic of sexual violence in the capital. Scores of women from the opposition BJP Party broke through barricades at Gandhi's home on Sunday and were detained.

Sensing the public mood, the government has moved quickly to try to assuage anger. Gandhi visited the young victim at the hospital. "Action and not words are required to ensure that such incidents never happen again," she said.

The Asian Age newspaper opined Sunday that the society had to "interrogate" itself. "It is not enough to take the authorities and the police to task," it said. "What's the point of getting worked up and passing new laws if police and society do not step in to check this malady, which demeans us as a people."

A Challenge For The Legal System

The case could prove to be the first test of a new sexual assault law enacted in the aftermath of the December gang-rape. It includes jail terms for police who refuse to register rape cases. In this instance, it is alleged that police offered the family the equivalent of $40 to quietly drop the matter.

The new sexual assault legislation also provides for capital punishment in instances where the victim dies or is left in a vegetative state.

But incensed demonstrators are demanding the death penalty for the culprit in the rape of the 5-year-old girl.

This weekend, police apprehended a suspect in his early twenties, Manoj Kumar. He is alleged to have left the girl for dead in the room that he had rented and fled to his in-laws in Bihar, where he was captured. Police are seeking a second possible suspect after Kumar claimed that another man had helped him tie the girl down.

The suspect appeared in police custody, his head covered. Outraged citizens said his face ought to be shown, and that the suspect, who is reported to have been married last year, deserves neither anonymity nor mercy.

"Nothing has changed, and has probably become worse and more brutal," Nandini Rao of Citizen's Collective Against Sexual Violence told the Hindustan Times.

As the Delhi case draws headlines, a 4-year-old rape victim is reported to be in critical condition four days after being attacked in the state of Madhya Pradesh. Her alleged assailant, a man known to the girl's family, is said to have lured her with chocolate, sexually assaulted her, and dumped her at a farm.

The cases highlight a disturbing trend that increasingly places children — especially poor children — at the center of sexual violence in India, and at the mercy of predators.

The Asian Centre for Human Rights documents an increase of 336 percent of child rape cases from 2001 (2,113 cases) to 2011 (7,112 cases). Their report says, "These are just the tip of the iceberg as the large majority of child rape cases are not reported to the police."