Accessibility links
Apple Beats Wall Street Expectations : The Two-Way Investors have cooled on the once high-flying tech leader, and its share price has plummeted in recent months.

The just-launched Samsung Galaxy S4 smartphone is the latest competition for Apple's iPhone 5.

Reuters reports that Apple has posted better-than-expected second-quarter earnings of $43.6 billion, "reflecting strong sales of the iPad and iPhone." Wall Street had forecast revenue of $42.3 billion, the wire service says. 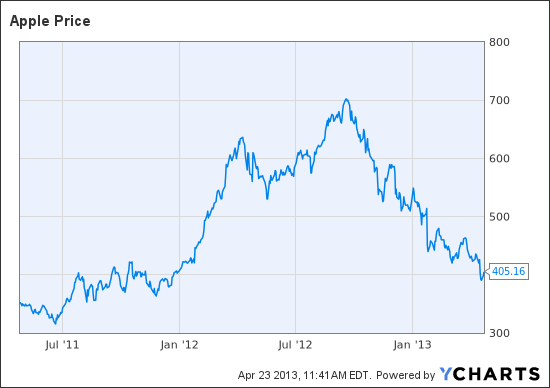 Investors are waiting, many not so eagerly, for a look at how Apple for the second quarter.

It's been a while since anyone's talked about the Cupertino, Calif.-based tech leader's stock price hitting $1,000. Instead, Apple shares have dropped 44 percent since September amid, as Mashable writes, "software blunders, supply constraint rumors, executive shakeups, increasing competition from Samsung and Google, and a growing concern that it might not have another breakthrough product in the pipeline."

Expectations for Apple's second-quarter earnings — and, more importantly, any hint of an outlook — are mixed but mostly lower. Here's a sampling:

"Not only is Apple expected to post an earnings decline for the first time in a decade, but some analysts believe the company will lower its outlook for the current quarter as growth in sales of iPhones and iPads slows in the face of stronger competition and a market that's less enchanted by its latest offerings.

"Even hopes that the cash-rich company will soon announce an increase in its dividend or stock buyback programs aren't expected to send the stock soaring the way it did last year. The one thing the company could do Tuesday that might change investors' sentiment is to answer the question that it never will: What's next?"

"Unlike in prior quarters, there is not a high probability scenario that can be laid out with any degree of confidence ahead of earnings."

"Conventional wisdom has it that Apple has reached its peak and can only disappoint from now on. ... While Apple is certainly not doomed, its future looks gloomy. That's why today's earnings will be important for the company."

"I think it comes down to the fact that Apple created and captured a once-in-a-lifetime opportunity with the iPhone.

"And, the era of explosive iPhone growth has drawn to a close, at least at the current iPhone price points.

"Apple will continue to grow earnings and profits nicely. The company will remain robustly healthy. But the mind boggling days of 125 percent EPS growth and 82 percent revenue growth are over."