Accessibility links
Armstrong 'Unjustly Enriched' Self, Justice Department Says : The Two-Way The department filed a lawsuit Tuesday against the disgraced cyclist who earned millions through his sponsorship with the U.S. Postal Service. According to The Associated Press, Armstrong's attorney called the government's complaint "opportunistic and insincere." 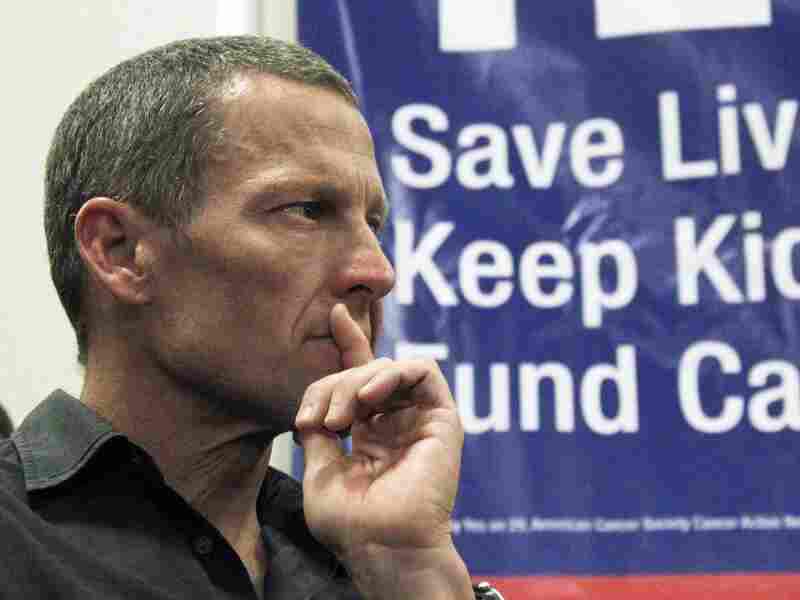 In a lawsuit filed against Lance Armstrong on Tuesday, the Justice Department said the disgraced Tour de France winner "unjustly enriched" himself through his contract with the U.S. Postal Service. Reed Saxon/AP hide caption

Disgraced Tour de France winner Lance Armstrong "unjustly enriched" himself through his contract with the U.S. Postal Service, the Justice Department said in a lawsuit filed against the cyclist Tuesday.

As NPR's Carrie Johnson reported in February, the department joined a civil lawsuit against Armstrong, "his Tailwind Sports team and its longtime manager, alleging their pervasive doping campaign defrauded the U.S. Postal Service out of more than $31 million in sponsorship fees." Carrie said at the time:

"The Justice Department says it will detail its allegations against Tailwind, Armstrong and longtime team manager Johan Bruyneel within 60 days. Authorities are joining a case filed in 2010 by Floyd Landis, who rode with the Postal Service-sponsored team. The case was filed under the federal False Claims Act, a Civil War-era law that allows whistle-blowers to sue when the government is defrauded and to collect a portion of any winnings."

"Defendants were unjustly enriched to the extent of the payments and other benefits they received from the USPS, either directly or indirectly," the complaint said, according to The Associated Press on Tuesday.

From 1998 to 2004, the Postal Service was the main sponsor of Armstrong's teams for six of his seven victories in the Tour de France. It paid about $40 million for that right. Armstrong received $17 million during that period.

In an interview with Oprah Winfrey in January, Armstrong admitted using banned substances, but anti-doping officials say he didn't come clean about how recently he had stopped the practice.