Accessibility links
Redesigned $100 Bill To Go Into Circulation After Long Delay : The Two-Way The new note, delayed for three years because of printing problems, will include a new 3-D security stripe and a color-shifting image of the Liberty Bell.

Redesigned $100 Bill To Go Into Circulation After Long Delay

Redesigned $100 Bill To Go Into Circulation After Long Delay 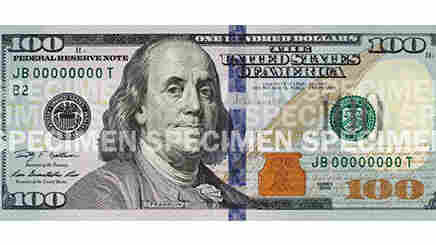 The redesigned U.S. $100 bill will begin appearing after October with new security features that will make it "easier for the public to authenticate but more difficult for counterfeiters to replicate," the U.S. Federal Reserve said Wednesday.

The improved note was first unveiled in 2010 but delayed due to "an unexpected production" problem that The Washington Post described three years ago as an issue stemming "from what officials called a 'problem with sporadic creasing of the paper during printing' that resulted in blanks spots on some of the newly redesigned bills."

The new note still sports a portrait of Ben Franklin, but unlike the current $100 bill, it will also include a 3-D security stripe and a color-shifting image of the Liberty Bell.

"We've also retained some security features that have proven to be effective in previous designs, such as a portrait watermark and the embedded security thread," says Michael Lambert, deputy associate director at the Board of Governors of the Federal Reserve System.

Gizmodo has a breakdown of the new security measures here.