Accessibility links
Hagel: Claims Syria Used Chemical Weapons Are 'Suspicions' : The Two-Way The defense secretary said the U.S. has to be "very careful" before drawing conclusions about Syria. The U.S. has said the use of chemical weapons is a "red line" in the conflict. 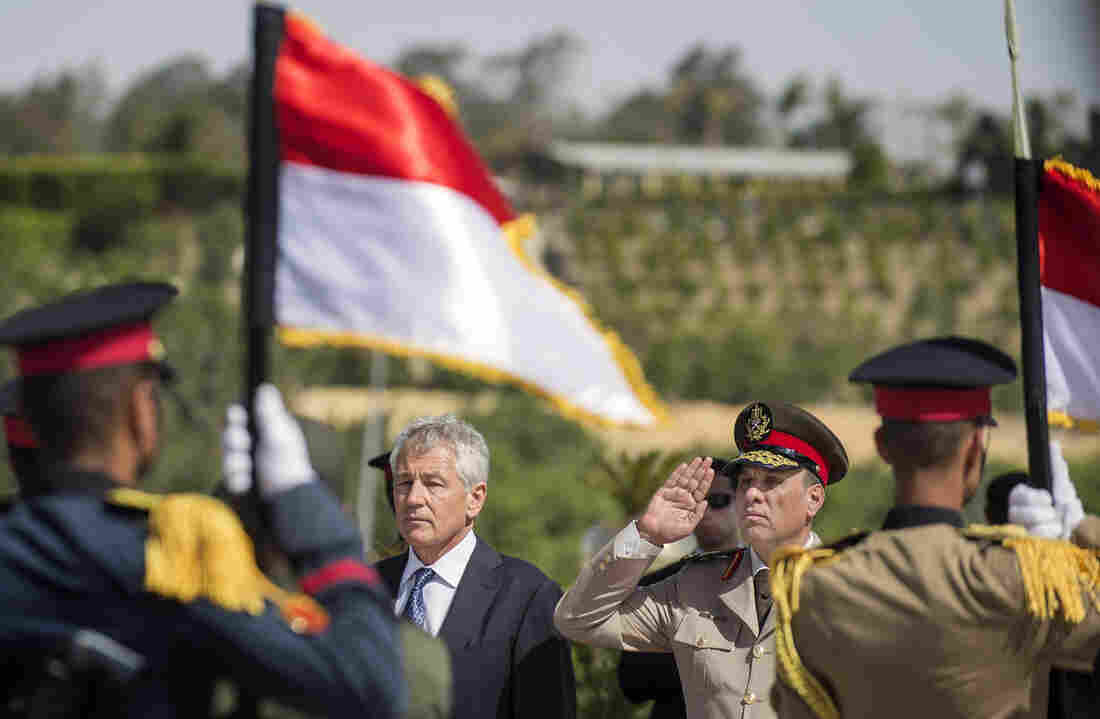 U.S. Secretary of Defense Chuck Hagel stands with an Egyptian army official as he salutes before laying a wreath at the Tomb of the Unknown Soldier on Wednesday in Cairo, Egypt. Pool/Getty Images hide caption

Defense Secretary Chuck Hagel on Wednesday tried to tone down Israeli claims that the Syrian government has been using chemical weapons.

Chemical weapons use is important, because the United Staes has repeatedly said their use marks a "red line" in the conflict. President Obama and the United Nations have warned President Bashar Assad not to use them.

"'Suspicions are one thing, evidence is another,' Hagel said in Cairo, his latest stop in a weeklong Mideast swing. 'I think we have to be very careful here before we draw any conclusions based on real intelligence.'

"Hagel stressed that he wasn't questioning the Israeli assessment, which came in a speech Tuesday by Brig. Gen. Itai Brun, Israel's top military intelligence analyst. Brun said the findings were based on reports that victims of the attacks in Aleppo and Damascus, Syria's largest cities, had constricted pupils and were foaming at the mouth."

USA Today has a bit more on what Hagel said:

"Israeli officials did not tell Hagel about their finding of chemical-weapon use when he met with officials there earlier this week, Hagel said.

"They did speak in more general terms about Syria's chemical weapons, Hagel said. A key concern is that terrorists might obtain them.

"Hagel would not offer a timeline for completion of the U.S. assessment."