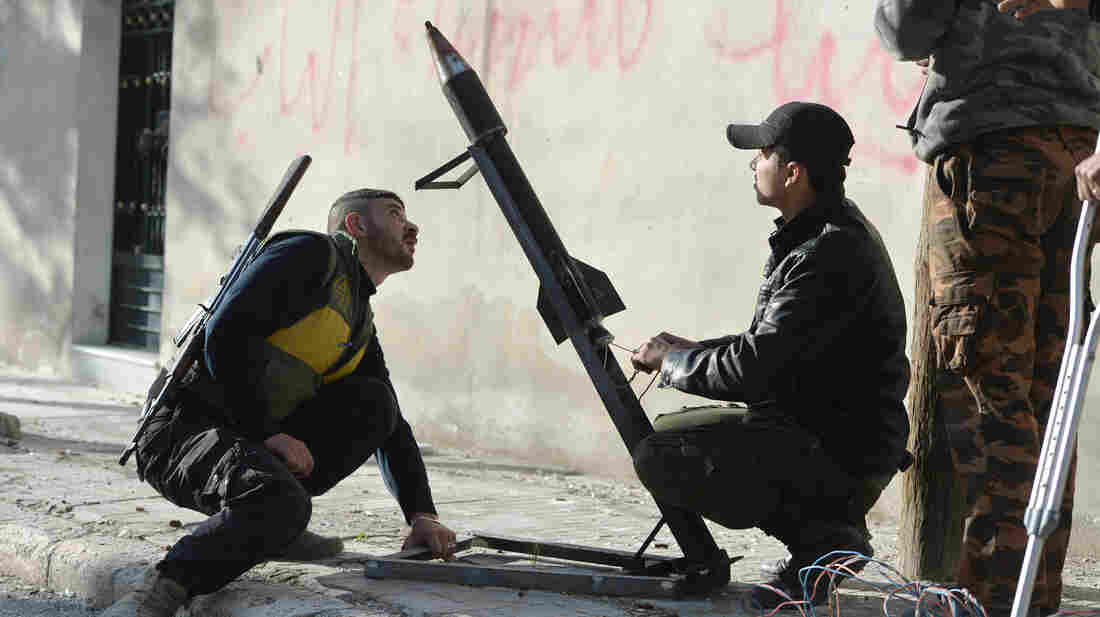 The White House said this week that it believes Syria has been using chemical weapons, but President Obama has not said how the U.S. might respond. Here, rebel fighters in Syria prepare to launch of a rocket in the northern Syrian city of Aleppo, on April 21. The rebels have also accused the Syrian government of employing chemical weapons. Miguel Medina /AFP/Getty Images hide caption

The U.S. has remained at arm's length during two years of bloodletting in Syria that has claimed some 70,000 lives. But when the White House said Thursday it believed Syria has used chemical weapons, even in small quantities, it immediately set off a renewed debate on whether the U.S. might pursue a more aggressive policy.

Here are some of the key issues now under discussion:

-- Is the U.S. sure that Syria used chemical weapons?

No, it's still checking. The White House does believe a chemical weapon was used but more research is needed. As Defense Secretary Chuck Hagel said Thursday, "We still have some uncertainties about what was used, what kind of chemical was used, where it was used, who used it."

Bob Scales, a retired major general who commanded U.S. forces with large chemical weapons arsenals, said, "We're going to see a lot of bluster, a lot table pounding, and a of lot of saber-rattling. But let's be careful and get this right."

Hanging over the Syrian debate is the specter of Iraq and the inaccurate information concerning its weapons program leading up to the 2003 U.S. invasion.

Multiple reports in recent days have cited the possible use of chemical weapons around the Syrian cities of Damascus and Aleppo last month and an earlier one in Homs. Victims reportedly suffered burns, blisters, breathing problems, severe irritation to the eyes and even blindness.

Scales noted that sarin is designed to attack the central nervous system rather than the skin, adding that the reports suggest other possibilities, such as white phosphorus, a component in some artillery shells that is not a chemical weapon. It produces large clouds of smoke and can cause the types of injuries that have been reported, Scales added.

-- Why would Syria use chemical weapons?

Syria has been pounding the rebels – and civilians – with a large conventional force that includes aircraft, Scud missiles and heavy artillery. The Assad regime has been able to use these weapons without provoking an international intervention.

Using chemical weapons would increase the likelihood of international intervention without offering Assad and his forces a significant advantage over the weapons already in use, many analysts note.

U.S. Wary As Qatar Ramps Up Support Of Syrian Rebels

The United Nations announced last month that it was sending a team to Syria to investigate the possible use of chemical weapons, but that effort has effectively been blocked by Syria.

-- What's the likelihood the U.S. will pursue a military option?

Sen. John McCain, the Republican from Arizona, has been a leading advocate of a robust American role in Syria.

The White House letter on Thursday was addressed to McCain, and the senator responded by saying the U.S. should "provide a safe area for the opposition to operate, establish a no-fly zone, and provide weapons to the people in the resistance who we trust."

Obama said last month that the Syrian use of chemical weapons would be a "red line." He has not hinted at what a U.S. response might be should Syria cross that line, but has consistently shown a reluctance to be drawn into Syria.

"I think it's been very clear, over the course of more than two years, that the president has no real interest in launching a major military intervention in Syria," Susan Glasser, editor in chief of Foreign Policy Magazine, told NPR's All Things Considered. "He doesn't seem to have a playbook ready in hand, for what to do in the case of something like a sarin-like gas being employed."

-- What are the non-military options?

The U.S. and European countries are providing humanitarian and other non-lethal assistance to the rebels. Turkey, Lebanon and Jordan have taken in large numbers of Syrian refugees. The opposition already controls many towns and swathes of territory in northern Syria, near the Turkish border.

The U.S. recently stepped up assistance, but no one sees this as having a major impact on the broader civil war.

One notion frequently floated is to declare safe havens in northern Syria. The idea would be to establish a zone where Syrian civilians would feel safe, and in turn, slow the exodus of refugees to neighboring countries. But even this option would likely require outside troops to enforce it, and no country has shown a willingness to step forward.

-- What's the current trajectory of the civil war?

The rebels have been making gains over time at the expense of the Assad regime. But the Syrian army still appears to be a formidable force and the conventional wisdom is that Assad's regime is not in imminent danger of collapse.

On the rebel side, Islamist fighters have been playing an increasingly prominent role in the fighting with the help of arms supplied by Saudi Arabia and other countries in the Persian Gulf. This has raised the prospect that if Assad is ousted, Syria could be controlled by radical Islamists.

"This is a really big debate ... how do you influence a rapidly deteriorating situation if you don't deal with the reality of the fact that those who are taking the shots against Assad will be calling them when he's gone?" Andrew Tabler, a Syria analyst at the Wasington Institute for Near East Policy, told NPR.