Accessibility links
NBA's Jason Collins Is First Active Player To Come Out As Gay : The Two-Way A veteran of 12 seasons in the league, the basketball player says he's going public now because he's confronted "who I really am and what I really want." While some players from major team sports have come out after retiring, he's the first to do so while still planning to play. 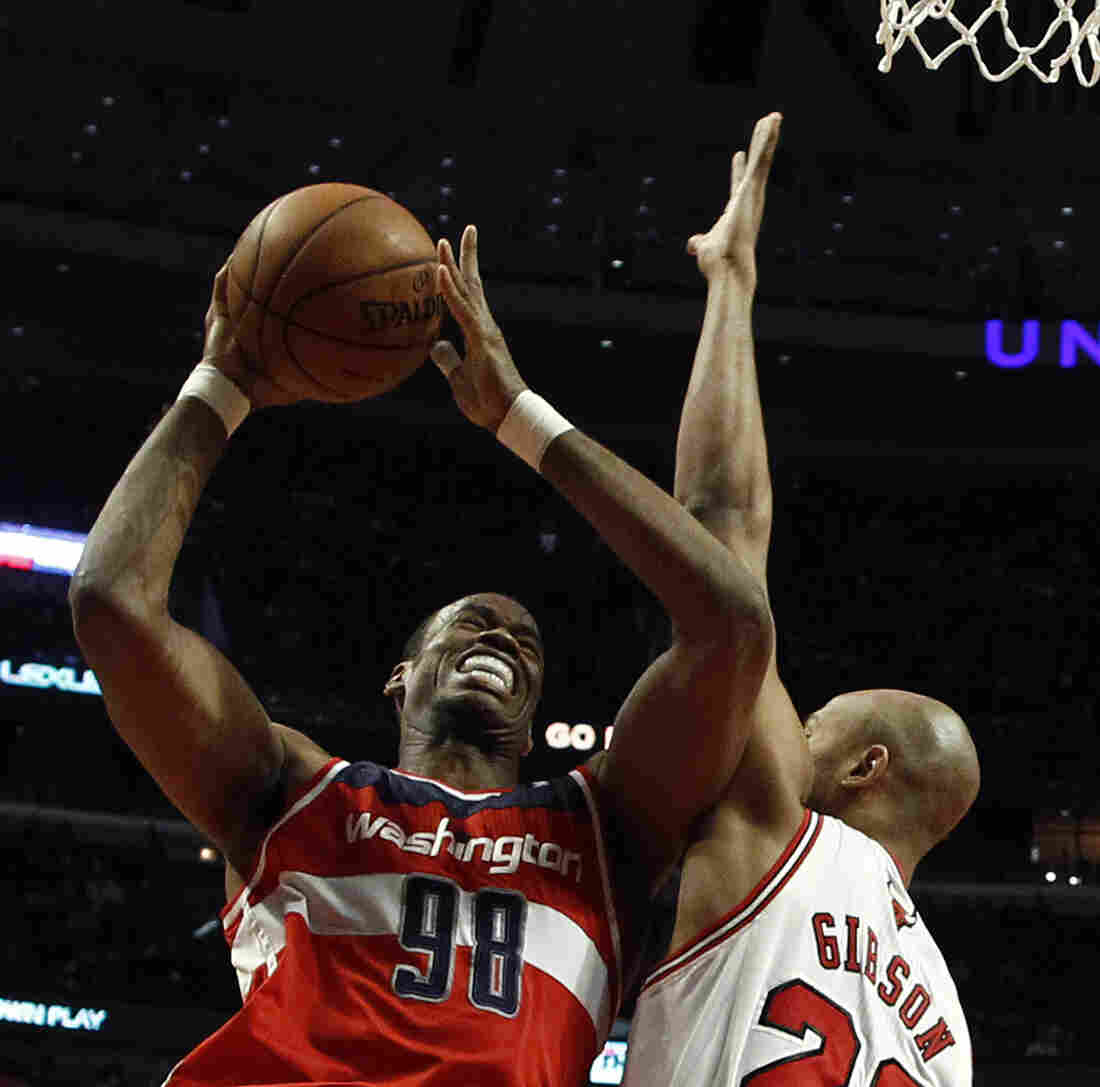 Jason Collins (left), then of the Washington Wizards, during a game this month against the Chicago Bulls. Jim Young /Reuters /Landov hide caption 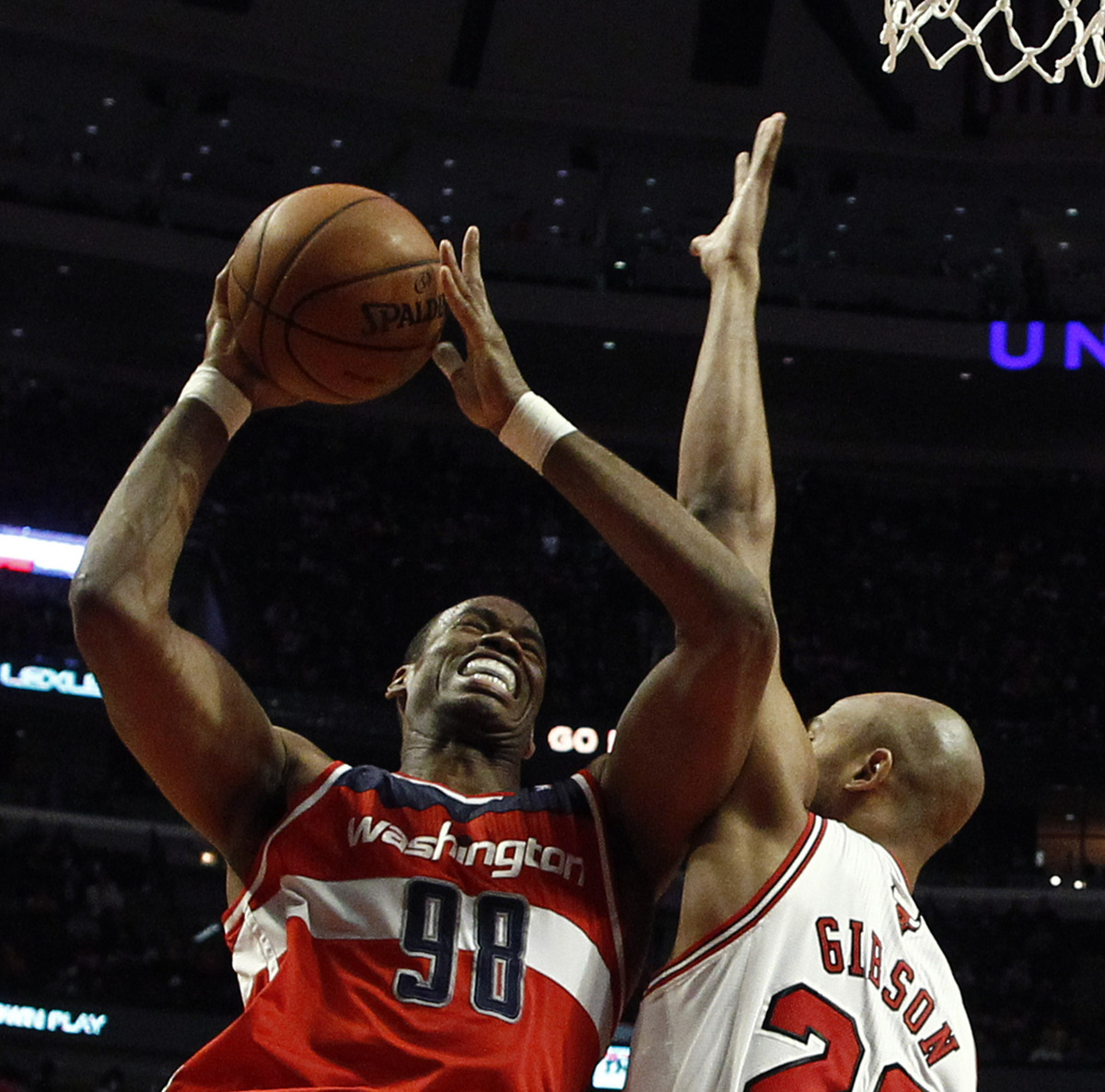 Jason Collins (left), then of the Washington Wizards, during a game this month against the Chicago Bulls.

"I didn't set out to be the first openly gay athlete playing in a major American team sport," National Basketball Association center Jason Collins writes in a Sports Illustrated essay posted Monday, "but since I am, I'm happy to start the conversation."

With that, the 34-year-old veteran of 12 NBA seasons and six pro teams becomes the first active player in the four major American team sports to come out.

Why now? Collins writes that:

"Well, I started thinking about this in 2011 during the NBA player lockout. I'm a creature of routine. When the regular season ends I immediately dedicate myself to getting game ready for the opener of the next campaign in the fall. But the lockout wreaked havoc on my habits and forced me to confront who I really am and what I really want. With the season delayed, I trained and worked out. But I lacked the distraction that basketball had always provided. ...

"I realized I needed to go public when Joe Kennedy, my old roommate at Stanford and now a Massachusetts congressman, told me he had just marched in Boston's 2012 Gay Pride Parade. I'm seldom jealous of others, but hearing what Joe had done filled me with envy. I was proud of him for participating but angry that as a closeted gay man I couldn't even cheer my straight friend on as a spectator."

He goes on to say he's been asked how he thinks other players will respond to the news. "The simple answer is, I have no idea," Collins writes. "I'm a pragmatist. I hope for the best, but plan for the worst. The biggest concern seems to be that gay players will behave unprofessionally in the locker room. Believe me, I've taken plenty of showers in 12 seasons. My behavior wasn't an issue before, and it won't be one now. My conduct won't change. I still abide by the adage, 'What happens in the locker room stays in the locker room.' I'm still a model of discretion."

Now a free agent, Collins played this past season for the Boston Celtics and Washington Wizards. Over his 713-game NBA career, he has averaged just under 21 minutes a game and has scored an average 3.6 points per game. Collins is 7 feet tall and weighs 260 pounds.

His twin brother, Jarron, who Jason Collins writes is straight, played in the NBA for 10 seasons — most recently in 2010-11 for Los Angeles (the Clippers) and Portland.

As Talk of the Nation, The New York Times, USA Today and other news outlets have reported, the NBA, Major League Baseball, National Hockey League and National Football League have been expecting that some gay players would soon open up about their sexuality. Over the years, starting with former NFL player Dave Kopay in 1975, some retired players have gone public. As the public's attitude toward homosexuality and such issues as same-sex marriage have changed in recent years, though, the expectation grew that active athletes would feel comfortable about coming out.

Golden State Warriors president Rick Welts, who himself came out in 2011, has called Collins' decision "very, very courageous." NPR's Tom Goldman has more on his remarks and how Collins' announcement helped Welts avoid a traffic ticket.

Update at 1:55 p.m. ET. Odds Were Slightly In Favor Of Him Playing Again:

Statistics guru Nate Silver of The New York Times' FiveThirtyEight.com has crunched the numbers and concluded that for a player of Collins' age, experience, size and track record the odds are "slightly in favor" of his being picked up by an NBA team to play again next season. It's a "pretty close call," Silver adds — which means that if Collins isn't signed by any team there will be those who make the case he's being discriminated against; and if he is signed by a team there will be those who make the case that it's a publicity stunt. "Here's hoping that the league will evaluate Mr. Collins on the basis of his basketball production and skills, and not his sexuality," Silver writes.

-- Lakers star Kobe Bryant: "Proud of @jasoncollins34. Don't suffocate who u r because of the ignorance of others #courage #support #mambaarmystandup #BYOU."