Accessibility links
Cry For Help Led To Freedom For Missing Women In Cleveland : The Two-Way Neighbors heard a woman desperately shouting for help from inside a home. After a man helped her get out, authorities discovered that Amanda Berry and two other young women who had been missing for between 9 and 11 years had been inside the house. Three men have been arrested. 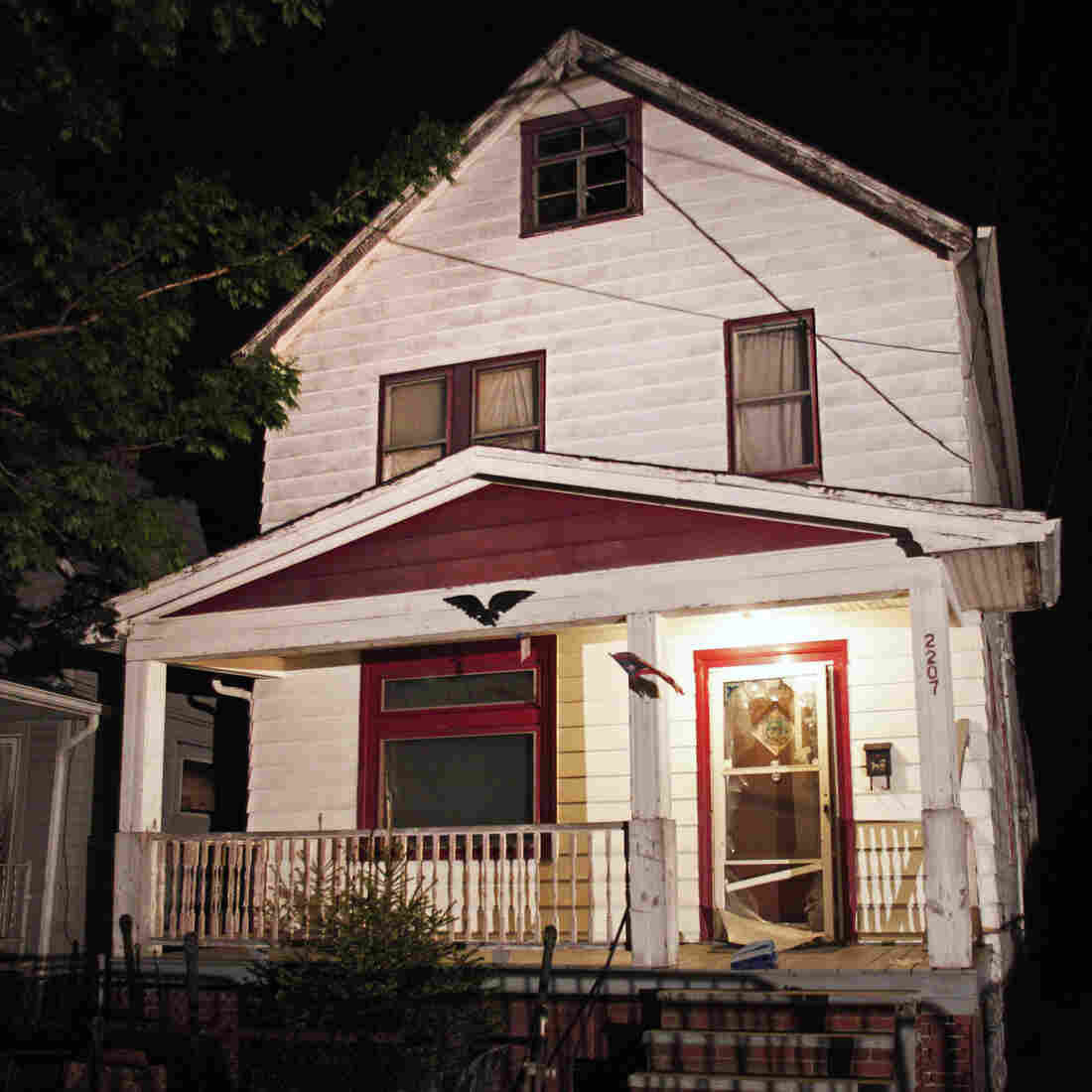 The Cleveland home where three young women who had been missing for nine to 11 years were found Monday. Bill Pugliano/Getty Images hide caption 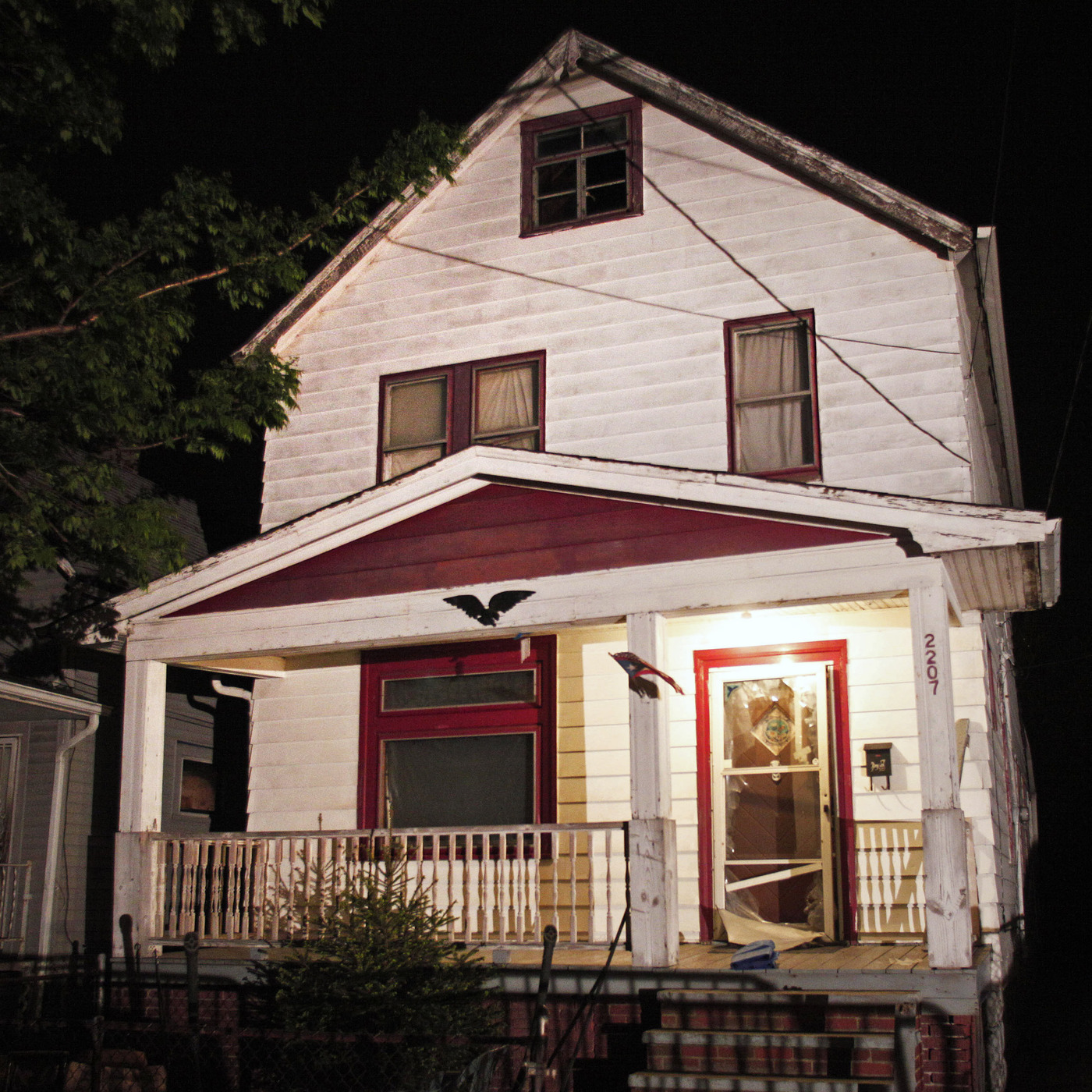 The Cleveland home where three young women who had been missing for nine to 11 years were found Monday.

As we reported last evening, three young women who had gone missing between 2002 and 2004 were found Monday afternoon inside a home where the shades were said to be always drawn. No one who lives nearby seems to have suspected that there might be kidnapping victims inside.

— Three young women, Amanda Berry (27), Gina DeJesus (23) and Michelle Knight (32) were found Monday evening at a home in Cleveland after Berry's frantic cries for help brought a neighbor to the door. With them was a 6-year-old girl who police say is Berry's daughter.

— The three women, all from the Cleveland area, had been missing for many years — Knight since 2002, Berry since 2003 and DeJesus since 2004. They have all been treated and released at a Cleveland-area hospital.

— Three brothers have been arrested, but not yet charged, in relation to the women's disappearances. They are: 52-year-old Ariel Castro, 54-year-old Pedro Castro and 50-year-old Onil Castro.

— As of midday Tuesday, authorities had not released any details about what they found inside the home or exactly what they've learned from the three women.

The women are Amanda Berry (27), Gina DeJesus (23) and Michelle Knight (32), whose disappearances generated much attention in local media over the past decade. Three brothers in their 50s have been arrested.

According to The Associated Press: "Berry disappeared at age 16 on April 21, 2003, when she called her sister to say she was getting a ride home from her job at a Burger King. About a year later, DeJesus vanished at age 14 on her way home from school. Police said Knight disappeared in 2002 and is 32 now." They are being treated at a Cleveland area hospital, where they're reported to be in fair condition.

As Tuesday dawns, we're learning more about how the women were discovered and what neighbors say about the man who they would see coming and going from the home.

On Morning Edition, WCPN's Bill Rice played a clip from a frantic 911 call Berry made after her escape. "Help me, I'm Amanda Berry. ... I've been kidnapped and been missing for 10 years. I am here, I'm free now," she says. (A transcript of her call is posted here.)

Rice also reported on neighbor Charles Ramsey's account of Berry's cries for help from inside the house.

"I heard screaming," Ramsey said. "I come outside I see this girl going nuts trying to get out of the house. So I go on the porch and she says help me get out. I've been in here a long time."

Ramsey says Berry was pushing her hand out of part of a door as she yelled. According to the Cleveland Plain Dealer, "Ramsey said Castro took off running while Ramsey kicked and broke the bottom of a door, allowing Berry to crawl out. Police arrested Castro at a nearby McDonald's restaurant and brought the other two women out of the house, witnesses said."

A young child also emerged from the home, according to local news reports.

As for Aerial Castro, the man who lived in the home, the Plain Dealer writes that "Mike Iwais, a longtime resident in the neighborhood, lives in a house just a parking lot away — about 200 feet — from Castro's house. 'I used to see him walking around all the time,' he said. 'But I never saw nothing crazy. This is unbelievable. It's a miracle they found him, and it's a miracle those girls are alive. It's a blessing from God.' "

On Morning Edition, WCPN's Rice reported that other neighbors "say Castro would park his red pickup truck behind his house, lock the gate and enter though a back door. The house was often dark, with shades blocking the windows." Rice also reported that:

"Rescuer Charles Ramsey says he never saw Castro do anything suspicious. 'He just comes out to his backyard, plays with the dogs, tinkers with his cars and with his motorcycles, and goes back in the house,' Ramsey said. "So he's just somebody who you look, and then look away, because he's not doing' nothin' but the average stuff.' "

We'll be monitoring and plan to update as this story develops.

The three suspects — 52-year-old Ariel Castro, 54-year-old Pedro Castro and 50-year-old Onil Castro — are in custody and expected to be charged within the next 36 hours. (Note at 6:15 a.m. ET, May 7: After initial confusion about the spelling of Onil Castro's first name, authorities have now settled on Onil. We've updated to reflect that.)

"Department officials say their records show there were never any calls for service to Ariel Castro's home on Seymour Avenue, the location where the three women were rescued Monday evening. Police say Ariel worked as a Cleveland Schools bus driver, and was questioned once in connection with a child left on the bus, but no charges were ever filed in relation to the incident.

"Meanwhile, police say the three women appear to be in OK condition and were released from Metro Health Hospital earlier this morning."

CNN just spoke with Julio Castro, an uncle of the three men suspected of holding the young women against their will. The family's reaction to this news is a "surprise," Julio Castro said. He never had any reason to think that three young women (and a child) might be held captive in his nephew Ariel's home, Julio Castro said, and had not seen Ariel in recent years. As for how he thinks others will react to his news about members of his family, Julio said he trusts people will realize there's "a bad one in every family."

Update at 9:25 a.m. ET. Suspects Named, Child Is Thought To Be Berry's Daughter:

At a news conference now underway in Cleveland, Police Chief Michael McGrath identified the three brothers who are under arrest as Ariel Castro, 52, Pedro Castro, 54, and O'Neill (spelling not confirmed), 50.

Authorities also said that they believe the 6-year-old girl found at the home is Amanda Berry's daughter. They would not comment on the father's identity.

Update at 9:04 a.m. ET. VIDEO: Charles Ramsey talks about helping Amanda Berry and about the man who lived in the house.