Accessibility links
Cleveland Kidnappings: Wednesday's Developments : The Two-Way As investigators piece together what happened to three young women who appear to have been held captive for about a decade, the residents of the Cleveland neighborhood where they were found are in shock.

From 'Morning Edition': A Neighborhood In Shock 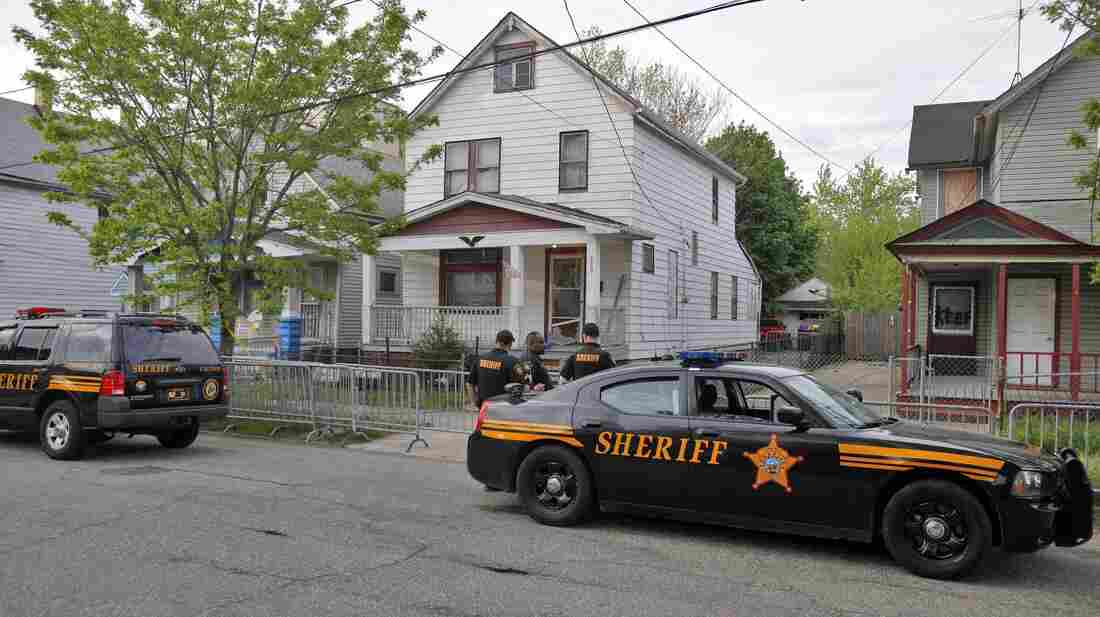 What happened here? The home on Seymour Avenue in Cleveland where three young women who had been missing for about a decade, as well as a child, were rescued on Monday. David Maxwell /EPA /LANDOV hide caption 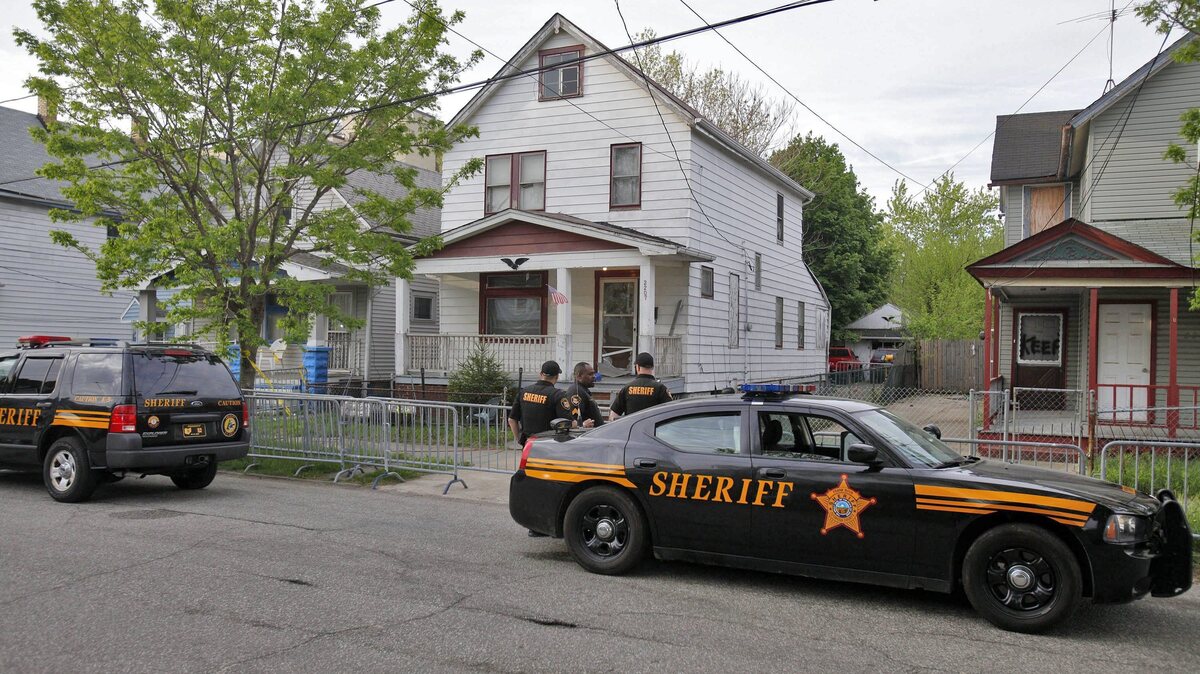 What happened here? The home on Seymour Avenue in Cleveland where three young women who had been missing for about a decade, as well as a child, were rescued on Monday.

We're following the latest news about the three young women who were rescued Monday from a home in Cleveland where authorities suspect they had been held captive for about a decade, and the investigation into what happened to them.

At a news conference Wednesday afternoon, Victor Perez, the chief assistant prosecutor for the City of Cleveland announced that suspect Ariel Castro would be charged with four counts of kidnapping and three counts of rape. His arraignment was expected on Thursday.

Perez said that there was "no evidence" that Ariel's brothers, Pedro and Onil, were involved and no plans to charge them.

Police also said that the child found at the residence along with Amanda Berry, Gina DeJesus and Michelle Knight was Berry's daughter.

Booking photos of the three brothers now in custody after the discovery of three young women who may have been held captive in a Cleveland home for about a decade. From left to right: Ariel Castro, Onil Castro and Pedro J. Castro. Cleveland Department of Public Safety/EPA /LANDOV hide caption

Booking photos of the three brothers now in custody after the discovery of three young women who may have been held captive in a Cleveland home for about a decade. From left to right: Ariel Castro, Onil Castro and Pedro J. Castro.

The rape charges relate to Berry, DeJesus and Knight and the additional count of kidnapping refers to Berry's daughter, police said.

A cheering crowd, many carrying balloons, welcomed Gina DeJesus home for the first time in nearly a decade. She emerged from a black SUV wearing a yellow hoodie that hid her face and was quickly escorted inside. She did not make a statement.

Victim Amanda Berry has arrived at her sister's home in Cleveland and authorities had thought she would speak to the news media gathered outside. Instead, however, her sister Beth Serrano just came out to thank reporters and say "our family would request privacy [for] my sister and niece and I."

"A thorough search of the scene at 2207 Seymour Avenue did not reveal human remains," Cleveland Safety Director Marty Flask said earlier today, according to Fox 8 Cleveland. That's the address of the home where Amanda Berry, Gina DeJesus and Michelle Knight were found.

Charles Ramsey has gotten a lot of attention for the interviews he's given about how he says he helped victim Amanda Berry get out of the house. Our Code Switch blog, which on Tuesday looked at the social media world's reaction to Ramsey's compelling interviews, today reports that another neighbor says he was there before Ramsey.

The young woman whose cries led to her release and freedom for her daughter and two other women is due to return to her sister's home in Cleveland shortly. Cameras are outside Amanda Berry's home and WKYC is streaming its coverage here. CNN is reporting that Berry may speak to reporters.

NBC News writes that "the three women held in a Cleveland house for a decade were bound with chains and ropes, and allowed only 'once in a while' into the backyard," according to Cleveland Police Chief Michael McGrath.

The chief also said he expects charges to be filed later today against the three brothers suspected of holding the young women against their will. Ariel, Pedro and Onil Castro were taken into custody Monday.

From Johnson City, Tenn., WJHL-TV has posted video in which you can hear Amanda Berry — one of the three women — speak to her grandmother for the first time in more than 10 years. During the conversation, Berry says the 6-year-old girl who was also found at the house in Cleveland is her daughter and was "born on Christmas Day."

-- "Cleveland Community Wonders How Abducted Women Were Held For So Long." On Morning Edition, WCPN's David Barnett reported from the neighborhood where Amanda Berry, Gina DeJesus and Michelle Knight were found (along with a 6-year-old girl who police say is Berry's daughter). Neighbors are shocked that the women may have been held against their will in a home there and many are wondering what they missed and what they might have done.

"I wish I could say I was ecstatic that they found the girls," said Juan Perez, one of the residents. "I'm happy that they're OK, but I felt a tug in my heart that I did not help, I did not know. Ten years? And I know I'm not the only one on the block that thinks like that. We're torn between happy and ashamed."

-- "Specially Trained FBI Agents Will Help Kidnapped Women Heal." Also on Morning Edition, NPR's Carrie Johnson reported that investigators and experts who deal with victims of such crimes say that right now the three women need privacy most of all. "Victims are resilient. People can come out of this and be healthy productive human beings afterward," says Mai Fernandez, executive director of the nonprofit National Center for Victims of Crime. "But we need to give them the time and the space to be able to do this."

-- "Focus Of Women's Disappearance Shifts Attention To Castro Brothers." Cleveland's Plain Dealer writes that "a day after authorities arrested Ariel, Onil and Pedro Castro in the kidnappings of Gina DeJesus, Michelle Knight and Amanda Berry, a troubling portrait is emerging of the men. The men, reared in a strict family, have been accused in one of the most heinous crimes in the city's history." Among the things being learned about the men:

"Court records indicate Ariel Castro fought with his former wife, Grimilda Figueroa, over the custody of their children. Figueroa twice suffered a broken nose, as well as broken ribs, a knocked-out tooth, a blood clot on the brain and two dislocated shoulders, according to a 2005 filing in Cuyahoga County Domestic Relations Court. In the filing, her attorney requested that a judge 'keep (Castro) from threatening to kill (Figueroa).' "

-- "Charges Expected Soon." The three brothers who have been arrested "may face charges including kidnapping and rape," WCPN reports. "Formal charges in the case have not yet been filed."

-- Are We Laughing With Charles Ramsey?

-- Neighbor In Cleveland: 'I Thought This Girl Was Dead!'