Accessibility links
Prosecutors May Seek Death Penalty For Cleveland Kidnapper : The Two-Way The three young women who authorities say were held captive inside a home for about a decade have given police similar accounts of what suspect Ariel Castro allegedly did to trick them into coming with him. 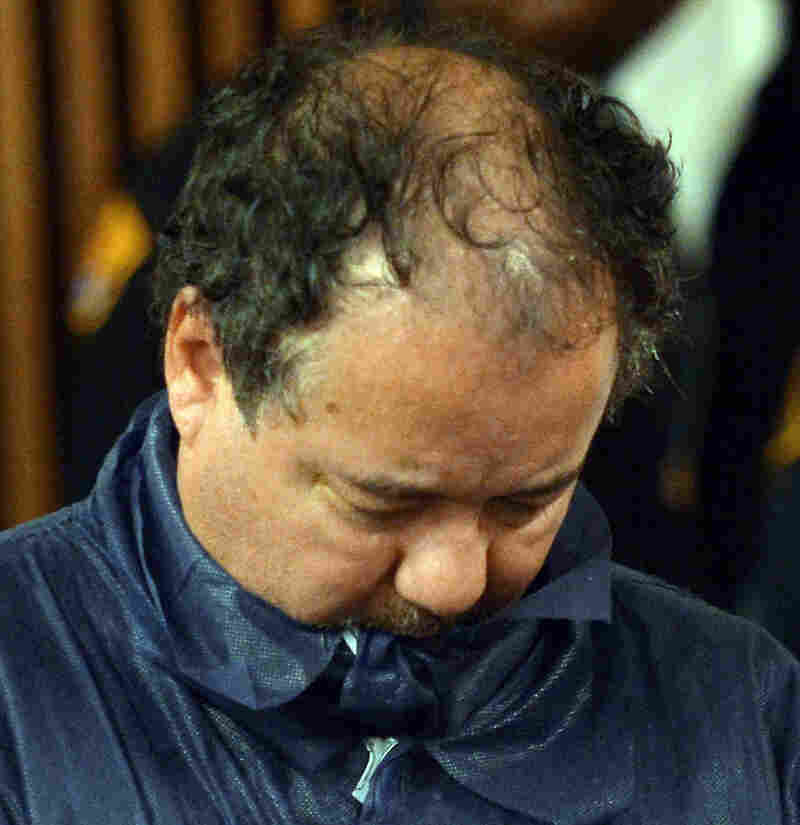 Ariel Castro during his arraignment Thursday at Cleveland Municipal Court. He's accused of kidnapping and raping three young women, and then holding a daughter born to one of those women captive. The women had been missing for about a decade. The child is now six years old. Emmanuel Dunand /AFP/Getty Images hide caption 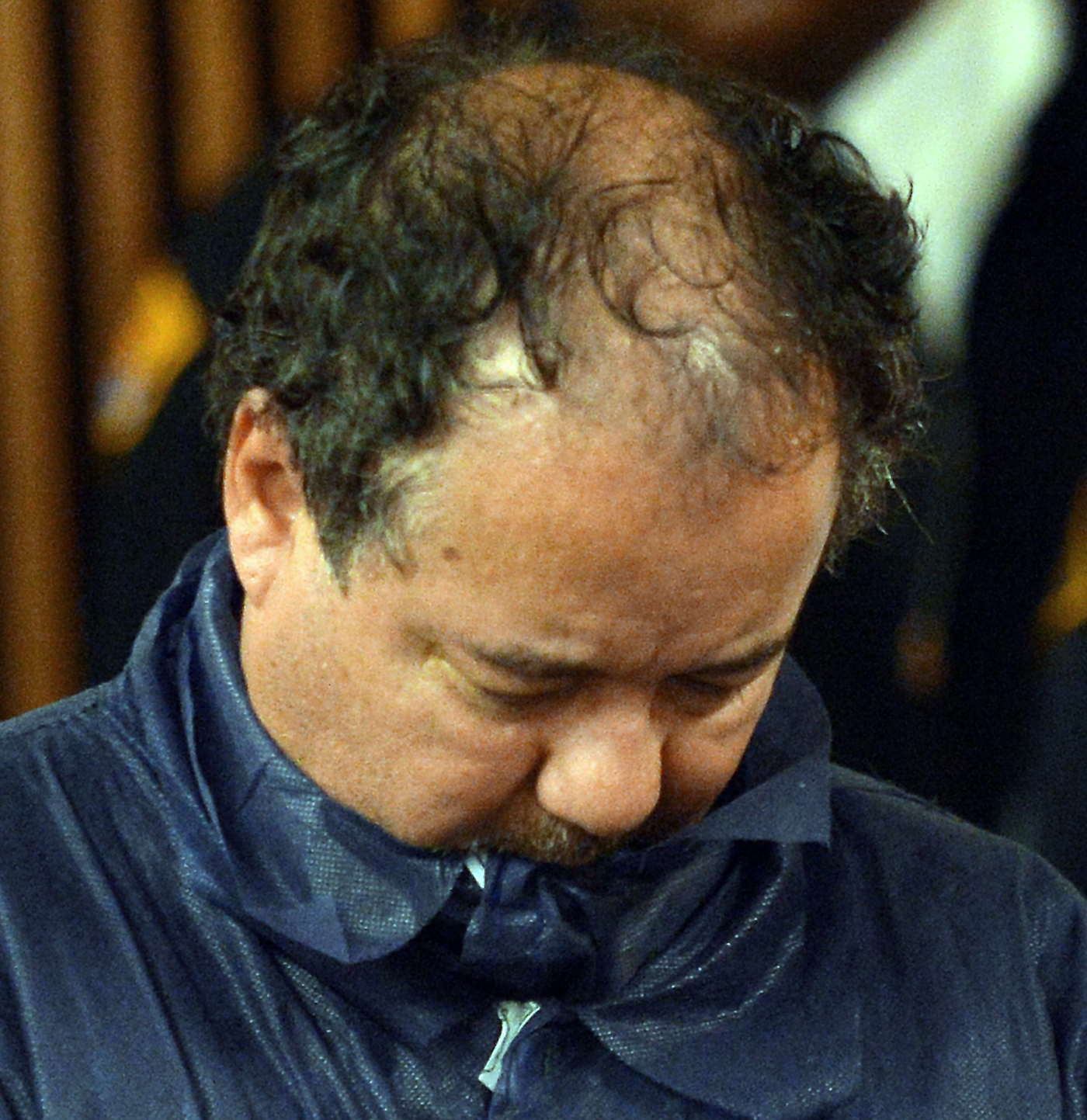 Ariel Castro during his arraignment Thursday at Cleveland Municipal Court. He's accused of kidnapping and raping three young women, and then holding a daughter born to one of those women captive. The women had been missing for about a decade. The child is now six years old.

The three young women who were missing for about a decade before being rescued Monday from a home in Cleveland where they say they were chained, tortured and sexually assaulted, have given police similar accounts about how their long nightmares began.

In a police report that NPR has been shown, Amanda Berry, Gina DeJesus and Michelle Knight are quoted as saying that suspect Ariel Castro's approach was simple. On Morning Edition, NPR's Cheryl Corley said it's alleged that:

"Nearly 10 years ago, [Castro] told then 14-year-old DeJesus he'd drop her off at his house so she could meet with his daughter. ... He lured Amanda Berry [in 2003] by telling her his son worked at the same restaurant she did. He offered Michelle Knight a ride home [in 2002]."

As Cheryl adds, all three — according to their accounts — "would end up chained in the basement of the house before living later on the second floor. They were allegedly forced to have sex with Castro. One victim told police she became pregnant several times but Castro punched her in the stomach so she would miscarry. Amanda Berry give birth to a daughter who is now six. Authorities will give the child a paternity test to confirm Castro is the father."

The women say they were almost never allowed outside. Martin Flask, Cleveland's public safety director, said Wednesday that "in the last decade, they've only known themselves to be outside of the home on two separate occasions, and that was only briefly."

Cleveland's Plain Dealer says the police report also states "that Berry's 6-year-old daughter was born in a small inflatable swimming pool during the time the three women were held in captivity, [a Cleveland police] source said. The initial report says Castro forced Knight to deliver Berry's baby. He threatened to kill Knight if the baby did not survive the birth, the source said."

As we reported Wednesday, prosecutors say Castro is being charged with four counts of kidnapping (one for each of the three women and another for Berry's daughter) and three counts of rape. Castro, 52, is due in court later today.

The suspect's brothers Pedro and Onil, who were taken into custody with him on Monday, will not face any criminal charges, as WCPN reports. According to the Plain Dealer, "Victor Perez, the chief assistant city prosecutor, said there was no evidence linking Onil and Pedro Castro to the [alleged] torture that took place at their brother's home."

Berry and DeJesus are now at relatives' homes in Cleveland. Knight remains in a hospital, where she's said to be in good condition.

We'll watch for more news and update as warranted.

The Associated Press reports that Cuyahoga County Prosecutor Timothy McGinty says his office will decide whether to bring aggravated murder charges against Castro for allegedly starving and punching one of his captive until she miscarried.

"Capital punishment must be reserved for those crimes that are truly the worst examples of human conduct," McGinty was quoted by the AP as saying. "The reality is we still have brutal criminals in our midst who have no respect for the rule of law or human life."

At a news conference Thursday afternoon, Cuyahoga Co. Prosecutor Timothy McGinty said it would take time for details of the investigation to come out because the victims "need a chance to heal" before authorities question them further.

"The victims in this case have gone through a traumatic, decade-long ordeal that few of us can comprehend," he said.

McGinty declined to answer any questions from the gathered media, but asked instead that reporters submit them by email.

"The mother of the three Castro brothers — including Ariel Castro, who today was officially accused of holding three women captive and being held on $8 million bond — tearfully apologized to reporters today on behalf of her son," the Plain Dealer writes. "I am a mother in a lot of pain," Lillian Rodriguez said to reporters. "I am sorry for what my son has done."

Ariel Castro, the 52-year-old former bus driver accused of holding three women captive in his home for about a decade, just stood silent and with his head bowed as Cleveland Municipal Court Judge Lauren C. Moore set his bond at $2 million per case against him. He's accused of kidnapping and raping the three women, and kidnapping the child that one of them bore while in captivity. It appeared Moore was saying the total for the bonds was $8 million, given that Castro is accused of crimes against four individuals.

Castro's brothers Onil and Pedro, who were taken into custody along with him on Monday, also appeared in court. Authorities have said they now do not think the brothers were involved in the alleged kidnappings, rapes and captivity. Both brothers had outstanding misdemeanor charges (for drinking in public from open containers), however, and were assessed small fines.

Ariel Castro's arraignment is about to get started. Cleveland's NewsNet5 is among the stations streaming the hearing.

-- Another Neighbor Of Rescued Cleveland Women Says He Helped

-- The Missing Women Were Seemingly In Plain Sight

Note: As happens when stories such as this are developing, there will likely be reports that turn out to be mistaken. We will focus on news being reported by NPR, other news outlets with expertise, and statements from authorities who are in a position to know what's going on. And if some of that information turns out to be wrong, we'll explain.