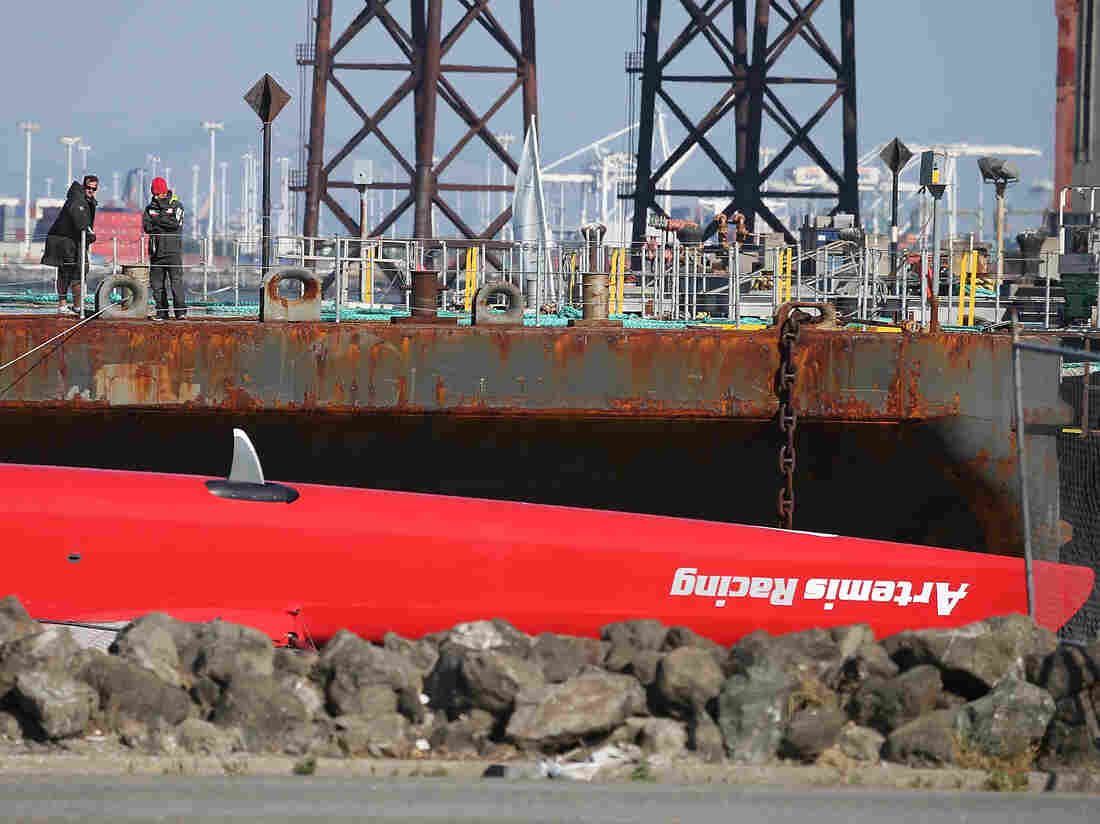 An upside-down hull of the Artemis Racing AC72 catamaran after being towed in to Treasure Island on Thursday. Justin Sullivan/Getty Images hide caption 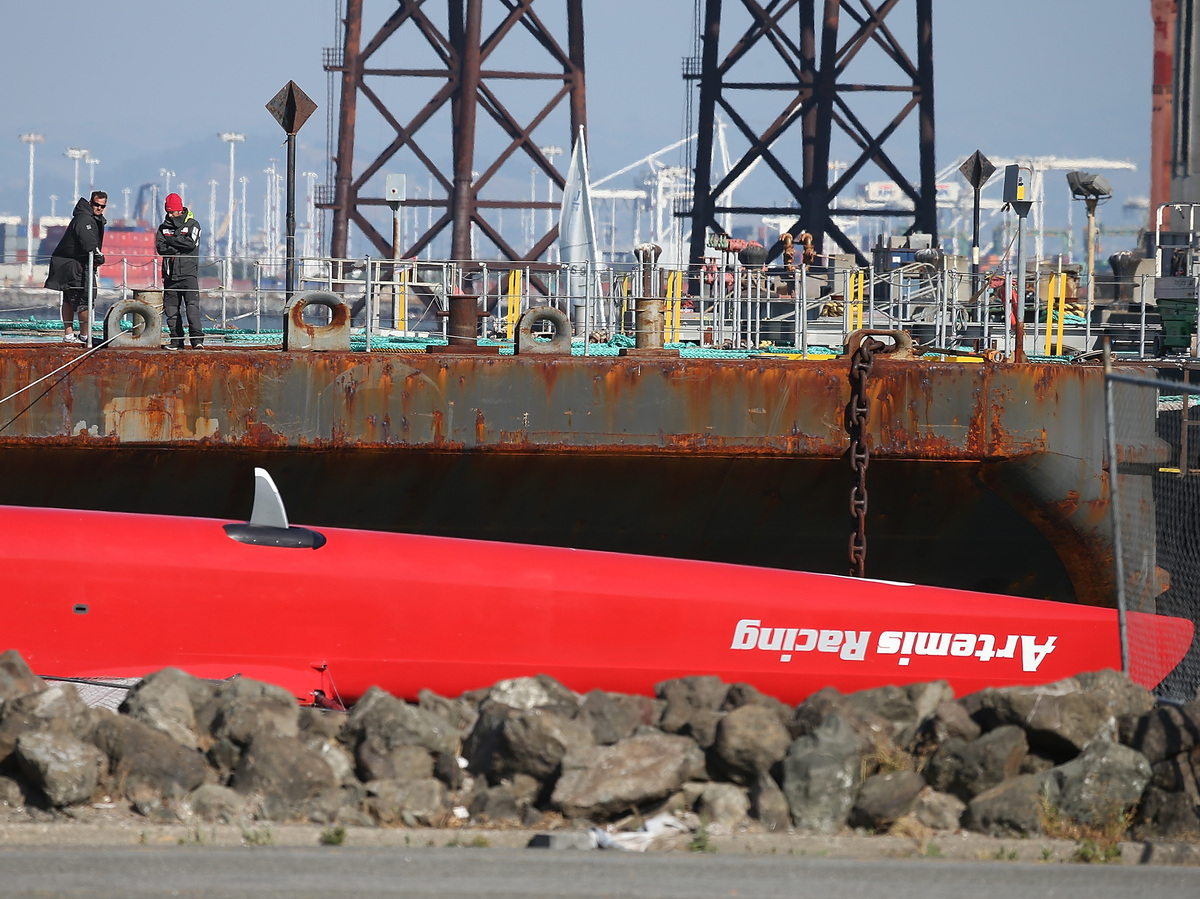 An upside-down hull of the Artemis Racing AC72 catamaran after being towed in to Treasure Island on Thursday.

Update at 7:15 p.m. ET: Sailor Was 'Trapped Underneath Boat'

On its website, Artemis Racing says Simpson, 36, "was trapped underneath the boat and despite attempts to revive him, by doctors afloat and subsequently ashore, his life was lost." Artemis says Simpson was part of an 11-member team aboard the boat and that all others have been accounted for. 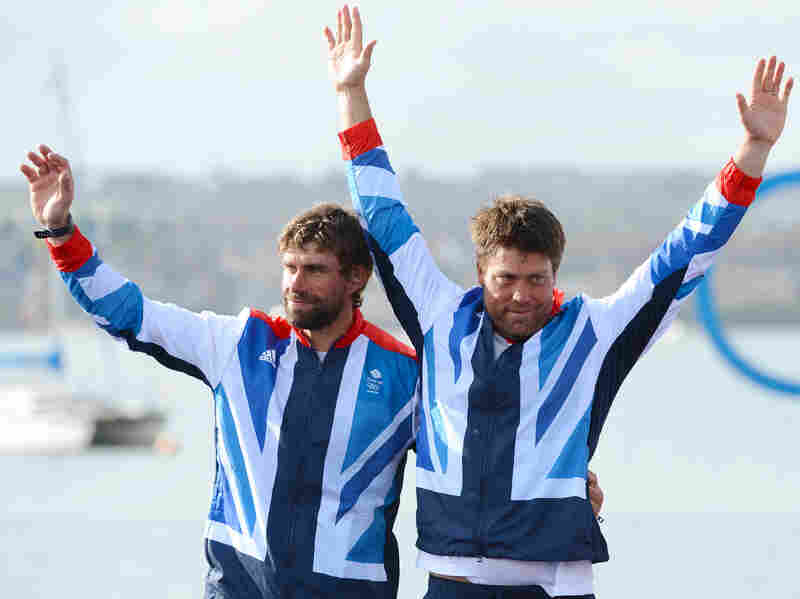 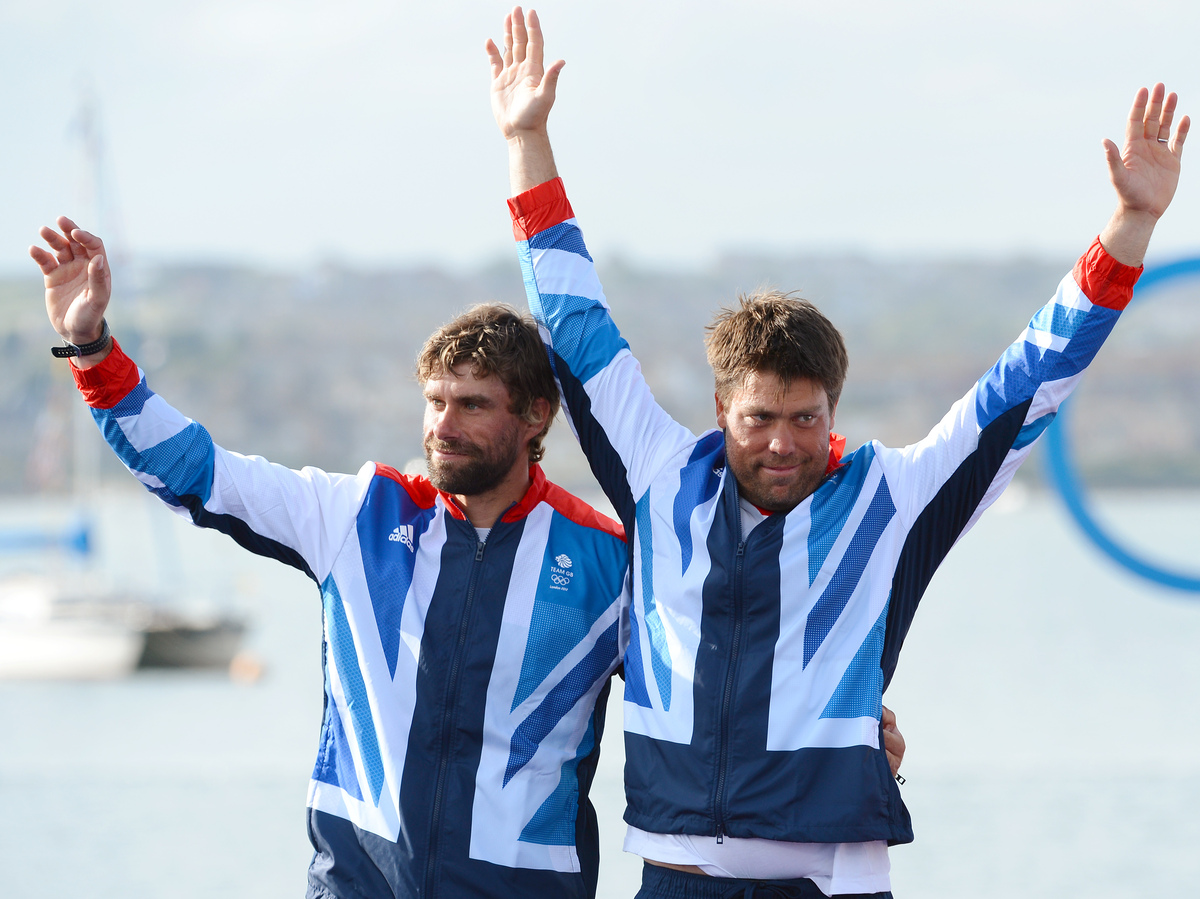 Reuters reports that the sailor who was killed is British Olympic champion Andrew 'Bart' Simpson, who won a gold medal at the 2008 Beijing games and a silver in London in 2012. 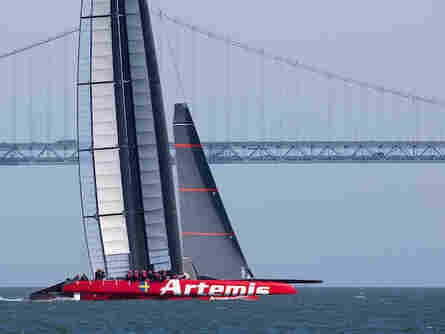 "The entire Artemis Racing team is devastated by what happened," the news agency quoted CEO Paul Cayard as saying.

The Associated Press says it's only the second time that a sailor has died during training for the America's Cup. The first time was in 1999 when a crew member from a Spanish challenger was killed when a piece of broken equipment hit him in the head.

One sailor was reportedly killed and at least one other seriously injured when a 72-foot racing catamaran that was training for the America's Cup capsized on Thursday off San Francisco.

The Associated Press, quoting Mindy Talmadge, a spokeswoman for the San Francisco Fire Department, said one person was dead and another seriously hurt after the twin-hulled boat crewed by the Swedish Artemis Racing team went over on its side.

Talmadge told the AP that both were brought to shore and taken to the St. Francis Yacht Club, where paramedics performed CPR. One person was pronounced dead, the AP says.

[Reuters quotes Talmadge as saying the second crew member hurt was briefly hospitalized but that his injuries were "minor."]

The San Jose Mercury News also quoted authorities as saying the sailor — one of 13 crew aboard the boat — was killed in the mishap.

A statement on the America's Cup website posted at 5:20 p.m. EDT reads:

"Members of the America's Cup community are on San Francisco Bay assisting Artemis Racing after the capsize of its first AC72 catamaran. The incident occurred between 12:30 pm and 1:00 pm PT.

"According to news reports, emergency crews were on site and performing CPR to a crewmember who had been trapped under the platform for an estimated 10 minutes.

"All other crewmembers had been accounted for."

The 72-foot catamarans are on the cutting edge of sailing technology and use a solid, winglike sail and lightweight materials to reach speeds of 40 mph. A boat belonging to the America's Cup defender, Team Oracle USA, capsized in October, seriously damaging its multimillion-dollar sail, but none of the crew members were seriously hurt.