Accessibility links
America's Cup Death Raises Concerns Over High-Tech Race Boats : The Two-Way The apparent drowning death of British sailor Andrew Simpson has some questioning the safety of cutting-edge catamarans that are difficult for crews to control. 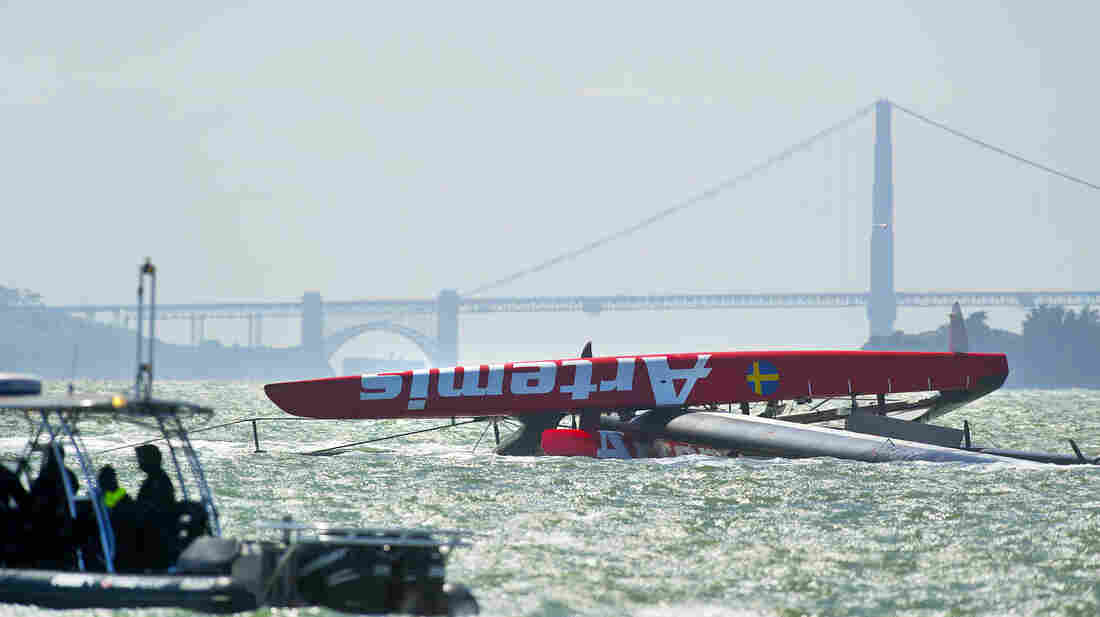 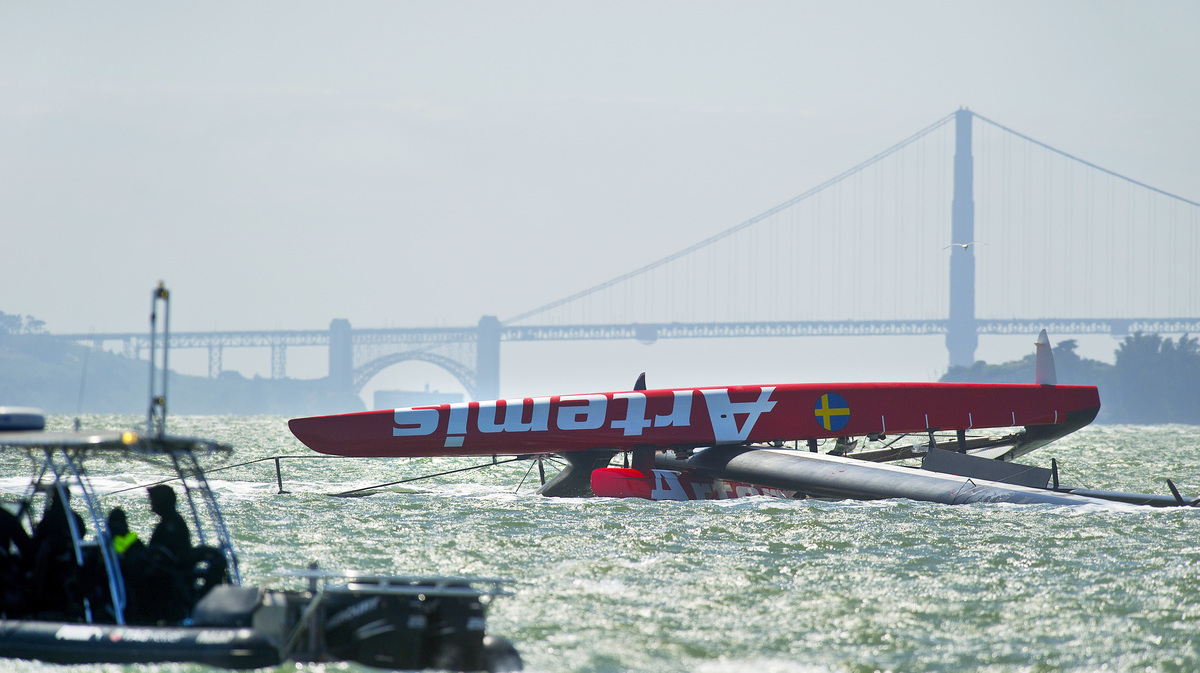 The Artemis Racing AC72 catamaran lies capsized after a training sail in San Francisco Bay on May 9.

America's Cup, the oldest and most prestigious sailing competition, has hit some choppy water.

The death last week of British sailor and gold medal Olympian Andrew "Bart" Simpson when the boat he was crewing capsized and broke up during a practice run off San Francisco, has prompted tough questions about safety.

Simpson reportedly drowned after being trapped for 10 minutes underneath the stricken boat belonging to Sweden's Artemis Racing, which hopes to challenge defender Oracle Team USA in July.

As NPR's Richard Gonzales reports, despite the tragedy and an ongoing investigation, America's Cup organizers insist the cutting-edge 72-foot catamarans are safe.

"The America's Cup will go ahead this summer," Tom Ehman, vice commodore of the Golden Gate Yacht Club, said in a statement earlier this week. "We will see the world's best sailors racing at the highest level on one of the most iconic race tracks in sport."

"[Are] these boats too much for the sailors, even for these sailors?"

While a U.S. team exploited a loophole in the design rules to sail a catamaran in the 1988 competition, after that, race organizers tweaked the rules to make sure traditional monohulls returned.

That is, until the competition three years ago, when, in an effort to shake up things giant multihulls were introduced. This Cup's AC72 catamarans are much faster but also much harder to control, and they are changing the competition in ways that have not been universally popular within the sailing community.

And last week's deadly capsize is not the first time one of these boats has run into trouble. In October, Oracle's AC72 also capsized, seriously damaging its 13-story-tall, multimillion-dollar wing-like sail. The crew of a dozen sailors narrowly escaped serious injury.

"The real question right now is, and even before this terrible accident, were these boats too much for the sailors, even for these sailors?" asks John Rousmaniere, who has written extensively about sailing and the history of the America's Cup.

"The evidence is that their safety is really questionable and when you have a death involved, that's serious business," Rousmaniere tells Gonzales from New York.

But Anthony Sandberg, president of OCSC, a sailing and adventure company in Berkeley, thinks the high-tech boats that seem to cheat disaster at every moment, have invigorated the 162-year-old race.

"Fundamentally, you just have an incredible dance," Sandberg says. "Like an elephant dancing on the head of a pin, I just think it's pretty amazing. At 40 miles an hour — and they can even go to 50 [mph]. We don't know the limits of how fast they can go."

"I've described these boats as Indy cars without brakes," he says. "You really can't stop them."

Kimball Livingston, who is senior editor for Sail magazine, agrees.

Livingston tells Gonzales: "These boats are prototypes and until you are beyond the edge you don't know where it is."