Accessibility links
Why Oklahomans Don't Like Basements : The Two-Way A high water table and red clay that soaks up the moisture make dry basements an expensive and iffy proposition right in the heart of Tornado Alley. 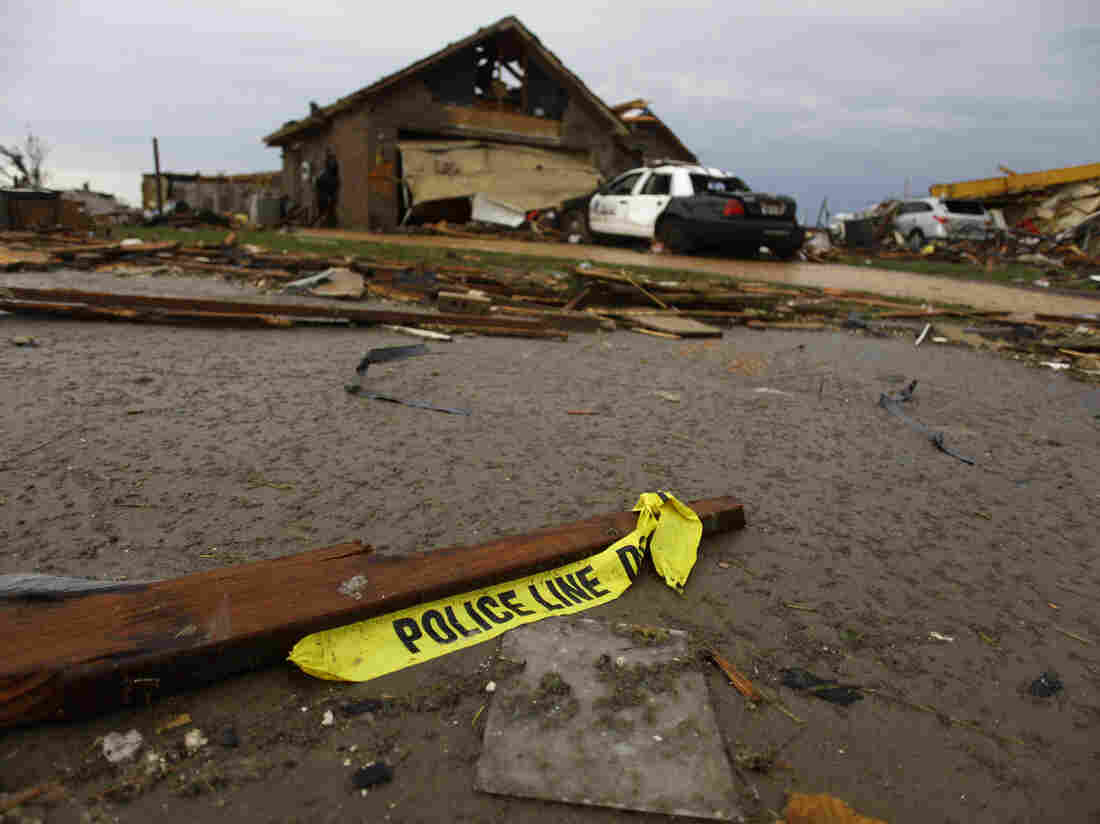 A heavily damaged home in Moore on Monday. Chances are, it doesn't have a basement. Joshua Lott/AFP/Getty Images hide caption 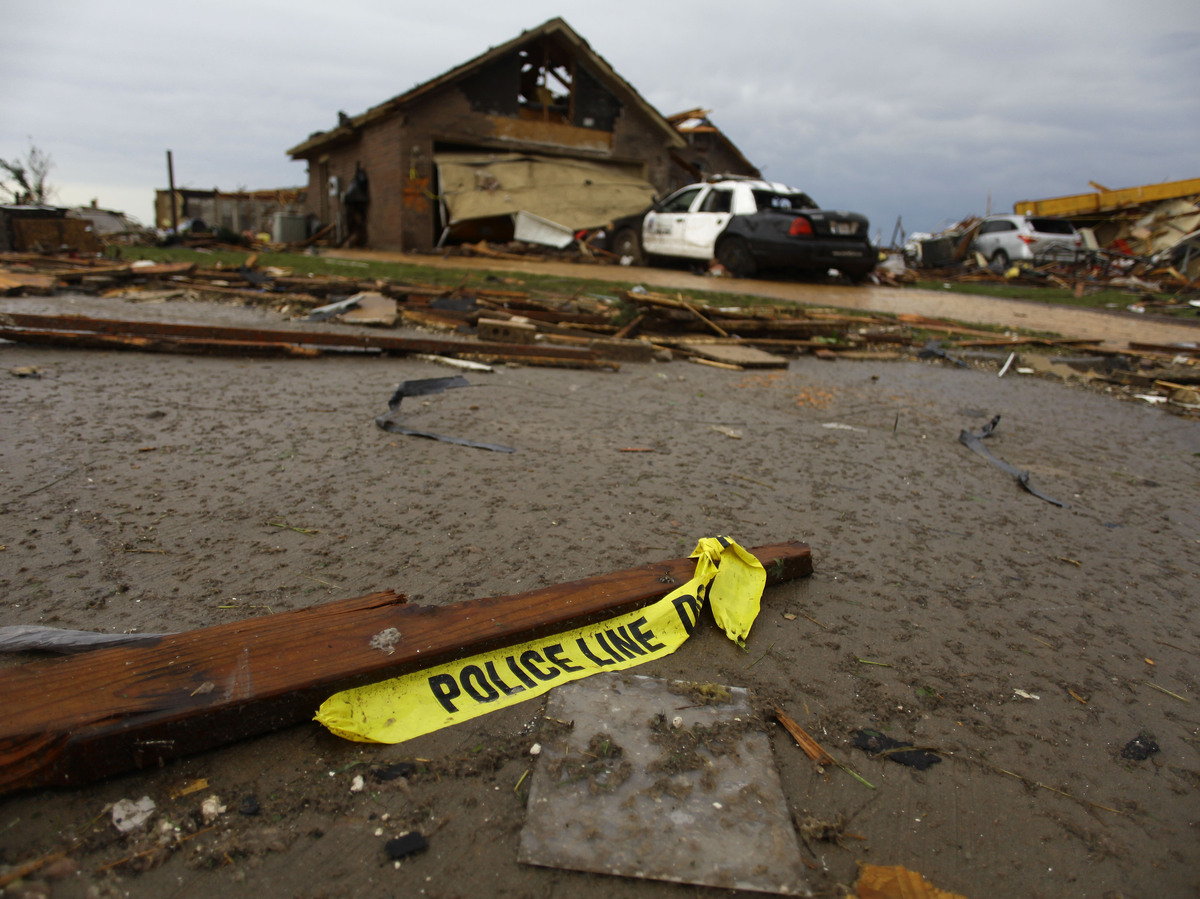 A heavily damaged home in Moore on Monday. Chances are, it doesn't have a basement.

When Randy Keller moved from Texas to the Oklahoma City area seven years ago, he couldn't find the house he was looking for.

"I was moving from Texas, where there are also a lot of tornadoes," says the professor of geology and geophysics at the University of Oklahoma who experienced the 1970 tornado in Lubbock, Texas. "But I just couldn't find one."

He didn't know it at the time, but Keller, who is also the director of the Oklahoma Geological Survey, says he later discovered that the soil and water conditions in the central part of the state turned out to be the reason for the shortage of basements.

"We've got a high water table and red clay that expands and contracts depending on how much moisture there is in the soil," Keller says. "That expansion and contraction causes cracks in basement wall, and cracks mean leaks."

He isn't the only prospective buyer to have noticed the paucity of below-ground residential accommodations.

"I've always been told our soil is not good for basements," says Russell Benson, an Oklahoma City real estate agent on Trulia, in response to a prospective buyer asking why basements were so rare in Oklahoma. "I have sold a few older homes that had basements, but they were never in that great of shape."

A realty agent friend told Keller that because basements in Oklahoma have such a reputation for leaks, they can actually be a barrier to resale.

The massive EF-5 tornado that swept through the region Monday, killing at least 24 people, missed Keller's basement-less home by only a few miles.

For John Hole, the president of Foundation King contractors, which operates in the Oklahoma City area, it was an even closer call. The twister hit just a mere six blocks from his house. But he and his wife weren't there at the time. They don't have a basement and decided instead to shelter at a nearby church, which does have one.

As the name of his company implies, Hole does foundations — but not many basements, especially in single-family homes. It's that shifting red clay that's the problem, he says, mostly for the central and northeastern parts of the state.

"Red clay is susceptible to water and heat. It moves; it causes cracks," he says. "So, you're going to need pumping systems and backup power to run the pumps because eventually the water's going to get in."

"For most homeowners, it just doesn't make sense, moneywise," he says.

According to Weather Underground, the frost line and Oklahoma building codes also might be a contributing factor:

"In the northeastern U.S., building codes generally require homes to be built with their footing below the frost line, which means that builders already excavate enough earth during construction to create a basement.

"In the southern U.S., however, building codes don't require this."

Adding a basement then would require more excavation than a contractor would normally be required to do.

Mike Hancock, president of Basement Contractors, says basements don't have to leak. In fact, on his company's website, there's a prominent link to a section called "debunking the myth."

"There's an old stereotype that you can't build basements in Oklahoma," says Hancock, whose business is one of a few in the area that will even build residential basements.

His theory is that basements are out of many contractors' comfort zone, so it's easier for them to say it's impossible than to admit they can't do a leakproof job.

Basements are so rare, Hancock says, that the listings service for local residential real estate doesn't even have a box to check for a basement. But the fear of tornadoes is a "prime concern" of many of his customers who do want a basement in their home, Hancock says.

"It's always in the back of their minds, what am I going to do if there's a tornado," Hancock says.

He says that a lot of times, he's asked to put a safe room inside the basement itself, with "extra-thick interior walls, FEMA-approved doors and concrete supports instead of wooden joists," which can splinter and become razor-sharp shrapnel during a tornado.

At a news conference Tuesday, Albert Ashwood, the director of the Oklahoma Department of Emergency Management, said that the Federal Emergency Management Agency had funded similar safe rooms for more than 100 schools, but that the two schools flattened by Monday's tornado were not on the list. At least nine students were killed at the two schools.

Safe rooms, Ashwood said, are a "mitigating measure. It's not absolute." However, any safety measure could have helped the kids survive, he said.

One alternative, he said, is a small shelter dug under a garage that can fit perhaps six people. Hancock says his company doesn't do that kind of work, but he thinks it's a good idea.

"The only problem is that they're small and with debris piled on top, it could take rescuers some time — perhaps days — to reach the survivors," he says.

Keller, the geology professor, still puzzles over the basement thing.

"I guess it's not considered a plus," he says. "But, a few more of these situations like what happened yesterday and maybe people will change their tune."