Accessibility links
In Oklahoma, Rescue Efforts Give Way To Recovery : The Two-Way Officials think they've found all the survivors, and victims, of the massive tornado that devastated the community of Moore. The official death toll stands at 24. More than 230 people are said to have been injured.

In Oklahoma, Rescue Efforts Give Way To Recovery

In Oklahoma, Rescue Efforts Give Way To Recovery 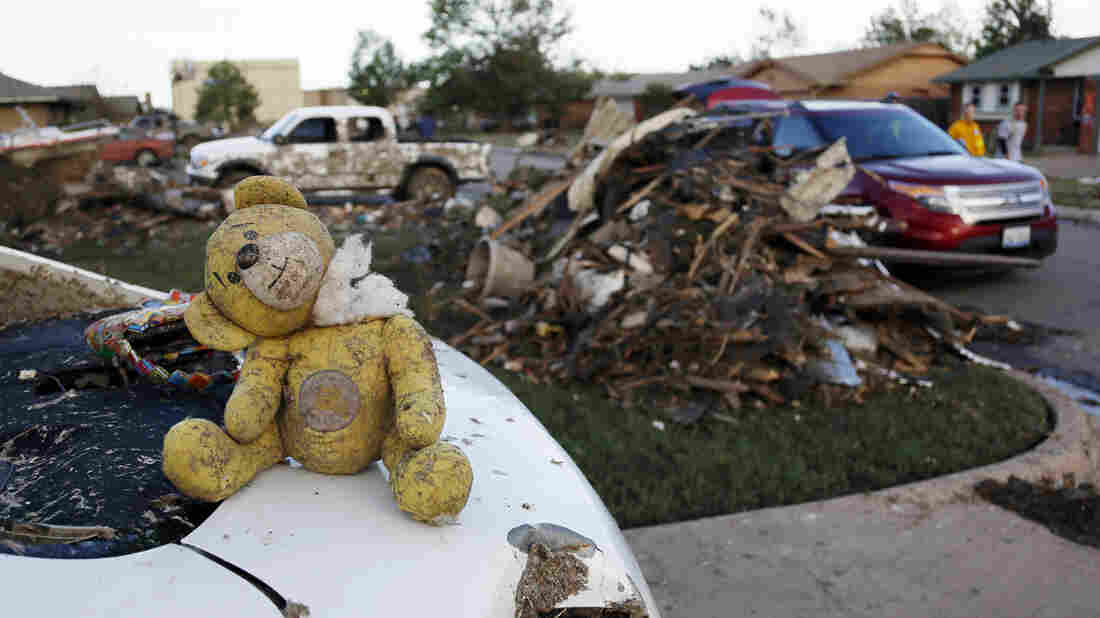 A teddy bear sits atop some of the rubble in Moore, Okla. Rick Wilking /Reuters /Landov hide caption 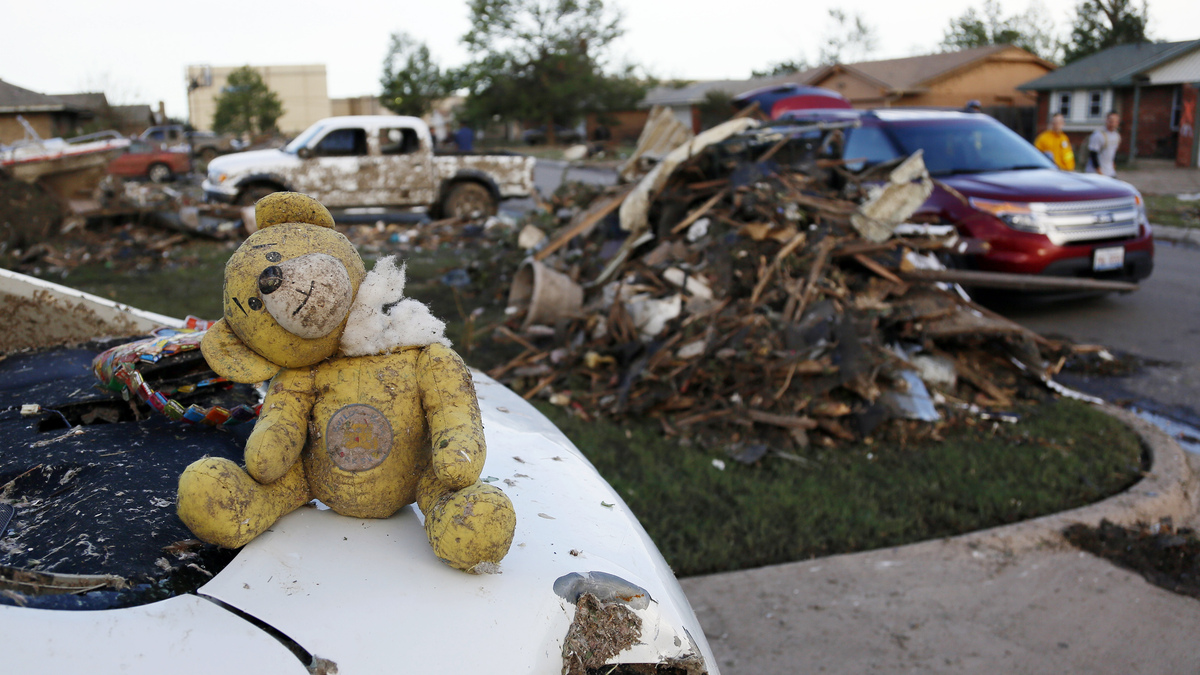 A teddy bear sits atop some of the rubble in Moore, Okla.

The news Wednesday from Moore, Okla., much of which was destroyed by a massive tornado Monday, begins with word that officials doubt they will find any more survivors or bodies under the hundreds of homes, businesses and other buildings that were leveled.

— Authorities doubt any more victims or survivors will be found in the rubble of homes, businesses and other buildings destroyed by the tornado that roared through Moore, Okla., on Monday.

— The official death toll remains at 24. Of those, authorities said Wednesday that 10 were children. More than 230 people are said to have been injured.

— For the first day since the tornado struck, the National Weather Service is not warning that there could be more severe weather in the region.

That means the official death toll from the storm remains at 24 — a figure that could still change. More than 350 people are said to have been injured by the twister, which packed winds of more than 200 mph.

Word about the low likelihood of finding any more victims or survivors also means the mission in Moore is shifting from a rescue operation to recovery efforts.

On Morning Edition, NPR's Kirk Siegler reported that because hundreds of people have been displaced by the tornado, Red Cross officials are preparing to keep emergency shelters open for weeks. St. Andrews United Methodist Church in Moore has been stocked with food and supplies, Kirk reported, "and donations have also been pouring in" to other shelters nearby.

Also on Morning Edition, NPR's David Schaper reported about James Rushing, who lived across the street from one of the two elementary schools destroyed by the storm. As the tornado approached, Rushing ran from his home to Plaza Towers Elementary, where his foster son was a student. Rushing found shelter with some of the children and staff in a bathroom. Both he and his son were among the survivors.

The sounds "were just deafening," Rushing says. "You could hear windows ... you could even hear wood breaking. It was so loud you couldn't hear anything but things being destroyed."

His home was destroyed. Rushing believes he'd be dead if he had stayed there. But even though he and most of the children at the school made it through the storm, Rushing says that in reality, "there were no safe rooms in that school. There was nowhere for these children to take cover but in a bathroom." Authorities have said that seven of the children killed during the tornado were students at the school.

NPR's Russell Lewis reports that there are no more 'missing' reports coming in, so the toll from Monday's twister (as per Gov. Mary Fallin's office) stands at 24 dead and 353 injured. The number of injured has been revised upward from the figure we were reporting earlier of "more than 230."

Financial institutions are trying to get cash into the hands of tornado victims. The Bank of Oklahoma has set up a mobile ATM at the First Baptist Church, which is being used as a shelter, with four more machines on their way.

It does storm victims little good to get insurance checks and not have ready cash for food and gas, says Oklahoma Banking Commissioner Mick Thompson. He's asked banks to waive their normal hold period for such deposits.

"We've asked them to give immediate credit," Thompson says. "Some are issuing debit cards immediately."

Thompson notes that HUD is also trying to put foreclosures on hold for 90 days in the area.

Michel asked Kean what people around the nation can do for the people of Moore. "Don't just load up and go," the mayor advised. "A lot of people mean well, but a lot of times, you're hindering progress. ... Find out exactly what they need, and then gather a point person to take, you know, one group of supplies down there ... or donate to your local Red Cross or different organizations like that that are immediately down there and able to help."

And Kean offered advice for those who live in tornado-prone areas: "Make sure that you're prepared. [And] if you hear sirens go off — take cover. Don't wait for a second siren. ... Have a plan already in place, so that when something does occur, you are ready, you don't have to think about some place where you have to go, you HAVE some place to go. And that's the key thing. Preparation."

The White House confirmed this afternoon that President Obama will visit the tornado-ravaged area on Sunday.

The 24 people who were killed included 10 children, according to a statement sent to reporters by the office of Oklahoma Gov. Mary Fallin. That's a slight change from what officials were saying Tuesday, when they reported that 9 children were among the 24 victims.

According to the statement, the Oklahoma Chief Medical Examiner's Office has identified 23 of the 24 people killed. The ages of those killed range from 4 months to 65 years (though the ages of five victims have not yet been confirmed).

In early reports from Moore, it was said that 7 children at the Plaza Towers Elementary School had drowned. In fact, according to the medical examiner's office, they were crushed to death. The official causes: Either "mechanical asphyxia," "blunt force trauma" or asphyxia.

Update at 9:45 a.m. ET. Governor Says State Will Talk About "Safe Rooms" At All Schools:

On Morning Edition this hour, Oklahoma Gov. Mary Fallin (R) was asked whether all schools in the state should be required to have "safe rooms." Neither of the elementary schools in Moore that were destroyed had such facilities.

"We are going to be talking about that," Fallin said. She noted that newly built schools in the state do have storm rooms or storm shelters, but that older buildings — such as those in Moore — do not. All schools are required to have evacuation plans, she added.

Fallin hailed the teachers in Moore. They "are really heroes" for the efforts they made to protect the children there, the governor said.

NPR's coverage of the tornado is collected here. Some of the morning's related news includes:

-- The storm likely caused more than $1 billion in damages, according to Oklahoma City's KFOR-TV.

-- Officials say that among those who were injured, "four individuals were struck by vehicles or other large objects, 85 were struck by other objects and 148 sustained cuts or pierces," The Oklahoman writes.

-- "Moore Police spokesman Jeremy Lewis said more than 200 people were rescued from the rubble — all of them Monday night," says CBS News. "No survivors were found Tuesday, he added."

-- For the first day since the tragedy in Moore, the National Weather Service is not warning that there could be more severe weather in that area.