Accessibility links
British Driver Says She's Sorry In 'Twit And Run' Case : The Two-Way A British driver who struck a cyclist with her car — and who then bragged about the incident on Twitter — has issued an apology. The incident caused an uproar after the collision Sunday. 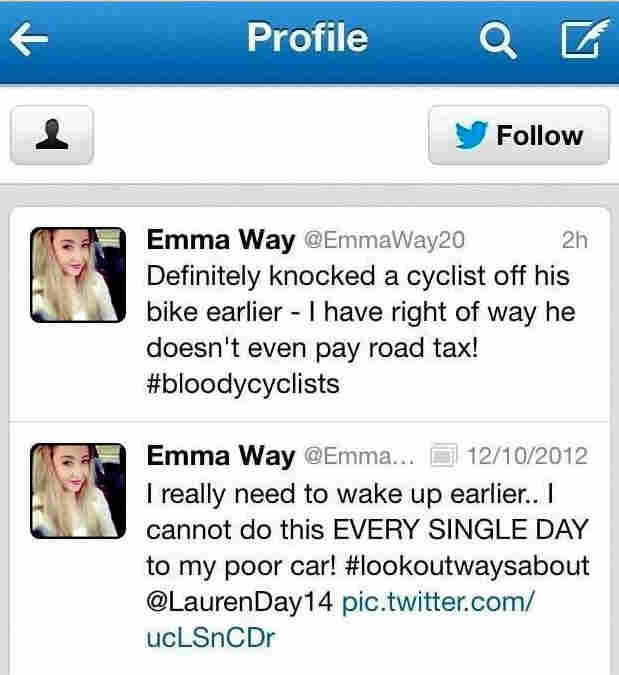 A screen capture shows a tweet sent by Emma Way after she was involved in a collision Sunday. She has apologized for the incident. @FSUSteve hide caption 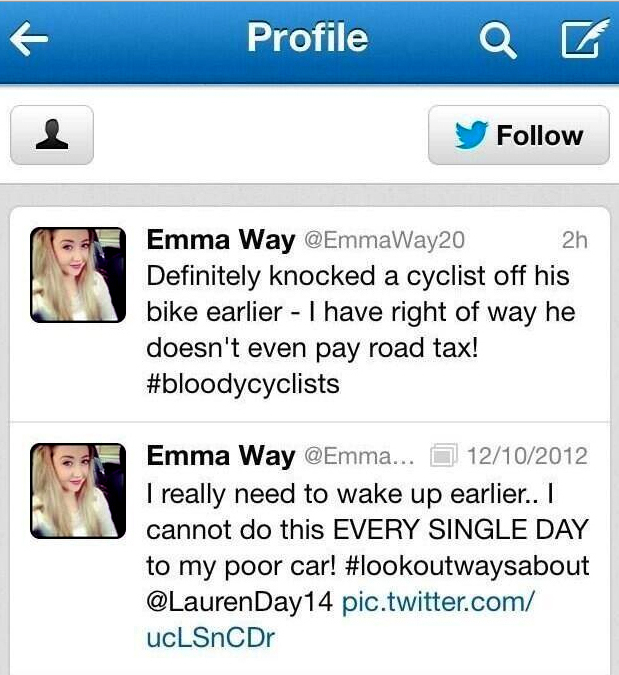 A screen capture shows a tweet sent by Emma Way after she was involved in a collision Sunday. She has apologized for the incident.

A British driver who struck a cyclist with her car — and who then bragged about the incident on Twitter — has issued an apology. The incident caused an uproar after the collision Sunday.

"Definitely knocked a cyclist off his bike earlier - I have right of way he doesn't even pay road tax! #bloodycyclist," tweeted Emma Way, in a message that has been widely circulated despite her apparent attempts to delete it, and seemingly her Twitter account, @EmmaWay20.

The story grew to prominence at the Road.cc site, which termed it a case of "twit and run." And as is the way with such things, the hashtag #bloodycyclists became a magnet for people who wanted to discuss the story, or talk about bikes sharing roads with cars — or simply to make jokes riffing on the term itself.

It wasn't long before the cyclist involved, Toby Hockley, 29, who works as a chef, saw the tweet. He then tracked Way down on Facebook.

"Oh hi! That was me you hit and FYI, you didn't knock me off," he wrote, according to Road.cc. Hockley also used colorful language to add that a small car wasn't enough to hurt him.

The collision occurred Sunday, as Hockley rode with other cyclists on a narrow country road, part of the annual Boudicca Sportive ride. After a car came around a tight corner, its side-view mirror clipped Hockley; he was sent into a hedge, he tells the site EDP24.

Hockley then gathered himself and continued on the ride; he finished the 100-mile course in a bit more than six hours and 20 minutes. He has told multiple media outlets that he had intended to forget about the crash, until he saw Way's tweet.

Way, 21, spoke to the news agency ITV Wednesday, saying, "It was a spur-of-the-moment, stupid tweet," she says. "There are so many tweets that go around," she added, saying that social networks blow things out of proportion.

"It was a spur of the moment thing, and you know, I'm sorry. I didn't realize it would ever escalate to this," she said — prompting some critics online to wonder if Way was apologizing for the collision, or only for the tweet.

Hockley has said he doesn't want to press charges against the driver.

"I would like her to get a telling off from the police rather than anything that's going to affect her life in the future," Hockley tells EDP24. "I don't her to lose her licence or anything. I just want an apology really."

It remains possible that Way could be charged with leaving the scene of an accident. Police in Norfolk, northeast of London, have spoken to her. For her interview with ITV, Way was joined by an attorney.

"I burst out laughing, I couldn't believe how lucky I was and that I was still in one piece," he told the BBC. "I had a hug with my co-rider at the side of the road and was just full of adrenaline. But when I finished, the aches and pains set in and I had a bit of sulk in the cafe and had an ice-cream."

In its report, the BBC also noted that all taxpayers in the United Kingdom pay for its roads.

"If I did cause any damage to him, I would obviously apologize," Way says of Hockley. "But I didn't feel him even touch my car, so — apart from his handlebar donked the wing mirror.... If I knew that he was hurt, I never would have driven off. That is just not in my nature."

Way says she has been suspended from her job at an accounting firm, and might not be able to return to work there.

"I just want to say sorry [for] any discomfort it's caused for anybody. And if I could take back doing that tweet, I would," she says. "You know, my whole career is at risk now."

She added that she doesn't hate cyclists, saying that she is one, herself.