Accessibility links
Report Of Liquid Woolly Mammoth Blood Prompts Clone Talk : The Two-Way Scientists in Siberia say they've extracted blood samples from the carcass of a 10,000-year-old woolly mammoth, leading to speculation that a clone of the extinct animal might someday walk the earth. But researchers say the find must be studied further to know its potential. 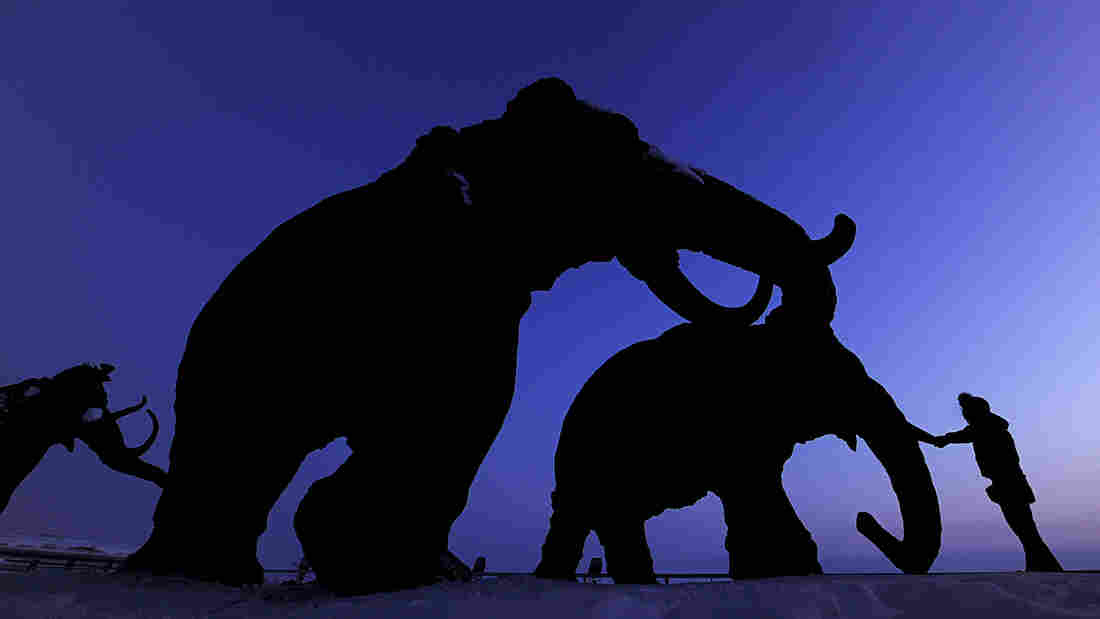 A file photo from 2011 shows a man touching a giant bronze sculpture of a mammoth in the Siberian city of Khanty-Mansiysk. A team of Russian and South Korean scientists who found a well-preserved frozen woolly mammoth carcass this month say it also included blood. Natalia Kolesnikova/AFP/Getty Images hide caption 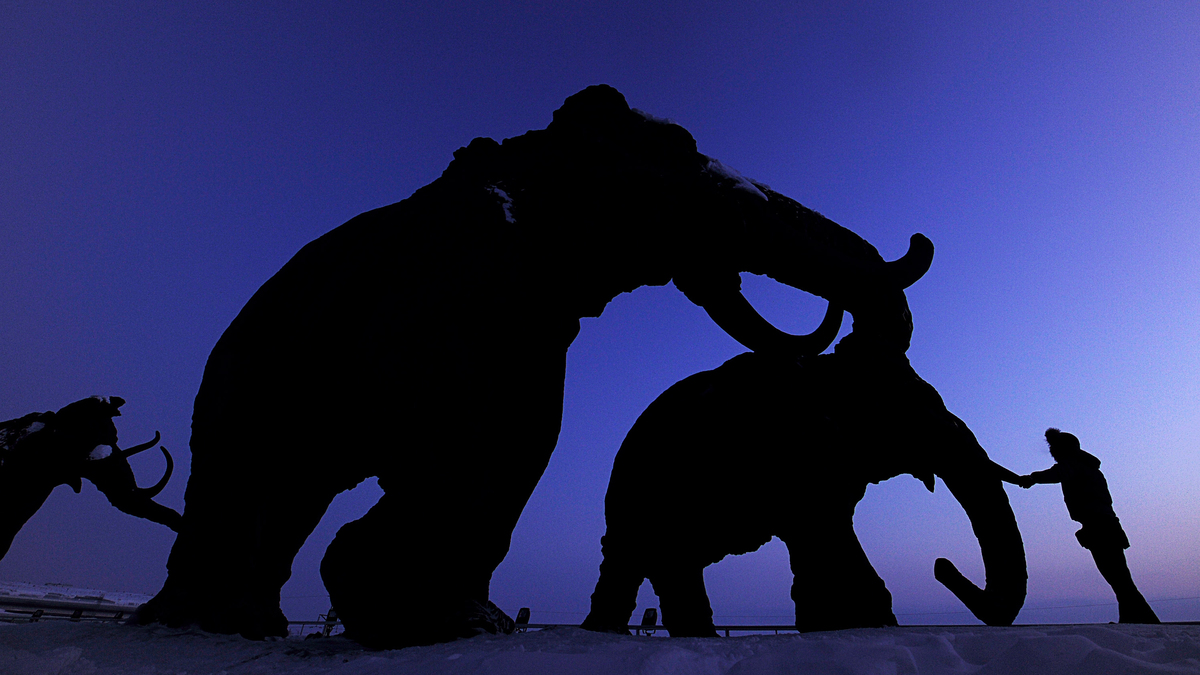 A file photo from 2011 shows a man touching a giant bronze sculpture of a mammoth in the Siberian city of Khanty-Mansiysk. A team of Russian and South Korean scientists who found a well-preserved frozen woolly mammoth carcass this month say it also included blood.

Scientists in Siberia say they've extracted blood samples from the carcass of a 10,000-year-old woolly mammoth, reviving speculation that a clone of the extinct animal might someday walk the earth, if scientists are able to find living cells. But researchers say the find, which also included well-preserved muscle tissue, must be studied further to know its potential.

The female mammoth's carcass was found "in good preservation on Lyakhovsky Islands of Novosibirsk archipelago," according to a news release about the discovery by North-Eastern Federal University in Yakutsk, Siberia.

"The fragments of muscle tissues, which we've found out of the body, have a natural red color of fresh meat," said lead researcher Semyon Grigoriev of the university's Museum of Mammoths. "The reason for such preservation is that the lower part of the body was underlying in pure ice, and the upper part was found in the middle of tundra."

The paleontologists say they found a liquid they believe to be blood beneath the animal's belly.

"The blood is very dark, it was found in ice cavities bellow the belly and when we broke these cavities with a poll pick, the blood came running out," Grigoriev said. " Interestingly, the temperature at the time of excavation was -7 to –10ºC. It may be assumed that the blood of mammoths had some cryoprotective properties."

But other scientists caution that it's too early to know whether the sample recovered from the site is blood, or perhaps some other liquid. And as Smithsonian.com reminds us, Grigoriev caused a stir last year when he claimed to have found a mammoth's blood marrow — a material that, if recovered, would do much more to hasten a possible clone than would blood.

The Siberian scientists say they want to work with Canadian professor Kevin Campbell, who has written in the journal Nature Genetics that mammoths' blood may have had special properties that allowed its hemoglobin to deliver oxygen to the body tissues even in extreme cold.

Campbell is also famous for "resurrecting this red blood cell protein hemoglobin from a woolly mammoth," as he told the CBC last year.

Asked about the new Siberian discovery by Scientific American, Campbell says he has no way of knowing whether what "appears to be a remarkable finding" is genuine — but he also said he wants to study the specimens. And he offered some ideas about why the sample was in a liquid state, even at temperatures such as minus 17 degrees Celsius.

"For instance, maybe they did have some sort of cryoprotectant (arctic ground squirrels certainly seem to), and this became concentrated during the long period of preservation," he tells Scientific American's Kate Wong. "Conversely, maybe they had absolutely no 'antifreezes' and instead most of the water in the sample was taken up by the surrounding ice, such that the remaining 'blood' became extremely concentrated–which would lower its freezing point."

Another explanation, he says, could be that the sample contains ice-living bacteria, which might have lent their cryoprotective properties to the pooled blood.

The North-Eastern Federal University says that some samples will also go to its "Mammoth rebirth" project, between the school and South Korea's Sooam Biotech Research Foundation, with the goal of cloning a mammoth.

As our colleagues at the TED blog remind us, humans have a special fascination with wooly mammoths.

"Woollys are a quintessential image of the Ice Age ... We seem to have a deep connection with them as we do with elephants," DNA specialist Hendrik Poinar says in a TED talk. "I have to admit there's a part of the child in me that wants to see these majestic creatures walk across the permafrost of the North."

And for some folks, that fascination is joined by a desire to make money.

"Today, the hunt is on for woolly mammoth tusks in the Arctic Siberia," writes TED's Becky Chung. "Due to global warming, the melting permafrost has begun revealing these hidden ivory treasures for a group of local tusk-hunters to find and sell. A tusk can range from 10-13 foot in length and a top-grade mammoth tusk is worth around $400 per pound. Mammoth ivory, unlike elephant ivory, is legal."

As for the lofty goal of possibly cloning the extinct animals some day, not everyone is convinced it's a good idea to try to bring them back.