Accessibility links
Friday's El Reno Tornado Called Widest In U.S. History : The Two-Way New data about the tornado, which has been blamed for 18 deaths, was released Tuesday. Its intensity was upgraded to the maximum of EF5, and the weather agency says its winds reached 295 miles an hour. 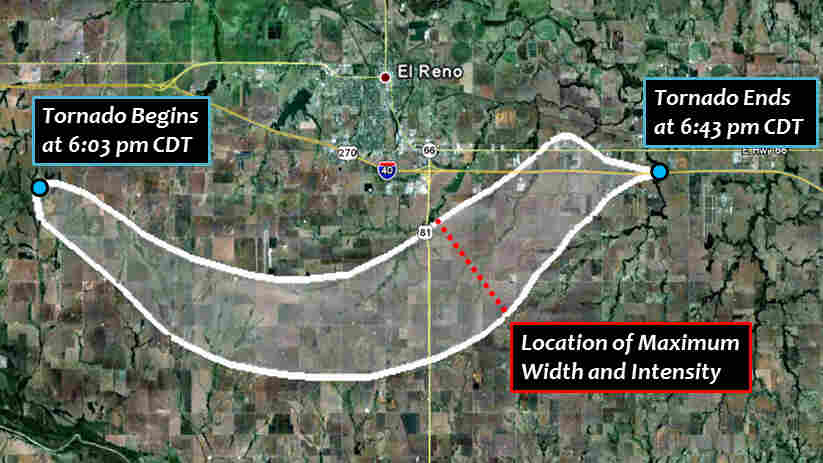 Data released Tuesday shows that the deadly El Reno tornado that struck Friday was the widest every recorded in the U.S., at 2.6 miles. National Weather Service hide caption 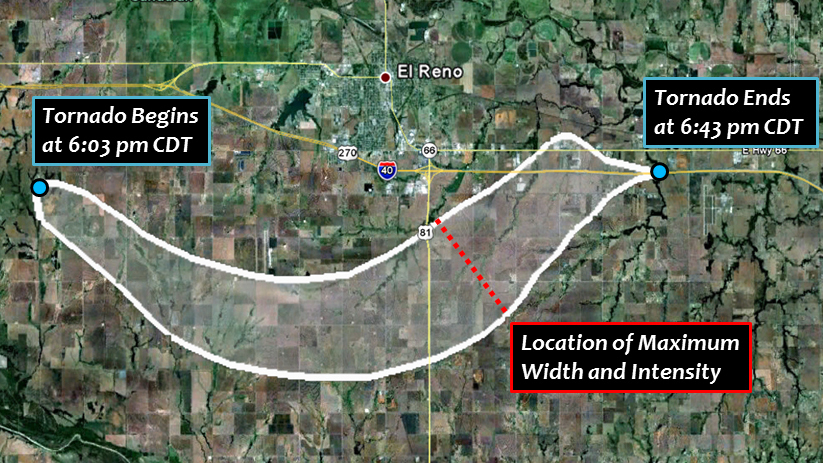 Data released Tuesday shows that the deadly El Reno tornado that struck Friday was the widest every recorded in the U.S., at 2.6 miles.

The tornado that struck El Reno, Okla., Friday "is officially the widest known tornado in the U.S.," says the National Weather Service office in Norman, Okla., announcing today that at its widest, the storm stretched across 2.6 miles.

New data about the tornado was released Tuesday, along with an update on the death toll from the storm system that wreaked havoc on a broad swath of Oklahoma Friday night. The state medical examiner has now raised the count of people killed by tornadoes and flooding from 18 to 19, reports KJRH TV and other news outlets.

The El Reno tornado's intensity was upgraded to the maximum rating of EF5; the weather agency says its winds reached 295 miles an hour while it was on the ground in the area west of Oklahoma City.

"This tornado is double the width of the May 20 tornado in Moore, Okla.," reports Oklahoma City's KFOR TV. "The F-4 Wilber-Hallam, Nebraska, tornado May 22, 2004 was the previous record holder for the widest tornado on record at 2.5 miles wide."

The El Reno twister took about 40 minutes to plow a path more than 16 miles long, according to the agency.

The 11-day span between the El Reno storm and the May 20 tornado that devastated a large portion of Moore "is the shortest time span between EF5 tornadoes in Oklahoma history," the National Weather Service says.