Accessibility links
'An Inland Ocean Of Flooding': Disaster In Central Europe : The Two-Way Flooding strikes central Europe, with deaths and damage reported in Austria, the Czech Republic, Germany and Slovakia.

'An Inland Ocean Of Flooding': Disaster In Central Europe

'An Inland Ocean Of Flooding': Disaster In Central Europe 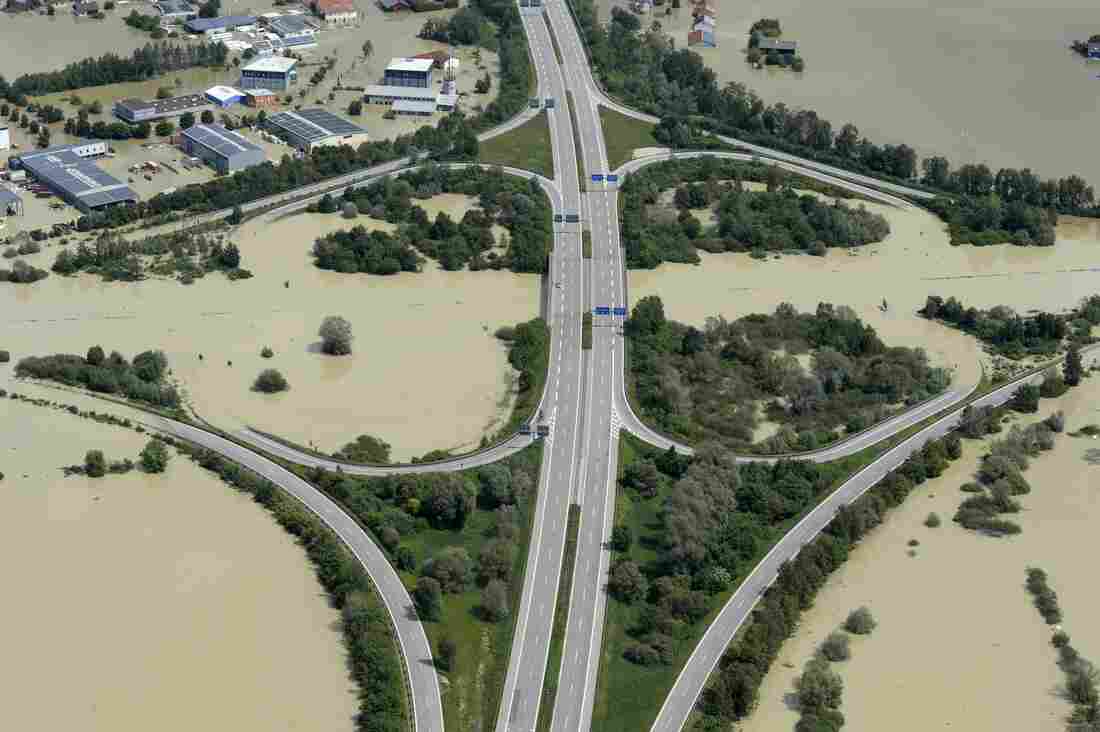 A cloverleaf is partially flooded by the river Danube near Deggendorf, southern Germany, on June 6, 2013. Christof Stache/AFP/Getty Images hide caption 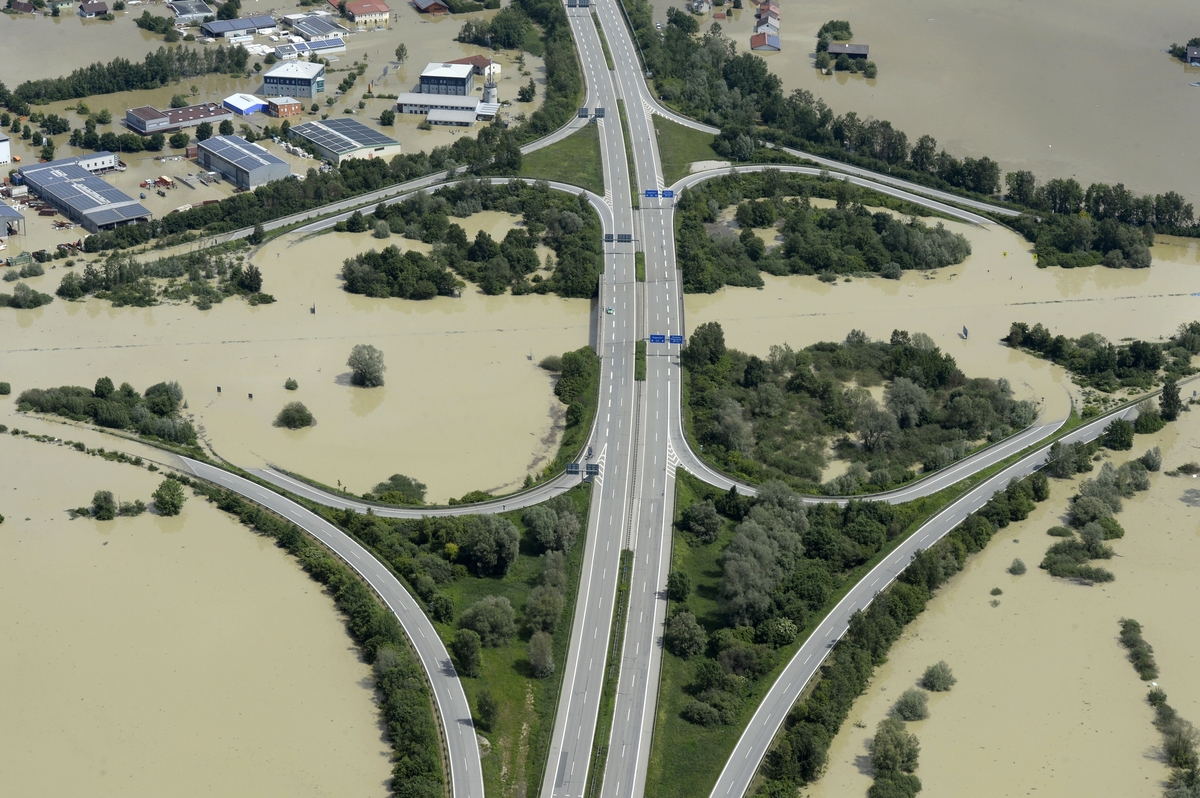 A cloverleaf is partially flooded by the river Danube near Deggendorf, southern Germany, on June 6, 2013.

At least 16 people are dead after several days of flooding in Austria, Germany, Slovakia and the Czech Republic. Historic cities are underwater, and flood victims are perching on rooftops for safety. It's been a rainy spring in the region, and heavy storms last weekend forced many rivers and streams over their banks.

And more rain is forecast for this weekend in parts of central Europe.

The Elbe River crested Thursday morning in Dresden, Germany, according to Deutsche Welle, which says water reached nearly 29 feet today and threatens areas in northeast Germany. Dresden officials warn that while the river there isn't expected to rise higher, it won't recede for days. 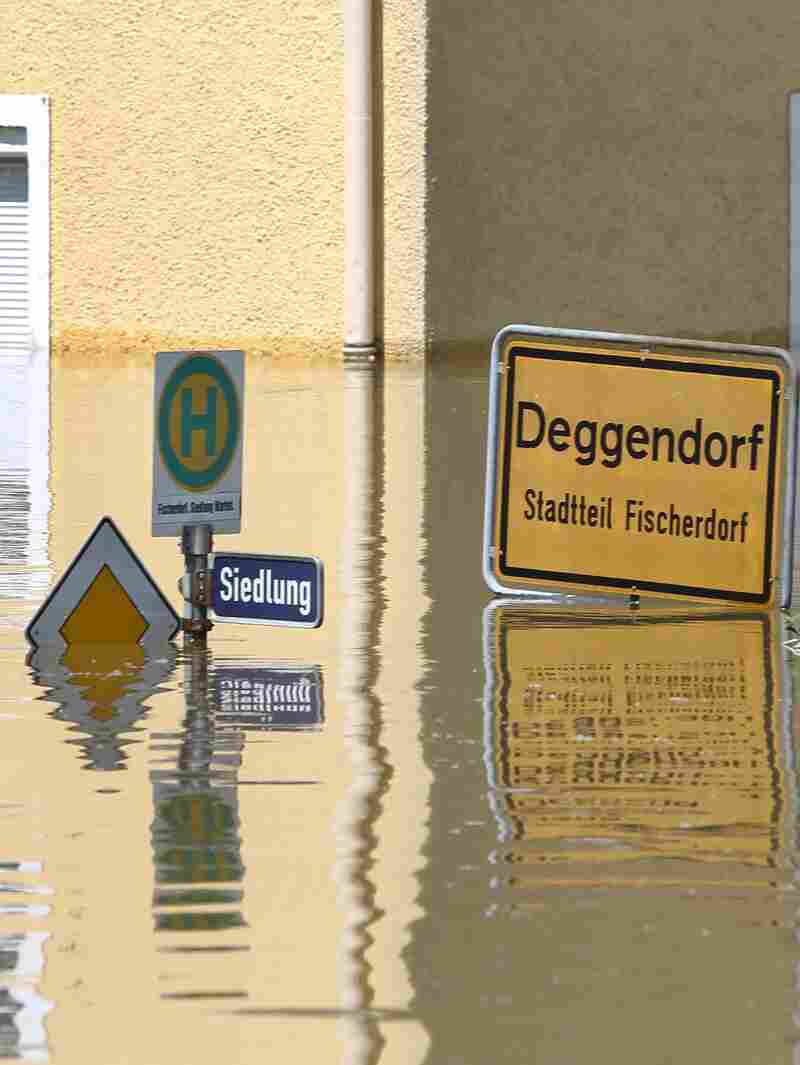 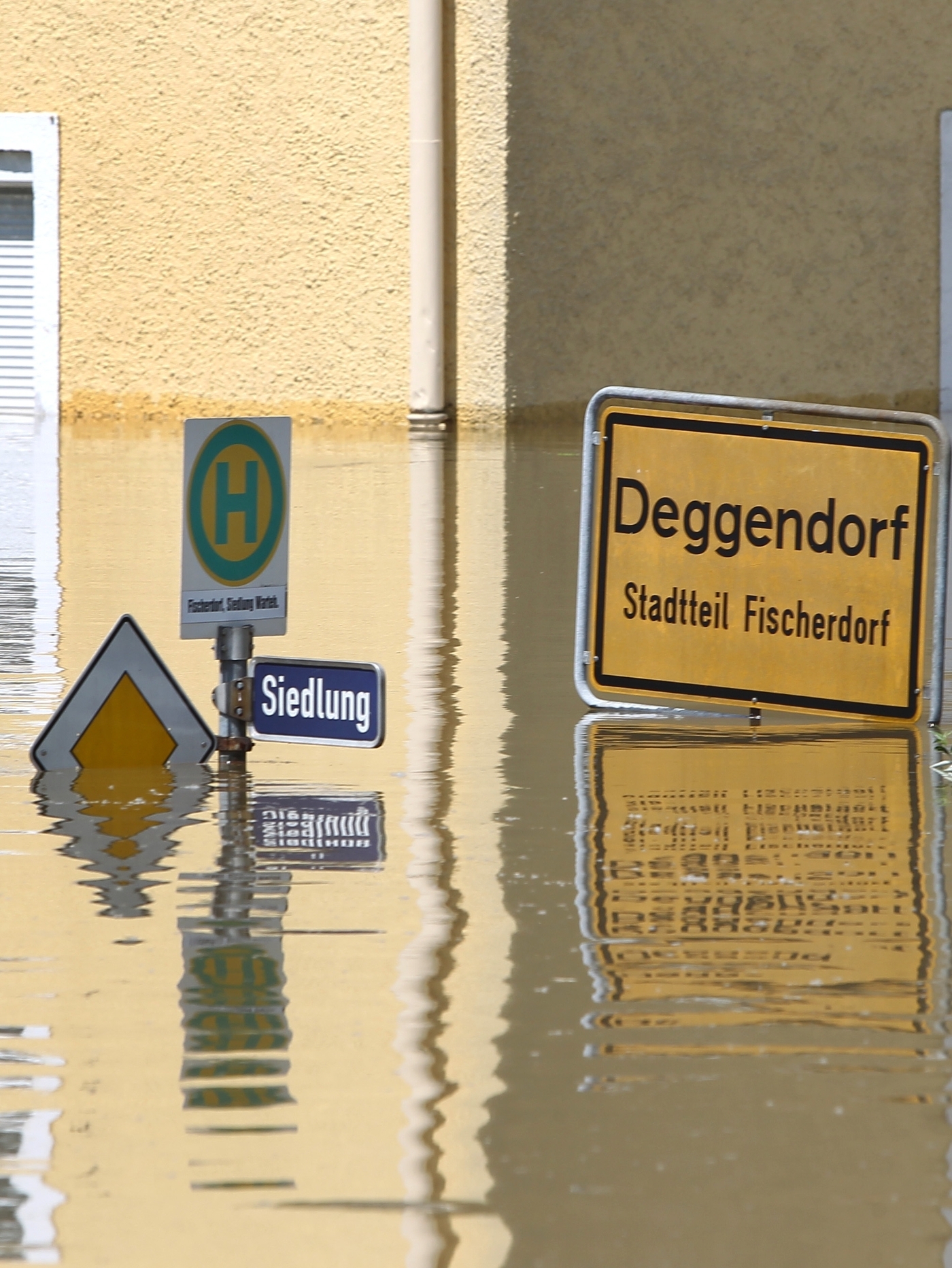 A submerged sign in the floods in Deggendorf, southern Germany, on June 5, 2013.

NPR's Soraya Sarhaddi Nelson reports that the situation remained critical in the in the Bavarian town of Deggendorf, where dams have broken along both the Danube and Isar rivers. She says entire neighborhoods are underwater. The water is still surging, and now northern Germany is under threat from the flooded Elbe and Danube rivers, and their tributaries.

Germans in several cities were frantically filling sandbags to hold back the "inland ocean of flooding" that has hit central Europe, as The Associated Press describes the region.

Meanwhile, in the Czech Republic, the Elbe was still swelling and could reach as high as 36 feet.

Recovery is going to be costly. The Wall Street Journal suggests the cost of the European floods could surpass that of the devastating floods of 2002, which totaled nearly $20 billion (paywall protected). Reuters reports that the Czech Insurance Association estimates the damage in that country at more than $381 million so far.

Bruce Konviser tells NPR's Newscast unit that the Czech government has pledged $250 million for repairs but that damage estimates are incomplete. Many Prague roads, he adds, are still submerged and the capital's subway system isn't fully functional.

In Prague, the Vltava River burst its banks earlier in the week, but the historic city center was mostly spared. CNN says hundreds of Czech towns were inundated, though "some of the 19,000 people evacuated are now able to return to their homes."

At least one chemical company closed factories in the Czech Republic because they are situated along the Vltava River, Reuters says. There have been no reports of damage at any of the plants.

In Austria, The New York Times says the Salzbug and Tyrol areas have been hardest hit. And in Slovakia, the AP says the Danube continues to rise in the capital city of Bratislava but that barriers have held back the floodwaters.

The news service adds that "the floods have killed eight people in the Czech Republic, five in Germany, two in Austria and one in Slovakia."