Accessibility links
'Now What?': Greeks Confront Shutting Of Public Broadcaster : The Two-Way The Greek government abruptly shut down ERT and fired its staff in an effort to downsize the public sector, which has been criticized as a bastion of corruption and bloat. But many Greeks see the rushed closure as a dictatorial move that will compromise the country's troubled media. 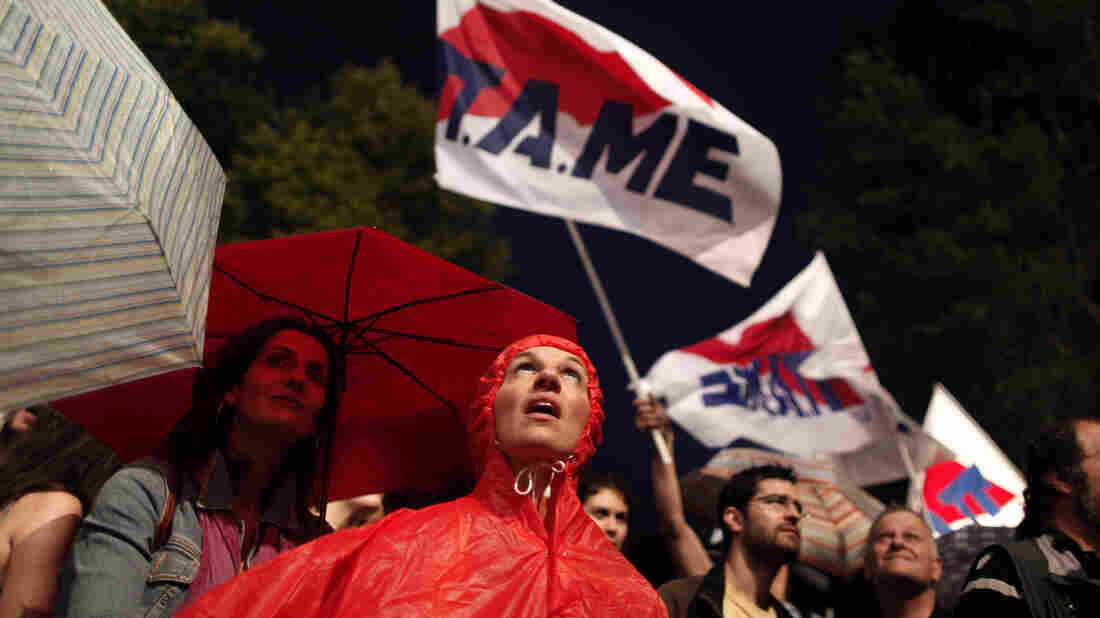 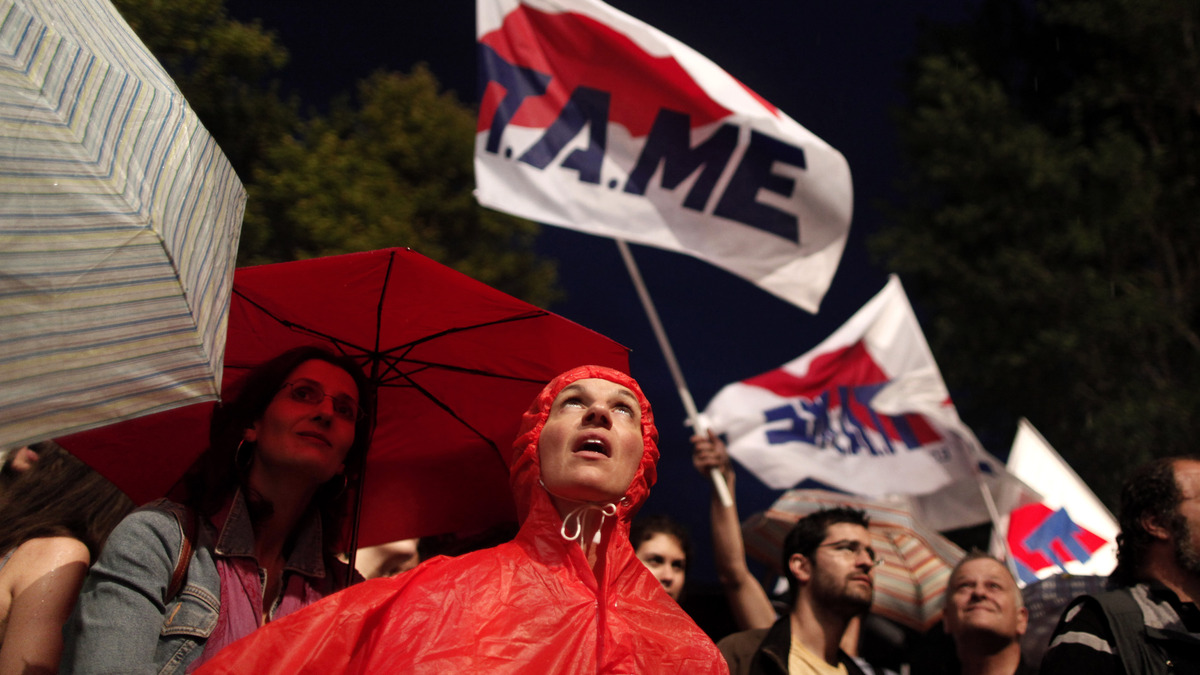 Protesters wave flags outside the Athens headquarters of broadcaster ERT on Wednesday. Prime Minister Antonis Samaras shut down the network Tuesday, but workers are occupying the building.

The Greek government has abruptly shut down the country's public broadcasting network and fired all of its staff.

Prime Minister Antonis Samaras wants to show the country's creditors, including the European Union and International Monetary Fund, that he's downsizing the public sector, which has been criticized for corruption and bloat. But many Greeks see the rushed closure as a dictatorial move that will compromise the country's troubled media.

Just hours after the government announced the closure Tuesday, supporters of the Hellenic Broadcasting Corp., called ERT, gathered outside the network's headquarters in a leafy Athens suburb. Some sang protest songs from the '60s, when Greece was run by military dictators. The nearby church of Aghia Paraskevi rang its bells in support of the network just as Yiannis Gemenoglou, a retired state employee, walked to join the sit-in in support of the network he's listened to for decades.

"It is the modern identity of this country," he says.

Like other Greeks, Gemenoglou paid an annual licensing fee of 50 euros — about $66 — to keep ERT on air. He doesn't buy the government's claim that firing ERT's 2,600 employees will change the Greek bureaucracy's "culture of waste."

"It's not the workers who caused the problems here," he says. "It's the leaders who run this place. They spent years stealing money — and they're still doing it."

Gemenoglou is talking about the network's board of directors. For decades, they were appointed by political parties. Those appointees often secured jobs for family or friends, says Elias Mossialos, a former government minister who now teaches at the London School of Economics.

"Since the organization is not independent ... party politics intervenes in hiring processes of personnel," he says.

ERT soon had too many employees — and no independence, he says. So two years ago, Mossialos introduced a plan to appoint an independent board and hire staff on merit. But the New Democracy Party that's now the main partner in the coalition government — the party that just shut down the network — shut down his proposal.

"It was unprecedented within the Greek political climate to argue in favor of independence," he said. "It did not go over well."

Mossialos says Greece is in desperate need of independent media. Most private stations and newspapers are owned by rich businessmen who strongly influence coverage. Some journalists even work for the same banks and ministries they cover.

Back at ERT headquarters, classical music plays from speakers in the first-floor hallway. Members of the ERT orchestra, who also lost their jobs, are preparing for an afternoon concert in support of the network. 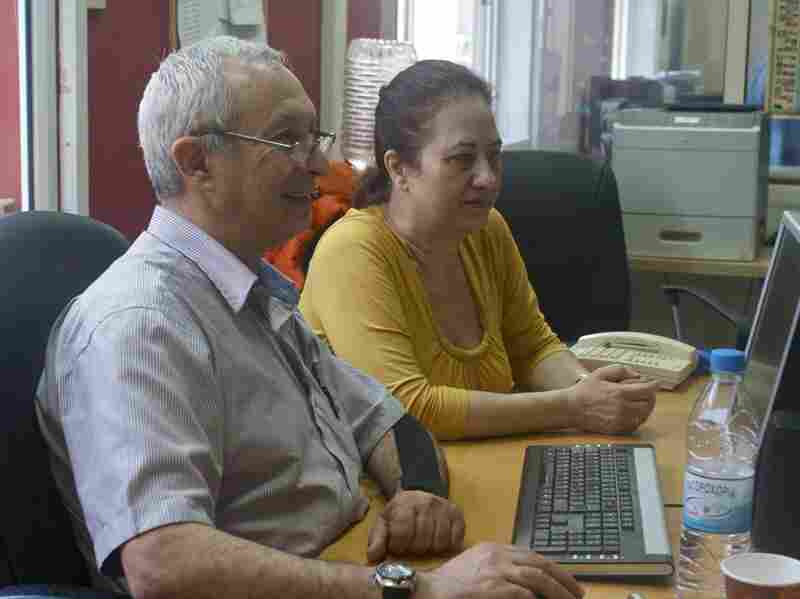 ERT foreign editors Tassos Ioannides (left) and Glykeria Kyriakidou, who lost their jobs as part of the shutdown, scan the news wires. European public broadcasters such as Tele Bruxelles in Belgium are airing ERT programming to protest the shutdown. Joanna Kakissis/NPR hide caption 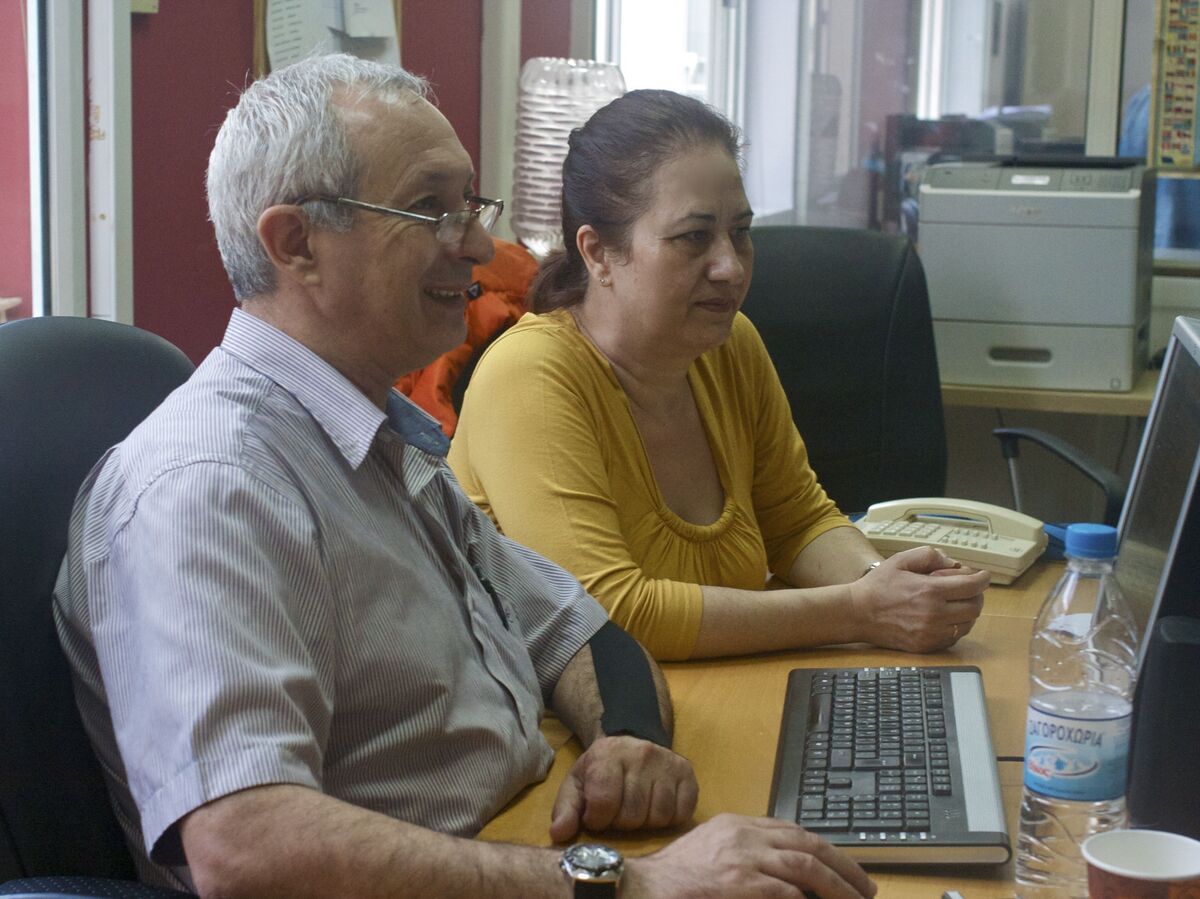 ERT foreign editors Tassos Ioannides (left) and Glykeria Kyriakidou, who lost their jobs as part of the shutdown, scan the news wires. European public broadcasters such as Tele Bruxelles in Belgium are airing ERT programming to protest the shutdown.

Tassos Ioannides, a foreign editor, listens and smiles sadly. He's had a good career here: He speaks four Balkan languages and covered the Yugoslav wars for Greek newspapers before joining ERT in 1998.

Ioannides says he got his job through an application process, not by promising to support a politician.

His colleague Dimitris Apokis, a former foreign correspondent, says plenty of ERT employees got their jobs through merit. But he agrees with reformers that the public sector must be drastically restructured and modernized to cut out cronyism.

"I don't think that you will find a serious and thoughtful person in Greece who will say something different," he says. "This is the main problem" in Greece.

But he also says that closing ERT and reopening it with a tiny staff — as the government plans to do — is too harsh. The move will fire more than 2,000 employees. That's how many civil service jobs the country's creditors want cut by the end of the summer.

The network's employees are the first civil servants to be fired in Greece in years. They face an unemployment rate of more than 27 percent, the highest rate in the eurozone.

That's why Despina Georgiou is camped out at the desk where she's answered phones for nearly 30 years. She says she won't leave.