Accessibility links
'Days Of Rambo Are Over': Pentagon Details Women's Move To Combat : The Two-Way The U.S. military said in January that it will end its front-line combat exclusion for women; the shift means that women could join elite forces such as the Army Rangers and Navy SEALs in the next three years. 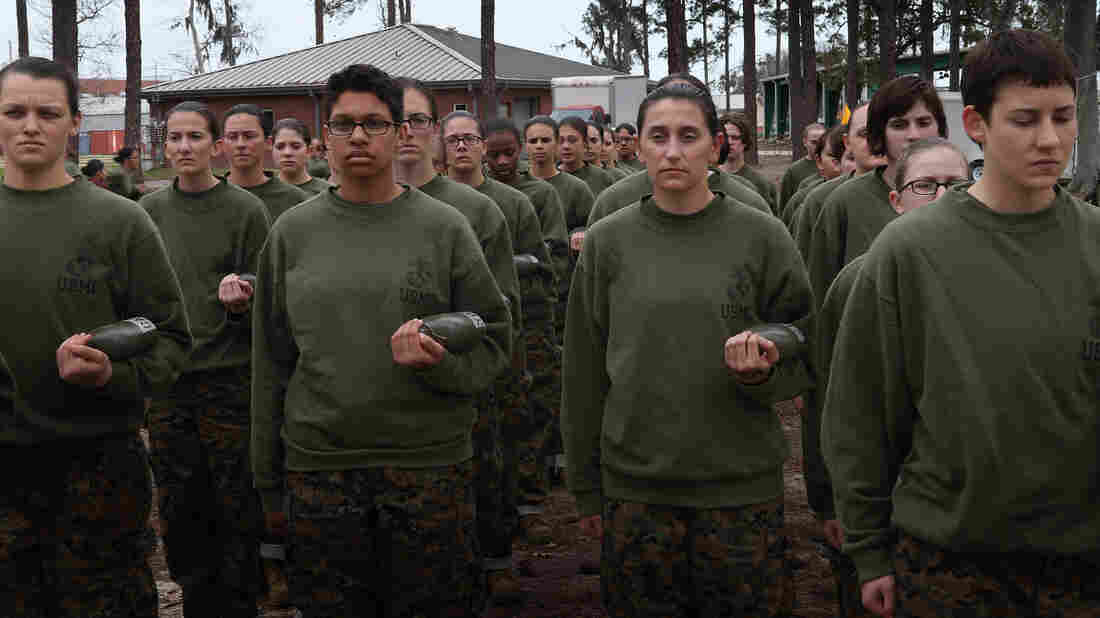 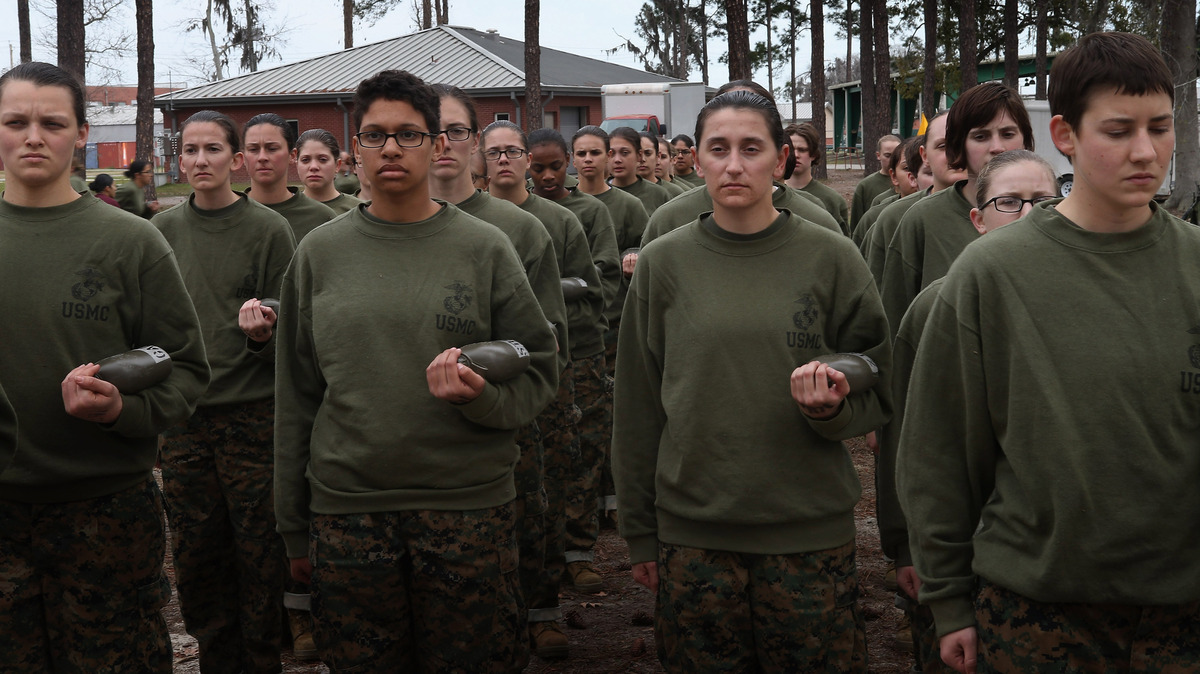 Women in the U.S. military will be integrated into front-line combat units by 2016, the Pentagon says. Here, female Marine recruits stand in formation during pugil stick training in boot camp earlier this year at Parris Island, S.C.

Women in America's armed services will have new options for what units they can join in coming years, the Pentagon says. The military said in January that it will end its combat exclusion that set a minimum size for units in which women could be deployed; the limit kept many women away from front-line combat units. The shift means women could join elite forces such as the Army Rangers and Navy SEALs.

Depending on the job, women could begin training to join combat units in the next one to three years, according to several military officers who spoke at a Pentagon briefing Tuesday afternoon. Integration into special forces units is expected to take the longest.

"The days of Rambo are over," said Maj. Gen. Sacolick, of the U.S. Special Operations Command Force Management Directorate. Noting that special operations groups are looking for people who can learn other languages and be deployed in a variety of situations, he added, "The defining characteristic of our operators is their intellect."

The change is expected to come slowly, with women not expected to begin training to join ground front-line combat units until at least 2014 or later. Defense Secretary Chuck Hagel has set a deadline of Jan. 1, 2016 for all positions to be open. Neither Hagel nor the top-ranking officers in military's branches attended Tuesday's media briefing.

Branches of the service are developing gender-neutral tests that will be tailored to their units, and they may request a special exception to the policy shift if they find that their female members can't perform the duties of a specific job.

For instance, Marine Lt. Col. Jon M. Aytes spoke of a scenario in which a woman in an armored unit would be expected to be able to reload a 55-pound shell into the gun's breach, with little opportunity for leverage.

When asked later if the military would develop separate standards for men and women, Aytes and the other officers said no. Aytes noted that tanks don't have one rack of shells for men, and another for women.

In the case of special operations, men who are already serving in those units will be given a survey that's designed to gauge how they feel about women joining their ranks. It will also analyze "the social science impacts... of integrating women into small, elite teams that operate in remote, austere environments," according to the Special Operations plan submitted in March.

Saying that he had spoken to colleagues at other services about the matter, Sacolick added, "I can assure you, we are not predisposed to any course of action."

The major challenge, Sacolick says, is not how the female service members might perform on physical tests — he said he had been impressed by the physical abilities of female recruits. Instead, the largest hurdle could be handling the social and cultural changes, he said.

The news comes months after the Army, Navy, Air Force, and Marines submitted their plans for including women in ground combat positions. As NPR's Larry Abramson reported, the change could "open up more than 200,000 positions in the military" to women.

"I remain confident that we will retain the trust and confidence of the American people by opening positions to women, while ensuring that all members entering these newly opened positions can meet the standards required to maintain our warfighting capability," wrote Defense Secretary Chuck Hagel in May, after the branches of the service had submitted their plans. He told them, "I appreciate your efforts to methodically and deliberately remove gender-restrictive barriers."