Accessibility links
'Suffering On A Huge Scale': World Refugee Numbers Swell : The Two-Way The United Nations says more than 45 million people worldwide are refugees — the most since 1994 — and that nearly half are children. Fleeing Syrians are a growing concern. 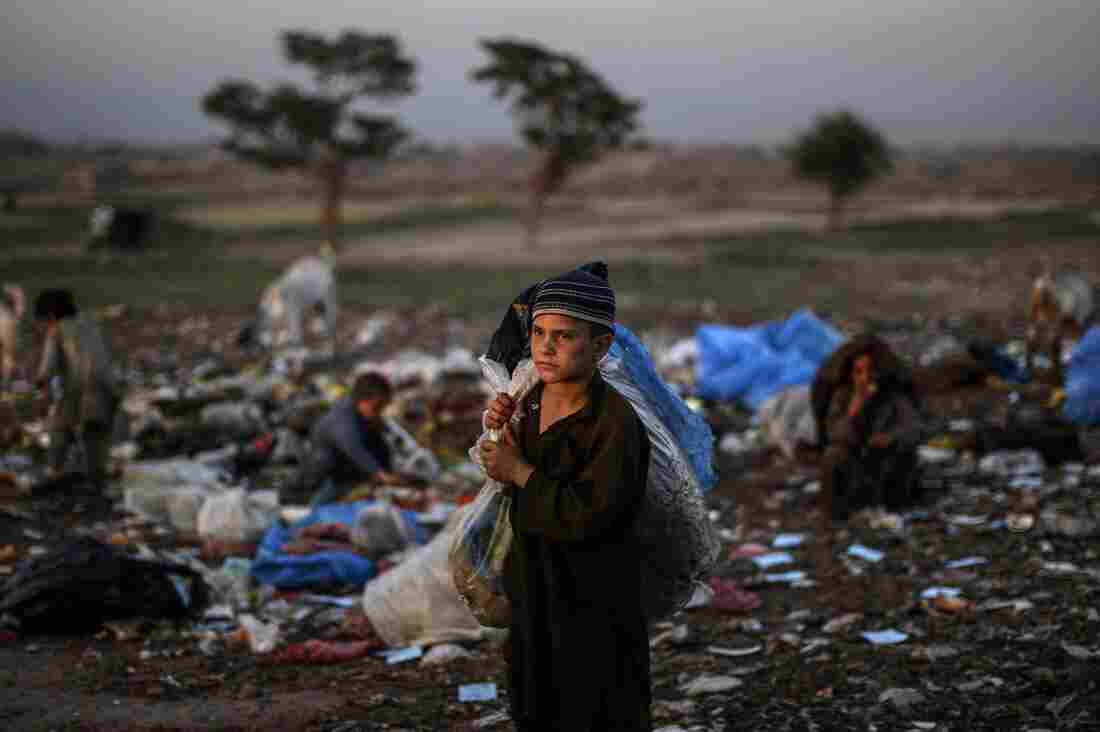 Afghan refugee children collect items of use from a pile of garbage on the outskirts of Islamabad, Pakistan. Muhammed Muheisen/AP hide caption

The United Nations Refugee Commission says more than 45.2 million people were in "situations of displacement" around the world as of last year — the most since 1994.

A report from the Office of the United Nations High Commissioner for Refugees says there were 15.4 million refugees in other countries, 937,000 people seeking political asylum and 28.8 million people forced out of their homes but still inside their own countries.

"Those are the highest numbers since 1994, when people fled genocide in Rwanda and bloodshed in former Yugoslavia," according to The Associated Press.

The U.N.'s yearly Global Trends report says most people are running away from war. "A full 55 percent of all refugees listed in UNHCR's report come from just five war-affected countries: Afghanistan, Somalia, Iraq, Syria and Sudan," it states. Millions are also on the move in Mali and the Democratic Republic of the Congo.

"These truly are alarming numbers. They reflect individual suffering on a huge scale and they reflect the difficulties of the international community in preventing conflicts and promoting timely solutions for them," said António Guterres, head of UNHCR.

Nearly half of all refugees were children. The U.N. says 21,300 children who sought asylum were alone or separated from their parents — a record high.

The country producing the greatest number of refugees is Afghanistan: The agency says that "on average, one out of every four refugees worldwide is Afghan, with 95 percent located in Pakistan or Iran."

Next is Somalia, followed by Iraq and then Syria, an area of growing concern. Because the report covers only 2012, it counts 471,400 Syrian refugees — and none from this year. Syrians are now fleeing in greater numbers, prompting the U.N. to label that country's civil war "a major new factor in global displacement."

Another concern is who is hosting all these refugees. The U.N. says it is poorer countries: "In all, developing countries host 81 percent of the world's refugees compared to 70 percent a decade ago."

The U.N. also says the 28.8 million displaced people represent the highest number in more than 20 years. Again, Syria is listed as a significant new contributor to this problem, along with the Democratic Republic of Congo.