Accessibility links
A Plaque And A Flag: U.S. Tries To Rescue Taliban Peace Talks : The Two-Way U.S. officials promised to remove a nameplate and flag from the Taliban office in Qatar. But the Afghan government remained furious and committed to staying out of the talks.

A Plaque And A Flag: U.S. Tries To Rescue Taliban Peace Talks

A Plaque And A Flag: U.S. Tries To Rescue Taliban Peace Talks 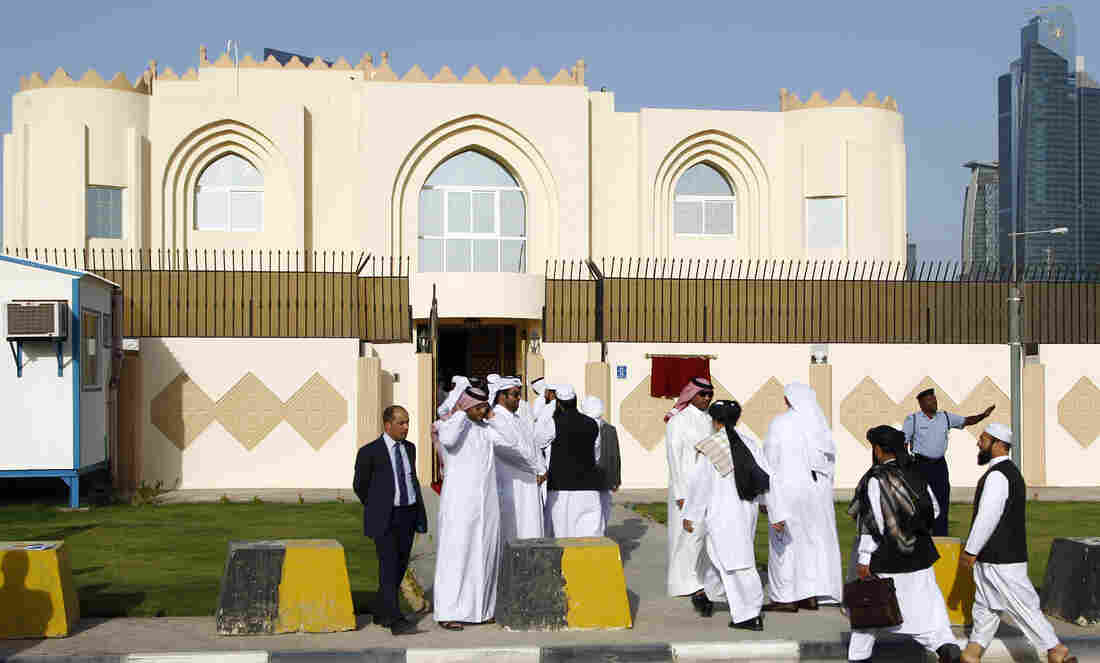 How hard will peace negotiations in Afghanistan be? For the past day — and before the first official meeting — the United States has been scrambling to get all parties to the table.

The talks were scheduled to begin today in Qatar, but now they are on hold.

As we told you, Afghan President Hamid Karzai abruptly pulled out of the negotiations complaining that the newly-opened Taliban office in the Qatari capital of Doha overstepped its role.

CBS News reports the State Department said the reason behind the anger was a flag and a nameplate. CBS reports:

"The Afghan government was furious that the Taliban flew a white flag and hung a sign outside the office that described it as the representative of the Islamic Emirate of Afghanistan, the name of the old Taliban government. It was supposed to be called the Political Office of the Afghan Taliban, according to State Department spokesperson Jen Psaki.

"American officials at the State Department have scrambled over the past 24 hours to ease Afghan concerns over what essentially amounts to a Taliban publicity coup. Psaki told reporters that [Secretary of State John] Kerry agreed with Karzai that the Taliban's actions were 'inappropriate.' U.S. officials scrambled to get the Qatari government to take down the offending flag and nameplate which the U.S. said were in violation of the previously agreed to proposal for the Doha office."

The BBC reports that Afghan officials said the removal of the plaque and flag were not enough.

"It is a kind of Taliban establishment which we don't want," Muhammad Ismael Qasemyar, a member of Afghanistan's High Peace Council, which was set up to negotiate peace with the Taliban, told the BBC.

In a separate development, the Associated Press is reporting that the Taliban are ready to free U.S. Army soldier Bowe Bergdahl, who has been held captive since 2009, in exchange for "five of their senior operatives imprisoned at Guantanamo Bay."

"The only known American soldier held captive from the Afghan war is U.S. Army Sgt. Bowe Bergdahl of Hailey, Idaho. He disappeared from his base in southeastern Afghanistan on June 30, 2009, and is believed held in Pakistan.

"In an exclusive telephone interview with The Associated Press from his Doha office, Taliban spokesman Shaheen Suhail said on Thursday that Bergdahl 'is, as far as I know, in good condition.'

"Suhail did not elaborate on Bergdahl's current whereabouts."

In announcing the talks, U.S. officials said they would discuss a prisoner swap with the Taliban.

The AP reports that an Afghan government spokesman said Karzai is willing to come to the negotiating table if the plaque and flag are taken down.