Accessibility links
As Protests Grow, Brazilian President Calls Emergency Meeting : The Two-Way Thursday was marked by violent demonstrations, vandalism and intense clashes with military police. While the demands of demonstrators were broad, they were united in their rejection of politics as usual. 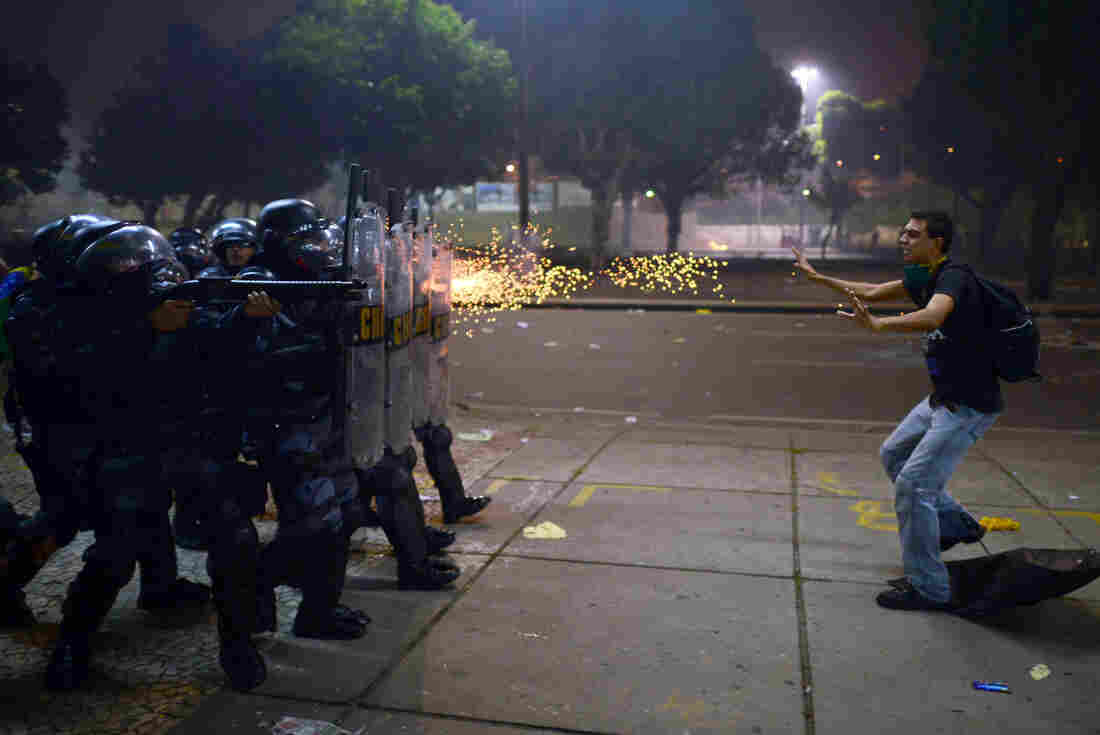 A demonstrator is shot by a rubber bullet as anti-riot police officers charge during a protest Thursday against corruption and price hikes in Rio de Janeiro. Christophe Simon /AFP/Getty Images hide caption 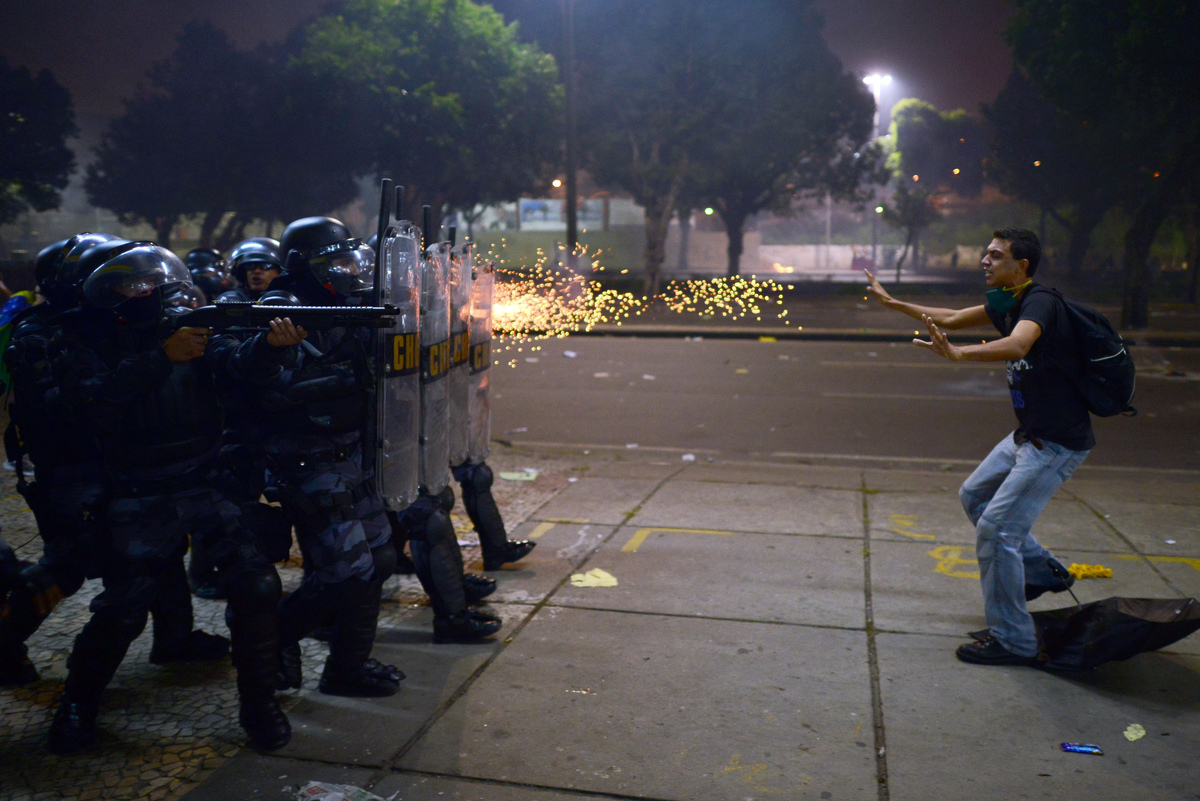 A demonstrator is shot by a rubber bullet as anti-riot police officers charge during a protest Thursday against corruption and price hikes in Rio de Janeiro.

By some estimates, about a million people marched in cities across Brazil on Thursday, airing a wide array of grievances. As O Globo frames it, it was a day marked by violent demonstrations, vandalism and intense clashes with military police.

In Brasilia, the country's capital, about 60,000 people took to the streets, according to O Globo. Three people were arrested, 39 were injured and the country's Foreign Ministry was "left in a state of destruction."

"There is a lot of broken glass on the floor and garden lights and metal frames were thrown inside through a broken back door," the newspaper reports.

The Associated Press says one person in São Paulo state was killed "when a car rammed into a crowd of demonstrators, after the driver apparently became enraged about being unable to drive along a street."

Brazilian President Dilma Rousseff, who has praised protesters, scheduled an emergency cabinet meeting for this morning.

O Globo says Rousseff wants to "analyze the situation in the country" and determine how the government can contain violent protests.

As we've reported, the protests started over a price hike on public transportation, but quickly broadened and became about everything from government corruption to the government's focus on the upcoming World Cup and Olympics. After the first wave of mass protests, some local governments relented, lowering the price of bus and metro tickets or promising to hold talks about them.

But, Reuters reports, protesters were undeterred by the overture:

" 'Twenty cents was just the start,' read signs held by many converging along the Avenida Paulista, the broad avenue in central São Paulo, referring to the bus fare reductions. Police there said 110,000 people lined the avenue."

In its piece this morning, The New York Times concentrates on the amorphous nature of this movement. The paper compares it to the protests that flared in the United States around the Occupy Wall Street movement.

"The mass protests thundering across Brazil have swept up an impassioned array of grievances — costly stadiums, corrupt politicians, high taxes and shoddy schools — and spread to more than 100 cities on Thursday night, the most yet, with increasing ferocity.

"All of a sudden, a country that was once viewed as a stellar example of a rising, democratic power finds itself upended by an amorphous, leaderless popular uprising with one unifying theme: an angry, and sometimes violent, rejection of politics as usual."

Marcelo Hotimsky, a philosophy student and a protest organizer, told the paper: "The intensity on the streets is much larger than we imagined. It's not something we control, or something we even want to control."

Rousseff has promised to effect change in the country, NPR's Lourdes Garcia-Navarro reports.

"Rousseff promised that 100 percent of Brazil's oil revenue will be devoted to education, that doctors will be imported from abroad to help with the shortage in health professionals, and that public transportation will be improved," Lourdes tells our Newscast Desk.

Rousseff also said she would discuss other measures in a meeting with Brazil's governors and big-city mayors. Lourdes adds:

"It was a speech meant to placate, but she also warned that protesters who vandalize public property won't be tolerated. ... It remains to be seen whether this speech will diffuse what has become a challenge to her leadership."

Lourdes was at the protest that wound its way across São Paolo on Thursday. She said as these protests began, one question was, whether they had legs.

"The answer is those legs are running," Lourdes reported.

The bigger question is where are they running to.

Lourdes spoke to several protesters and she heard a variety of answers. The common thread, she said, is that the "traditional pillars of society — the government, the media — don't speak to their needs."