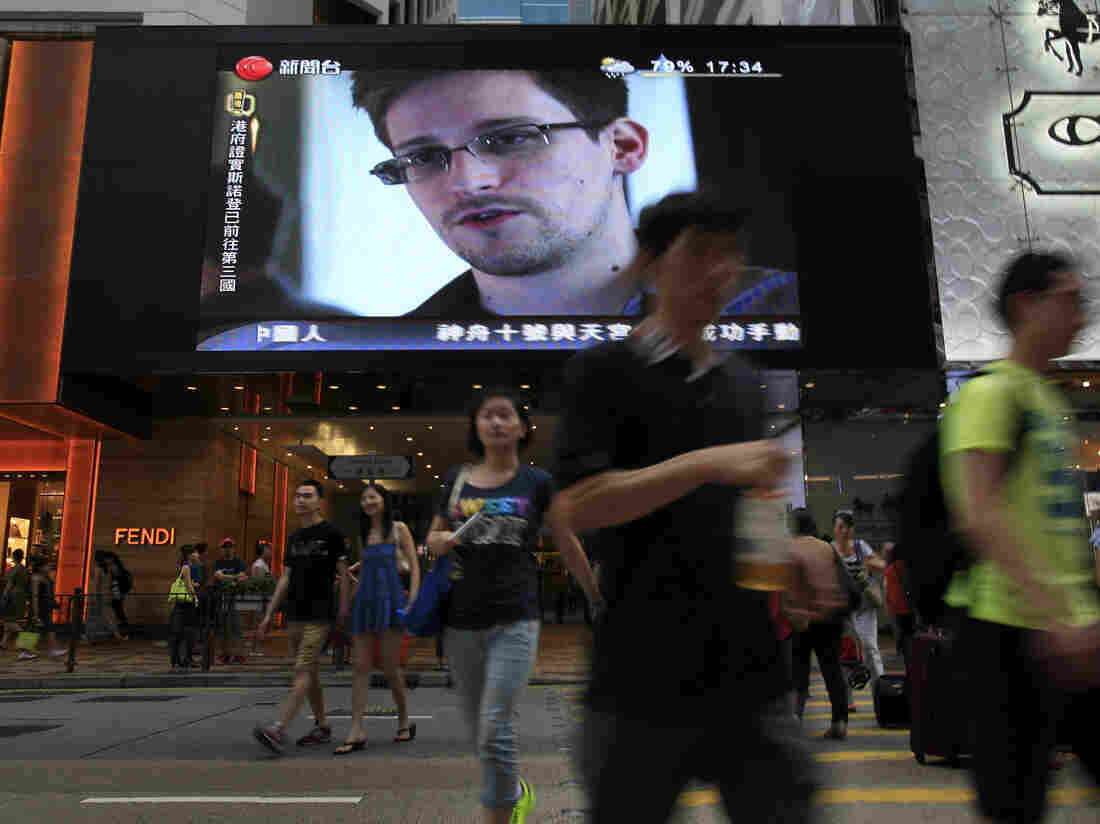 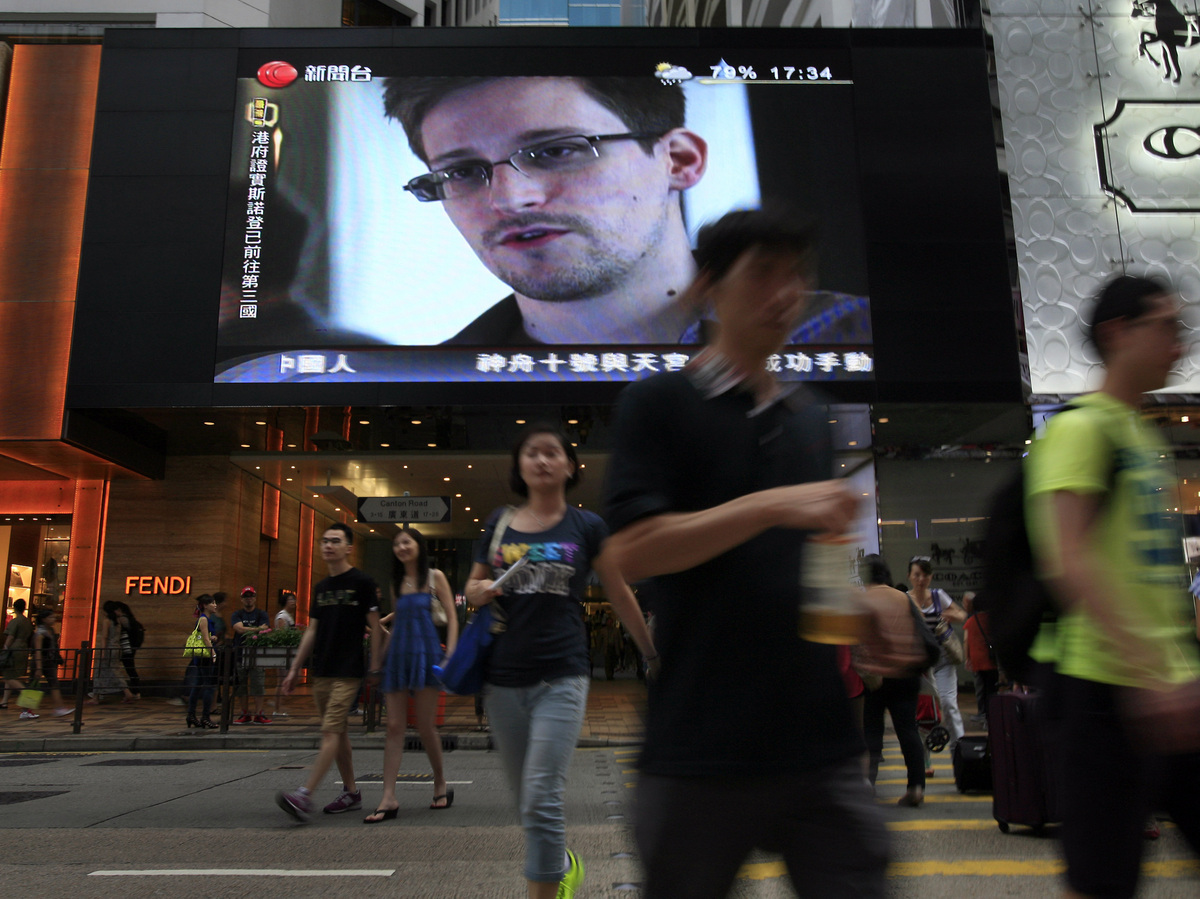 A TV screen shows a news report of Edward Snowden at a shopping mall in Hong Kong on Sunday.

Snowden left Hong Kong earlier Sunday bound for a "third country," the government in the Asian hub said. He later landed in Moscow.

Ecuadorian Foreign Minister Ricardo Patino Aroca, who is on an official visit to Vietnam, said:

The Government of Ecuador has received an asylum request from Edward J. #Snowden

Earlier, Russia's ITAR-Tass news agency quoted an unidentified official from Aeroflot as saying Snowden would fly to Moscow and from there to Cuba on Monday, with an ultimate destination of Caracas, Venezuela. The anti-secrecy group WikiLeaks also said it was giving Snowden legal counsel and had helped him leave Hong Kong.

The government of the Hong Kong Special Administrative Region, or HKSAR, said in a statement that Snowden departed the territory "on his own accord for a third country through a lawful and normal channel." It did not say what his destination was.

CNN had a camera trained on the arrival area in Moscow for the Aeroflot flight Snowden was believed to be on, but there was no sign of him. However, The New York Times reported that other passengers on the plane said a black car pulled up on the tarmac after the flight landed; Russia Today, Russia's English-language television station, later reported that the car belonged to the embassy of Ecuador.

On Saturday, the U.S. asked Hong Kong, a semi-autonomous Chinese territory, for Snowden's extradition after federal prosecutors filed a criminal complaint last week charging him with espionage, theft and conversion of government property in connection with leaks to The Guardian newspaper about secret U.S. electronic surveillance programs.

June 5: The U.K.-based Guardian newspaper reports that the National Security Agency has been collecting telephone metadata of U.S. customers of Verizon.

June 6: In its second expose on secret U.S. electronic surveillance efforts, the Guardian reports on a 'highly classified' program called PRISM that allows the NSA access to servers of Microsoft, Google, Apple and other leading tech companies to collect emails and other data.

June 9: The Guardian identifies Edward Snowden, a former NSA contractor, as the source of the leaks of classified information behind its exclusive reports. The newspaper says Snowden asked that his name be made public, and links to a video of the 29-year-old consultant justifying his actions. The newspaper says Snowden has taken refuge in Hong Kong.

June 20: The Guardian reports that special Foreign Intelligence Surveillance Act, or FISA, courts gave permission to the NSA to retain "inadvertently acquired" domestic communications "if they contain usable intelligence, information on criminal activity, threat of harm to people or property, are encrypted, or are believed to contain any information relevant to cybersecurity."

June 21: Federal prosecutors file a criminal complaint against Snowden, charging him with espionage.

June 22: The U.S. makes a formal request to Hong Kong to hand over Snowden for prosecution under the terms of a 1998 extradition treaty between Washington and the Chinese territory.

June 23: Snowden leaves Hong Kong on a plane that transits through Moscow, but his ultimate destination remains unclear.

Despite the extradition request, the HKSAR government said that documents from the U.S. asking for a provisional arrest warrant "did not fully comply with the legal requirements under Hong Kong law."

Hong Kong said it had asked the United States to provide additional information, but "has yet to have sufficient information to process the request for provisional warrant of arrest, [so] there is no legal basis to restrict Mr. Snowden from leaving Hong Kong," according to the statement.

Hong Kong said it had informed the U.S. of Snowden's departure.

"We will continue to discuss this matter with Hong Kong and pursue relevant law enforcement cooperation with other countries where Mr. Snowden may be attempting to travel," Chitre said.

State Department spokeswoman Jen Psaki would not specifically confirm reports that Snowden's U.S. passport had been revoked, but said the practice was "consistent with U.S. regulations ... for persons with felony arrest warrants."

"Such revocation does not affect citizenship status," Psaki said. "Persons wanted on felony charges, such as Mr. Snowden, should not be allowed to proceed in any further international travel, other than is necessary to return him to the United States."

A State Department official said the U.S. has been in touch with countries in through which Snowden might transit or that could serve as "final destinations."

WikiLeaks — whose founder, Julian Assange has taken refuge in Ecuador's London embassy to avoid extradition to Sweden on sex crime allegations — said on its Twitter feed that it was assisting Snowden.

In a later statement, Wikileaks said Snowden "is bound for the Republic of Ecuador ... for the purposes of asylum."

The Sydney Morning Herald quoted Assange as saying that he had "great personal sympathy for Ed Snowden's position" and that he was "thankful to the countries that have been doing the right thing in these matters."