Accessibility links
Texas Lawmaker's 11-Hour Filibuster Ended On A Technicality : The Two-Way She stood and spoke for nearly 11 hours straight, but Democratic Texas state Sen. Wendy Davis' filibuster was stopped by points of order. But the effort wasn't in vain — the clock ran out on the bill's final passage. 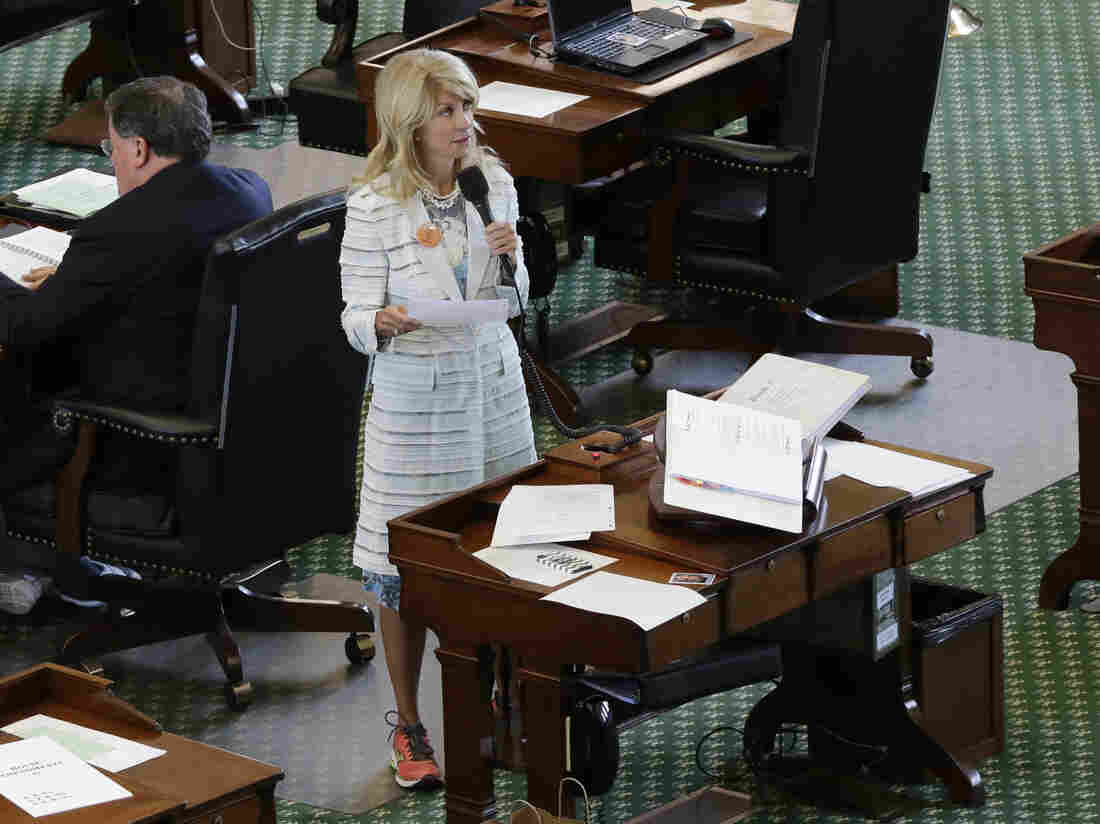 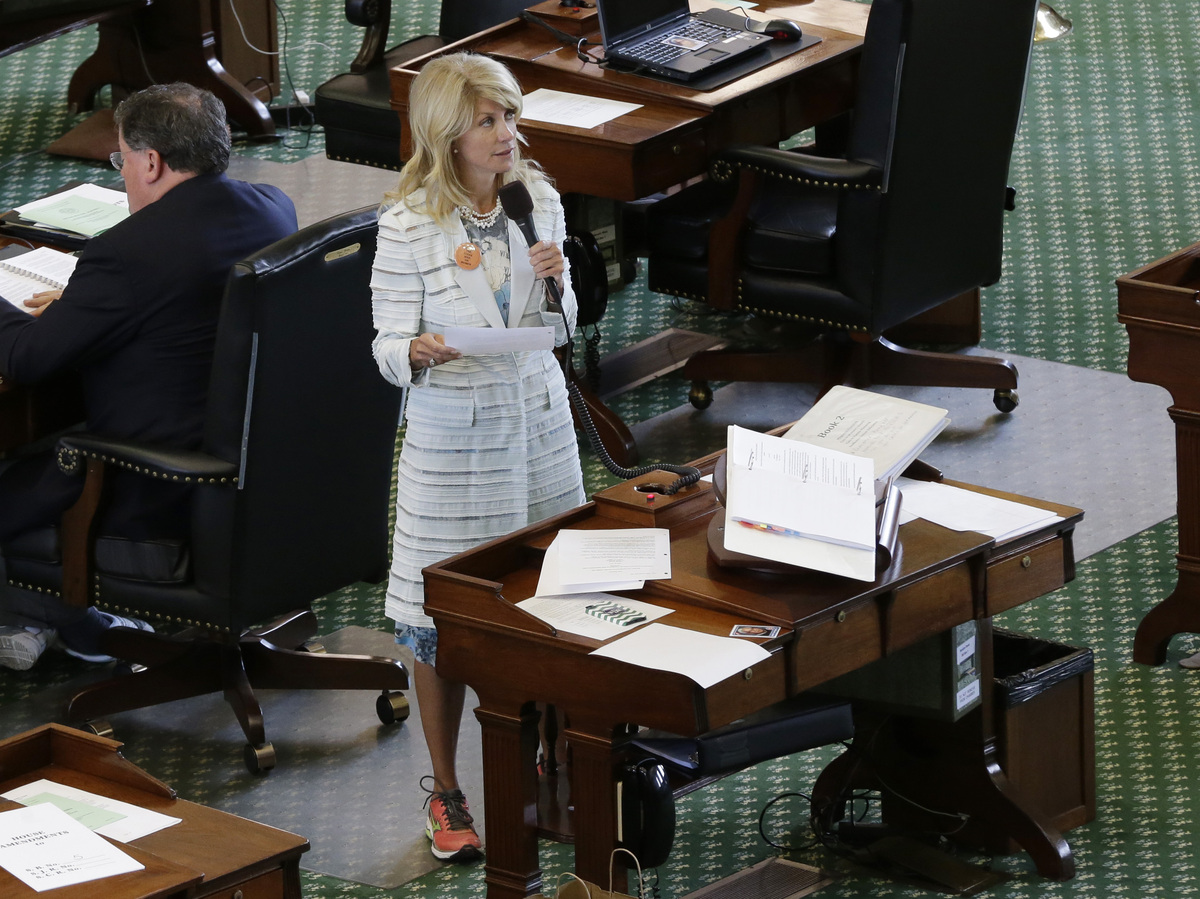 By midnight Texas time, it was all over but the parliamentary inquiries. After a nearly 11-hour filibuster attempt by state Sen. Wendy Davis to block sweeping restrictions on abortion, the Republican-dominated Texas Senate successfully shut down the filibuster on points of order. (See update at the bottom of this post.)

Gov. Rick Perry says lawmakers will take up the abortion legislation and other measures on Monday, as he calls for a special session of the Legislature.

Davis stood and spoke continuously for nearly 11 hours in an attempt to block passage of SB 5, a bill that would ban all abortions after 20 weeks and could effectively close all but five abortion clinics in the state. Supporters say the new, stringent standards raise the level of care for Texas women. The majority of Texas voters polled have shown support for restrictions on abortion.

The dramatic restrictions in the bill had already drawn national attention for their reach. But her riveting, one-woman attempt to stop it put Wendy Davis' name on the national map. A single mother at 19 who raised her children while putting herself through Harvard Law School, Davis has represented a Fort Worth swing district in the Texas Senate since 2008. To catch a glimpse of her, the line outside the Texas Senate gallery wound down three floors of the Texas Capitol for hours. President Obama tweeted a link to the livestream, saying, "Something special is happening in Austin tonight." Fueled by a popular Twitter hashtag, #standwithwendy, more than 100,000 people were still watching a parliamentary debate over Roberts Rules of Order on the livestream at midnight.

Davis' chair was removed before she began speaking at 11:18 a.m. CT Tuesday. Donning pink tennis shoes, she started by saying, "I'm rising on the floor today to humbly give voice to thousands of Texans who have been ignored. These voices have been silenced by a governor who made blind partisanship and personal political ambition the official business of our great state."

Had the filibuster continued until midnight, Davis would have blocked the controversial abortion bill from passage because the Legislature's special session was constitutionally required to come to a close by then. A successful filibuster would have prevented the Senate from getting a chance to take a final vote on the bill. 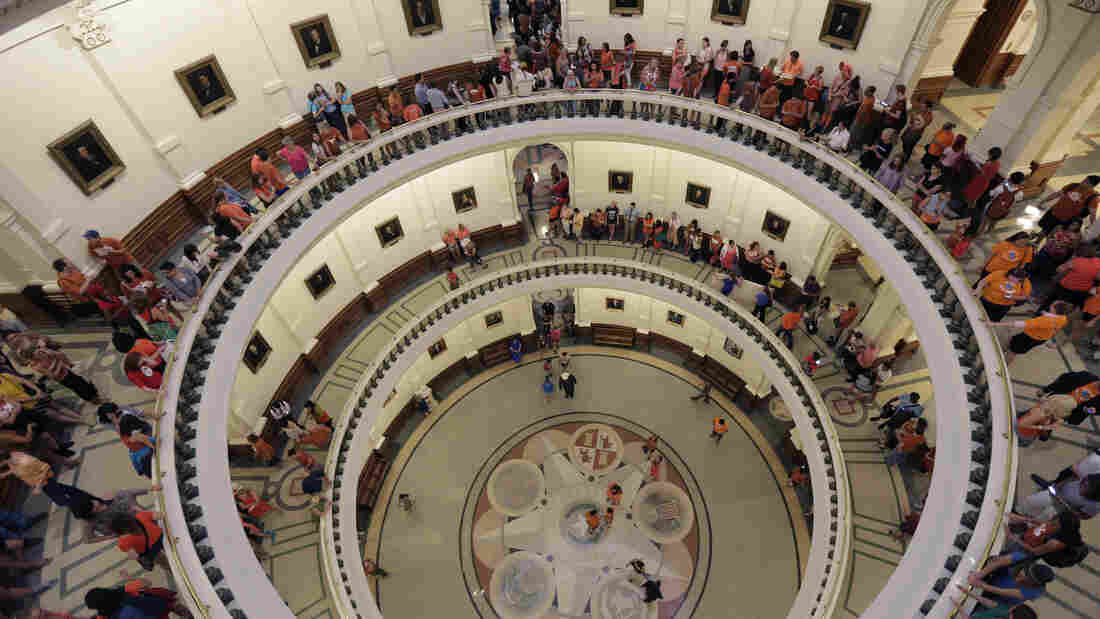 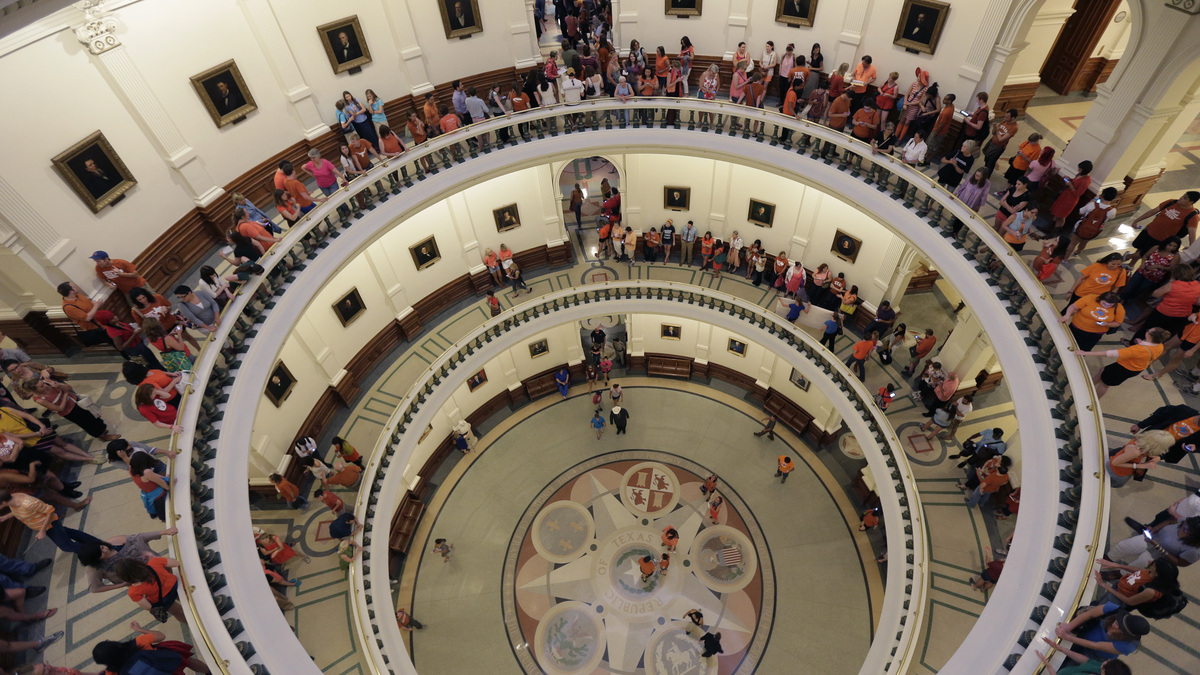 The line to enter the Senate chamber spills into multiple levels of the Texas Capitol rotunda as state Sen. Wendy Davis filibustered an abortion bill in Texas.

The quirky filibuster rules in Texas made Davis' attempt both fascinating and perilous. In Texas, lawmakers aren't allowed to lean on a desk or chair during a filibuster and everything discussed while speaking continuously must be germane — you can't talk about topics unrelated to the bill. Anything deemed not germane is subject to a point of order, and Davis went up against a three-strikes-you're-out-rule on those points. In the seventh hour of her filibuster, Davis donned a back brace, but state Sen. Tommy Williams, a Republican, called a point of order on it. She had to lose the brace and take a strike. And the third strike was for speaking about a sonogram bill, which sounds related but the chair sustained the point of order on germaneness, and it ended her filibuster attempt.

Wildly outnumbered in the Texas Legislature, Democrats didn't have the votes to beat back the bill earlier in the special session. Republican Gov. Rick Perry added abortion bills to the special session's allowed bill topics late in the game, which created the opportunity for Democrats to try to run out the clock and stop the bill from final passage before the session ended at midnight Tuesday night.

Republicans in Texas hailed the bill's earlier passages in the legislative process as wins for women's health. But Texas Monthly's longtime political scribe Paul Burka wonders whether the national attention on the legislation — and the very public fight to stop it — could be a victory for Democrats in the long run. He writes, "The more Republicans take actions that are anathema to younger women, the more we will hear from Democrats about the Republican War against Women. In the age of the Internet and the social media, it is impossible to build a wall around Texas."

Update 4:05 a.m. CT: The clock ultimately ran out on the controversial bill, with Republican leadership in the Senate conceding that the final vote on the bill's passage happened after the constitutionally mandated midnight end to the session.